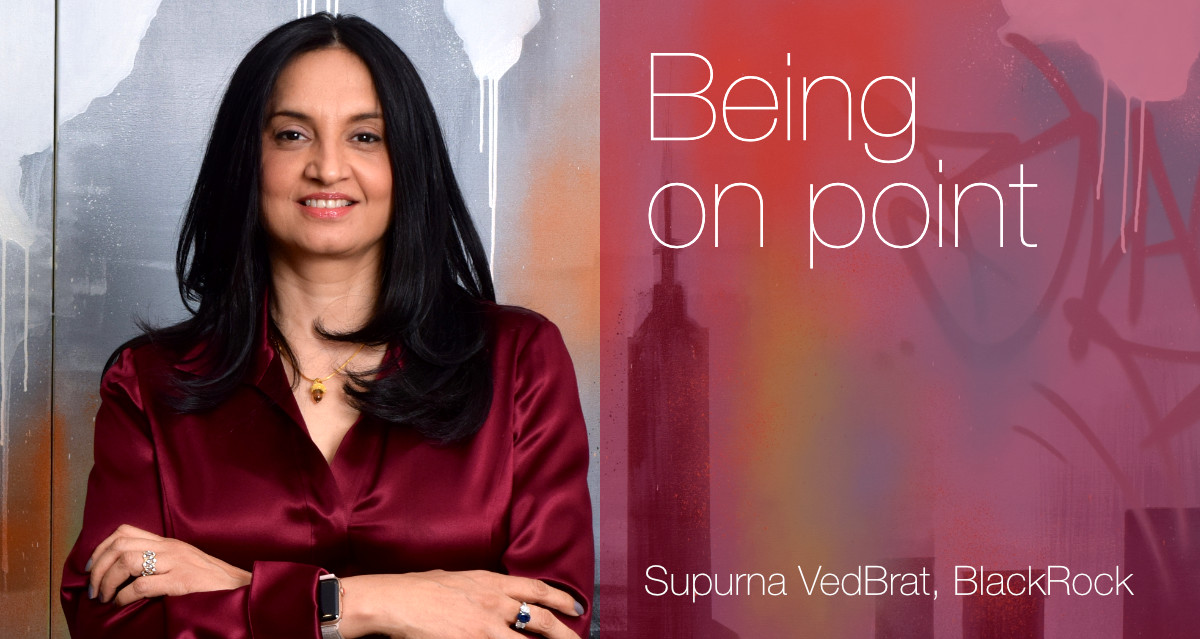 Although Supurna VedBrat, Global Head of Trading at BlackRock, did not anticipate a Covid-19 event she had the wealth of experience, emotional intelligence and communication skills to not only help navigate her team through the volatility of the last year but also develop a roadmap for the future.

“What the pandemic taught us is the importance of being prepared for the unexpected,” says VedBrat, “There is a healthy paranoia at BlackRock, and within trading we know that in general not everything will work as planned all the time. The difference this time around was the dramatic speed of change and the decentralisation of the work environment, not just for us at Blackrock but also for the rest of the industry.”

Strategic thinking though is at the heart of VedBrat’s role, and she had helped lay the groundwork that meant her team did not miss a beat in terms of keeping the execution side of the business smoothly running. Markets had been undergoing their own transformation long before the virus became a household name. Since the financial crisis, ongoing regulation, splintering liquidity and a move to multi asset class trading was already shaping VedBrat’s game plan in creating a more dynamic and agile framework that could adapt to shifting conditions but also leverage new opportunities.

“Strategic thinking is a big part of my day-to-day job, including to ensure that BlackRock has business models that keep evolving as technology and liquidity changes,” she says, adding that over the past few years, traders have rotated among the different asset classes to broaden their horizons and sharpen their skills. In addition, they have become well versed in the latest algos, tools and techniques.

VedBrat notes that the firm has invested time and money in corralling the mountains of data in order to generate more actionable insights. “We are constantly doing research into how data science and artificial intelligence can help us augment human intelligence with computing, and to do so at scale,” she says. “I think going forward it is going to materially change trading strategies that the buyside uses, but today from a risk perspective what we are seeing are better outcomes.”

Although technology has been a significant enabler before and during the pandemic, VedBrat believes that the importance of relationships internally and externally should not be underestimated. She credits the strong ties that have been forged over the years with various counterparties, including exchanges, trading venues, electronic communication networks and other market participants, as one of the main reasons for her team’s success this past year. As she puts it, they were “critical components in sourcing the best channels and keeping the liquidity flowing even during the most volatile times.”

She also attributes the achievements to her team’s collegiate nature and forged strong bonds which made working remotely easier, although no one expected that the situation would have lasted for over a year. “If you asked me last January if I would be comfortable with traders working from home, I would have said no,” she adds. “However, there has been acceptance of a more flexible working environment across the financial services industry, and there has been a greater emphasis on health and well-being of employees across the board. In some ways the use of Zoom, WebEx and other channels has democratised the room because everyone is on screen and contributes. This may not have been the case in face-to-face meetings where not everyone may have been in the room.”

As to the long-term impact, she notes “it is too early to determine what the final outcome will be as it depends on a firm’s infrastructure, but I think we will see more of a hybrid model emerging. In the long run this will be a positive for work-life balance.”

What will not change going forward is the high priority VedBrat’s places on recruiting people from a wide variety of backgrounds. “Talent management is a big part of my job because from my perspective, people are our most valuable asset,” she adds. “We are trading on a global scale across all asset classes and geographies, and I like having teams with diversity of thought and from different backgrounds. From a risk management perspective, we also operate on a culture of escalation where if someone has a problem, they are encouraged to escalate it, so it can be addressed quickly.”

VedBrat learned the value of diversity during her own career path. Although video game design might have been on the table as a potential career when she was studying mathematics at Delhi University in India, and computer science at Rutgers University, VedBrat took a different path. She first joined IBM as a software engineer in IBM’s research centre before spending almost five years at Lehman Brothers in derivatives sales and structuring, and slightly over two years at ING in emerging market sales.

“I wanted to live in Manhattan at the time and working on Wall Street seemed like the sensible option,” she adds, “I didn’t study finance but am a true believer that math is a solid foundation for whatever you want to do. I joined Lehman Brothers and eventually moved to London where I joined ING. The international experience and ability to work in different regions helped me become a better strategic thinker and manager. It increases sensitivity and you are much more aware of the different ways to solve a problem.”

Upon her return to New York, VedBrat held senior positions at Bank of America in New York but in 2009 decided to set up her own company – Strategic Solutions Consulting – where she advised a multitude of market participants on a wide range of issues emanating from greater regulation and volatile markets emanating from the financial crisis.

VedBrat was also a young mother who wanted a more balanced work-life situation and greater control of the quality of projects. However, as she puts it, “I was fortunate to have a variety of skillsets that I could use to help clients, which is why I always encourage younger people to build a diverse set of skills because it gives you optionality as you go through the different stages of your career and life.”

Diversity in general has been a theme for VedBrat who is a member of the board of Women in Derivatives (WIND), a non-profit organisation dedicated to developing female leaders in the financial services industry, as well as a member of BlackRock’s Women’s Initiative & Allies Network (WIN) and BlackRock’s Global operating committee.

“We have made progress – when I first started, I was one of three women on a trading floor,” she adds. “I think the younger people who have entered the workforce today are gender blind, which is a good thing. BlackRock is also building programmes that do not just focus on diversity but also on inclusion and on making people much more aware of their unconscious biases. “

In general, “I think everyone has had some form of challenges in their careers but the point for me is moving forward and recognising that sometimes getting from A to B is not direct,” she adds. “I hear the voice of my father who said sometimes you need to take a path around an obstacle and not be discouraged. Do not let the challenges weigh you down and stay true to your values. Find strength from your successes to get through your challenges. When I look back at my career, my past experiences and broad set of skills have enabled me to do the job I am doing today and have been instrumental in helping me build a collaborative and productive team.”