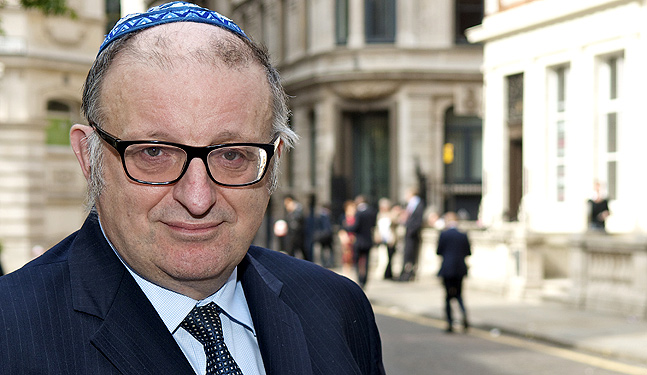 HEADS IN THE SAND.

Silvano Stagni, group head of marketing & research at Hatstand, points out that MiFID II and MiFIR are only 24–30 months away, and explains why you should be thinking about them now.

ESMA is currently working on the first draft of technical standards for MiFID II and MiFIR. According to their published MiFID II timeline*, the relevant consultation papers will be ready towards the end of 2014, and the consultation period should last till March 2015.

It will be a longer consultation than the one ending 1st August this year. The questions considered then were included in two documents – a consultation paper and a discussion paper – covering both the Directive (MiFID II) and the Regulation (MiFIR). Respondents had to read and absorb 844 pages in a relatively short time in order to formulate responses that would be eligible for consideration by the supervisory agency.

In fact, not many responses were received, and many people commented on the difficulty of meeting the deadline.

It is interesting to look at who the respondents were, especially in the United Kingdom, the country with the largest financial industry in Europe.

ESMA identified 11 categories of respondents. The table below shows responses from the EU as a whole. 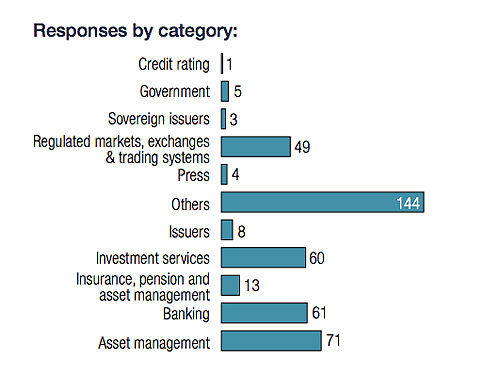 Looking at the responses from the UK on its own paints a slightly different picture: 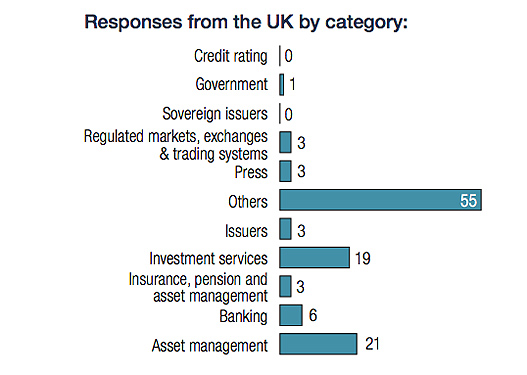 The MiFID Review will probably become effective two bonus cycles away, so if the industry chooses not to engage it does so at its own risk.

Judging from past experience, ESMA listens to constructive criticism during consultations. If enough respondents raise substantiated and well presented objections, they usually listen. This is not the only reason to start thinking of MiFID II and MiFIR at such an early stage.

Extending best execution to non-equity instruments involves more than just writing a bunch of reports. Just by looking at the high level of detail discussed in the text of the Directive and the Regulation approved by the European Parliament last April, there are a lot of strategic decisions that will need to be taken, decisions that may affect the business model of institutions. For instance:

Negotiated trades will be very limited and they will have to be operated in an environment run by an exchange. There could be other ways to allow, ‘de facto’, some form of crossing clients’ orders. Whatever happens, though, this model will have to change; how and when cannot be decided quickly, and involves more than implementing systems.

• Obligation to trade on exchange

This is more than a standardisation of instruments and changes to the reference data. Existing operators of trading platforms will have to decide whether to operate their own exchange – in other words whether to register as an OTF. Operators of messaging-based trading platforms will have to provide transaction data in a way that is not possible from a pure messaging-based system. Will they buy or build a new trading system or will they ‘bolt on’ a module on the existing system that will capture the information required?

The overall hassle of trading will increase. Marginal activities may no longer be profitable. Looking at what is happening across the pond with Dodd-Frank, it appears that a number of institutions have stopped trading some financial instruments but other institutions have picked up the slack. What will you decide to do?

Last but not least: more instruments traded on exchange and more trading venues mean more market data. Are you ready for an explosive growth in volume and data type? Market data are expensive, and preparing for the new trading environment will mean more than cleaning a database. There are contracts to consider, and potential renegotiation may take more time than that between acquiring a reasonably stable set of technical standards and kick-off date.

These examples are, by no means an exhaustive list of reasons why the UK financial industry neglects the process of definition of MiFID II at its own risk. Another chance to engage is approaching towards the end of the year. Don’t miss it. Any early work in assessing the impact of MiFID II and MiFIR will pay off later.

*The timeline can be found at: www.esma.europa.eu/page/Markets-Financial-Instruments-Directive-MiFID-II

THE CONSOLIDATED TAPE – IT’S NOT EASY BUT WITHOUT STANDARDS IT IS IMPOSSIBLE. Neena Dholani, Gl ...