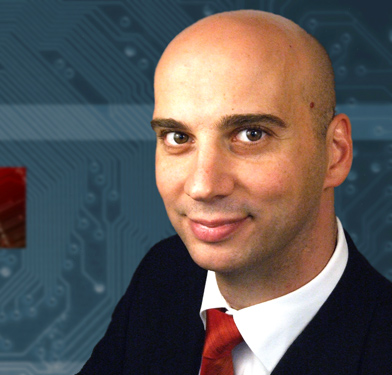 One aspect of the MiFID Review that has earned particular attention from regulators, the buyside and the sellside is pre-trade transparency and, even more important, its exemptions. Deutsche Börse’s Miroslav Budimir takes a critical look at the state of play.

The most discussed exemption in the ongoing MiFID review is certainly the so-called reference price waiver (RPW). This waiver allows for dark trading as long as the execution price of a security is limited to the bid, ask or midpoint of the bid-ask spread discovered on a reference market of this specific security. The RPW, along with the large in scale waiver, the order management facility waiver and the negotiated trade waiver, was designed to retain beneficial effects of certain order types for the securities markets or, respectively, to prevent the downsides of a fully transparent market, which could show in form of market impact when trading large blocks of securities. This is one of the most important reasons for dark trading, since buying or selling large volumes of an instrument will immediately draw the attention of other market participants who may adopt this specific investment idea which will result in a swift price movement in said instrument thus hurting the outcome for the initial block trader.

The fathers of MiFID introduced a strict price transparency regime in 2007 to overcome the market fragmentation which was caused by the increasing, and much welcomed, competition due to the advent of new trading venues all over Europe. However, many market participants prefer dark trading in order to hide their trading interests from others. But at the same time, they are interested in the trading interests of other market participants.

Transparency is something every market participant wants to benefit from but, at the same time, the appetite to contribute towards it is limited. Pre-trade transparency serves the general interest in its ability to generate fair and efficient prices, especially in a fragmented environment. Neglecting transparency means harm to every single market participant. Nonetheless, regulated dark trading and OTC trading account for more than 40 percent of overall pan-European securities trading, according to Fidessa’s European dark trading report in October 2013.

Another paradox regarding dark trading might even be more curious: A study revealed that less than half of all OTC trades in the Euro Stoxx 50 constituents exceed standard market size, and that 80 percent of all OTC trades could be executed on the reference markets (like Xetra) without any market impact. With these figures in mind, it is really not easy to understand why so many market participants refrain from the safety of lit trading.

In its version of the MiFID review, the European Commission opted for the most extreme modification of the RPW thinkable: complete abolishment. Later, both the European Parliament and the Council decided to re-include the RPW in MiFID II. However, there has been an overall agreement that the RPW in its original design should be further restricted to limit its capacity to decrease price transparency. Therefore, the European Council has proposed an important modification of the RPW in its MiFID II texts. The idea is to add a so-called “Double Volume Cap” mechanism to the existing RPW. The first cap serves to limit dark trading in a given instrument to an overall market share of less than 4 percent on one trading venue. A second cap is supposed to restrict dark trading regarding the whole European securities market: the volume of all trades with the help of the RPW must not reach 8 percent of the overall market share.

In September 2013, a proposal was submitted to the MiFID II-Trialogue team aiming for a modification of the RPW which was recently implemented in Australian and Canadian markets under the name “meaningful price improvement rule”. This concept is based on the idea that price quality could be improved if market participants were allowed to dark trade not only at the bid, ask or midpoint of the bid-ask spread, but to trade everywhere within the spread – hence the term “meaningful price improvement“. Another aspect of this concept is that regarding the order execution in a regulated market, lit orders should be preferred to dark orders.

While this approach sounds reasonable, it actually is a significant softening of the existing RPW rule. The “meaningful price improvement“ rule even has the potential to disrupt the efficiency of European equity trading, and to draw a large part of it into the ‘dark’ since this concept would prove an enormous incentive to make use of the waiver. The following illustration shows the economic impact of introducing a so-called “meaningful price improvement” rule, compared to the current MiFID provision of trading at the bid, ask or midpoint of the bid-ask spread. 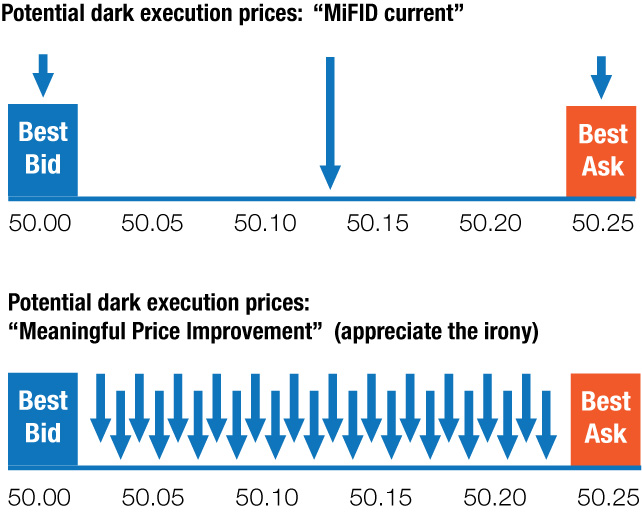 As easily can be seen, the “meaningful price improvement” is a mockery of MiFID’s general transparency requirement. With this approach, trading can effectively be done at any price within the bid-ask spread, compared to the ‘Midpoint’ execution restriction that MiFID foresees today. In the example above, with a 25-cent-spread and a 1-cent tick size, there is a total of 25 allowed execution prices.

The consequence would be that trading on the lit market would decrease, because price formation would start to take place on RPW markets. This leads to wider spreads, hurts the reference price, and impedes price discovery. More so, execution of dark trades with numerous different prices would dilute pre-trade price formation and, ultimately, liquidity. With price discovery suffering and lit market spreads widening, best execution would become very hard to achieve, since market participants will not be able to identify the best prices for their trading ideas.

A rather weighty example for this scenario is the Australian capital market, where the “meaningful price improvement” rule was implemented in May 2013: according to a research by Société Générale, spreads in certain securities have widened by up to 9 percent, with lit book activity reduced. As a consequence, all investors suffer from increasingly ‘untransparent’ price discovery. This example shows most impressively how price quality and, not to forget, the confidence of market participants all over Europe could decrease if pre-trade transparency was weakened any further. In its final shape, MiFID II will have to ensure that price transparency will be preserved or, better, strengthened in the future.

NOWHERE TO HIDE: THE RISE AND RISE OF COMPLIANCE. Louise Rowland charts the progress firms are ...