HOW BEST TO MEASURE MIFID’S SUCCESS? 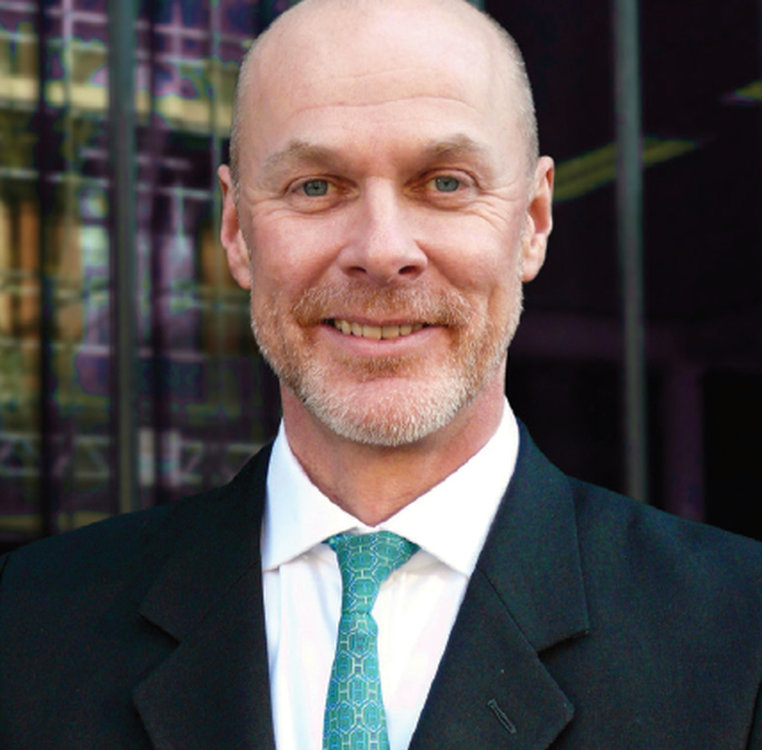 Never let it be said that the FIX Trading Community fails to debate the full gamut of issues. The 2018 EMEA Trading Conference, in London, was the organisation’s tenth annual event and threw up plenty for discussion, ranging from periodic auctions and broker preferencing, to the appropriateness of gentlemen wearing coloured socks in the City of London.

The answer was never going to be straightforward. A straw poll by FIX, conducted among 177 of the delegates found that 55 percent believed implementation had been “by and large” successful (Fig. 1). This was a view shared by regulatory representatives at the conference.

However, a not insignificant 33 percent stated they were still uncovering new challenges on a daily basis. A further 12 percent admitted they had only been able to implement the bare minimum required under the rules, due to resource constraints.

The implementation of MiFID II has not, at least so far, resulted in a fundamental change to trade flows, according to policymakers. The anticipated wave of feedback from the buyside, on controversial themes such as the introduction of double volume caps, has failed to materialise, delegates heard.

Much of the criticism of the rules, from conference delegates, was linked to whether MiFID had achieved its intended outcomes. With the regulations designed to create more activity in lit markets, delegates from trading venues and fund firms alike asked how the implementation of MiFID can be deemed a success if trading behaviour hasn’t materially changed.

When asked whether they supported the regulatory objective to increase the amount of trading that was conducted on lit markets, delegates actually said no. Of the 97 delegates that voted, 60 percent said that they did not support the objective (Fig. 2).

That said, MiFID has provided the industry with some positive outcomes, according to some. Speakers noted that the new rules have encouraged the development of innovative software, enhanced compliance and improved workflow and the quality of analytics – all good news for the end investor.

However, broad agreement remained that challenges will linger long after the MiFID II implementation date of 3 January 2018. A poll of 172 delegates, found that 69 percent believe that the collection, analysis and delivery of accurate data to meet MiFID requirements remains the biggest challenge that firms still face, following the implementation date (Fig. 3). 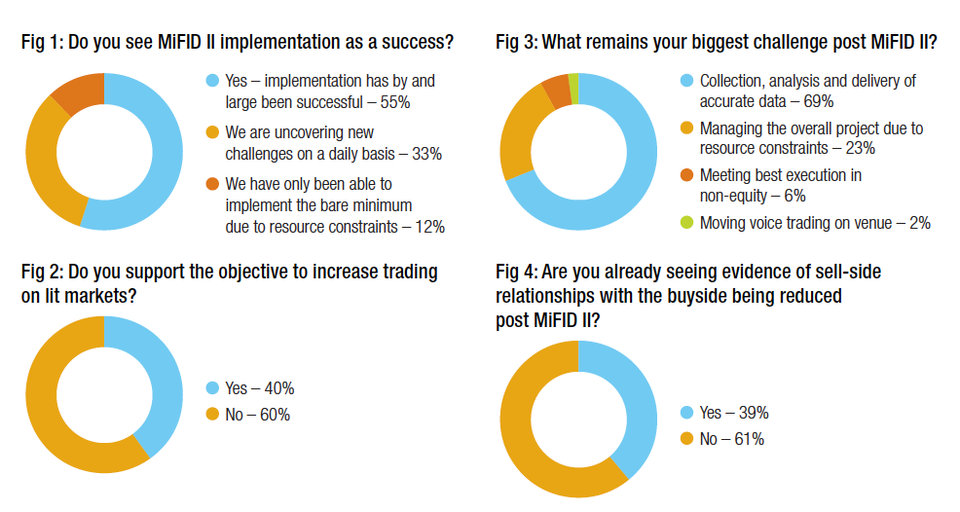 Panellists representing trading venues noted that greater fragmentation had been a consequence of MiFID II. Broker crossing networks had gone, being replaced, to some degree, by Systematic Internalisers (SIs). Periodic auctions, meanwhile, have emerged and more business is being done in blocks.

With such radical change being witnessed in a very short space of time, delegates called on policymakers and regulators to pause before making further changes which could disrupt the sector further. For some, fragmentation has made the marketplace even more difficult to navigate.

While there was consensus that the industry must not become complacent about the speed of change in the broader financial sector, there was a need to take stock of the impact of the latest regulatory changes by looking at the data and see how markets evolve in the coming months.

Nervousness around the speed of market evolution, is perhaps understandable. Panellists had suggested that fund firms had been consolidating the number of brokers that they used in the lead up to MiFID but noted that those brokers who remained “on panel” were benefiting from greater investment.

A poll of the audience, however, did not support this view. Of 85 delegates polled, 61 percent said they were not seeing evidence that sellside relationships with the buyside had reduced post MiFID (Fig. 4).

Evolution of the buyside

Asset managers are continuing to see growing cost pressures on their margins. The result has been a focus on costs and implementation of new processes to ensure that capture of beta and smart beta can be done as cheaply as possible. The growing importance of quant analysis, the electronification of credit and FX and development of machine learning, were all noted as examples.

These cost pressures have trickled down, leading some fund groups to build their own algorithms, while others have been using established ones in new ways. With organisations investing more in data, panellists stressed the growing importance of the FIX protocol.

In a look at how the fixed income market has evolved, buysiders noted that new execution policies, introduced ahead of MiFID II, meant that greater justification than ever before was required as to where flows were being directed. Delegates heard how the Financial Conduct Authority had issued a letter to chief executive officers on Payment for Order Flow in December of 2017 to underscore its tough new regime. Conference delegates said they were now increasingly recording the steps they take to source liquidity.

Some things hadn’t changed quite so much, however. One theme in particular was the influence that portfolio managers still have in fixed income trading. A poll of 18 delegates showed that just 6 percent of buy side firms now operate a fully segregated dealing desk with no fund manager input. The majority (67 percent) said that portfolio managers are welcome to contribute information such as axes, but the execution still sits with the dealing desk. A further 28 percent said that outright guidance is still given as to where trades should be made (Fig. 7). 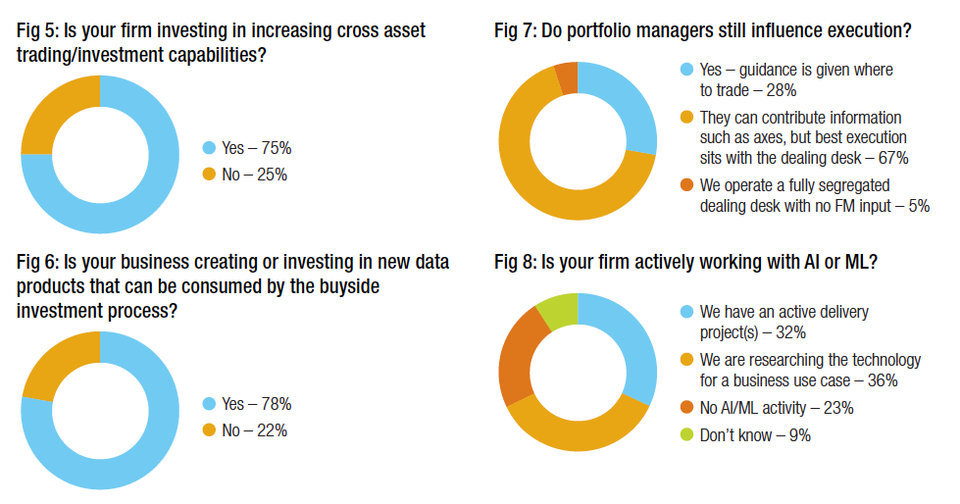 With banks increasingly referring to themselves as technology businesses and tech companies such as Google and Amazon widely tipped to be the investment houses of the future, delegates concluded the day by assessing current spending on artificial intelligence, machine learning and distributed ledger technology.

The audience for this panel was broadly split between the sellside (27 percent), vendors (26 percent), trading venues (25 percent) and the buyside (14 percent). Regulators and others accounted for the remainder.

One of the most interesting results came from the poll of current investment in AI and machine learning. The poll of 75 delegates found that 36 percent were currently researching AI/ML technology for a “business use case” while a further 32 percent had an active delivery project.

Speakers noted that the industry was currently in a “technology arms race” driven by market participants’ hunger to drive down costs. They also warned that cyber security was increasing in importance as attackers were becoming far more sophisticated than ever before.

It was, perhaps, fitting then that the event concluded with a reminder that the FIX community needs to engage more than ever before, given the speed of change in the market. But with so much happening, there seems to be a consensus that there is much to be optimistic about in the year ahead.

NOWHERE TO HIDE: THE RISE AND RISE OF COMPLIANCE. Louise Rowland charts the progress firms are ...