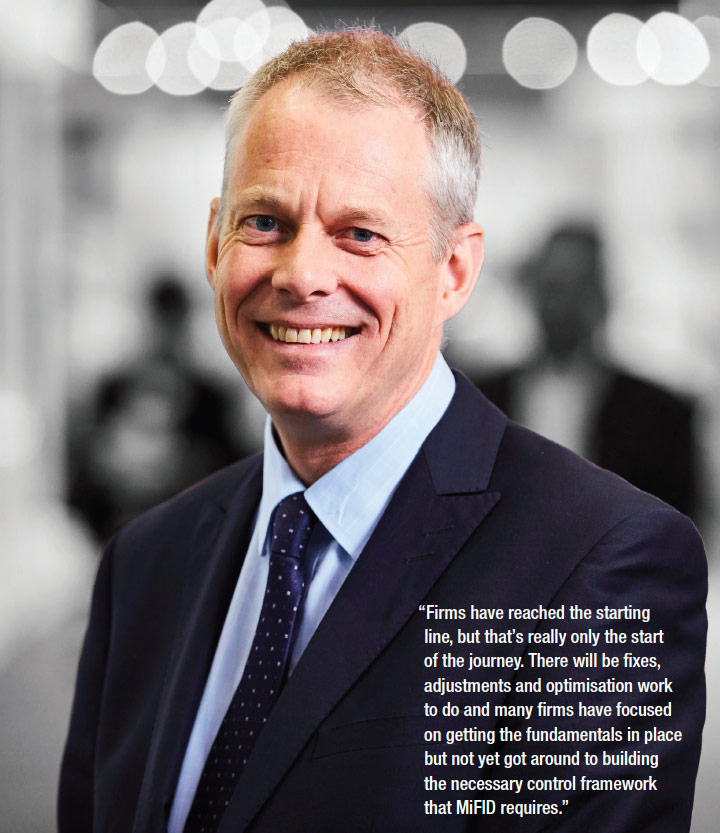 The January 3 MiFID II deadline marked a milestone for financial market participants across Europe. But there is still much work to be done, as Peter Moss, CEO at The SmartStream Reference Data Utility tells Best Execution.

MiFID II went live on January 3; how would you describe the industry’s efforts to reach that milestone?

Firms made a huge effort to be ready for the MiFID II deadline. SmartStream worked mostly with the large brokers, either approved publication arrangement (APA) firms or systematic internalisers (SIs). These firms were very focused on the starting line, trying to get everything done during the last few months to ensure they arrived at the start point in the best possible shape.

What did that work involve?

Much of the activity was around changing trade automation processes, particularly to make sure data is available for the trading mechanisms to use. This enables organisations to quote prices in advance of a trade and to deliver post-trade reports immediately after a trade. A lot of work was involved in this.

What challenges did firms face?

One of the main difficulties was the delay in the launch of the second phase of the European Securities and Markets Authority’s [ESMA’s] Financial Instrument Reference Database. Market participants anticipated the data would be ready in July or August, but it arrived only in mid-October. The launch provided access to the database containing the currently available reference data that will eventually enable market participants to identify instruments subject to Market Abuse Regulation and MiFID II/MiFIR reference data reporting requirements.

Because it came in October, this gave a shorter time than had been hoped for to enable market participants to prepare their reporting systems ahead of the MiFID II go-live. Moreover, the clarification of Regulatory Technical Standards 1 and 2 came only in early December, again giving market participants just a short time with which to work.

These delays caused some concern across Europe, with firms struggling to test their software in the absence of clarity about data requirements. A significant amount of work was back-ended to the final weeks of 2017.

Given these challenges, how well-prepared were firms for the MiFID II go-live?

Most firms arrived at the starting line in reasonable shape, despite the challenging circumstances. But it is inevitable that there were still some elements of MiFID II compliance that would not have been fully tied down. In many cases, assumptions had to be made that might not prove to be in line with those of others.

It sounds like firms still have more work to do in 2018.

That’s right. Pretty much every institution is resigned to the fact that their project teams for MiFID II will need to be kept in place for at least another nine months – probably until September 2018.

There will be immediate activities in Q1 2018 related to remediation of elements that didn’t work because of the last-minute rush to be ready. There will also be adjustments that might have to be made in line with any changes in guidance that will emanate from ESMA.

Firms have reached the starting line, but that’s really only the start of the journey. Many firms focused on getting the fundamentals in place for the 3rd of January and are likely to be running optimisation projects now, to ensure their infrastructures are sustainable operationally, that they are resilient and that they are cost effective going forward. These firms may also be looking at secondary sources of some of the core data, so they have a backup in case of failure scenarios.

Reporting is an important element in MiFID II; how have firms approached this?

Transparency has been a primary focus for MiFID II and that has been achieved by very specific rules for trading venues and systematic internalisers (SIs). For systematic internalisers this has meant new rules around pre-trade price transparency, post-trade reporting and transaction reporting to the regulators. A number of Approved Publication Authorities have emerged and most of the market is taking advantage of their services to support the pre and post trade reporting. At present, there are about 70-80 firms that will opt-in as SIs across Europe. But there may be another 40-60 that will get caught by the redefinition of SIs by regulators in September 2018. This is when becoming an SI ceases to be optional and becomes mandatory. Regulators will identify firms that are doing significant volumes in certain instruments and those that have not already opted-in will be told that they need to adopt the SI reporting requirements.

What do you think will happen over the next 12 months with regard to MiFID II?

I think there will be four main areas of activity: remediation projects, optimisation projects once firms have some breathing space, control framework projects to ensure the ‘belt and braces’ are in place, and finally compliance projects at firms that have been re-designated as SIs.

For the next 12 months, the market will see regulators bedding down what they need to do and make sure everything is running smoothly. There will be adjustments to the way things are working, and it is possible we will see a MiFID II.1, for example.

The changes regulators make will probably be relatively minor. For example, ESMA will probably adjust the thresholds for RTS 1 and 2 around the end of Q1, which will require firms to adjust their reference data accordingly. Financial regulators have been very clear that they will be watching how markets respond to this regulation and will be making adjustments.

For firms, there will be constant change until the end of 2018 as they bed down their systems to achieve optimal or routine operations. However, compared to what the market has been through to get ready for MiFID II, this work will be relatively straightforward.

Given all of the work firms have had to undertake, do they think it has been worth it?

The attitude towards MiFID II varies across organisations of course. Some definitely see it as an opportunity because the transparency in the market will create profound changes in the way instruments are traded. There’s consensus in the market that it will become a battleground, with organisations that have approached the change well benefiting more than those that haven’t.

There will probably be a bar-bell effect: large organisations that can deal with complexity will do well, as will small niche specialists. The generalists in the middle, without scale, may struggle a bit.

Despite the majority of the heavy lifting being behind the industry, my message is that there is still work to do to refine and operationalise everything in order to create robust and sustainable systems and infrastructures for MiFID II and beyond.