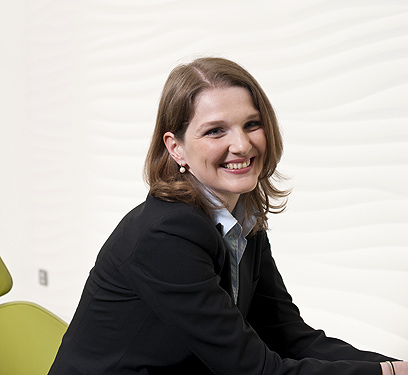 Today there are many different tick size regimes in Europe, none of which are harmonised or under the control of regulators, however this will change. The introduction of MiFID II requires that tick size regimes must be adopted by regulated markets and MTFs in shares and equity-like instruments such as ETFs. Dr. Sandra Bramhoff, Senior Vice President, Market Development, Deutsche Börse AG gives her initial assessment.

In the discussion paper that was published on 22nd of May 2014, ESMA suggests two options for a European tick size regime for shares. Option 2 is based on the existing FESE Table 2. This table is now extended from 17 to 20 price bands. In addition the new table allows for higher granularity (see Figure 1). 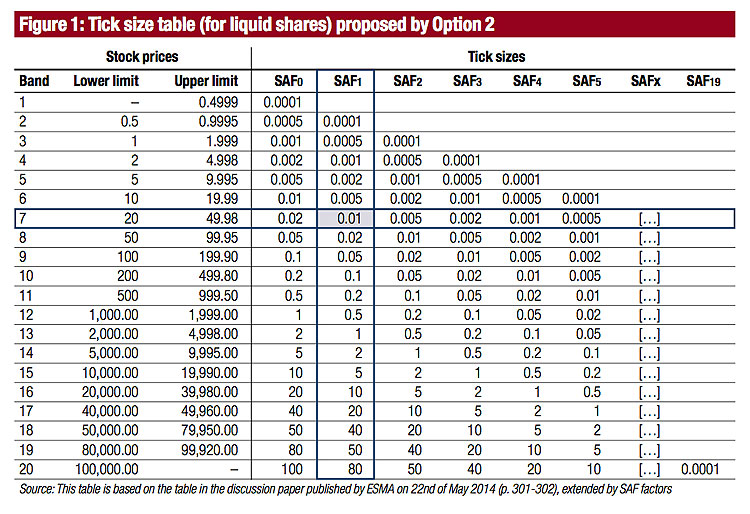 Secondly, Option 2 suggests that tick sizes for a share shall be adjusted after an initial six week calibration period after the regime started in case the spread to tick ratio falls below 2. Assume that for example a liquid share with a price between 20 and 49.99 EUR has a spread of 0.024 EUR. According to band 7 of the table it will initially be assigned a tick size of 0.02 EUR (see Figure 1). The spread to tick ratio of 1.2 is therefore less than 2. As a result the proposed tick size is too large and would need to be adjusted by what Option 2 refers to as a Spread Adjustment Factor (SAF). In order that the spread to tick ratio is above 2 the tick size needs to move to 0.01 EUR. After the initial calibration period the tick size for all shares will be reassessed on an annual basis.

Overall this option seems quite workable, however it may be worth thinking about a few adjustments. Firstly, it seems that the proposed spread to tick ratio of 2 seems very low. This implies that the tick size becomes too big in relation to the instrument’s average spread, i.e. it might be quite likely that the spread is compressed down to zero, meaning that the spread is artificially restricted by the tick size. Therefore the spread to tick ratio should be no lower than 4.

Secondly, the proposed initial six weeks calibration period might not be needed. Instead spread to tick ratios should be checked when the regime is implemented and if needed the tick size of a share should be adjusted through a SAF straight away. In order to determine if a SAF factor is initially needed the annually time-weighted average spread before implementation of the new tables should be considered. This minimises market disruption because tick sizes would not need to be readjusted after six weeks. It might also be useful to check in advance how many stocks would need an initial adjustment via a SAF. In case that number is very high it might be worthwhile checking whether the table itself is calibrated appropriately or needs adjustment.

Thirdly, a share first admitted to trading should not be assigned to the illiquid table but rather to the liquid or illiquid table, based on which table its peers have been assigned to. Instead of a reassessment after six weeks it should be checked at the end of the following quarter if a table change (and a SAF adjustment) is deemed necessary, as long as the share has been assigned to a respective table for at least a minimum of six weeks. The fact that tick size adjustments for new shares will only take place at specific dates, i.e. at the beginning of a new quarter, will result in less market disruption. A share that, for example, floats on 1st of March would first be moved into another table and assigned a new tick size via a SAF by 1st of July as the initial trading period is under six weeks.

Fourthly, Option 2 seems also to be workable for ETFs. However, a major difference between shares and ETFs is that the latter benefit from multiple layers of liquidity including the liquidity of their underlying markets. A differentiation between liquid and less liquid ETFs, based exclusively on their individual trading data, as proposed by ESMA in the consultation paper that was also published on 22nd of May 2014, does therefore not accurately reflect their true level of liquidity. Hence, for the sake of reduced complexity, all ETFs should be assigned to the liquid table with tick sizes being amended manually via a SAF when deemed appropriate.

Option 1 has only been designed for shares as it suggests taking trades as a liquidity proxy; for ETFs this is not an ideal proxy for the same reasons as stated above. Furthermore, the tables have been designed based on an optimal tick size as a proportion of 1.4 to 2.5 average spread for liquid shares and 1.4 to 5 for less liquid shares. As outlined above this will artificially restrict the tick size. The tick size becomes too large in relation to the instrument’s average spread thereby having an impact on the viscosity. While this may lead to less perceived flickering at the top of the book it might however reduce flow from liquidity providers. Ultimately the number of transactions may go down and the effect would be a shift to a lower liquidity band. As a result tick sizes will increase and it will turn into a vicious circle.

Market participants should therefore carefully consider these two options and also base their judgement on what ESMA points out itself in the discussion paper: the intention is to implement a European tick size regime that is robust and scalable, as simple as possible, easy to implement, enforceable and does not cause disruptions to trading when being implemented.

[1] According to Commission Regulation 1287/2006 a share is considered to be liquid if it is traded daily with a free float of not less than 500 million EUR, and one of the following conditions is fulfilled: (1) the average daily number of transactions in the share are not less than 500 or (2) the average daily turnover for the share is not less than 2 million EUR. Please note that ESMA suggests changing these parameters under MiFID II, cf. p. 174f of the consultation paper published by ESMA on 22nd of May 2014.