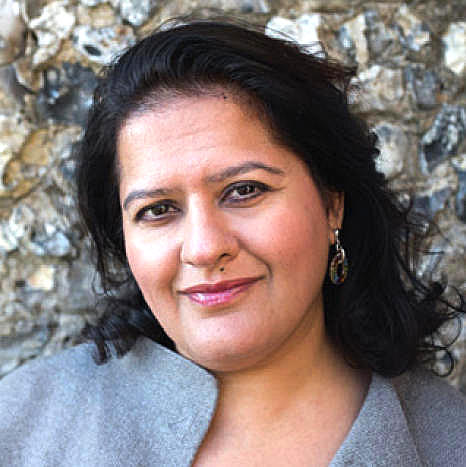 The consequences of the UK’s decision to leave the European Union dominated discussions at the 2019 EMEA FIX Trading Conference on 14 March (with or without a deal). Delegates attending this year’s event at Old Billingsgate, London, weighed how the shifting geopolitical environment in Europe will impact the regulatory priorities of the future, and how this will affect firms as they embrace new technologies and data techniques.

In a poll of delegates, less than half (49%) said that their firm had put plans in place in preparation for a ‘no deal’ Brexit, with a third saying their firms were ready. A further 17% said they were not (see Fig 1). 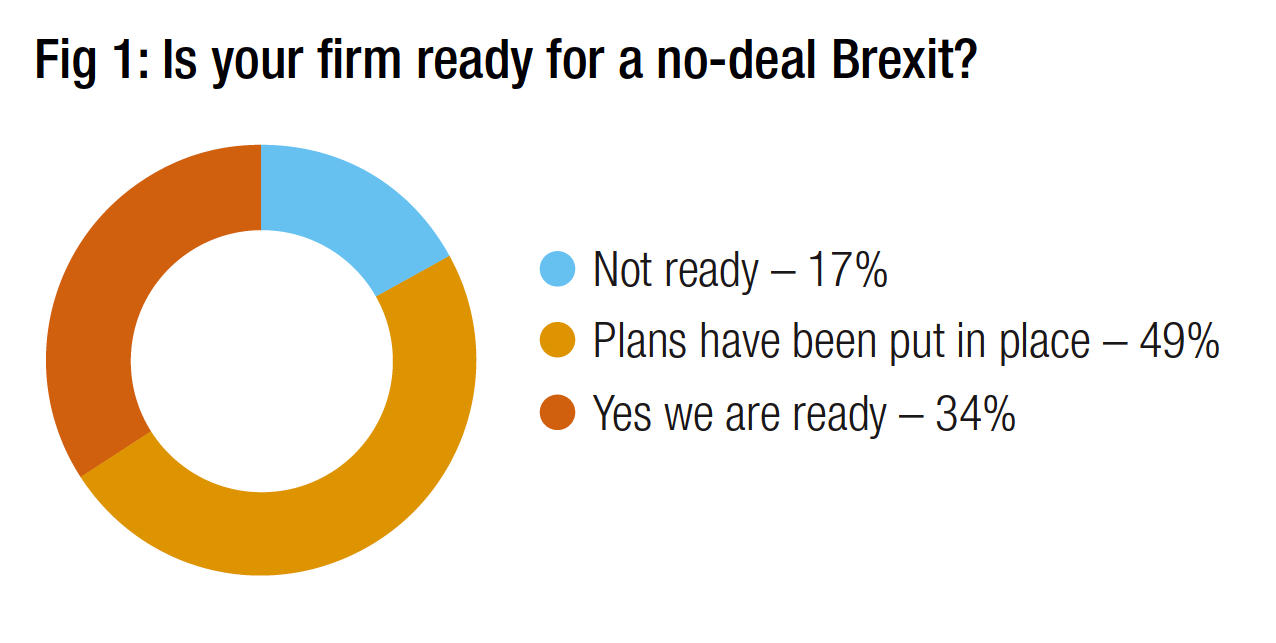 As politicians in Westminster debated the best way for the UK to leave Europe, buyside traders considered their own future trading pathways for when Europe’s largest capital market moves outside of the Union.

Delegates were asked if they were “comfortable” with what the industry needed to do in relation to the Markets in Financial Instruments Regulation’s (MiFIR’s) share trading obligation (STO) rules. The vast majority – 85% – said they were not (see Fig 2).

Buyside equity traders from continental Europe told how asset managers were scrambling to “onboard” the EU27 branch of their current brokers, in case they are prevented from executing business through a UK entity in the event of a “no-deal” Brexit.

They warned that the current STO rules could lead to a fragmentation of liquidity and post-trade transparency, should they become unable to trade stocks in the place where the biggest source of liquidity was concentrated.

Buyside traders have asked trade associations to stress this point to regulators. Their main concern is that any fragmentation essentially leads to an increase in trading costs to the end-investor. One European buyside trader explained that while arbitrage mechanisms would allow him access to a UK stock through the EU27, he wouldn’t necessarily be able to achieve “best in class” execution.

Conference speakers warned politicians and regulators not to use the STO rules as a political pawn and called on regulators to clarify the position before the UK leaves.

Delegates were advised that regulatory co-operation agreements have been drawn up between the European Securities Markets Authority (ESMA) and the UK’s Financial Conduct Authority (FCA) and Prudential Regulation Authority (PRA) for when the UK leaves. However, with UK entities no longer submitting data to ESMA after Brexit, there was debate about how this will impact the quality of transparency calculations, and whether this will lead to yet more changes to the Markets in Financial Instruments Directive (MiFID/MiFID II).

The issue of data was a recurring theme throughout the conference, and one which was deemed a key ingredient in building the asset manager of the future.

Delegates heard how fund managers were investing in new technologies to make better use of the data that they have, through collaborative working solutions. Panellists explained how firms were increasingly expecting employees to have an appreciation of data analysis techniques, although they stressed that they did not see this overtaking capital markets knowledge. The buyside trader of the future will need both. 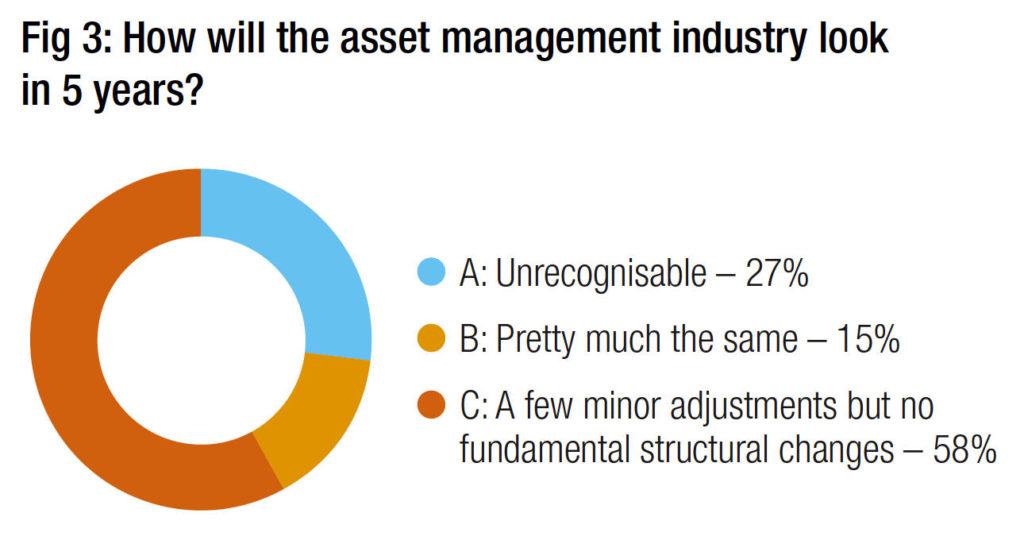 In a poll of delegates, attendees were asked to vote on what they thought the asset manager of the future would look like (see Fig 3). 27% said they believed future fund firms would be unrecognisable from today, while 73% thought that it would either look the same, or would have minor changes.

There was, however, widespread recognition that trading technology is increasingly assisting traders to process simple trades, freeing up teams to work on illiquid, or more complex, trades.

Attendees considered how the use of machine learning could, in future, aid decision making, by steering traders through large information sets by flagging key indicators rather than leaving them to wade through piles of unstructured data. 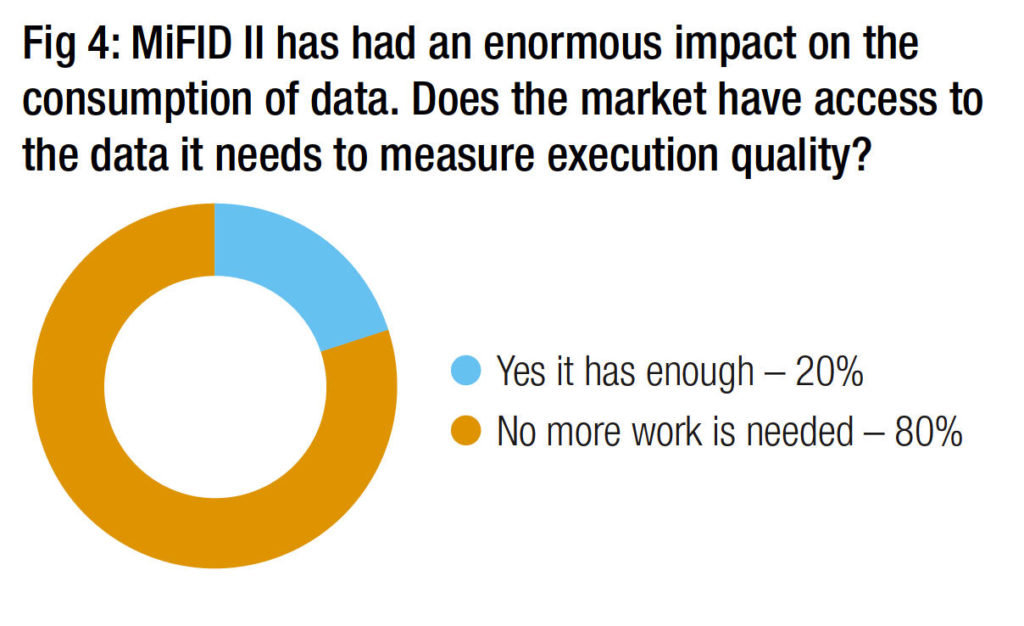 When it comes to using data to assist with execution, there remain concerns about the quality of the data used in some of today’s assessments. In the live poll of delegates, a decisive 80% said that they believed more work is needed in this area (see Fig 4) .

There was also a thematic warning that asset managers are likely to continue to face pressures to consolidate, and some of this pressure will be driven by technology. Attendees heard that, in the short-term, asset managers will become small-scale specialists or large behemoths. There was consensus that there is no longer room for ‘mid-tier’ generalists.

In addition to looking at the evolution of asset managers as a whole, delegates considered how trading activity was changing within specific asset classes. In equities, speakers were keen to examine the role of frequent batch auctions, following ESMA’s call for evidence back in November. Prior to the conference, ESMA stipulated it wanted to know whether market participants had been using frequent batch auctions to circumvent the double volume cap – introduced to encourage trading in lit markets.

While ESMA reviews the responses that have been submitted through formal channels, delegates at the conference called on the regulator to remember the benefits to the end-investor of buyside firms being able to execute larger trades with little market impact.

Delegates agreed that frequent batch options offer one way to do this and warned the regulator not to assume that firms were only using them to get around the double volume cap limits. They also asked for the regulator to consider the role that these trades have in price formation, more broadly. 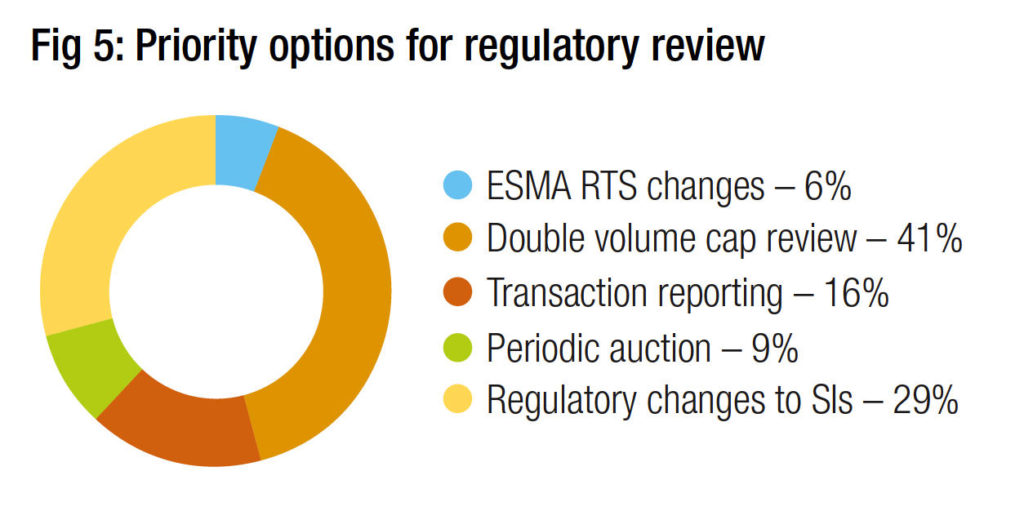 When delegates were polled on what they believed should be a priority for the regulator, 41% said to review the double volume cap, while 29% said regulatory changes to systematic internalisers. A further 16% said transaction reporting (see Fig 5).

In the non-equity streams, further requests were being made of the regulators. A persistent bugbear for some fixed income traders related to the inaccurate CFI codes allocated to bonds. Delegates explained that it can be hard to correct these codes even when they are known to be inaccurate and applauded the efforts being under taken by ICMA in engaging with ESMA on this topic.

Attendees reviewed the consequences of MiFID II on the bond market and recognised that the buyside was now placing far greater scrutiny on the costs associated with acquiring fixed income research. This, they said, had resulted in a reduction in the number of research providers.

Delegates were told that the European Commission had recognised this fall in the number of companies serving this market and had commissioned an independent consultant to conduct a review. 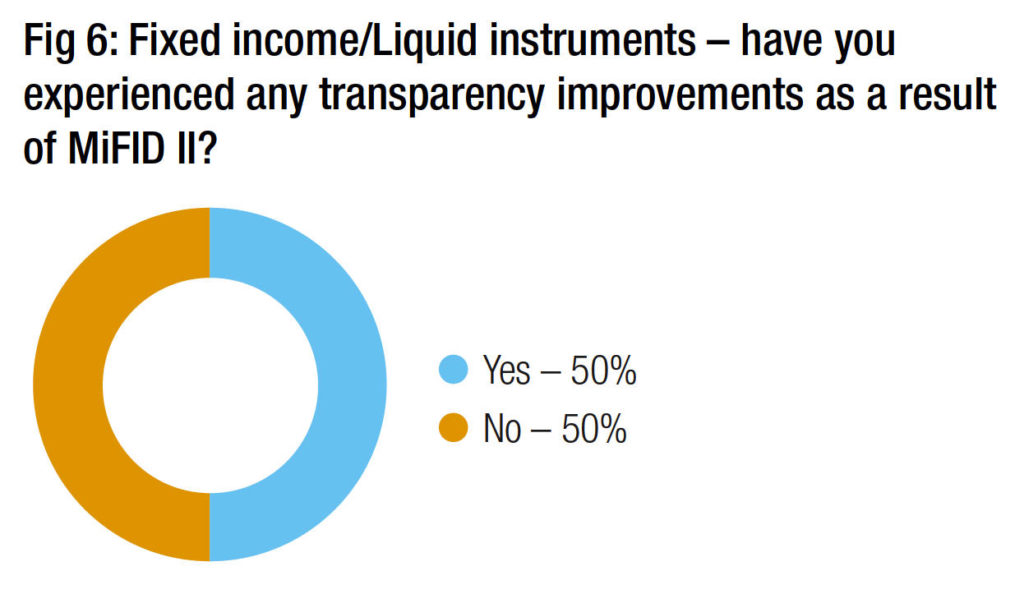 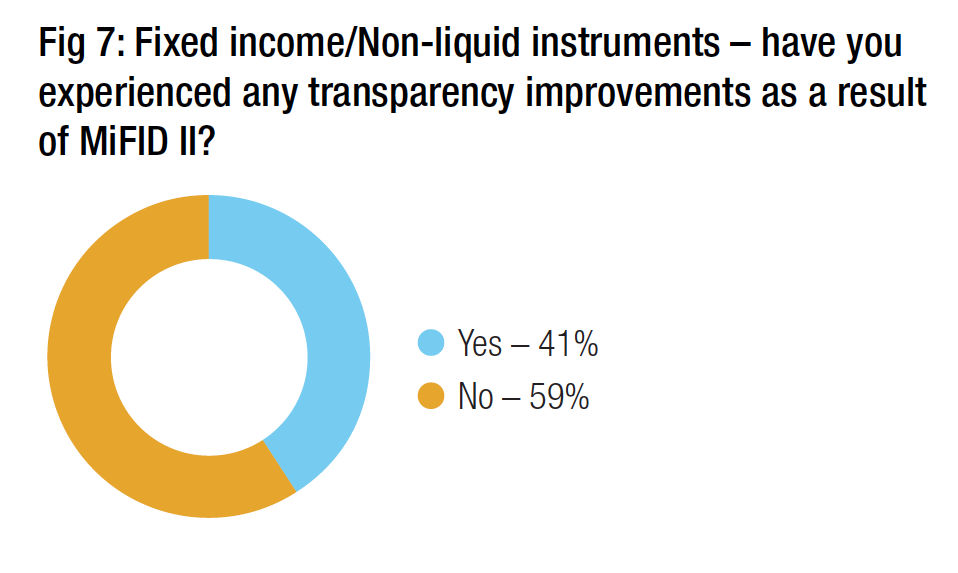 Finally, there was broad recognition that fixed income dealing desks were now considered a source of alpha at many buyside firms, with portfolio managers and dealers working much more closely than in previous years. With dealers spending less time on executing small trades, thanks to technological advances, their focus is being expanded to alpha generation from larger trades.

In summary, this year’s conference was a mix of reflection and excitement. The substantial changes witnessed from the implementation of regulations such as MiFID II, and the UK’s forthcoming departure from the European Union stimulated much of the debate. But it was clear that the industry is on the front foot to seize new opportunities emerging from technologies, data and collaborative working. If nothing else, delegates left this year’s conference with an optimism that things are changing for the better.