PLANNING FOR THE UNKNOWN.

Irina Sonich-Bright* discusses the diversity of the FIX Trading Community and how it addresses the yet undefinable Brexit outcome.

The FIX Trading Community is wonderfully diverse. Its members consisting of buyside, sellside, vendors, exchanges and market operators, working closely with other industry associations such as AFME, BVI, EDMA, IA and ICMA, covering mostly technical issues, but it doesn’t stop there. FIX, renowned for its messaging protocol industry standards, also works on and publishes practical guidelines that affect multiple areas of the trading community.

With a diverse community comes diverse challenges. As a result, for Brexit specifically, the community is focusing on identifying the gaps the other industry associations may not be addressing or, where there is a need for the wider community to agree on a certain implementation. For example, with Brexit the IA and AFME focus on the situation around equivalency, Shares Trading Obligations (STO), and firms’ readiness for Brexit whatever the outcome might be. The FIX Brexit Working Group however, (co-chaired by myself and Dr Anthony Kirby) is going into the weeds and highlighting the impact on the reference data, trade and transaction reporting, and the possible changes to the transparency calculations. In fact, the majority of the Brexit points that the Working Group are addressing now relate to the implementation of the latest regulatory initiative that was rolled out in Europe last year – MiFID II. To that extent, many of the conversations FIX Trading Community members are having right now involve how the ‘tale of two MiFIDs’ will play out, particularly if the industry fails to receive conclusive and unambiguous direction from the regulators on either side of the UK and EU.

The impact on post-trade transparency

As an example, a recent technical question received by the Brexit Working Group was how would firms be able to identify the jurisdiction of a Systematic Internaliser (SI) they are dealing with, as well as the jurisdiction of where the trade was to be reported. Both relate to the complexity of the rules that firms need to be able to consider in order to fulfil their post-trade transparency obligations. In a no-deal Brexit scenario, the reporting of a trade by an SI in the UK no longer means that it fulfils the trade reporting obligations of the SI’s European counterparty, who will also have to report that trade in the EU. However, if the same EU counterparty was dealing with an EU SI – the single EU SI report would be sufficient.

Under the temporary transitional power, UK investment firms that do not have a reporting obligation for transactions conducted with an EU27 investment firm before Brexit will not be required to report these transactions to a UK APA for a period of 15 months after Brexit. This was confirmed by the FCA’s statement on various MiFID obligations if the UK leave the EU without an implementation period, 13 March 20192(see Figure 1).

The FIX Global Technical Committee is assessing and identifying possible new FIX Tags to assist in identifying the jurisdiction of an SI and also which jurisdiction region the trades will need to be reported to. This will result in FIX delivering a revised Trade Reporting Guidelines for MiFID with additional BREXIT Tags.

The initial statement from ESMA on STO3in a hard Brexit scenario, indicated a potentially diverse treatment of STO between the EU and UK. A broker’s smart order router (SOR), tuned in to the provision of best execution, won’t be able to route orders subject to the EU STO to the markets where the price of a stock might be better than on an EU market, and, for the originally selected 14 GB ISINs, to the most liquid markets.

In a more recent statement4released on the 29th of May, ESMA has confirmed that it will not be applying the EU STO restrictions to the 14 GB ISINs after all, but rather restrict EU STO to the EU27 ISINs only. 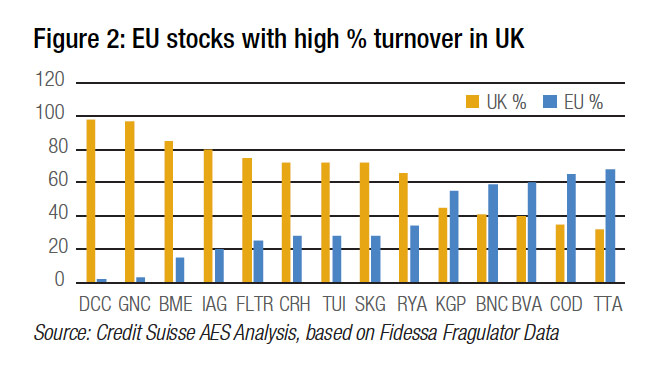 In response, the FCA has also issued a new statement5, disagreeing with ESMA’s method, because a number of shares with EU27 ISINs have both a listing, as well as their main or only significant centre of market liquidity, on UK markets. As demonstrated in Figure 2 for a subset of stocks traded on LSE. The FCA insisted that reciprocal equivalence is the main way to avoid disruption and suggested that an alternative would be for both the UK and EU STOs to be applied on an EU28 basis for a limited period of time after a no-deal Brexit.

This development has created a need for the industry to agree on a standard of how to communicate electronically what STO should be applicable to their orders. This is specifically relevant for private banks and asset managers who have clients and funds across different jurisdictions. Third-country private banks will need to be able to tell their broker to execute orders originated from EU clients in accordance to the EU STO, whereas the non-EU originated orders won’t have the EU STO trading restrictions.

It is important that we also consider how MiFID and Brexit will affect our global community. Whilst we strive to keep any changes related to MiFID or Brexit implementations of the FIX Protocol and practices restricted to the UK and Europe, some of these changes are also affecting our global members. As an example, the work the Execution Venue Transparency Working Group has been focusing on (e.g. Tag 30, 29 and 851) was originally initiated by the US Buy Side Working Group and has been affected by MiFID II changes. Global vendors who serve UK and EU clients suddenly have to keep separate budgets for their European regulatory initiatives (e.g. reference data, reporting) with FIX Working Groups sometimes being the only channel of sourcing information around upcoming changes to the FIX Protocol standards and practical use guidelines.

With the Brexit delay, the urgency of these changes ceased slightly, however, with less and less confidence in the outcome of what Brexit will look like, the industry is ‘preparing for the worst whilst still hoping for the best’. n

If you are interested in getting involved in FIX Trading Community and the Brexit Working Group, contact: fix@fixtrading.org.