ELECTRONIC BLOCK TRADING IS NOW A FEATURE OF THE MARKET.

Turquoise Plato Block Discovery™ has become the mainstream electronic multilateral anonymous block trading mechanism, today fully automatic with no manual firm ups nor manual’s related fading. Growth in cumulative value traded reflects benefits to investors with Ä125.6bn matched since the 2014 launch to the end of August 2018 of which Ä121.6bn or 97% traded since the September 2016 co-operation announcement with Plato Partnership (see Fig 1). 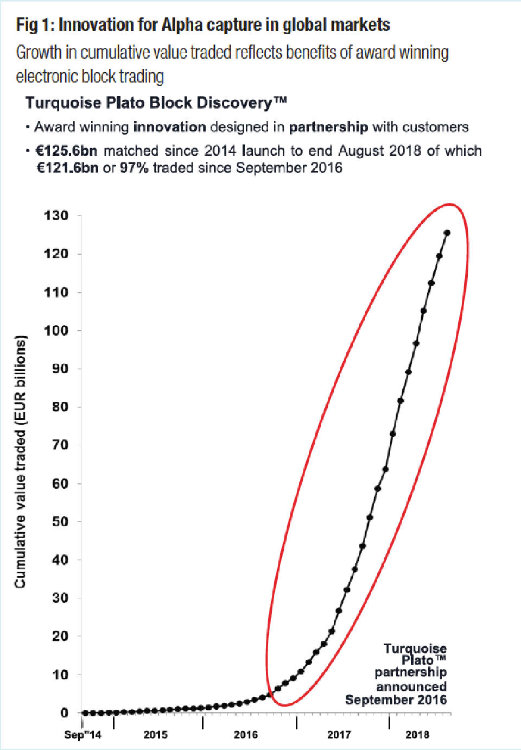 Intraday, the most active half hour of Turquoise Plato Block Discovery™ is the first half hour, with a reasonably even distribution for the balance of the day. This morning activity encourages users to enter Block Indications early in the trading day. The liquidity profile of Turquoise Plato Block Discovery™ is an excellent complement to that of primary stock exchanges where liquidity events concentrate in the closing auctions at the end of the day. 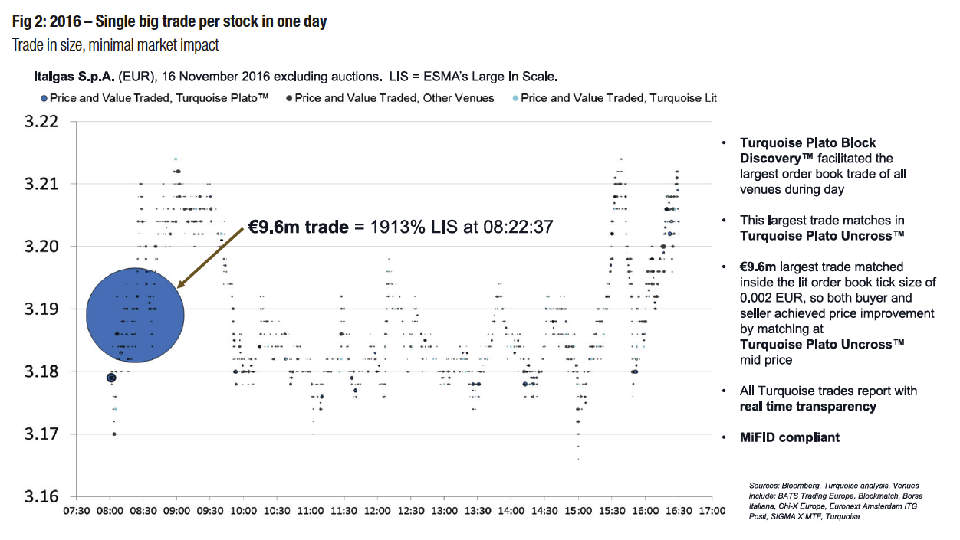 The average size of trades matched via Turquoise Plato Block Discovery™ has continued to rise. For ESMA blue chips with Large In Scale thresholds of Ä500,000 or more (Band 5 in MiFID I and Bands 8 & 9 in MiFID II), average trade sizes have grown more than 25% by Q2 2018 compared with those of MiFID I Q4 2017. 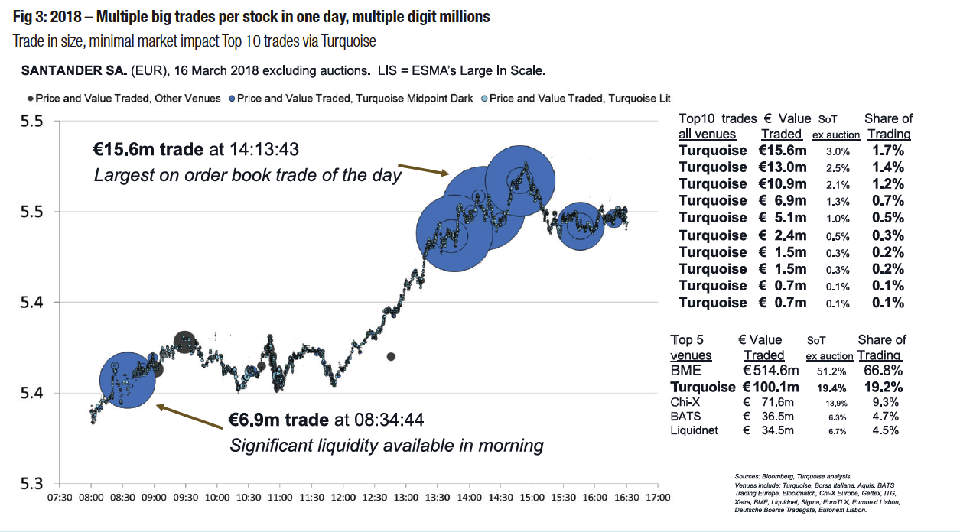 This shows investor behaviour continues to change, sending larger orders to Turquoise Plato Block Discovery™. These trades with average size above Ä1m are more than 100x the average of Ä0.01m per trade for the same stocks via continuous limit order books (see Fig 4). 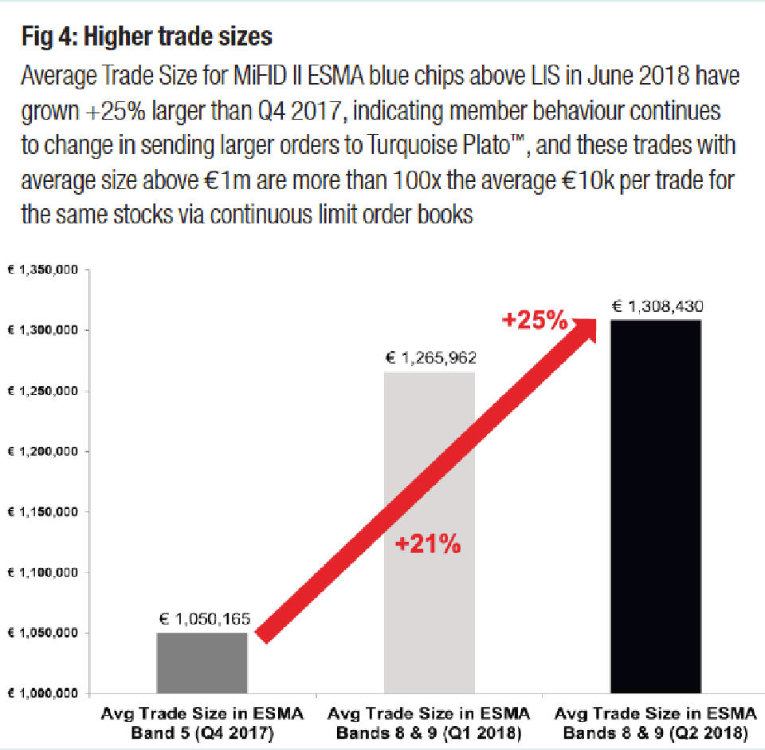 At the request of members, Turquoise launched in December 2017 its next intraday trading innovation in partnership with customers. Turquoise Lit Auctions™ subsequently grew its activity from Ä1m value traded in January 2018 to more than Ä1bn in June 2018.

Some market regulators have expressed interest and scrutiny of other venues for the amount of same member–member bilateral matching they claim to process via their periodic lit auctions. 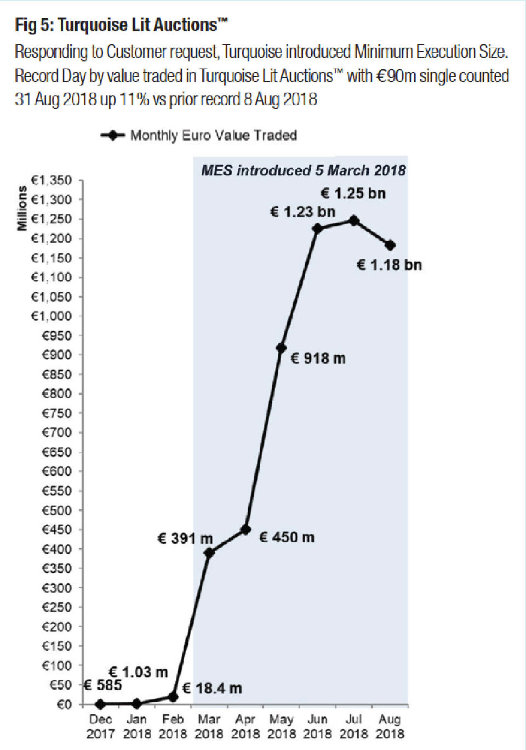 At Turquoise, we share our core principals with London Stock Exchange Group: integrity, innovation, partnership and excellence. The primary objective for Turquoise is to be the multi-jurisdiction securities trading venue of choice. With an ageing population and an increasing reliance on private sector pensions in Europe, capital markets need to be competitive to deliver meaningful long-term investment returns. With European interest rates and investment returns near zero, the focus is on efficient trading to minimise cost and enhance long-term investment returns.

At Turquoise, our focus is to listen to customers and prioritise how we can help them to meet regulatory obligations, reduce costs and generate revenues through new business initiatives which are developed in partnership with Turquoise.

Key investment trends are the search for growth and the complementary desire to outperform benchmarks by trading quality liquidity through electronic trading channels like Turquoise Plato Block Discovery™ and Turquoise Lit Auctions™.

We are listening and responding to this demand with innovation and open access.