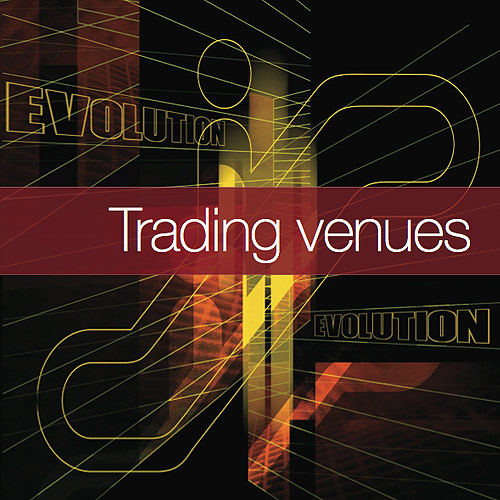 Louise Rowland assesses the fate of the trading venue.

Be careful what you wish for. That’s how one seasoned market practitioner sums up the evolution of the equities trading venue landscape post MiFID I. Back in 2007, regulators were keen to encourage new players on board, to shake up the monopoly of the primary exchanges and deliver greater competition, fairness and transparency. Few can have anticipated the explosion of alternative trading venues that followed, together with, some argue, excessive fragmentation of liquidity.

A number of these newcomers have fallen by the wayside, ill-equipped to thrive in the harsh economic climate. There have also been periods of consolidation through M&A activity, such as ICE’s acquisition of NYSE Euronext in 2012. Yet new entrants continue to pitch up on the scene, a trend likely to intensify as the market gears up for MiFID II in January 2017, set on pushing trading across all asset classes into open and transparent markets.

Is the market already too crowded? One man’s fragmentation is another man’s healthy competition. Europe now has over 35 alternate liquidity sources to the primary exchanges in Europe, including broker crossing systems, lit and dark MTFs. The US, following RegNMS, has 13 public stock exchanges and an additional 50 alternative venues. That translates, inevitably, into smaller trade sizes, particularly in dark pools. “It’s crazy,” agrees one US market participant, “but where do you draw the line in the sand as to how many it should be? It’s a very hard thing to do.”

On the other hand, the proliferation of MTFs has supplied users with a welcome degree of choice, faster trading and lower costs. According to Fidessa’s Fragulator, dark MTFs accounted for 5.8% of European market value in 2014, excluding OTC trading.

Rob Boardman, CEO, EMEA at ITG, is a huge fan of MiFID I and all the market activity it has generated. “It meant the removal of centralised rules which enshrined the exchanges with privileges. Most industries are better off with a very competitive offering. Now we have genuinely different alternatives in terms of price structure, methods of interacting with customers and so on. It’s like a golfer with a different set of clubs to choose from. You take the right club out of your kit bag depending on what it is that you need.”

The key is differentiation û having a USP to add to the trading ecosystem, rather than just setting up your stall as another me-too MTF. Steve Grob, director of group strategy at Fidessa, sees more of this ahead. “I think we will see more venues trying to solve specific problems of trading styles. What we need is trading venues with multiple views, of different types and different risk appetites to achieve the best mix for clients. Everyone is looking at a mountain of work under MiFID II and thinking, ‘do we really need another generic trading venue unless it’s one that is trying to solve a particular liquidity problem or has a unique technical specialism’.”

Turquoise’s new Block Discovery Tool, for example, has been very successful in chasing down large sized trades for its members. Aquis Exchange arrived on the market last year with its radically different subscription pricing model. Platform-in-waiting the Plato Partnership is making waves ahead of its launch. Developed by a consortium of leading banks and asset managers, it is being designed as a not-for-profit equities trading venue, supporting academic research to improve Europe’s market structure.

It’s a welcome addition, says Rebecca Healey, senior analyst at TABB. “Plato is a development that the industry definitely needs. People have been looking for a solution to the requirement for a utility exchange for years, however utopian this may seem. We have a European marketplace that currently doesn’t work as it should and Plato is trying to find answers to complex questions. That should be commended. By committing to conducting research into the market structure debate, we can focus on prevention rather than cure. There’s an altruistic angle to it which is new; sharing intelligence collaboratively can improve the market for all.”

In the US, IEX launched in 2014, unveiling its pioneering ‘speed bump’ to prevent HFT firms from front-running other traders, and has its sights set on being a fully-fledged stock exchange by the end of 2015. Fellow newcomer Luminex is also focusing on minimising the impact of HFT and reducing stock trading costs. 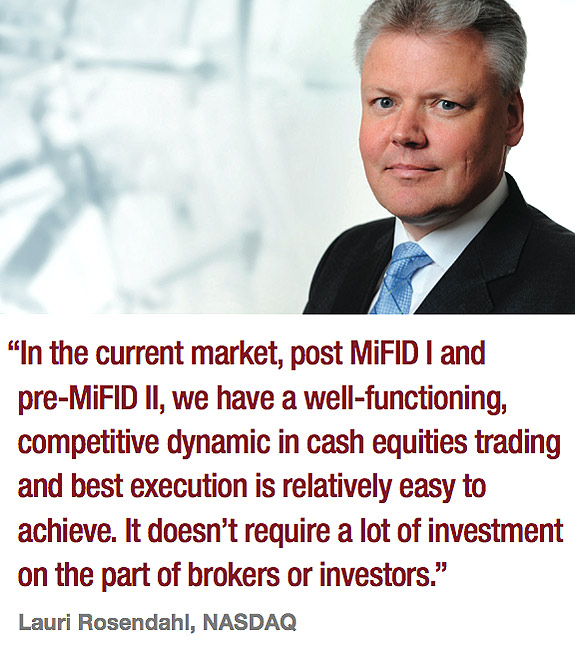 Has best execution improved, thanks to the influx of all these new venues? Some believe the term itself is too nebulous or muddled, while others see the concept as overly prescriptive. That’s particularly true in the US, where the focus on price often outweighs all other considerations or matrices.

Lauri Rosendahl, senior vice president, Nordic equities and equity derivatives at Nasdaq, is upbeat about the situation in Europe, however. “In the current market, post MiFID I and pre-MiFID II, we have a well-functioning, competitive dynamic in cash equities trading and best execution is relatively easy to achieve. It doesn’t require a lot of investment on the part of brokers or investors. We as a venue are running a primary exchange offering for our members combined with both smart order routing and execution algo services as a one stop shop service for best execution. They have everything they need for it, in one neutral environment.”