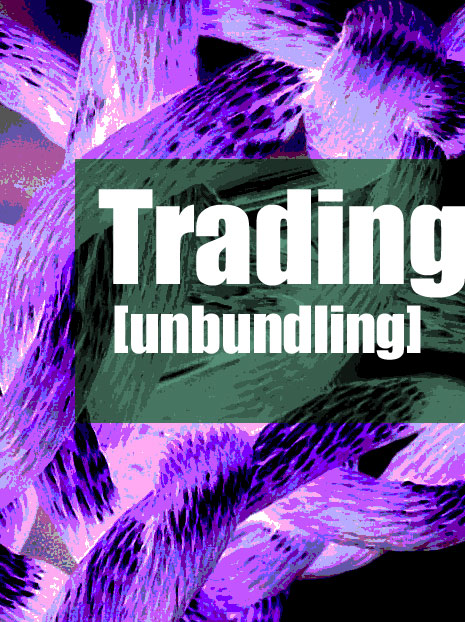 It’s been a long time coming but the separation of research and execution is inching ever closer. Lynn Strongin Dodds looks at the latest chapter.

Although there is a lot of buzz around the unbundling of research and execution, it is far from being a new item on the regulatory agenda. The Myners report in 2001 started the ball rolling and there have been many fits and starts since. MiFID II has firmly ensconced the topic but the final edict has been pushed back to November from September although the changes are expected to be fundamental.

“Whilst regulators may see unbundling as a progressive move for the industry, I think they may have underestimated the depth and breadth of its impact,” says Steve Grob, who is responsible for Fidessa’s global strategic development. “It will certainly alter, permanently, the traditional relationships between the buy and sellside.”

The European Securities and Markets Authority (ESMA) is proposing that fund managers buy research using either direct payments out of their own revenues or from a separate research payment account (RPA), which can be funded by a specific charge to a client. In other words, the buyside would no longer be able to direct execution work to a particular broker as a way of paying for research they had received from that firm via the commission.

Not surprisingly unbundling is controversial and it was left off the list of recently published technical standards. Instead, the Paris watchdog published its technical standards on new transparency requirements for bonds, position limits on commodity trading positions and open-access provisions for derivatives clearing houses. More time was needed to debate and discuss the issue.

One reason is that although ESMA and the Financial Conduct Authority (FCA) are broadly in line, there is dissension on dealing commission use. The French regulator, the Autorité des Marchés Financiers (AMF) is a strong advocate of the classic commission sharing agreement (CSA) structure whereby end clients bear the brunt of the research cost albeit with stricter transparency and reporting rules under MiFID II. The argument is that asset managers using the system would only have to tweak their existing frameworks for budgeting and disclosure. By contrast, the FCA is a proponent of the new RPA scheme which ensures that the end clients do not shoulder the cost burden. However, it would entail investing in new infrastructure and processes. 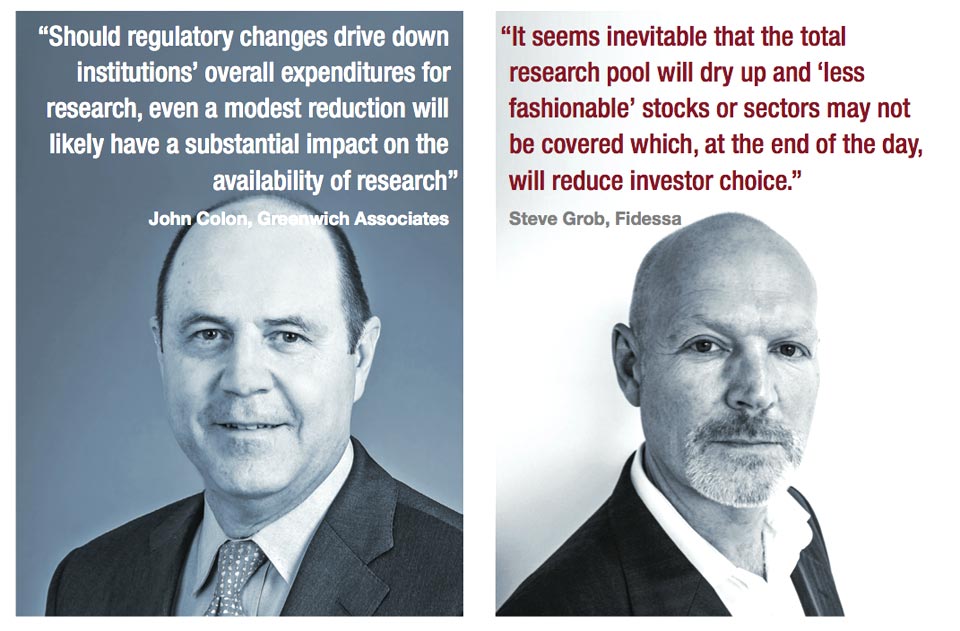 Despite the uncertainty, consultants and research houses have been busy crunching numbers. According to a new report from Greenwich entitled Payment for Research: The Calm Before the Storm, the larger European institutional investors generated an estimated €3.4 bn in cash equity commissions for the 12 months to 31 March. Roughly €1.7bn or 52% of that amount was directed to pay brokers and third-party research providers as compensation for research.

Although the percentage was lower than the 54% in the previous 12 months and the figure spent on research is well below the 2007 and 2008 peak of €2.5 bn, it still represents a large chunk of revenues at risk, according to John Colon, author of the report and managing director of the firm’s market structure and technology practice. “Should regulatory changes drive down institutions’ overall expenditures for research, even a modest reduction will likely have a substantial impact on the availability of research,” he adds.

The consultancy canvassed 200 European equity portfolio managers and 185 European equity traders about their commission spend, allocations for research and advisory services and their relationships with brokers. A majority of UK firms questioned believe that the changes wrought by MiFID, which takes effect in 2017, will leave no room for research to be funded by commission. They expect instead to see a rise in hard-currency payments or a greater reliance on in-house research at the same time as spending drops on commission payments.

“Many agree with the mantra of increased transparency and accountability to protect the end investor, but there are still mixed views on how to pay for research,” says Adam Toms, chief executive officer of Instinet Europe, the equity execution arm of Nomura Group, which recently received approval to allow clients to pay for research in cash, rather than using trading commissions. “We would like to see CSAs (commission sharing agreements) continue to be used as they only need marginal enhancement to meet the residual goals of the regulators. We are also seeing much more proactive management of CSAs in the run-up to MiFID II.”

Juan Pablo Urrutia, European general counsel at ITG, adds, “One of the big questions is how RPAs would work? For UK asset managers they seem pretty inevitable bar a U-turn from the FCA. The problem is that they are extremely clunky and asset managers do not have the technology, people or infrastructure to do them. They could outsource it to a custodian or a third party specialist.”

Another challenge, which Colon points out in his report, is the sourcing of the research. “Shifting research expenses to investment managers’ clients via higher management fees, charging an explicit fee to fund a research payment account, or expecting brokers to simply continue providing research at lower margins will be tough options to sell”.

Putting a price on the research will also not be easy, according to Matt Gibbs, product manager of Linedata. “The sellside is having conversations that they never had before and asking questions about the cost and the boundaries that they should put around the product. There is no magic number and the pressure moves to the buyside in terms of what value they put on it.” 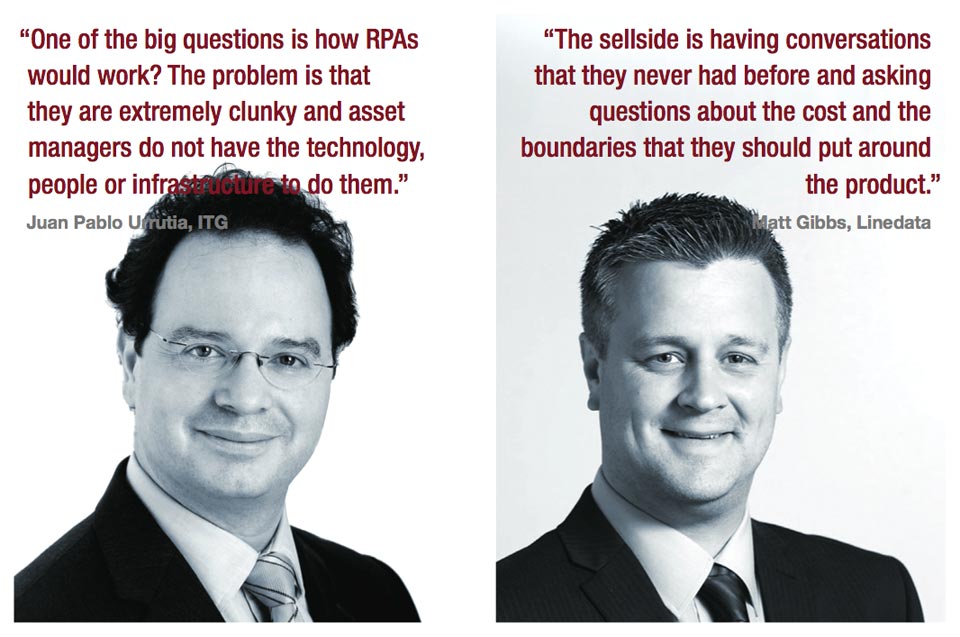 The sellside is not waiting for the MIFID gauntlet to be laid down and has already started to downsize or, in investment banking jargon, “juniorise” research and distribution teams. “Banks started to right size their research departments a long time ago,” says David Masullo, head of EMEA sales at Bloomberg Tradebook. “One of the good outcomes of this will be a greater focus on execution quality and I think we will see more resources dedicated to tools such as transaction cost analysis.”

Grob agrees that there will be a greater focus on best execution and that it will make the process much more transparent.

However, the downside is that the reforms will lead to a further reduction in the provision of small to medium sized enterprise coverage as banks restructure their research teams to concentrate on profitable research, predominantly the large caps.

“It seems inevitable that the total research pool will dry up and ‘less fashionable’ stocks or sectors may not be covered which, at the end of the day, will reduce investor choice,” says Grob. “For example, cyclical industries like coal may fall out of favour and then there will not be any research produced for these areas. It seems most likely that the sellside will develop a tiered pricing model, based around a platinum, gold and silver service for different clients which may leave some disadvantaged.”

Colon echoes these sentiments in his report by noting if “regulatory changes drive down institutions’ overall expenditures for research, even a modest reduction likely will have a substantial impact on the availability of research.” 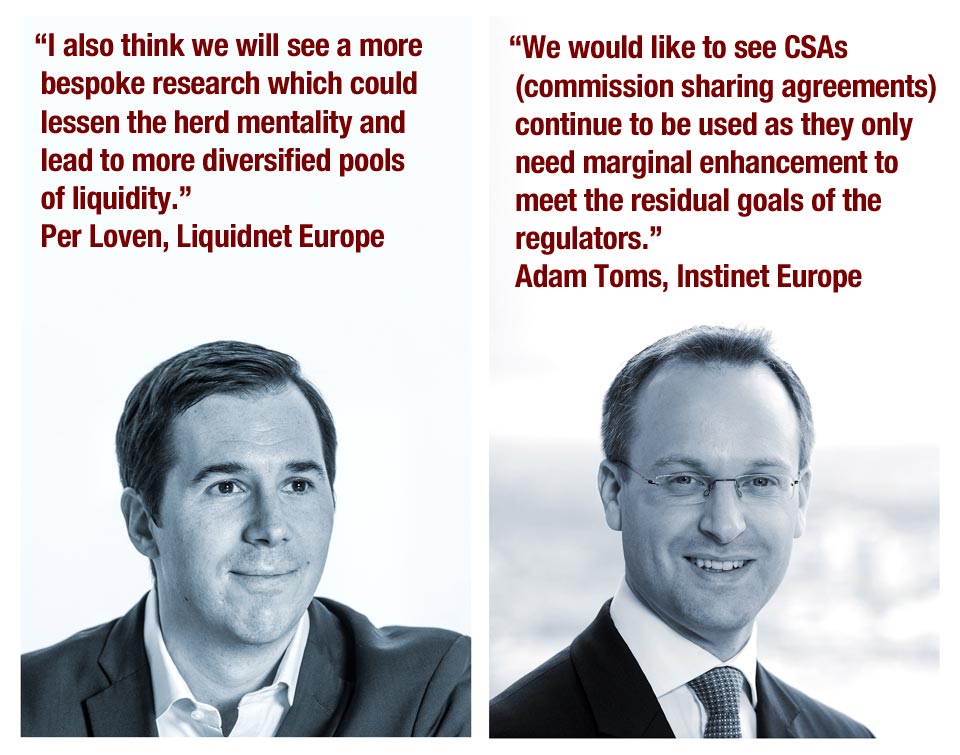 Although acknowledging concerns that certain companies and sectors may become neglected, Per Lovén, head of international corporate strategy at Liquidnet Europe believes the proposed new rules could give rise to new independent research providers and distribution networks. “I also think we will see a more bespoke research which could lessen the herd mentality and lead to more diversified pools of liquidity.”