Trading: The cost of market data

The rise and rise of market data

Heather McKenzie explores why market data costs always seem to be on an upward trajectory.

Whenever the cost of market data is discussed, trading firms could be forgiven for thinking it is Groundhog Day. Complaints that market data is too costly have been raised for many years, studies are commissioned and yet the cost of data continues to rise.

In March 2020, the FCA called for input to “better understand how data and advanced analytics are being accessed and used, the value offered to market participants and whether they are competitively sold and priced”. The watchdog intends to use the insights to determine whether it needs to do further work to address any harm that it identifies. The FCA has yet to publish any findings.

In November 2020, ESMA launched a consultation paper seeking feedback from market participants in relation to its draft guidelines on the MiFID II/MiFIR obligations on market data.

Speaking at an AFME conference in October 2020, executive director of ESMA, Verena Ross, said ESMA’s December 2019 report on prices for market data since the inception of MiFID II concluded that the directive had not delivered on its objective to reduce the cost of market data charged by trading venues and approved publication arrangements (APAs). 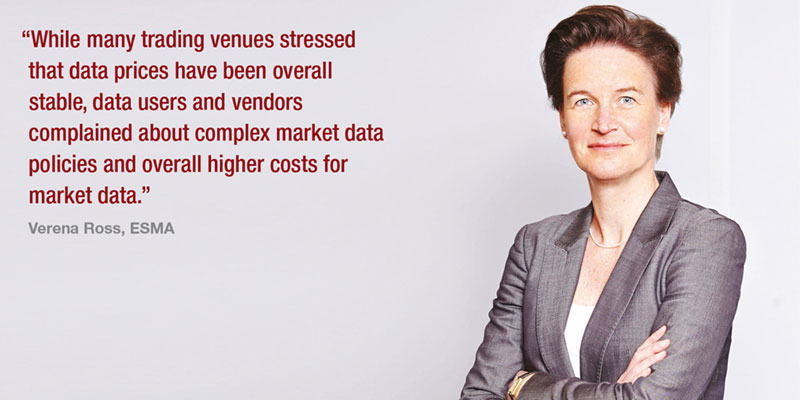 “While many trading venues stressed that data prices have been overall stable, data users and vendors complained about complex market data policies and overall higher costs for market data,” she said.

ESMA has estimated that for the period 2016-2019, the yearly expenditure on market data for a hypothetical firm had risen by about 27%, based on aggregate costs. Due to the mixed achievements of the market data provisions of MiFID II, it was “premature” to conclude that the current approach had failed and should be replaced by an alternative approach, such as price regulation, she said.

David Cook, executive director, regulatory affairs, at UK-based information provider IHS Markit, says while the cost of data has dominated the transparency debate and efforts made to reduce costs through disaggregation, the deeper data quality issues have not received sufficient attention or priority. 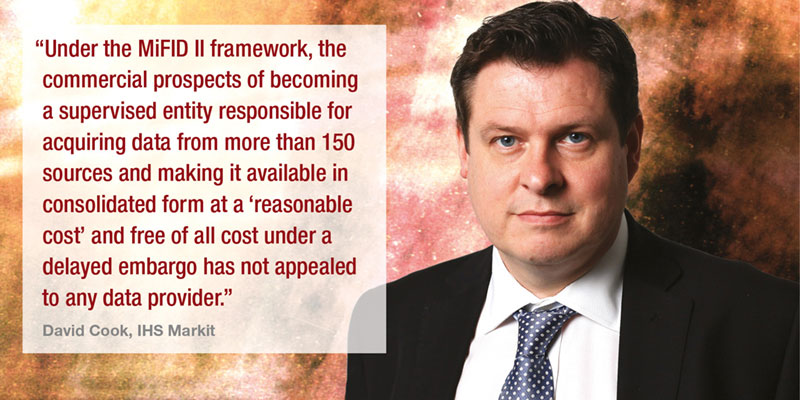 “Under the MiFID II framework, the commercial prospects of becoming a supervised entity responsible for acquiring data from more than 150 sources and making it available in consolidated form at a ‘reasonable cost’ and free of all cost under a delayed embargo has not appealed to any data provider,” he says.

Instead, he says, data providers have continued to make consolidated data available on their own terms, deciding for themselves which trading venues to include and how to consolidate and publish the data, resulting in inconsistent information. “Asking five different people how many shares were traded in Royal Dutch Shell today is likely to result in five different answers,” he says.

Fragmented landscape
The continued lack of a consolidated tape limits participation in European equity markets by professional investors and limits retail investors’ ability to monitor performance or hold agents responsible for best execution performance leading to decreased investor confidence, notes Cook. “The reduced participation in transparent markets increases volatility and cost of execution while reducing the quality of price discovery. These inefficiencies damage the health of European capital markets and dampen investment in the EU.”

ESMA’s Ross also noted the lack of a consolidated tape: “The fact that the cost of data has not improved has been compounded by the fact that no consolidated tape has emerged, which would provide live information on the price and size of equity trades.” While MiFID II designed the requirements that would be applicable for consolidated tape providers, it did not mandate the establishment of an EU consolidated tape. A voluntary, market-led initiative has never materialised.

“For ESMA, the main reasons why this did not happen are the limited incentives and commercial rewards to potential providers within the current regulatory framework, as well as possible competition by non-regulated entities such as data vendors,” she said. “Nonetheless, we strongly believe that the creation of a real-time consolidated tape for equities would counter concerns about fragmented access to market data.”

In recommending the creation of a consolidated tape, ESMA outlines key factors that would be “indispensable” to success, including the mandatory contribution of high-quality data by trading venues and APAs; the sharing of revenues with contributing entities; and a strong governance framework.

“Ultimately, this is a task which will require a substantial investment of both time and resources by all parties involved, but one which will benefit both brokers and investors greatly by providing a single source for price comparison,” says Ross. 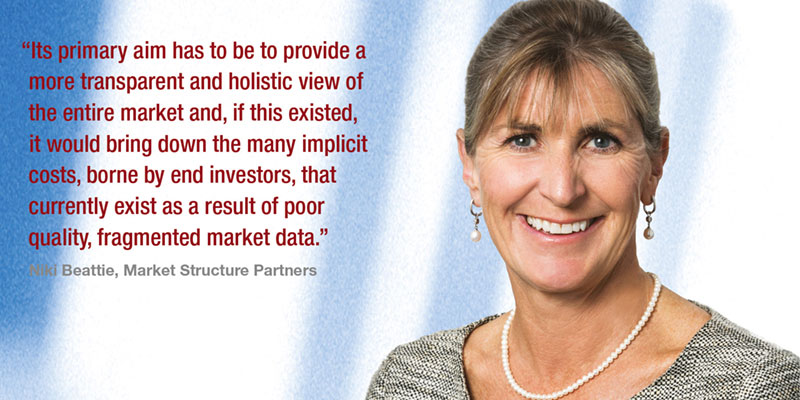 Shining a brighter light
Niki Beattie, CEO of financial market structure advisory firm Market Structure Partners, says while a consolidated tape is “a really important tool”, its main aim should not be seen as bringing down exchange data fees. “Its primary aim has to be to provide a more transparent and holistic view of the entire market and, if this existed, it would bring down the many implicit costs, borne by end investors, that currently exist as a result of poor quality, fragmented market data,” she says.

A report by the company estimated that the current cost of low-quality, fragmented data to the end investors is billions of euros. This has nothing to do with the cost of exchange fees, she adds.

To get to the point where data can be consolidated, says Beattie, the basis on which a consolidator is able to gather and then distribute exchange data needs to change. This would require a harmonised contract to take data from all exchanges and the consolidator, receiving it for free and onward selling it for one price, rebating the exchanges based on the value of the data they have contributed.

So exchange data fees, when amalgamated, might come down as a by-product of the consolidated tape, or at the very least the amount currently being paid for data might be more fairly distributed between all the venues that contribute to it and allow participants to see the whole market.” 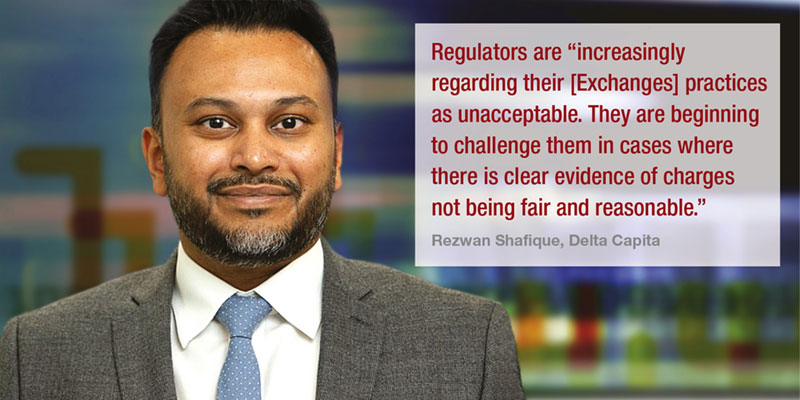 Rezwan Shafique, head of consulting UK at financial services consultancy Delta Capita, says while regulators in the UK, Europe and the US have not co-ordinated action on exchanges’ monopolistic business models, they are “increasingly regarding their practices as unacceptable. They are beginning to challenge them in cases where there is clear evidence of charges not being fair and reasonable,” he says.

A drastic solution would be to break up the monopolies of exchanges by splitting the market data functions out into a separate corporate entity, providing access to the data to everyone at a reasonable cost. Costs could also be lowered if organisations themselves developed their own internal capabilities to source, enrich and manage market data, thus reducing the amount of analytical and market services required from the exchanges.

Beattie is sceptical about the contribution regulators have made to bringing down the cost of market data. “Progress isn’t being made because policy makers are less concerned about financial intermediaries than they are about the end investors – intermediaries are usually deemed big enough to fend for themselves,” she says.

Moreover, many policymakers do not really understand the monopoly that each exchange has on its data or how the market has changed so that participants are now taking a smaller set of data than they did before for the same or a higher price. Despite being large for-profit owned monopolies, incumbent exchanges still hold an unjustifiably sacrosanct role in the eyes of national policymakers, she adds.

Finally sellside firms, in particular, are making the argument harder, “they want the cost of market data to come down but are mostly silent on the need for a consolidated tape. The former improves their margins and the latter does not, so the arguments are becoming confused and self-interest is clear.”