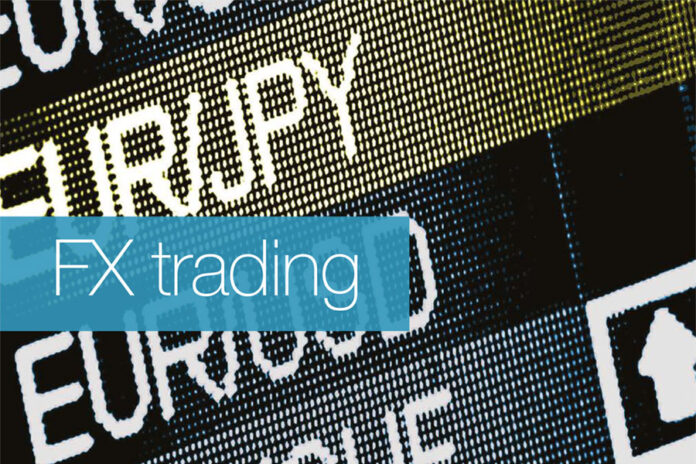 Gill Wadsworth assesses the toll geopolitical and macro-economics are having on the FX markets.

More than three months after Russia invaded Ukraine the conflict shows no sign of abating. The ramifications for the Ukrainian people are all too clear; at time of writing 6.7 million refugees have fled the country, while thousands of civilians have been killed or injured. The humanitarian crisis extends across the globe as those dependent on food and energy exports from Russia and Ukraine endure shortages and spiralling prices.

The international response to Russia’s invasion was unified and swift.

Russia’s central bank assets were frozen which prevented access to $630 billion of foreign currency reserves. This sent the rouble spiralling down by 22% and in turn pushing up the price of imported goods and leading to a 14% increase in Russia’s inflation rate.

Russian banks were also booted off the SWIFT payment system. Vladimir Putin’s response was to implement tough capital control measures including preventing residents from sending money to foreign bank accounts, while foreign-exchange payments under loan agreements to non-nationals were banned from March 1.

These steps turned out to be too effective and made the rouble one of the best performing currencies in the world having the perverse effect of endangering the country’s fragile economy.

In the wake of all this tumult, FX traders – already dealing with the challenges created by Brexit followed by the Covid pandemic – must manage additional volatility. 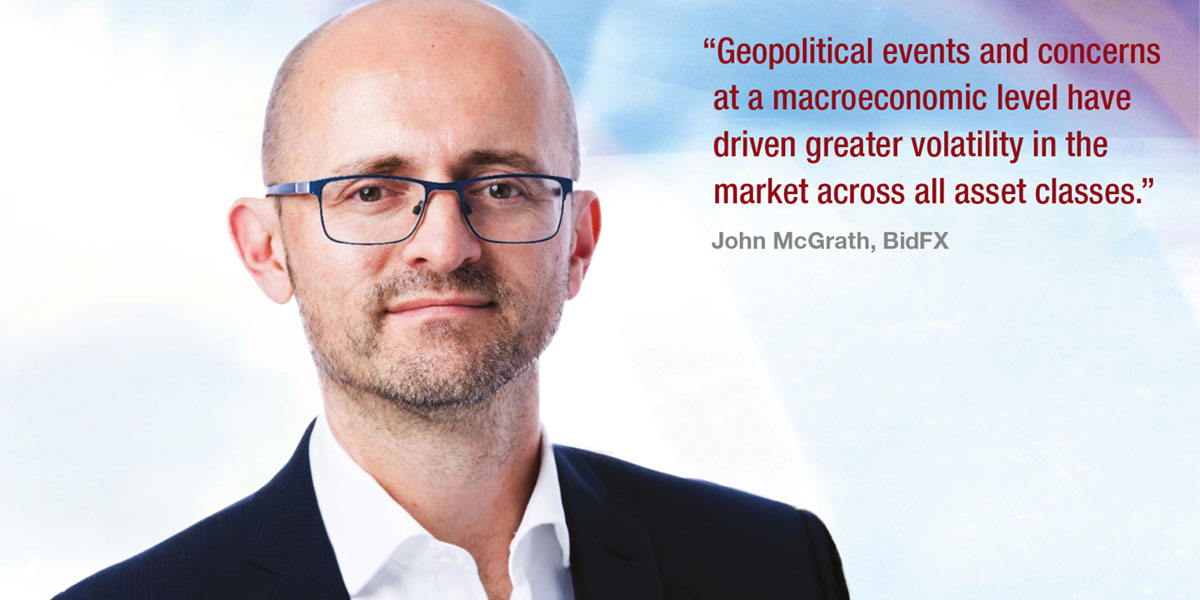 “Geopolitical events and concerns at a macroeconomic level have driven greater volatility in the market across all asset classes,” says John McGrath, chief revenue officer at BidFX. “From the Russia/Ukraine conflict to the Covid lockdown and monetary tightening in China, combined with other central bank announcements, have all driven FX volumes across all FX deal types including options. We don’t foresee any change in this as we head into June.”

“What does it mean when suddenly there is a military incursion into Ukraine? Do people want to get out of riskier assets and get into less risky assets? The answer to that is clearly yes which has an impact on liquidity,” he adds. 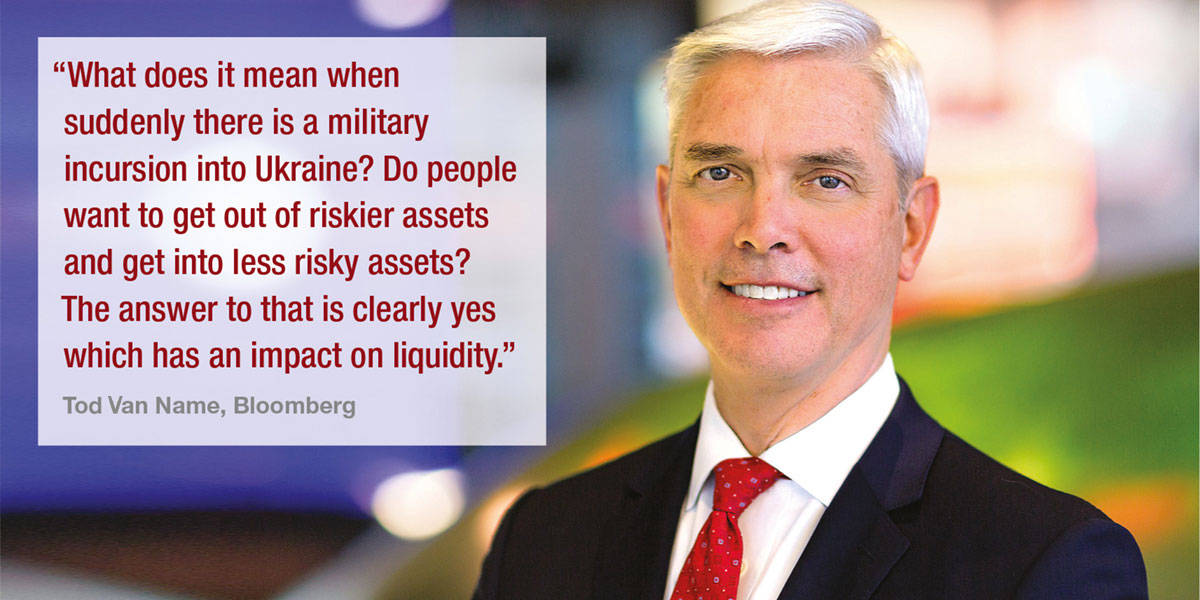 He continues “Since February, liquidity in the rouble changed dramatically for two reasons. Sanctions had a big impact on who was willing to quote or participate. Number two, the number of Russian firms that had access to financial markets decreased dramatically. You certainly saw liquidity in the rouble dry up and in other assets that were riskier, as well. Some emerging market currencies saw liquidity go down and spreads increase.”

However, Van Name says despite the liquidity concerns, the FX market remained “resilient”, continuing to trade thanks to advances in technology.

“You never saw a time when markets stopped trading or if certain participants did drop out of the market, you could always find other sources of liquidity,” he adds. “This resilience is because a lot of trading is conducted electronically.”

Resilient is the assessment shared by McGrath who says that ever since the March 2020 lockdowns, increases in electronic trading have proved the saviour for FX traders during challenging periods. “We saw in March 2020 as lockdown and pandemic fears increased the resilience of the eFX market as platforms, liquidity providers and consumers all reacted well to the volatility and uncertainty in the market,” he says. “There was no drop in liquidity in these time periods and the technology across all market participants has evolved to a very sophisticated state, whether you are dealing on bi-lateral multi bank platforms, via algos or direct with liquidity providers.” 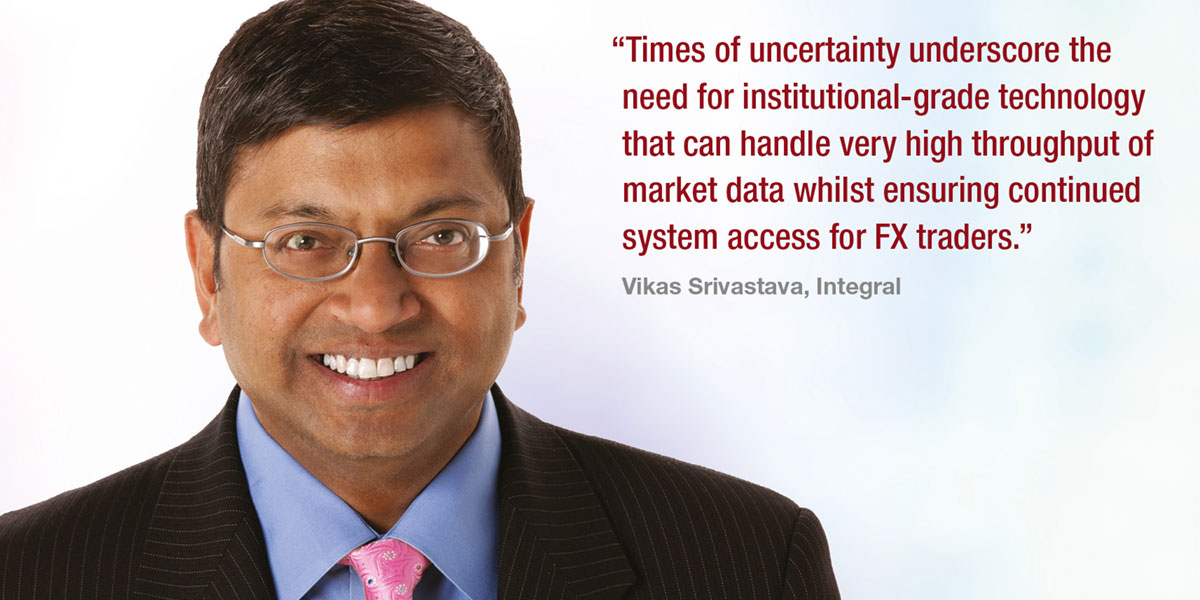 “Geopolitical events, such as the current conflict in Ukraine, result in increased volatility in FX markets,” he says. “Times of uncertainty underscore the need for institutional-grade technology that can handle very high throughput of market data whilst ensuring continued system access for FX traders. Modern SaaS [software as a service] technology delivers highly performant and reliable systems that allow market participants to conduct their businesses without disruption.”

Alongside war and global pandemics, FX traders must also grapple with a fragmented market as the number of liquidity providers and execution methods have grown ever larger.

While electronic trading has brought efficiency to the execution process, it also means increased post-trade complexity.

“A best of breed Execution Management System (EMS) is the most optimal way to address a fragmented marketplace as well as being the only real way to provide a true audit and best execution practice,” says McGrath. “A well-developed EMS can link you agnostically with multi asset and multi liquidity sources as well as providing transaction cost analysis (TCA), data and content management system services.”

Drilling down the costs

Transaction cost analysis (TCA) has been a consistent area of focus for FX traders as Van Name says, “they want to know how well they’ve done, manage their costs and their market impact”.

However, there is an increasing need to understand what might happen in a trade in the future, rather than simply analysing what has occurred in the past.

Daniel Chambers, head of data and analytics at BidFX, says, “Most financial institutions have some form of TCA in place and use it simply as a measurement of historical trading patterns. Effectively, all TCA products are based on historical information. This is all well and good, but this insight is based on what has happened, not what is likely to happen.”

Chambers believes TCA has been used for “regulatory box ticking” or an attempt to save on explicit and implicit trading costs. 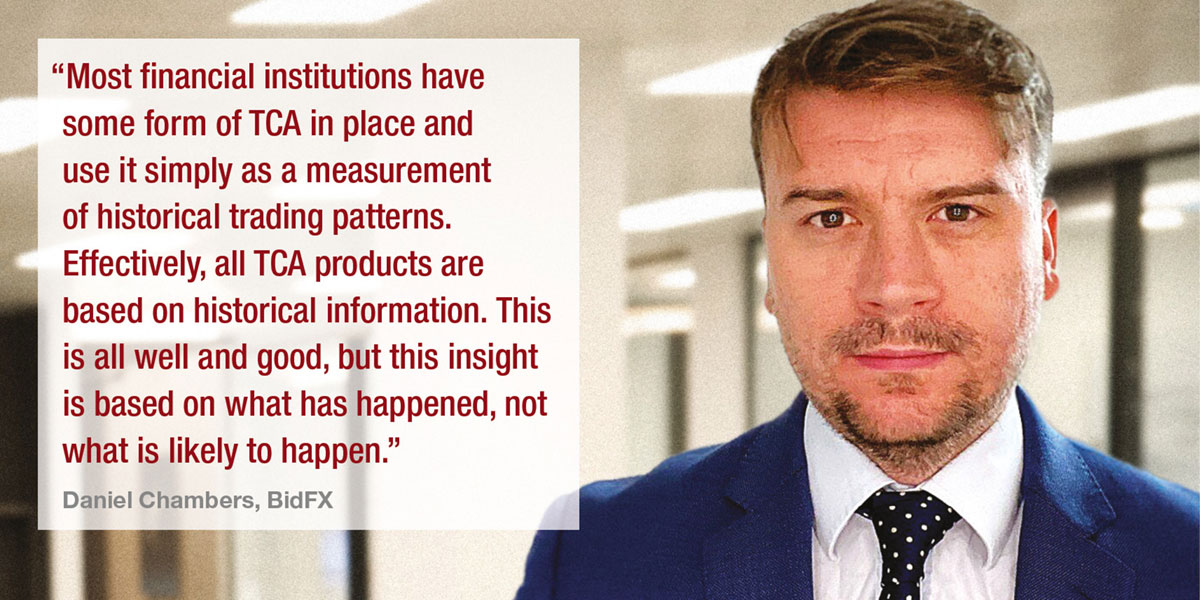 “But times are changing – and the need to capture the vast amounts of liquidity provider data is, slowly but surely, driving market participants away from the old TCA model,” he adds.

Chambers predicts that over the course of the next year more financial institutions will begin shifting away from TCA, towards Liquidity Provision Analytics (LPA).

“LPA moves away from measuring to see what has happened, to look into the underlying reasons why a trade is even happening. Take the example of an FX trader struggling to execute an order efficiently,” he says. “As a consequence of their struggles, there may well be a very big difference between the expected price of a trade, and the price at which the trade is executed. Now it is one thing knowing the slippage costs, it is another thing understanding exactly why the costs are slipping.”

For LPA to happen, however, Chambers says more data sharing is needed. “Numerous TCA third-party liquidity providers do not currently have access to the required data,” he adds. “They may have the transaction, reference, and benchmark data, but what they do not possess is information from every liquidity provider streaming prices. This is because many of them are not connected to the providers sitting between brokers and portfolio managers.”

Lack of requisite funding is also an issue according to McGrath who points to the buyside’s reluctance to spend on new technology as a barrier to innovation.

“The real block to buysides accessing this market [innovation] comes from the buysides themselves who, due to the enormity of a cross desk/department implementation for a new product, only initiate projects every five years. Many of the real money buysides in the market are still trading on antiquated platforms or workflow due to the project required to implement change always on a back burner. Many buysides are happy to continue on a platform designed 20 years ago as the alternative takes too much investment in time across multiple departments.”

Buyside FX traders have proven resilience in testing times thanks to automation. But there will need to be a considerable push to continue that electronification of the trading process if they are to keep delivering best execution in future.