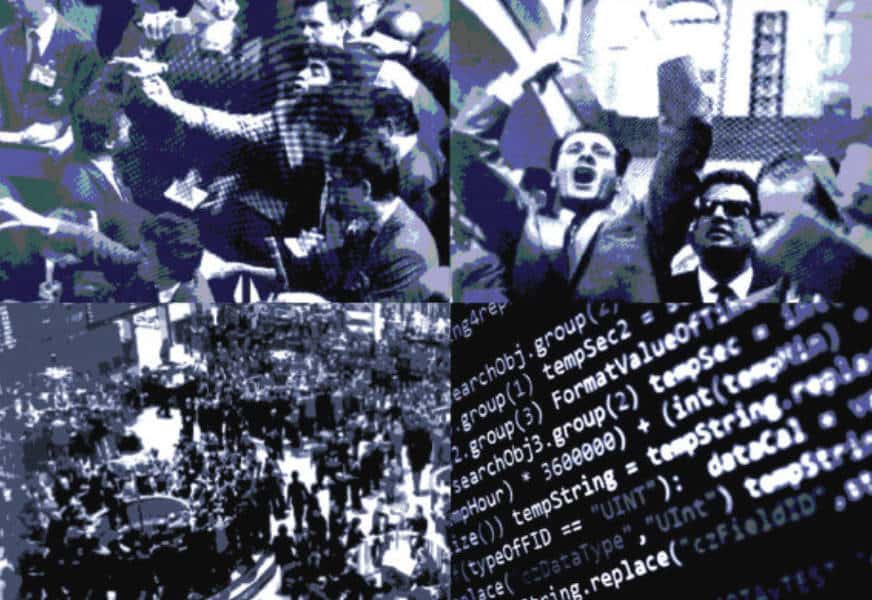 THE BROKER’S EVOLUTION – FROM TRADING FLOOR TO DIGITAL MARKETS.

Stock exchanges have come a long way since the 17th century when the buying and selling of different types of securities was conducted via an open outcry system called the pit. 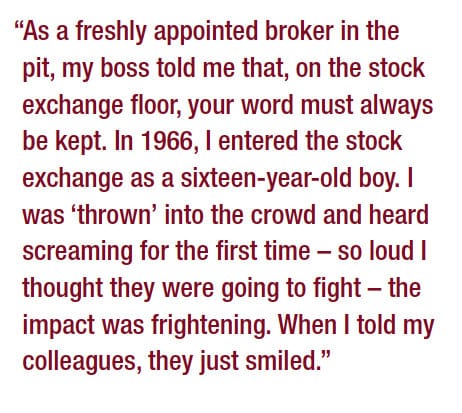 As this broker’s recollection suggests, chaos and confusion were the hallmarks of the trading pit. Traders would yell across the room to each other, even if they were right next to each other. This, unsurprisingly made communication between operators difficult. However, hand signals soon became the mode of communication and by the 1970’s their use was widespread. They were a fast, practical and effective means of communication over what could be long distances – as much as 30 or 40 yards – between the pits and order desks and within the pits themselves.

This chaotic and disorganised environment, however, had precise structures and rules, with brokers typically wearing colourful jackets and tags with acronyms to identify the person and the company the broker worked for. Working in the pit did not require particular financial skills or knowledge, such as pricing calculations or markets function, but depended rather on physical performance, mental lucidity, concentration, stamina and psychological skills.

This is because the broker had to execute multiple different orders in the shortest possible time, by catching the signals, shouting at the best counterparts and rapidly calculating the profit or loss from each transaction. Given the confusion and noise, it was easy to make mistakes which could lead to economic losses. Only a few people could withstand the pressure of the pit, especially as your word was your bond in every trade and so any cancellation or amendment was aborted to avoid any exclusion from future trades.

By the 1980s, floor trading at exchanges was being replaced by telephone trading and eventually by electronic trading platforms. These automated systems not only made the trading process simpler, but they also helped traders improve the speed of their trades, as well as reduce errors and costs.

There have been several iterations of electronic trading. In 1967, Instinet became the first major electronic alternative, where institutional investors could bypass the trading floors and deal with each other on a confidential basis. In 1971, Nasdaq introduced an automated quotation system that allowed broker-dealers to see the prices other firms were offering (and trades were then handled over the phone). The London Stock Exchange made the conversion and closed their trading floor in 1986, followed in 1992 by the CME’s Globex, the Borsa Italiana in 1994 and the Toronto Stock Exchange in 1997. Eurex debuted in 1998 and the Tokyo Stock Exchange switched to all-electronic trading in 1999.

While electronic trading became dominant, the open outcry method of trading did not completely disappear, although it is now only still used in a handful of, mainly, commodity exchanges.

The move through electronification, automation and now digitisation has completely revolutionised the trading systems as well as the role, capacity and behaviour of the brokers. In addition, it gave retail investors the opportunity to conduct trades on their own, thereby cutting out the need for brokers, dealers and other professionals to execute trades on their behalf.

Regulations like MiFID II are also driving greater automation in trading workflows and increasing the use of electronic trading venues. Data analysis has been one of the keys to bolster processes, accelerate record information, introduce more structured formats and address issues related to regulatory reporting, compliance or trade reconstruction.

As a result, the data must be displayed, consumed and analysed differently. With digital transformation, next generation collaborative tools and enhanced decision-making solutions traders can focus on value-added tasks. These are only some of the challenges faced by Market HUB, the electronic trading platform developed by Intesa Sanpaolo, to provide high quality services to its customers.

Investment in technology and increasingly automatic and AI-based (Artificial Intelligence) model applications are not only rewriting the way brokers operate but are also creating new business models and services. They not only help customers mitigate the risks of market events such as flash crashes and cyber-attacks but also leverage the opportunities. This is more important than ever in today’s environment of increased competition, squeezed margins as well as a wave of consolidation, as players look to create real economies of scale.

In this new scenario, the skills required in the trading room have changed. The focus is now on IT development, data science and quants. The number of people with degrees and PhDs in physics, engineering and mathematics has significantly increased because the implementation and development of automatic internal models or protocols is required.

His or her role will change but the broker will remain relevant in the trading process. Their skills will still be fundamental to create added value as well as to assume the role of guarantor on the correct functioning of the algorithmic trading codes.

Data as a nucleus

Data as a nucleus