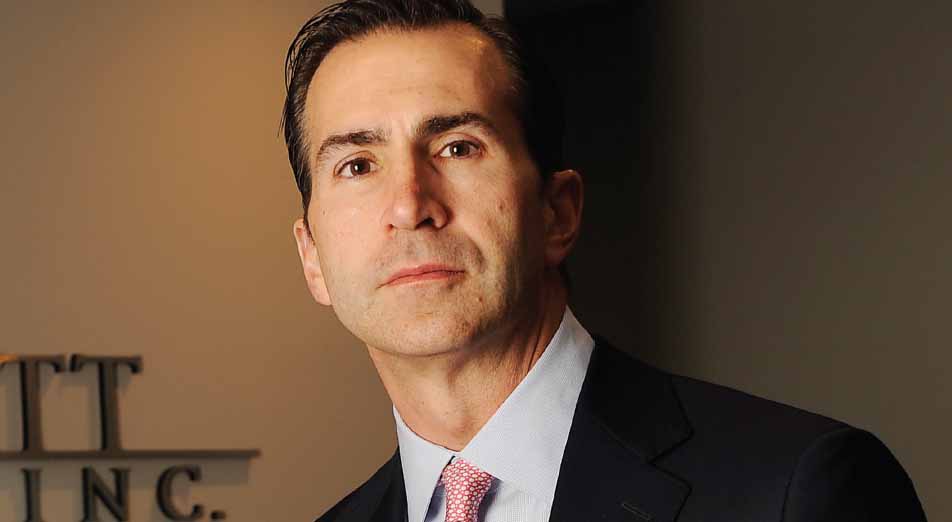 STEADY AS SHE GOES?

Joe Gawronski, President and Chief Operating Officer of Rosenblatt Securities talks to Best Execution’s Lynn Strongin Dodds about the path of regulatory change, both in the US and Europe, and whether there is a risk of divergence.

At the moment, it seems like the regulation in the US and Europe is diverging. How many changes do you think we will see in the US and what impact will this have?

We’ve been saying since the financial crisis that the US is unlikely to see a fundamental market-structure overhaul, despite repeated calls for one, particularly following the 2010 “flash crash” and the hoopla over the book Flash Boys – and we’ve been right. The changes have pretty much been limited to safety and soundness, greater transparency and pilots that do not have market-wide impact. In the immediate aftermath of the November elections, with anti-regulatory forces ascendant and Congress focused on other issues like health care, taxes and infrastructure, we thought the likelihood of sweeping change got even lower. And a much talked about Dodd-Frank rollback already seems a casualty of that.

More recently, however, there have been a lot of people in the industry – and in Washington – talking about the prospect of revamping Regulation NMS and, specifically, repealing the order-protection, or trade-through rule (Rule 611 of Reg NMS). A combination of longstanding ideological opposition from some people in Washington and an equally longstanding desire on the part of the brokerage industry for reforms that would reduce their operating costs are behind this. Big brokers are also pushing for a pilot programme to reduce the Reg NMS access-fee cap and for reforms to NMS plans that could trim exchanges’ market-data pricing power. These issues are likely to get a lot of airtime in the coming months and years.

And it appears likelier based on recent statements from Acting SEC Chair Piwowar that we’ll see an access-fee-cap pilot. But we see little likelihood of really big changes in the near term. Rule 611, for example, underpins so many other aspects of our market structure that simply repealing it in a vacuum is unlikely. And any reforms of this nature would take lots of time to debate, propose, comment upon, revise, approve and implement, so we’re talking years rather than months if they even happen. The real question we need to be asking ourselves is, “What about the current market structure, is it hurting investors or issuers?” And I think the answer to that is that the current market structure, although it could be tweaked in places, works pretty well and doesn’t need a wholesale revamping. Implementation costs are substantially lower for investors today than they were before market structure began a major evolution two decades ago.

What impact do you think MiFID II will have on dark pool trading in Europe?

European regulators have taken a very blunt approach to dark trading and the double-volume caps in particular seem particularly clumsy. We know that buyside traders value dark liquidity and you could argue that legislators put this to one side when crafting the MiFID II rules in this area.

The rules will require the buyside to reassess the way they interact with dark liquidity and will encourage a move to block trading, which is exempt from the double-volume caps. At the moment, there is a lot of talk about block trading and some platforms are enjoying steady growth. There may though be a natural ceiling because it is difficult to find the counterparty on the other side.

Our current estimates for dark trading – including the 19 venues that provide us with data plus estimates for broker crossing networks that do not report to us – is 8.5-9% of consolidated European turnover. This is likely to fall once the MiFID II volume caps come into force.

How do you foresee the landscape unfolding in terms of the switch from broker crossing networks to systematic internalisers?

There also has been a lot of discussion on the extent to which systematic internalisers will be able to replace BCNs. BCNs are popular because their operators have discretion over how the orders are matched. An element of this will be retained under the SI framework, but the key difference is that SIs can only be used for bilateral trades and cannot bring two client orders together. Nonetheless, SIs have some advantages – in that they only need to display pre-trade quotes up to a certain size and are not subject to the MiFID II tick size regime which means that they can offer quotes at better price increments compared with exchanges and MTFs. These benefits could make SIs an attractive source of liquidity and firms are gearing up for that.

Do you think unbundling will come to the US?

I’m glad you asked that as we’ve been following this issue closely for the past couple of years and our analyst in London, Anish Puaar has written about a half dozen reports analysing the soon-to-be implemented rules and their impact. Unbundling and the transparency it brings is a positive thing generally speaking, so we very much support the concept, though I’m not sure the regulators have thought through all the consequences of the new rules. With greater transparency and focus, the total amount of money being spent on research should shrink, but unfortunately will disproportionately affect research coverage of the smaller cap names – SMEs – that in other contexts the regulators say they are trying to help. It will also favour larger vs. smaller asset managers and give further advantage to more passive strategies vs. active management. It will also not prove to be the boon to independent research some pundits predict as the big banks will still get their pound of flesh in a shrinking research pie environment with managers needing access to the IPO and capital markets calendar that makes them a lot harder to cut, whatever the stated inducement rules. 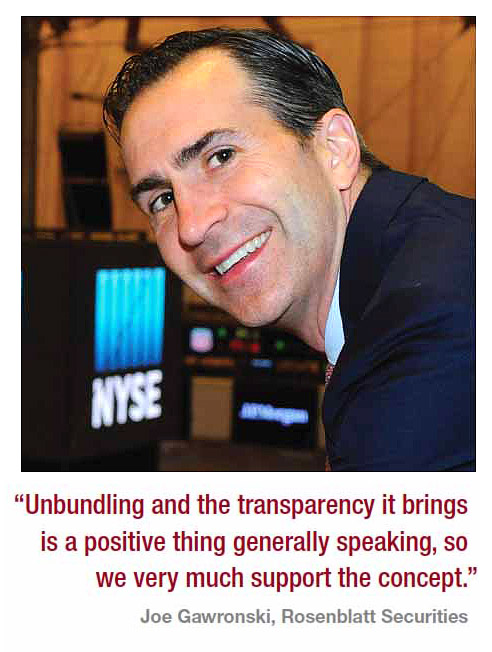 As to the question of whether it will cross over the pond, I firmly believe it will. It won’t be driven by new regulations here, however, as the SEC and industry here seem content with our 28(e) soft dollar rules. Rather, it will be driven by market and competitive pressures. Not only will global asset managers want to adopt one set of rules for operational ease, but end clients will get used to the level of transparency they receive under the new regime in Europe and start to demand that level of transparency across their providers, and the big consultants will push them in that direction as well.

How has the relationship between the buy and sellside changed?

Brokers have always complained about increasing costs, but as exchanges moved from mutual to for-profit models and gone public over the past 15 years or so, the transaction fees, market data and technology charges they assess have grown as they try to hit their quarterly numbers and deliver growth.

Combined with declining commission rates from clients over that same period and the increasing costs of regulatory compliance since the financial crisis, we’re now at a point where the sellside is shouting louder than ever. And the buyside joined that chorus for the first time last year, becoming an ally in the fight to pressure exchanges on the cost front. Why? The big firms are tiering their clients and the buyside doesn’t want service levels reduced. If they can partner with the sellside in helping control their costs, they figure they can better maintain service levels, even if they can’t find a way to increase their commission wallet.

How is Rosenblatt responding and what things have changed?

While we have remained true to our agency brokerage roots, we have evolved with the markets. First, as always, we continue to look for ways to squeeze basis points out of performance for our clients. For instance, as others have contracted markedly on the NYSE floor, we’ve expanded – in fact, becoming the largest floor broker. Parity and other advantages give the floor demonstrable out-performance that make the extra investment in personnel worthwhile.

Second, as the markets fragmented and became way more complex, starting with the order handling rules in the late ‘90s, decimalisation in the early 2000s and Reg NMS in mid-2000, we invested heavily in understanding the new market structure and sharing our analysis with customers. We were really the first broker to do this. The research we produce, along with the execution consulting and transaction analytics we provide to customers, help them make better routing choices and improve their quality of execution.

Third, the fact that execution-only is how we grew up didn’t prevent us from entering the fundamental research space when we saw an opportunity created by conflicted, undifferentiated research and, again, saw others heading for the exit.

We’re used to competing in a wind in your face business and know that done right – with customers put first – there’s a good business. As usual, we don’t try to be all things to all people and instead pursue under-served niches, so our research is focused only on a sub-segment of financials – exchanges, where we have deep market structure and regulatory expertise that offers a differentiated viewpoint – and technology, media and telecom (TMT). And, while we continue to expand there, we’ve also partnered with about a dozen foreign banks and brokers in emerging and frontier markets to provide corporate access, research, blocks and capital markets transactions to under-served US investors. As a boutique, partnering with leaders in these markets has enabled us to punch above our weight on the research front.

Biography: Joe Gawronski is the President and Chief Operating Officer of Rosenblatt Securities. Joe was formerly a securities lawyer with Sullivan & Cromwell, a Vice President in the equities division with Salomon Smith Barney and COO of Linx, a block trading ATS. He received his B.A. in Public and International Affairs at Princeton’s Woodrow Wilson School and his J.D. from Harvard Law School. He is a member of the Advisory Board of the Journal of Trading and a member of the Board of the National Organization of Investment Professionals.