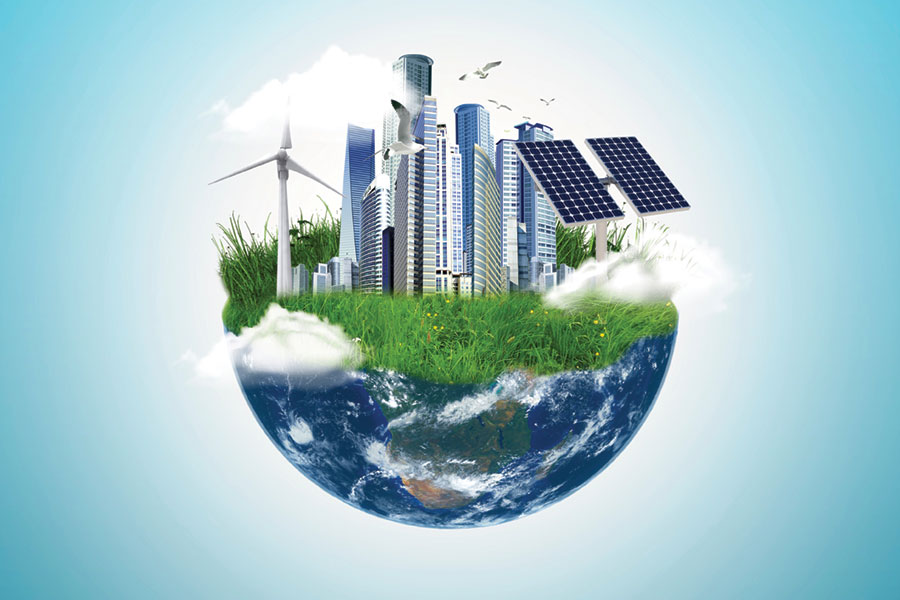 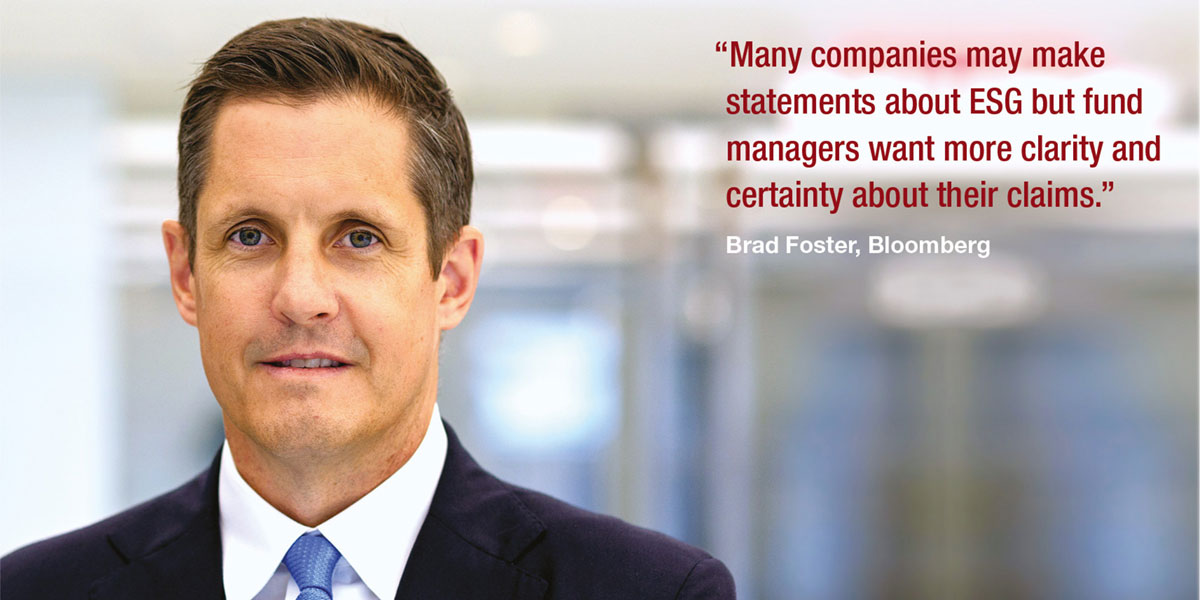 Lynn Strongin Dodds looks at how analysts are trying to hold companies accountable for their green credentials.

As sustainable funds capture the hearts, minds and wallets of investors, companies will no longer be able to rest on their marketing laurels. Analysts will have to do some serious digging and not just rely on structured or unstructured data but also old-fashioned conversations if they want to get a genuine picture of a company’s operations.

“Greenwashing is not a new concept and it has been around a long time,” says Brad Foster, global head of enterprise data content at Bloomberg. “The pressure has been ratcheted up by stakeholders due to the sheer amount of capital that has gone into funds that have any kind of sustainability link. Also, we are seeing increased regulation which aims to stamp out greenwashing. Many companies may make statements about ESG but fund managers want more clarity and certainty about their claims.”

Over the past two years, fund flows into ESG funds have soared but like the data that tracks them estimates veer wildly. For example, Bloomberg Intelligence and the Global Sustainable Investment Alliance (GSIA) put the global ESG market for all ESG assets at around $40tn, and estimate the figure to surge to $50tn by 2025. However, Morningstar research showed that investors worldwide poured $142.5bn into sustainable funds in the fourth quarter of last year, a 12% jump on the previous quarter. That culminated in total global sustainable assets reaching $2.7tn across more than 5,900 funds, three-quarters of which were in Europe.

What is certain though is that a greater light needs to be shone into the marketing spin of many companies. This is particularly true on the environment where reducing the collective carbon footprint in line with the Paris Climate accord has become a main selling point to stakeholders. However, last August, a report by climate think-tank InfluenceMap laid bare these claims and found that 421 out of 593 ESG equity funds it assessed had portfolios that were not in sync with the targets to reduce global warming to well below 2°C, and preferably to 1.5°C, compared with pre-industrial levels

The research, which used widely accepted PACTA (Paris Agreement Capital Transition Assessment) methodology to measure alignment, further found that 72 out of 130 climate-themed funds had missed the mark. This included three out of four funds marketed as “Paris-aligned” which in fact frequently held investments in the likes of oil companies Chevron and ExxonMobil and pipeline company Kinder Morgan. Cutting through the noise

It is easy to see why getting to the truth is not that easy. Hortense Bioy, director of Sustainable Research, at Morningstar believes that the growing demand for investment strategies that incorporate ESG factors has led to a proliferation of funds claiming to be sustainable or “green”. The financial data provider recently took a harder look at its own portfolios and culled 1200 stocks from its ESG funds representing more than $1 trillion in assets because they weren’t achieving their stated ESG goals.

Another issue is that sell side analysts tend to rely on ratings agencies, according to Charles Boakye, ESG & Sustainable Finance – Equity Analyst at Jefferies. “It is not that transparent a process and many of the rating agencies end up with scores that are in a black box. There is a lot of data that is scraped from companies themselves so it is not an independent exercise.”

Steve Malkin, CEO of sustainability and net zero certification company Planet Mark, agrees adding, “Companies of all sizes can struggle to collect simple data that accurately details energy, water and waste usage. Measuring Scope 3, often a company’s largest source of emissions, is proving to be especially difficult and requires trusted third-party providers to provide the required rigour to ensure the credibility of such data.”

He notes that the “the lack of sector wide consistent regulation for ESG reporting makes it extremely challenging for investors to confidently distinguish between investments with robust ESG credentials and those that are making misleading claims about their environmental standards and performance. The issue with greenwashing is that if it is detected, it not only undermines the reporting of that organisation but it can bleed through and undermine the reporting of all companies. This can be highly corrosive.”

Dr Richard Mattison, President, S&P Global Sustainable, echoes these sentiments. “Unlike financial data, ESG or sustainability data is not globally regulated and open to interpretation,” he says “What that means is that you are often comparing apples to oranges but the pressure is increasing because companies are taking ESG reporting much more seriously and instead of corporate communications putting out the reports they are now completed by analysts and submitted by the investor relations team.”

While many in the industry would like to see greater standardisation, this is likely to be a long and arduous process, if the accounting profession is anything to go by. “If you look at international accounting standards, for example, there is room for interpretation but they do prescribe what you need to report from a financial perspective,” says Mattison. “If there is variation, you have to report what the variation is and why. This is much harder with climate because there’s significant scope for variability. For example, some companies will report on headquartered country operations, but not operations in China.” 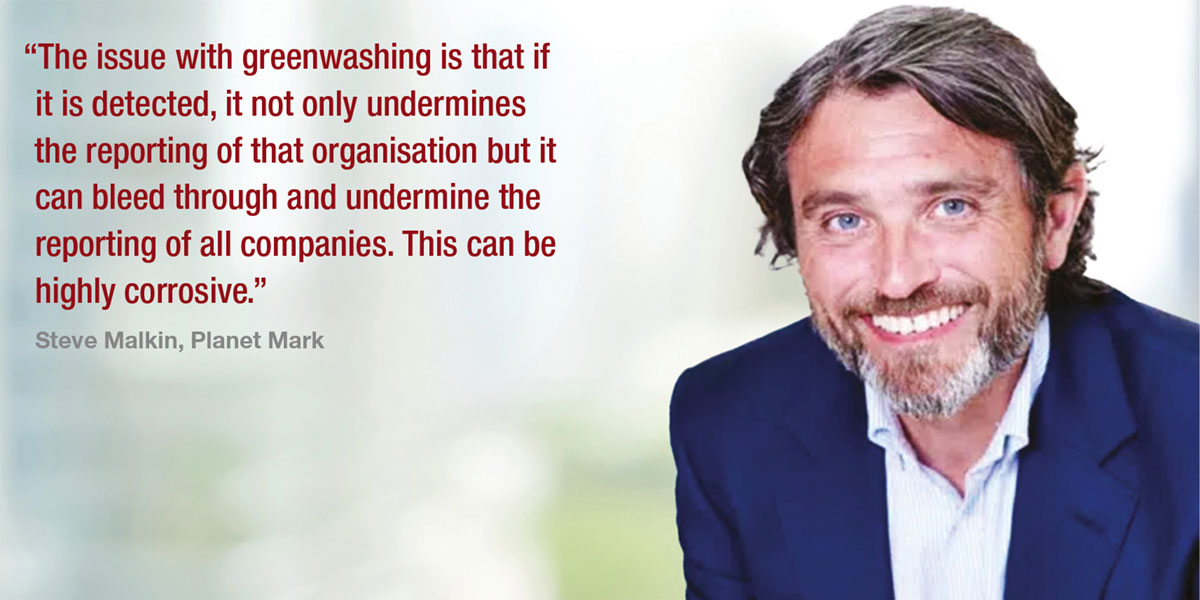 However, analysts are developing their own frameworks. Bioy believes it’s possible to determine a fund’s green credentials if the fund reports sustainability metrics. Investors can also use third-party ESG metrics and ratings to assess the greenness of a product or a manager’s sustainability credentials. “The key is finding the right data points, ratings or scores to assess the ‘greenness’ of a portfolio,” she says. “In many cases, investors will have to use a combination of metrics and ratings to get the complete picture, and make sure the investment aligns with their objectives and sustainability preferences as much as possible.”

Engagement should also not be underestimated, according to Mattison. “The research is very important and needs to be useful but it allows us to hold a mirror up to the company and have a conversation about their practices and where they can change,” he adds. 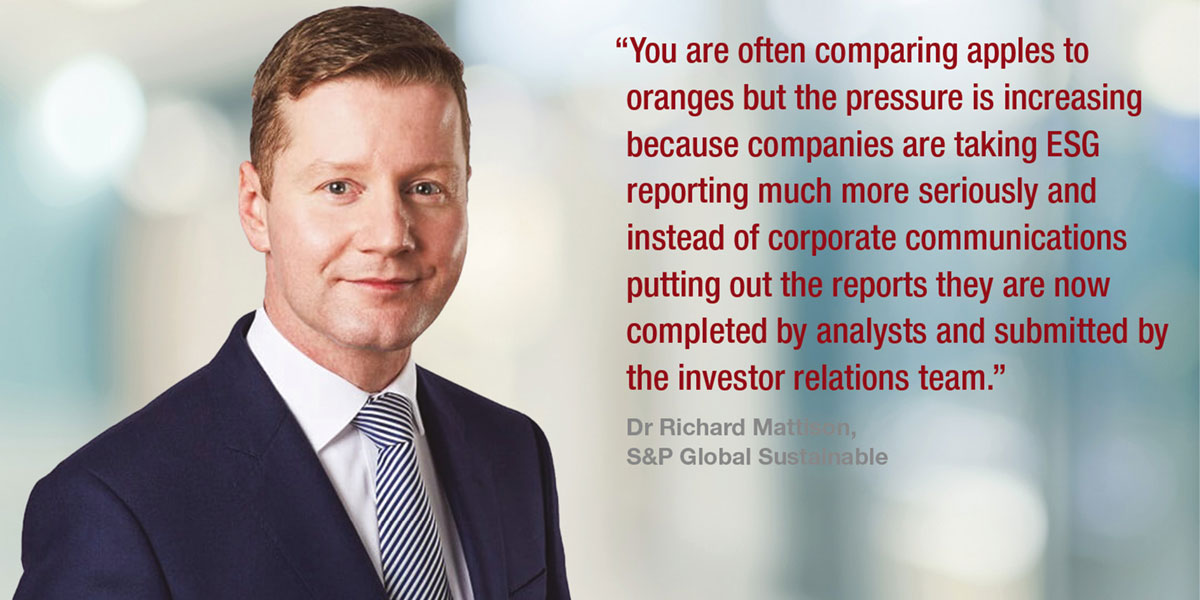 Boakye agrees, noting that it is crucial to engage with companies. He says that Jefferies drills down to what are the most material risks to a company from an ESG perspective and how that will impact the bottom line. “We work with sector analysts but one of the best ways to get a real sense of what is going on is to sit across a table from the management and discuss what they are doing.”

Looking ahead, market participants are also hoping that global standard-setting bodies such as the newly formed International Sustainability Standards Board can help address some of the main issues of accountability such as the lack of a common baseline for disclosure standards consistent across jurisdictions and industries.

Foster also believes that regulations such as the Sustainable Finance Disclosure Regulation (SFDR) and EU Taxonomy as well as the Task Force on Climate-Related Financial Disclosures (TCFD) will make a difference and provide guidance. “For example, there are key performance indicators around climate related risks that analysts and investors can look at when a company issues sustainable debt,” he adds.