Research: A change of heart 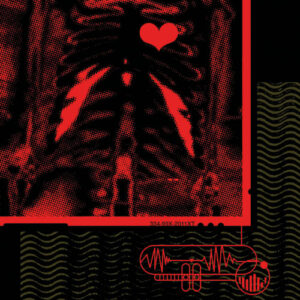 Lynn Strongin Dodds assesses whether the FCA and European Commission’s reversals will have any impact on small cap research.

One of the biggest concerns of unbundling under MiFID II was that small to medium enterprises (SME) would lose their already dwindling audience of research analysts. The impact is still not clearcut, but UK and European regulators are concerned and rolling back some of the rules to help boost this cohort’s popularity and liquidity. The jury is out as to whether they will be successful.

In a paper published earlier in the year, the European Securities and Markets Authority (ESMA) absolved MiFID II of responsibility. The watchdog said it found no material evidence that the rules separating research from execution had limited the availability and quality of research on SMEs.

However, it admitted that the legislation did not help address the long-standing issues at play in this universe. The paper said, “In absolute terms, SMEs continue to be characterised by a lower amount of analyst research, higher probability of losing coverage, worse quality of research and limited market liquidity.”

One of the main reasons that coverage has suffered is that SME research is not seen as commercially viable as it is for the larger cap companies. Many market participants believe that MiFID II has only exacerbated the situation as many asset managers decided to shoulder the burden and pay for research out of their own P&L instead of charging end clients. The bottom line literally was that research became the second largest expense after staff compensation, shifting the focus even more to their bigger, liquid and lucrative counterparts.

As Steve Kelly, Special Adviser to Euro IRP notes, “It’s undeniable that SME research has been declining in scope and depth for a long time. The MiFID II rules may have accentuated this trend, but no more than that. As such, relaxing these rules is unlikely of itself to alter the underlying dynamic here. This can be seen by the fact that only about 1 in 5 IRPs offer SME research – it costs as much to do it properly as it does for a large cap stock, yet the potential market on the buyside is limited. Coverage of SMEs will continue from corporate brokers, and others may enter the fray, but not to any significant extent.” 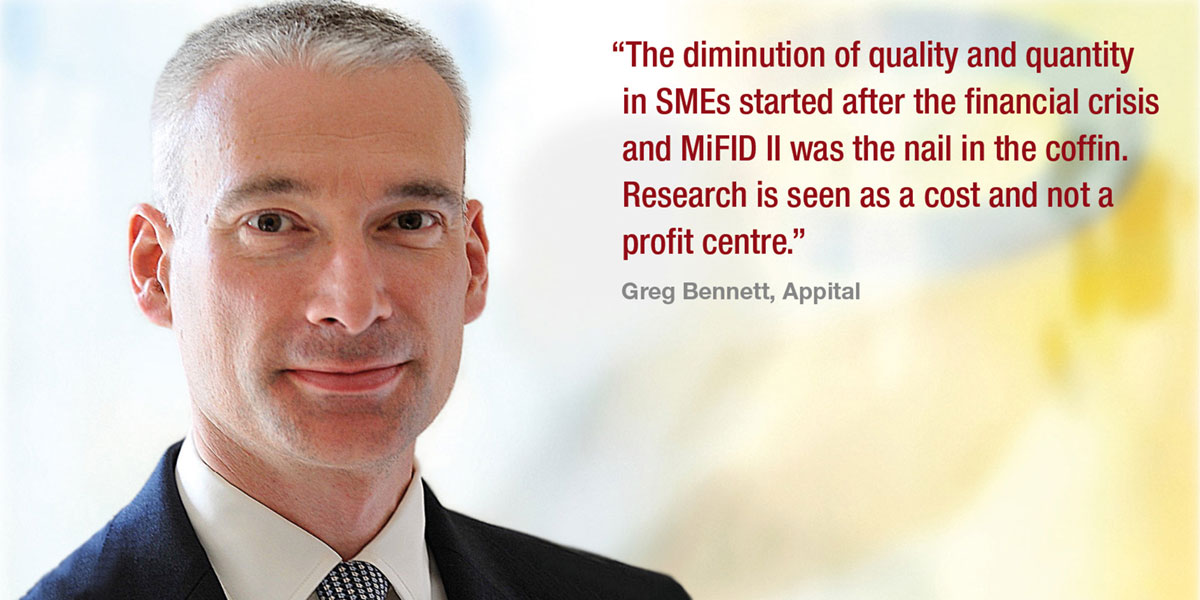 Greg Bennett, chair of equity capital marketplace Appital, agrees, adding, “The diminution of quality and quantity in SMEs started after the financial crisis and MiFID II was the nail in the coffin. Research is seen as a cost and not a profit centre. What we saw after the Spitzer review, was that investment banking and research were separated. Banks needed to cut costs and as a result, teams of four were reduced to three, research became juniorised and that lowered the quality of the research. It has been like a snowball rolling down the hill.

Elliot Spitzer, the then New York attorney general, led an investigation into abuses during the dotcom boom which led to a $1.4 billion global settlement in 2003 that rewrote the rules for stock analysts. He campaigned for the independence of equity research from investment banking while at the same time the then UK’s Financial Services Authority launched a similar effort to get brokers to charge fund managers separate fees for their share-trading and other service such as the use of a data terminal or equity research

Fast forward to today and the European Commission as well as the Financial Conduct Authority (FCA), the successor to the FSA is trying to restore some kind of balance in the post Brexit world. Under the Commission’s so-called Quick Fix Directive, firms will be allowed to re-bundle costs for equities research and execution for small and mid-cap companies below a €1 billion market cap. They will though be required to inform clients that they have entered into an agreement with the research provider to identify the portion of any payments attributable to research. The EC did not make any changes relating to fixed income research.

Bonds were also left out of the FCA’s blueprint which is encapsulated in its Wholesale Market Review. The UK watchdog has had to tread carefully given it was the main architect of unbundling for the MiFID II mandate and it did not want to appear to be back peddling. Unbundling was not popular with French and German authorities who wanted to keep the status quo.

This may explain why the FCA opted for a much lower market cap threshold of £200 million for exemption. It contends that this is the level where the research coverage is at its poorest, based on data indicating that almost all companies above this threshold have some form of coverage already. 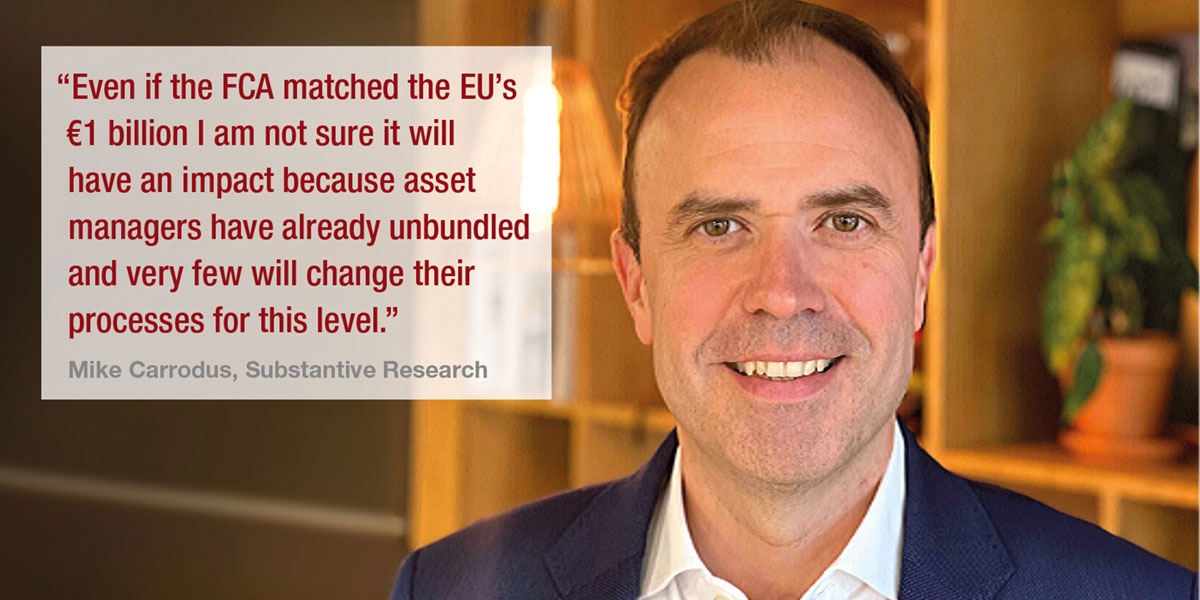 However, many market participants believe the level is too low and will not generate interest. “The FCA has made an attempt to alleviative the problems with small to mid-size cap research but according to the buy side in the UK the £200 million cap is too small” says Mike Carrodus, Founder and CEO of Substantive Research, “However, even if the FCA matched the EU’s €1 billion I am not sure it will have an impact because asset managers have already unbundled and very few will change their processes for this level.”

Daniel Carpenter, head of regulation at Meritsoft, a Cognizant company, says, “I think each market will be impacted differently depending on the level of small cap research. For example, Sweden and the UK have some of the biggest players in this space. However, one of the problems is that if you are a big firm and have already unbundled, how do you allocate research under the new rules. Do you go back to soft commission dollars or commission sharing agreements?” 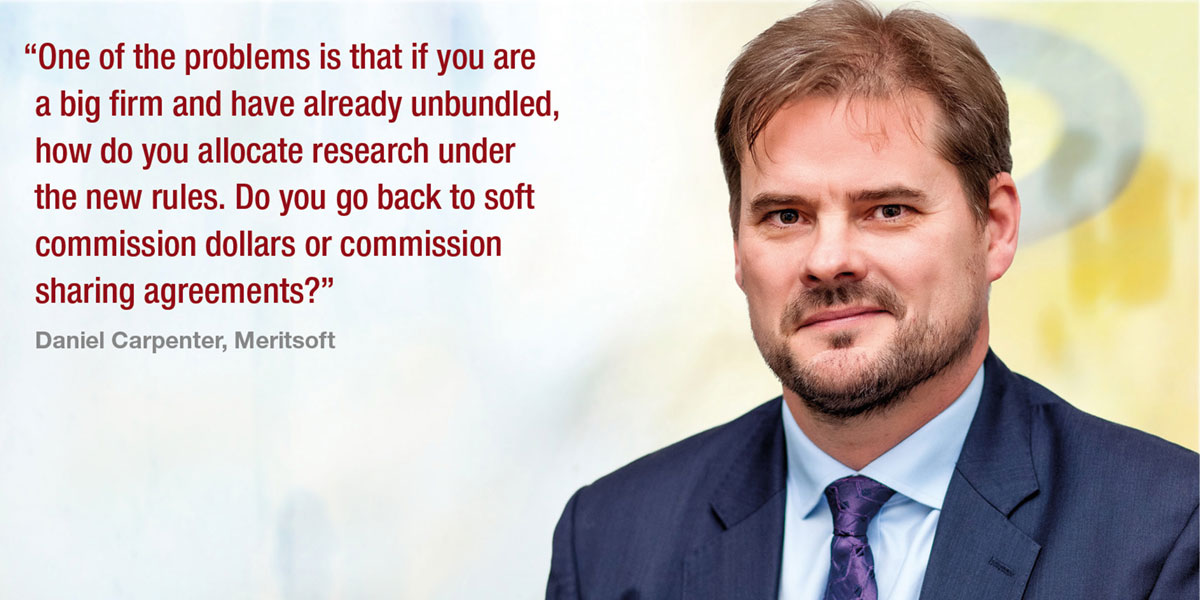 In other words, many buyside firms may decide that it is simply not worth the investment. “There are two considerations,” says Kelly. “Firstly, for most asset managers, SME stocks of this size are only a small part of their overall holdings, and secondly, there are not inconsiderable operational issues in defining this research distinctly, and then securing agreement from end clients that the costs of such research can be met through bundled payments funded by the end clients.

While few believe that the regulatory changes will generate greater in-depth coverage, some fund managers are developing new ways to analyse the sector to unearth alpha generating opportunities. This is particularly true of Anglo South African bank, Investec which recently launched its Searchlight fund that covers 50 stocks with an average market cap of £500m. 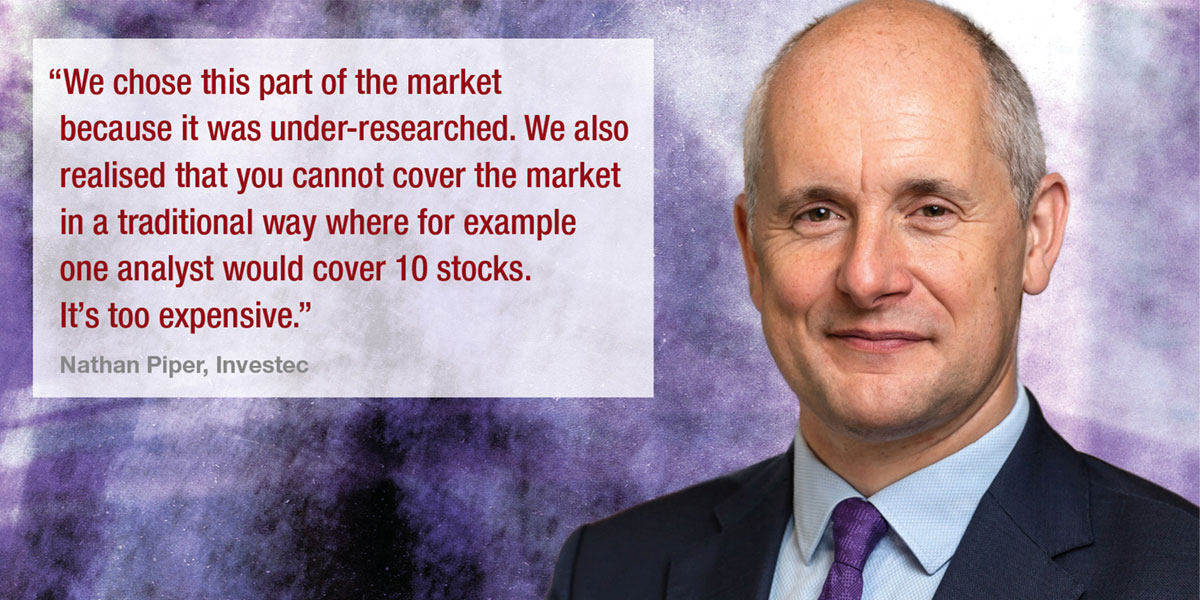 Nathan Piper, head of oil & gas research and Searchlight at Investec believes that £500m is the right threshold because there are enough companies with potential in that space. However, the team does not apply conventional research but uses a combination of Porter’s five forces, and Dupont analysis along with historic analysis to identify companies that have the best competitive advantage and return on investment, according to Piper.

Developed by Harvard Business School professor Michael Porter, the Five Forces Model is a business analysis tool that examines the relative strength of five primary market dynamics that govern competition within virtually any industry. Dupont analysis provides an insight into a company’s strengths and weaknesses by breaking down return on equity into three parts: profit margin, asset turnover, and leverage.

“We chose this part of the market because it was under-researched,’ says Piper. “We also realised that you cannot cover the market in a traditional way where for example one analyst would cover 10 stocks. It’s too expensive. We generate a two-page report on the stocks we cover with our analysis on the stock, but the aim is not to issue sell or buy recommendations but highlight investment ideas.”