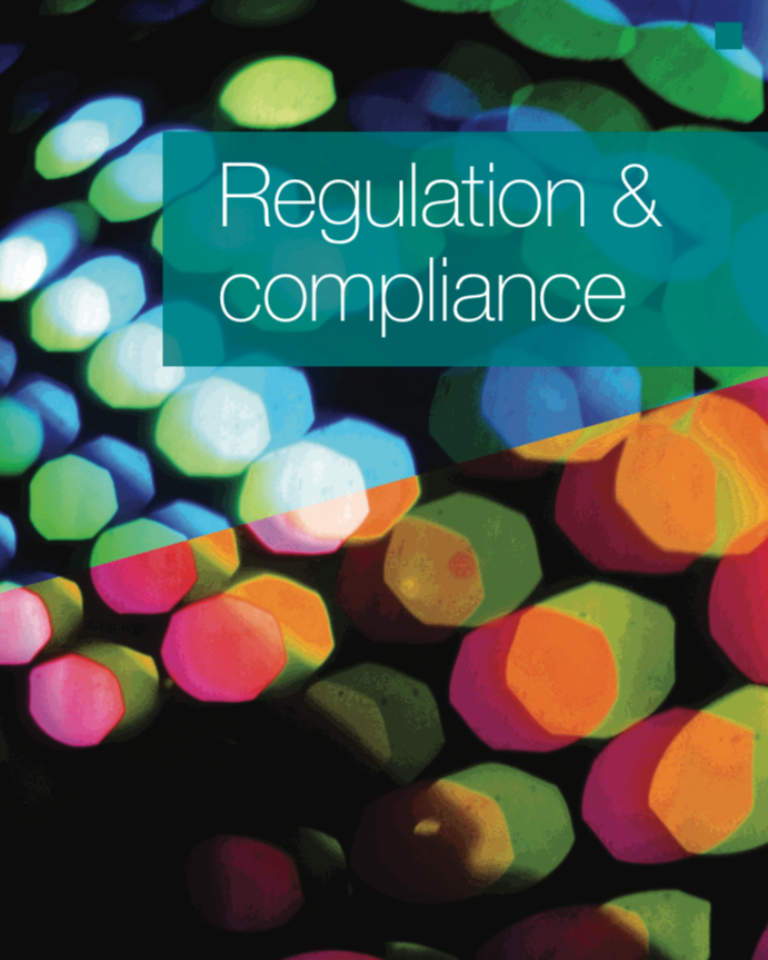 Unbundling has been a long time coming but as Gill Wadsworth explains, it may not level the playing field as hoped.

It took fewer than six months for a financial regulator to investigate how institutions were responding to MiFID II, but opinions are divided as to whether it has raised or lowered the bar.
In June, the UK’s Financial Conduct Authority revealed it had cause for concern over some organisations’ failure to get behind the spirit of the new rules on research unbundling. In its 2018/19 business plan, the FCA announced that it would “focus on ensuring that firms are complying with these changes and assess if the rules are working as intended”.

The unbundling element of MiFID II was paramount in achieving the Directive’s aim of improving transparency and fairness across the industry. Rather than receiving reams of research – much of it spurious and unused – from the sellside as part of long-established relationships that involved many other services, the buyside would be required to pay for this information separately.

Research would be a distinct service, for which asset managers would not only need to pay but demonstrate how they paid. The aim was to improve research quality, level the playing field between independent research providers (IRPs) and potentially standardise the costs.

Russell Dinnage, managing partner at consultant GreySpark, says: “The reasonable expectation, commonly held within both the sellside and IRP investment research industry, is that these MiFID II-generated requirements on consumers will naturally lead to a more competitive, commoditised, price-agnostic landscape for content and services.”

Dinnage says MiFID II was designed to foster a ‘race for quality’, where only providers of genuine, valuable research would exist. “Some of the historical bulk providers of investment research content and services [will be] challenged to justify the quality of the value-add of their product to their client’s investment decision-making workflows and processes,” he adds. 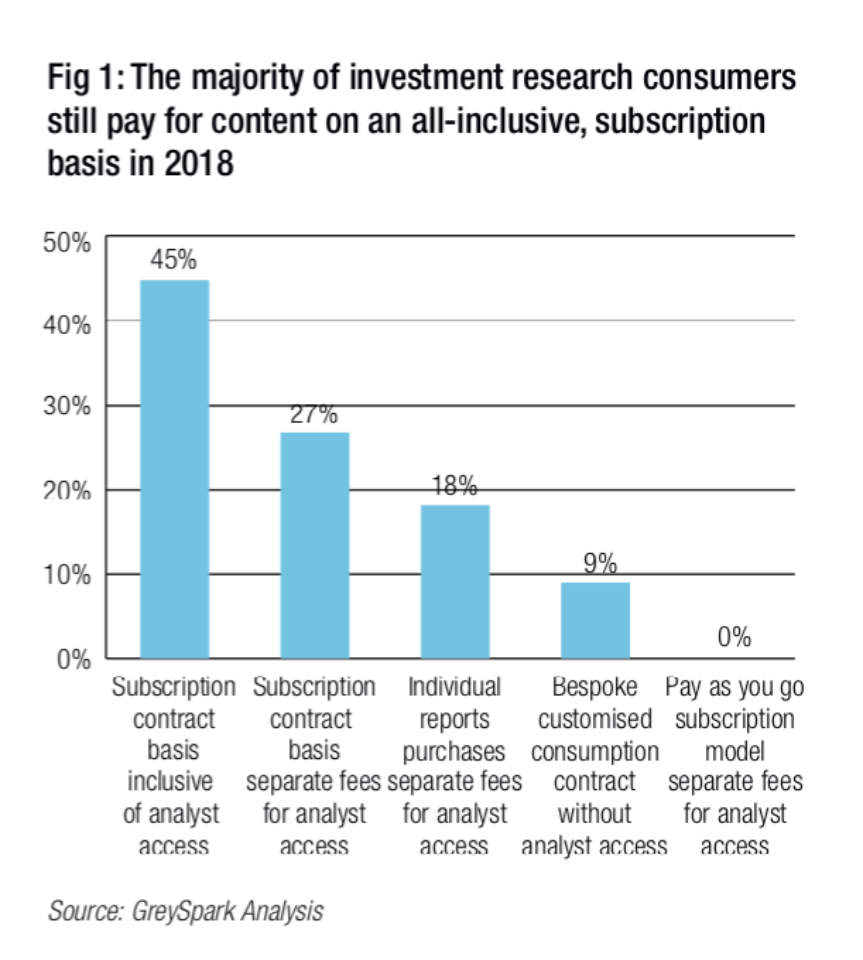 “In some cases, the end result could see banks and non-bank brokers lose clients and subsequently no longer be able to justify the marginal costs associated with manufacturing and distributing their content, potentially abandoning the line of business entirely.”

Yet in reality the interpretation of MiFID II by some organisations has meant that rather than a race to quality, there has been a race to the bottom. In August 2017, JP Morgan Chase was the first investment bank to reveal it would charge a fixed fee – $10,000 – for entry level equity research. This was heralded as the start of a ‘land grab’ as investment banks realised that under MiFID II they would be forced to compete for previously captive clients.

Rather than risk losing a client to an IRP, many investment banks have chosen to cross-subsidise the cost of their research to keep costs low. Arzish Baaquie, managing director, UK at Smartkarma, an IRP, says over the past six months more banks have followed the JP Morgan route. “In my view this will continue. Some might say it is not fair but it is difficult for the regulators to clamp down on since there is nothing illegal going on. If you are a large investment bank with deep pockets, it makes sense to cross-subsidise,” he adds.

Shallow pockets
The challenge though is for IRPs without deep pockets to keep pace with their multi-billion-dollar banking competitors. The result, Baaquie warns, is that as prices plummet so too will research quality. “We could see a race to zero,” he says.

Figure one shows that rather than unbundling research, the majority of buyside consumers are still paying an all-inclusive fee. “So-called premium equities and fixed income research packages – in which clients are provisioned with access to both content and analyst access – typically remain priced on a per annum, per client enterprise-wide subscription basis,” says Dinnage. “These packages are typically vended in a manner similar to a retainer paid to a consultancy or law firm in which clients pay a fixed minimum amount that can be drawn down over time.”

In other words very little has changed, or rather not enough has changed. Indeed, under these persistent arrangements it might be argued that it will be difficult for buyside firms to provide EU regulators with a ‘clear audit trail of payments made to research providers and how the amounts paid were determined with reference to the quality criteria’, which is demanded by the European Securities and Markets Authority (ESMA). It is understandable then that the FCA is taking another look at compliance in this area.

A further complication for the market dynamic comes from asset managers’ preference to pay for research from their P&L rather than using the research payment account (RPA) method. Baaquie says this makes sense, describing RPA as “clunky”. However, he says there are consequences for research providers. “Favouring P&L over RPA is a catalyst for change,” he adds. “Research budgets have been cut on average by about 20-30%, leading asset managers to ask what research they really need. They are a lot more particular about what they buy.”

A fork in the road
The question then is whether asset managers will be willing to move outside of their low-cost relationship with investment banks, to find demonstrably high-quality research from elsewhere.
The challenge for IRPs, according to Chris Turnbull, co-founder of Electronic Research Interchange, is getting in front of the buyside. He says investment banks enjoy an established relationship with asset managers outside of research provision, working together across many areas. IRPs, meanwhile, are much more limited. 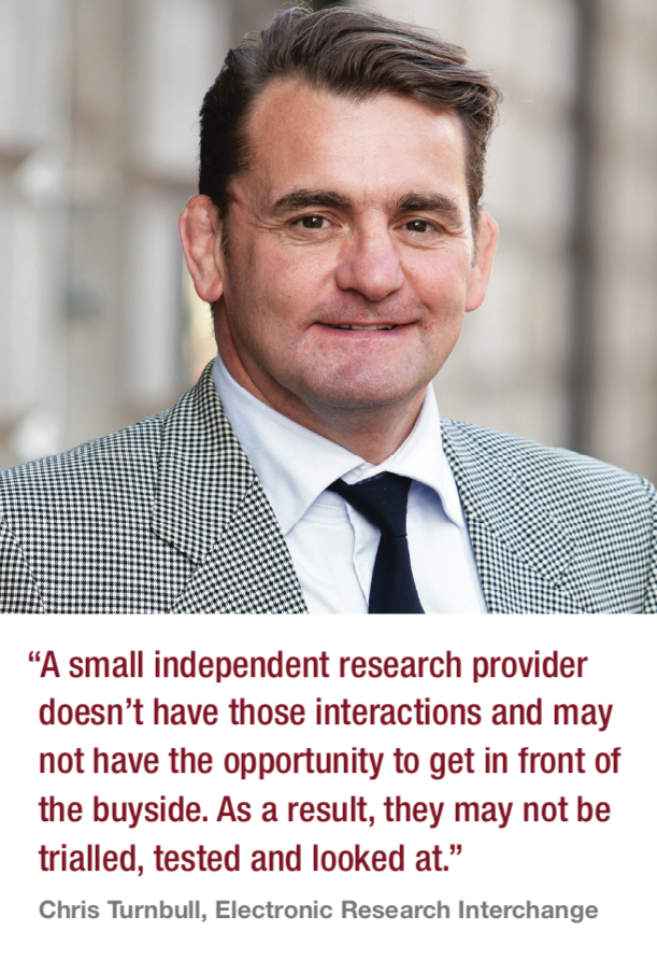 “A bank has lots of different touch points with fund managers and they speak with the buyside constantly. A small independent research provider doesn’t have those interactions and may not have the opportunity to get in front of the buyside. As a result they may not be trialled, tested and looked at,” Turnbull says.

The danger is that small IRPs may start to go out of business as they fail to amass the client base necessary to survive in a post-MiFID world. Baaquie says consolidation in his space is already apparent.
Smaller asset managers are struggling, too. A global poll of 418 managers by RSRCHXchange published in June revealed the unbundling regulation ‘has hit smaller asset managers and small cap companies hardest with 82% believing it would result in reduced coverage for small and midcap stocks’. Nearly half (45%) of respondents from the smallest asset management companies feel worse off as a result of reduced research access.

The ultimate impact of unbundling regulations in MiFID II are far from clear. As Turnbull says the repercussions will be felt for many years, not all of which will be desirable.

A clearer view of research, its importance and value are important outcomes, but there are unintended consequences too. If research providers pull back from providing data on smaller markets such as the emerging or small cap, then investors will suffer. If larger firms dominate both the buyside and sellside, it is again to the detriment of the consumer.

The FCA review is welcome but the watchdog will need to iron out numerous challenges, none of which are obviously dealt with. Ultimately action needs to be taken swiftly before the industry changes irrevocably and potentially for the worse.