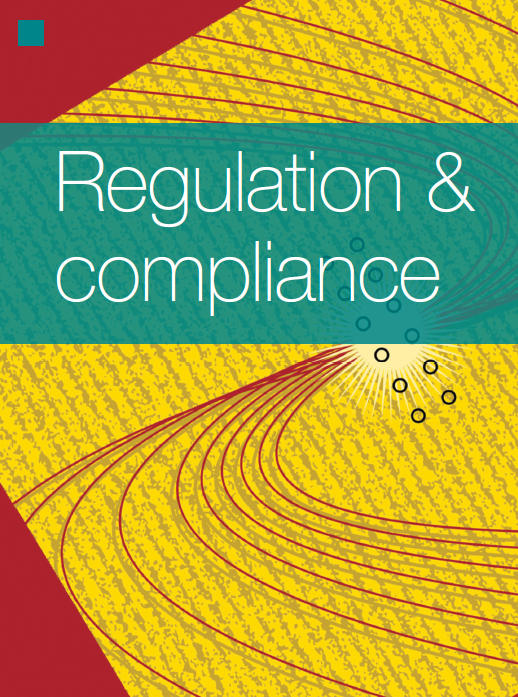 THE LONG AND WINDING ROAD OF SFTR.

Lynn Strongin Dodds looks at the state of play and whether firms are ready for the new regulation.

There have been several twists and turns in the Securities Financing Transaction Regulation (SFTR) journey but the finishing line is in sight. There are still kinks to be ironed out but the general view is that the legislation will see the light of the day next year. This means that market participants, many of whom are not ready, need to put their collective foot on the pedal.

Their level of unpreparedness was highlighted by a recent study conducted in August and early September by regulatory service provider Cappitech and Kaizen Reporting. Canvassing 87 banks, asset managers, trade repositories, agent lenders, brokers and non-financial entities, it found that two-thirds did not expect to be fully ready by the April 2020 deadline.

The study noted that banks, who are due to go live in the first wave, were in a better state although 56% were still only in the pre-implementation planning stages. Overall, only 37% of the securities lending industry had started or completed SFTR implementation and expected to be ready in time for the launch date. Around 11.5% though had not even begun to get their SFTR houses in order.

Drilling down into greater detail, the study revealed that 40% are also still undecided regarding which trade repository (TR) they are intending to use. While tier 1 firms often decide based on board seats and shareholdings, market pricing will be key for the rest and most TRs have not yet published detailed pricing data. As for the thorny issue of unique trade identifier matching, 54% of respondents believe they need to integrate UTI matching, with another 33% still considering it.

This seemingly indecisive stance may not be as surprising as it sounds, according to the study, in that the industry went through a similar scenario with MiFID II and the European Market Infrastructure Regulation. Many firms were not prepared nine or six months before the launch date of these regulations but it did have an impact on the quality of the data being reported.

In the SFTR case, the situation has been exacerbated by the uncertainty regarding some of the requirements. The regulation was first mooted in 2014 to foster greater transparency and introduce, among other things extensive transaction reporting requirements. The regulatory technical standards outlining the rules were published in March 2017 by the European Securities and Market Authority (ESMA) but the European Commission did not ratify them until the following July.

In the meantime, ESMA provided a number of iterations of its Q&As in order to clarify the original technical specifications, in the hope of avoiding issues that arose with EMIR. Fast forward to today, and the regulator launched a consultation paper in May with responses published in July. However, as Jonathan Lee, senior regulatory reporting specialist at Kaizen Reporting, points out, there are still a few fundamental questions that need to be clarified in order to support a timely build for SFTR reporting.

According to Lee, some of the key outstanding questions include whether to provide full reports or the delta of changes for modifications and corrections. In the consultation, respondents overwhelming voted for full reporting. He adds that there are also concerns about the availability of data for reporting and some confusion about the reporting of settlement fails. “The general consensus was that perfect settlement would be assumed unless both parties chose to modify a transaction to reflect a default or extended fail,” he adds.

Unique trade identifiers have also raised issues in terms of what to do if a counterparty who is responsible for providing the UTI does not do so in a fast and efficient manner for reporting. Lee says “The real question is how the party subject to late notification of the UTI by their counterparty can be excused from their obligation to submit timely reports.”

The clock is ticking 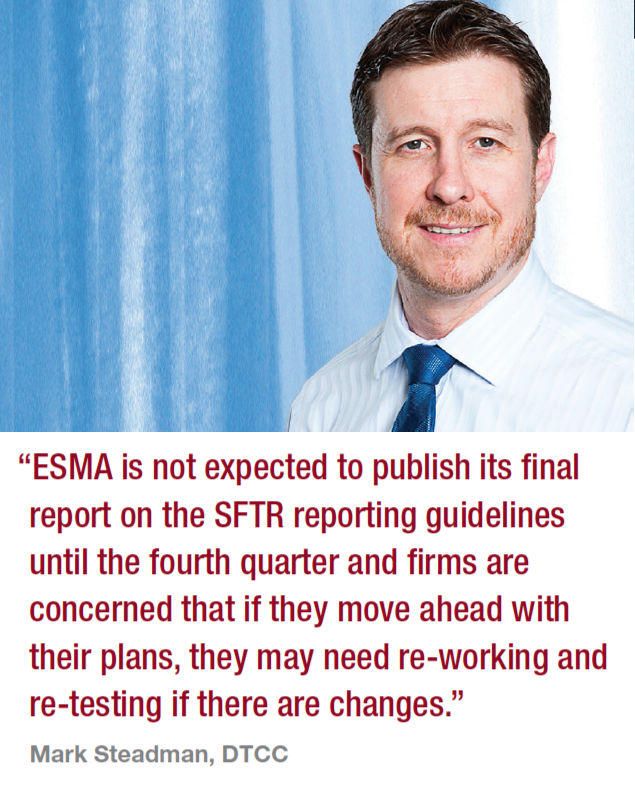 The challenge for the industry is that the answers to these questions are not expected until later in the year. “ESMA is not expected to publish its final report on the SFTR reporting guidelines until the fourth quarter and firms are concerned that if they move ahead with their plans, they may need re-working and re-testing if there are changes,” says Mark Steadman, executive director at The Depository Trust & Clearing Corporation (DTCC).

He adds, “there is still time to prepare but it is fast running out. Some firms are further along the way than others. We have several firms testing with us already seven months prior to the go-live date; however, we also have clients who are still responding to RFPs (request for proposal). “

Brian Charlick, risk and regulation, financial services at CGI, concurs, adding, “There are still a few final touches that need to be confirmed and although people know the general direction of the regulation, the devil is always in the detail. Part of the problem is that the regulation is so much more complicated than EMIR and Dodd Frank.”

Overall, the SFTR mandates 155 data fields, compared to 129 required under EMIR for OTC derivatives and 65 for MiFID. The problem is that although the fields may be more in line with EMIR, 40% of the 155 are not readily available today and firms will have to conduct an audit to locate the data. Also, the reporting will have to be submitted in a specific format – ISO20022 – to trade repositories for the first time and reconciliation will be required across 96 fields. The regulation places a significant emphasis on data reconciliation by trade repositories and publishing aggregated reports on a daily basis.

While many market participants may not be ready for SFTR, vendors and clearinghouses have taken up the mantle and have been busy developing new solutions individually as well as together. “Although ESMA’s reporting guidelines have yet to be fully finalised, there are partnerships in the industry who are working to cover as much as of the reporting headache as possible,” says Peter Moss CEO, SmartStream Reference Data Utility (RDU), which recently launched a cloud-based security reference data service to simplify and enable firms to meet the SFTR requirements.

He adds, “the trade repositories are the most advanced because they are a foundation of the SFTR service. From our perspective we provide reference data, which is an awkward set of data to pull together because it comes from half a dozen different places. Our goal is to remove the complexity from sourcing high-quality reference data and enabling firms to focus on managing their business.”

Meanwhile, UnaVista part of London Stock Exchange Group, has recently extended its Partner Programme to include consulting firms. Launched in 2017, it played a significant role in helping firms prepare for MiFID II. It has since been rolled out to SFTR as well as further upcoming regulations and amendments to existing regulations. The current roster includes 53 software firms or ‘independent software vendors’ and 19 consulting firms.

“We are working with the industry in an open access model and also run training courses to help clients understand the nature of the regulations,” says Mark Husler, CEO, UnaVista. “There are several industry challenges such as reference data, unique trade identifiers and the ability to capture all lifecycle events which in some cases such as evergreen trades are quite complex.”

Looking ahead, as with many of the post financial crisis regulations, the SFTR offers firms the opportunities to automate processes, generate greater efficiencies, improve overall end-to-end pricing. “We’ve seen a significant move towards electronic trading on our platform in the last few years, and I think that will continue both for efficiency and regulatory reasons,” says Tom Trott, repo product manager at Tradeweb. “The client-to-dealer repo market was almost exclusively traded via voice, a highly manual and error-prone process. However, now with SFTR even more clients are looking at ways to automate their repo workflows.”