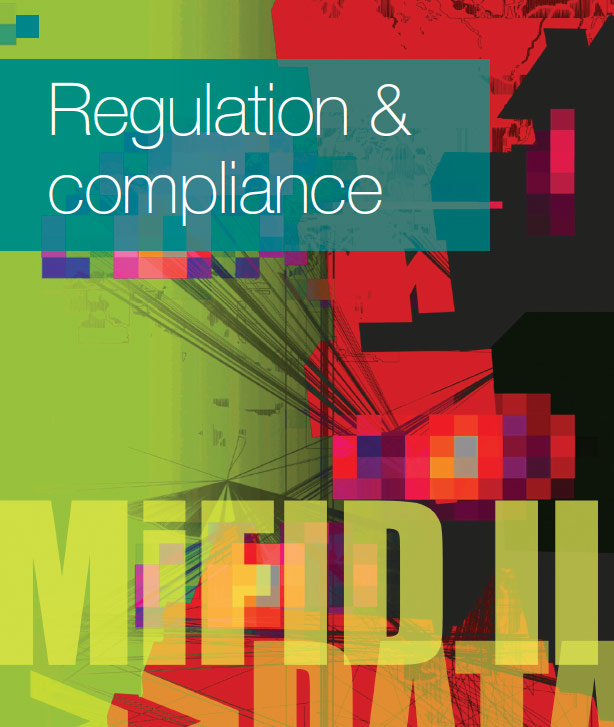 SO CLOSE YET SO FAR.

Although January 3 has passed, it is still unclear how many firms were MiFID ready. Gill Wadsworth reports.

As far as achievable deadlines go the MiFID II January 3 compliance date had always looked ambitious. In December, with just weeks to go, many buyside and sellside firms were yet to get systems, processes and policies in place.

While the Financial Conduct Authority (FCA) gave no indication of regulatory forbearance, the watchdog’s director of enforcement and market oversight, Mark Steward, said in September that the FCA will not take enforcement action where there is evidence that firms have taken “sufficient steps” to comply with MiFID II by the deadline.

However, even with a little more breathing room firms need to get their houses in order and comply with the regulations as soon as possible to avoid civil, regulatory or criminal consequences.

Born out of the regulatory gaps highlighted by the global financial crisis, MiFID II is designed to improve transparency and investor protection; improve competition; and align regulation of institutions doing business in the EU. Importantly the directive puts an end to asset managers taking research from anywhere – for free – and using it to inform investment decisions. Instead they will have to pay for research from approved providers.

It sounds straight forward, but as Mike Stepanovich, president of enterprise services at Visible Alpha, says this is a major change in the way the buyside has sourced and rewarded researchers. “An analyst or portfolio manager used to be able to open and read any email, they could use research from anywhere,” he adds. “After January 3rd how do they know which emails they can read and which they can’t?” 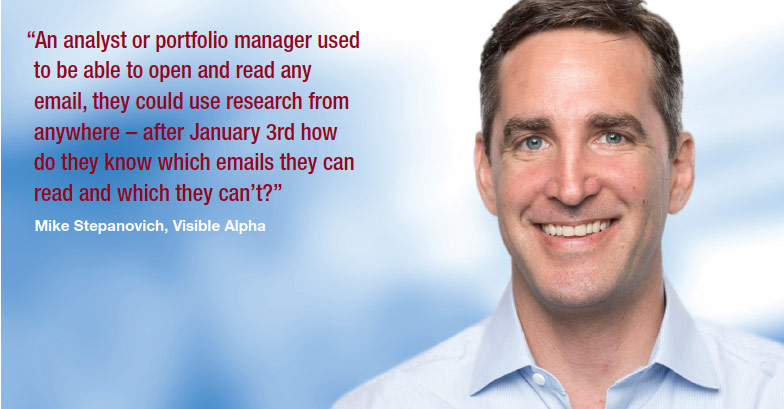 MiFID II means asset managers need to pare back their research providers and analyse which ones are worth doing business with in the future. This is a significant judgement call, and a survey by ONEaccess in association with Institutional Investor found that only just over half of asset managers expected to be able to assess research quality and value by the January 3, 2018 implementation date.

The problem many asset managers have is in being able to easily analyse and assess their research providers and then compare them with the competition. The survey found almost half of asset managers believe one of the most difficult aspects of research valuation is the lack of transparency from their counterparties as to the pricing for research.

Even where asset managers have got their preferred and approved research providers in place, there is no guarantee these relationships will work in practice, meaning the first half of 2018 could see serious chopping and changing of providers. 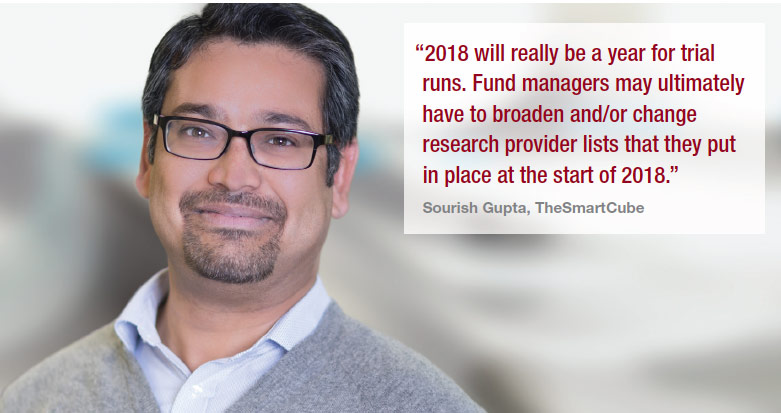 Sourish Gupta, director of business development for financial services at The Smart Cube, says: “2018 will really be a year for trial runs. It may not work out for some fund managers who rely on incoming research for idea generation and also prefer to compare views from a wide base of researchers. Fund managers may ultimately have to broaden and/or change research provider lists that they put in place at the start of 2018.” 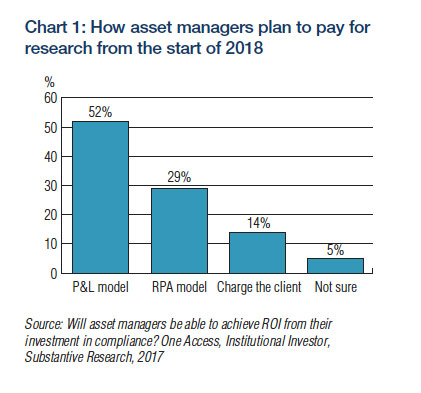 Perhaps more pressing than which researchers they will pay, is how asset managers will pay for it (see Figure 1). There are two main options available. First is to absorb the costs in the P&L, which is proving most popular with more than half (52%) of those surveyed by ONEaccess and has been chosen by State Street and Columbia Threadneedle Investments among others.

The second option is to use a research payment account (RPA) using commission sharing agreements, which passes the costs to investors and is the method of choice for 29% of asset managers including Fidelity Investments. Five per cent of asset managers are still unsure just how to pay for research which means they will need to spend the start of 2018 getting themselves ready. 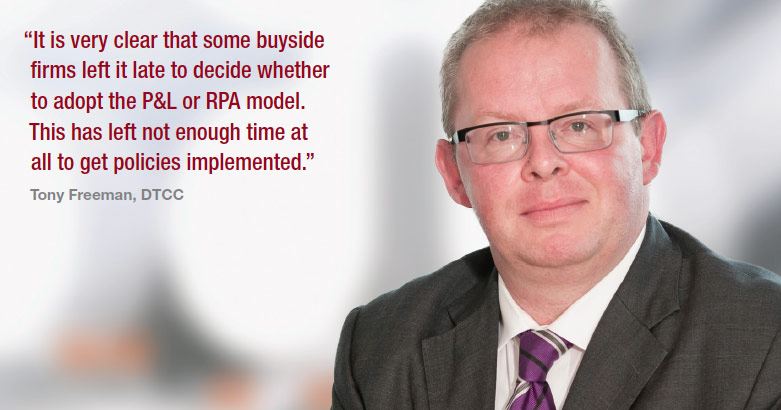 Tony Freeman, executive director for industry relations at DTCC, says: “It is very clear that some buyside firms left it late to decide whether to adopt the P&L or RPA model. This has left not enough time at all to get policies implemented.”

In some ways the sellside are beholden to the buyside, waiting until asset managers have policies in place before they can make moves of their own. While this is a hindrance for some, MiFID II has offered specialist providers the chance to make inroads into the market.

Freeman says high tech best execution brokers that offer pure execution and no research are very much looking forward to how MiFID II will change the market.

“[Pre-MiFID II] execution only brokers say trading has been directed towards investment bank integrated broker dealers that do investment and research. This is a whole new scenario and they believe they will prosper as they focus entirely on best execution without the conflicts of research,” he says.

At the same time, investment banks will also need to have firm plans in place for how they offer execution and research simultaneously. Freeman says investment banks are assembling Chinese walls where they intend on delivering best in class in both disciplines. Others, however, may choose to drop one in favour of focusing on the other.

While it is clear many firms are still not MiFID II compliant, even though the deadline has passed, there are those that are ahead of the game. It is here that the directive’s aim of improving competition will come to bear.

Those buyside firms that have identified the best value research suppliers and have systems in place to allow investment professionals to focus on the day job while still tracking and logging their processes, will have a competitive edge.

The sellside that offers streamlined services, understands its client’s requirements and is flexible enough to adapt as the regulations bed in, will be the one that comes out on top. As David Tattan, head of European business development at TORA, puts it, “Lots of MiFID II is about technological advances within these providers and getting operations in the right place not just to conform with regulations but to generate a competitive advantage.”

With so much still to learn from the implementation of MiFID II it seems rather premature to consider a third incarnation of the regulation, yet some already see the possibility of a MiFID III. Like a bad movie franchise that will not die, the directive will keep reappearing.

Ylitalo says, “MiFID III is already being drafted. All European regulation contains a legal review clause; MiFID III is not a matter of if, but when.”

However, other commentators are less certain there will be a wholesale revision of MiFID II, rather that the existing directive will be tweaked and amended as unintended consequences emerge.

Ravi Jain, manager, business consulting at Sapient Global Markets, says “While regulators will keep tweaking requirements to make it easier for firms and merging different regulations like EMIR and MiFIR, an overhaul in the form of MiFID III is improbable in the near future.”