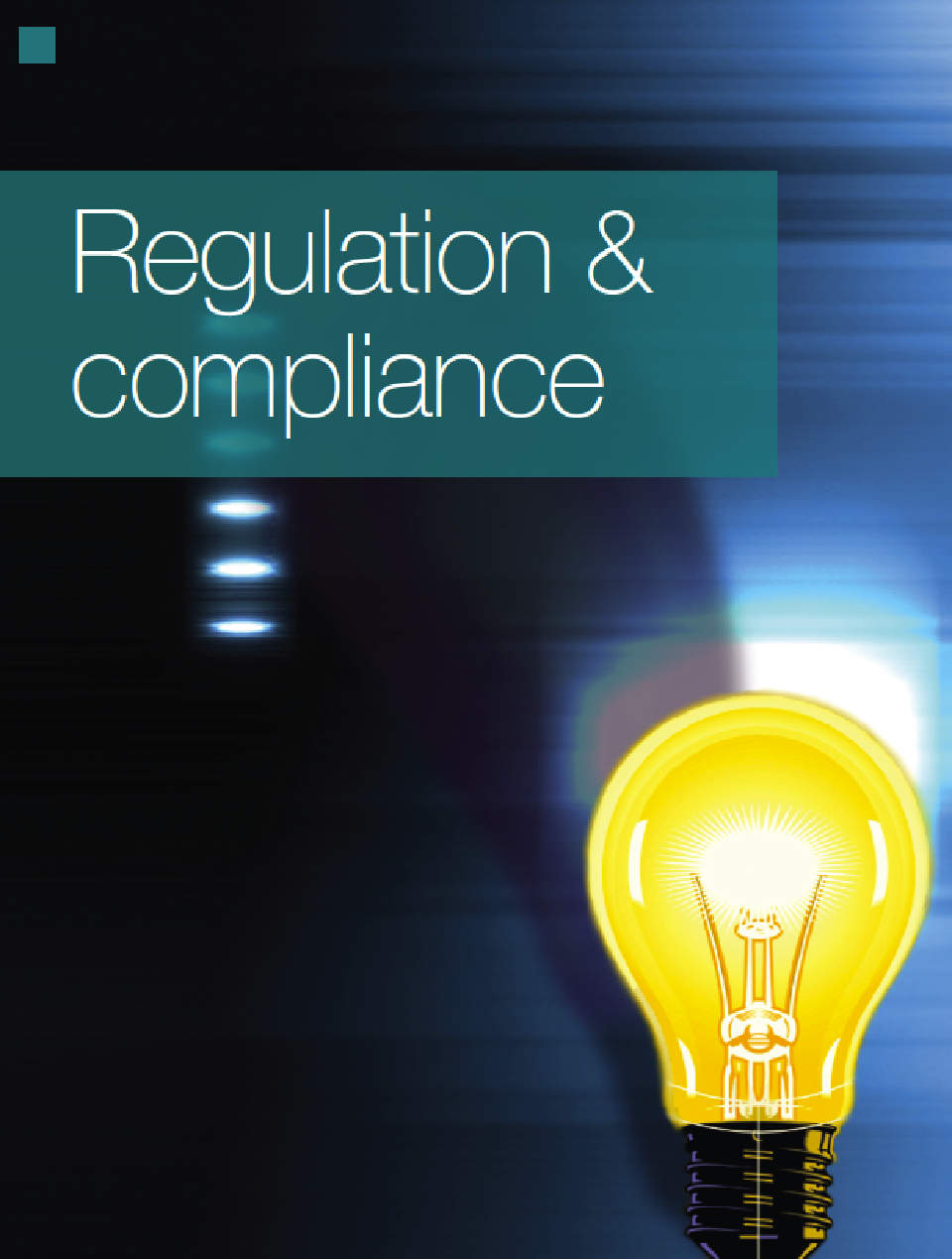 MOVING FROM THE DARK SIDE.

Gill Wadsworth looks at how the industry is adapting to a brighter post MiFID II world.

If ever there was an ominous sounding financial activity it is dark pool trading. It conjures images of shadowy figures executing sinister trades far off radar, like the dark web only with equities rather than drugs and guns.

The reality is dark pools sound far more exciting than they are. They are simply a means of trading away from the main exchanges, generally involving large deals which might otherwise upset the markets. Or that was the intention anyway.

Unfortunately, some of the activity on dark pools has proven rather unsavoury and, in some cases, downright illegal. Barclays and Credit Suisse were handed fines in 2016 for the way they used dark trading, while the activity of high frequency traders has also called these markets into question.

The regulators simply could not allow such untoward activity to continue, especially following the global financial crisis, leading them to implement sweeping change. Enter MiFID II, which was designed to restrict the use of dark pools by imposing double volume caps (DVCS), which limit the amount that can be traded in this way. Thanks to a lack of data on the right limits to impose, DVCs did not come into force until a full three months after MiFID II’s implementation date in January 2018.

However now they are in place, the effects are noticeable. Stephen Maijoor, European Securities and Markets Authority (ESMA) chair, said in June: “After a short delay, the double volume cap system has been up-and-running and has resulted – to date – in the suspension of dark trading of more than 900 instruments. As a result, the number and volume of transactions in dark pools has significantly decreased.”

Coinciding with the decrease in dark pool activity there has been almost no increase in trading in lit markets. Data from Rosenblatt Securities reveals that exchanges and some other lit trading venues have just seen market share increase to 50.85% this year from 50.28% last year. So, what is happening? Since the whole reason for having dark pools in the first place was to allow large trades to take place without disrupting the market, the regulators did not wish to disadvantage institutional investors who would most likely be making such significant moves. Consequently, large trades are exempt from DVCs. In the months since the caps came into force, the number of large dark pool trades has increased noticeably.

Research from Thomson Reuters Datastream/Fidessa shows that the average dark trade size effectively doubled over the five months to May 2018. Christian Voigt, senior regulatory adviser at Fidessa, suggests some buyside traders are, rather perversely, moving from the lit markets into the dark pools. Rather than splitting up a large trade and feeding it gradually into a transparent exchange, they prefer to keep the large trade and use a non-transparent venue.

“Most of the buyside, if they want to buy and sell, do so in large sizes. Before DVCs when a broker received an order they might slice and dice it into smaller chunks and feed it into the market. If they do that, they can’t put it into a dark pool. So now they put the whole trade into a dark pool.”

The fact remains, however, that trading is moving away from dark pools but rather than moving truly into the light, trades are being conducted in the shadows.

The alternative venues in question are periodic auctions which Maijoor says have seen trading volumes triple since DVCs were introduced in March. At the same time systematic internalisers (SIs) have also, according to Maijoor ‘enjoyed a significant increase in market share under MiFID II’.

While there is no direct accusation of wrongdoing, ESMA’s Maijoor says that ESMA will investigate in case traders are trying to “circumvent the double volume cap”. The issue here is the rules under which trading occurs in a periodic auction or SI. The alternative trading volumes are not bound by the same restrictive rules as lit exchanges; for example a lit market has a minimum tick size while a periodic auction or SI is able to operate to points of half that tick size.

Alasdair Haynes, founder of Aquis, which runs a transparent exchange, says, “The beneficiaries of DVC have not been the lit books but the periodic auctions and the SIs. These venues can offer a better price than a lit exchange; from a best execution point of view they make sense. So the question is whether that offers a competitive advantage? The answer is undoubtedly yes.”

Fortunately for Haynes, ESMA shares these concerns about the lack of a level playing field and proposes an amendment to MiFID II RTS 1 clause which deals with the transparency provisions for equity instruments ‘to ensure that quotes of SIs meet the tick size requirements’. The draft amendment is with the Commission for endorsement. 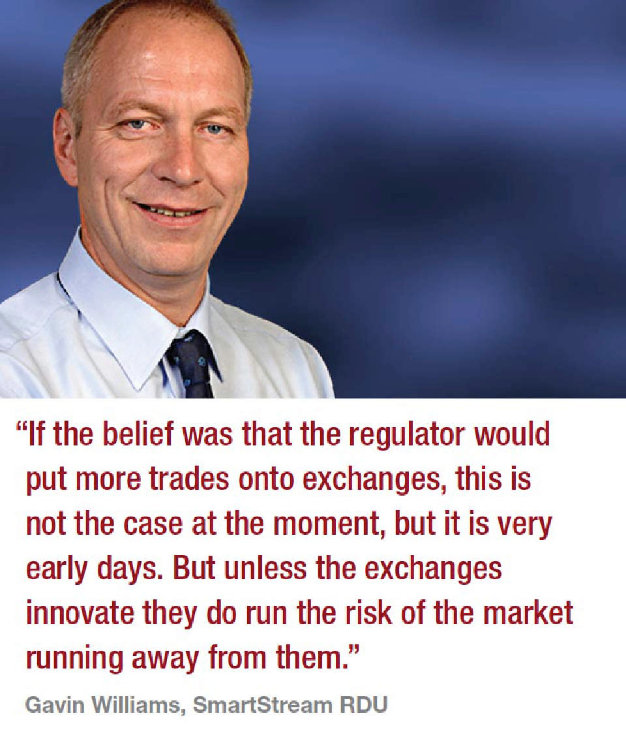 In the meantime, it is up to trading venues to prove their worth. Gavin Williamson, business consultant at the SmartStream Reference Data Utility says: “If the belief was that the regulator would put more trades onto exchanges, this is not the case at the moment, but it is very early days. Unless the exchanges innovate they do run the risk of the market running away from them.”

Haynes says Aquis has risen to this challenge. In a bid to eliminate poor trading practise and to make trading more cost effective, Aquis charges a subscription fee to traders and has also imposed rules banning high frequency traders who have engaged in behaviour that forces pricing disruption. “The fact is asset managers can trade in large volumes on a lit exchange at a fair price. We have transparency and clarity on a lit venue,” he says.

Aquis has attracted a sizable volume of business; in June 2018 the exchange traded 1,527bn shares worth Ä20,706bn.

Whether other exchanges can emulate this model remains to be seen. The pressure might be on lit exchanges to up their game, but Voigt says SIs and periodic auctions will need to innovate too, especially as competition for business intensifies. “I would expect competition in the market to provide liquidity, and that is a good thing. Competition brings innovation and everyone will benefit in the end so this is a positive story,” Voigt says.

However, venues feeling the greatest pressure are the dark pools. ITG saw trading volumes fall by 4% in dollar terms in June compared to Q1 2018. If they are to stem the flow, they too will have to innovate.

Duncan Higgins, managing director and head of electronic sales at ITG, says the broker is focused on using fintech to create sophisticated algorithms that improve best execution. “We have a new algorithm which uses artificial intelligence techniques which can process data and learn how to make the optimal decision without needing human instruction,” he adds.

MiFID II has shaken up the way in which trades are executed but whether regulators can really claim it has improved transparency is in doubt. The rules need time to bed in, current venues need to fall in line, playing fields must be levelled and ultimately everyone needs to operate within the spirit of the law.

The industry is moving in the right direction, but the pace is far from rapid.