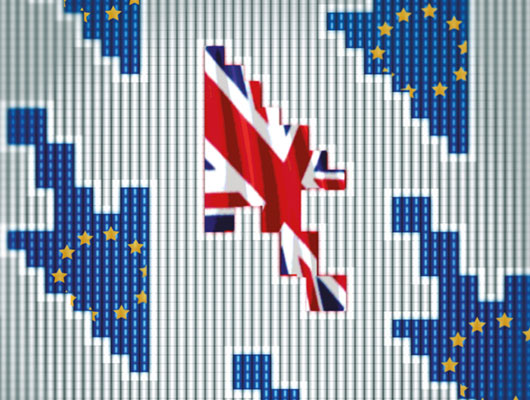 Doing our own thing

Louise Rowland looks at regulatory divergence in a post-Brexit world.

It was the longest – at times, most acrimonious – divorce in history. Five months after the UK left the European Union and assumed ‘third country’ status, what’s next for financial services regulation? A fisticuffs? A free for all? Or a slow, falling in step where it matters?

The early pointers weren’t promising. The UK-EU Free Trade agreement, when it finally arrived in December, made no provision for financial services, despite the lengthy negotiations since 2016. That meant the loss of passporting and with it, UK firms’ ability to serve EU markets from a UK base without dealing with new regulatory requirements.

Would equivalence then be on the table, allowing UK firms EU market access, even if at the discretion of the European Commission? In the currently somewhat cool relationship between the UK and the EU, that too now looks unlikely.

Stay close or strike out?
The Memorandum of Understanding agreed in March – creating a ‘framework for voluntary regulatory co-operation’ and a forum ‘to serve as a platform to facilitate dialogue on financial services’ – could be a positive development. But many see the MoU as weak at best; at worst ‘as useful as a chocolate teapot’.

Meanwhile, the UK Government is set on its avowed course of increased sovereignty, while the EU is in no hurry to offer a helping hand to an offshore competitor, often citing its own nations’ ‘strategic autonomy’.

“While the MoU is a step in the right direction, it is not an agreement on equivalence, and there are now concerns in some corners that tussles we’ve seen playing out in other industries, like fishing, could now materialise in financial services,” says Jason Waight, Head of Regulatory Affairs, EMEA and APAC at MarketAxess. “While we all hope this doesn’t happen, disagreement across a range of issues like competition, passporting, and fair and easy access to capital markets, will create uncertainty for market participants on both sides of the Channel.”

Rezwan Shafique, head of UK consulting at Delta Capita, is sanguine about the situation. “The UK regulators have always been progressive in how we want to regulate the financial markets versus the EU. Banks have a proven track record of tackling regulatory challenges thrown at them. There’s a fair bit of quiet confidence out there. The industry is good at adapting to regulations, particularly demonstrated over the past 10 to 15 years.” 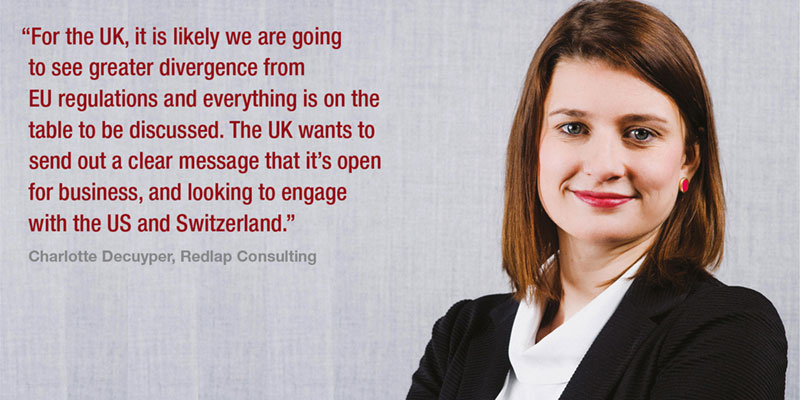 Nevertheless, the next few months are likely to be highly political, suggests Charlotte Decuyper, consultant at Redlap Consulting. “For the UK, it is likely we are going to see greater divergence from EU regulations, and everything is on the table to be discussed. The UK wants to send out a clear message that it’s open for business and looking to engage with the US and Switzerland. There’s a willingness to streamline and optimise regulations in place, but also take a broader look at all the different EU regulations onboarded to see what can be consolidated.”

Opting for a different course
As the EU builds its post-Brexit infrastructure, some temporary regulatory arrangements remain in place. These include a Temporary Permissions Regime in London for some EU-based firms, and euro-denominated instruments being allowed to be cleared in London until 2022.

In other areas, however, we’re already seeing divergence in a bid to enhance the competitiveness of the City, in the face of intensified competition from Amsterdam and other EU hubs. The UK has decided not to implement the Settlement Discipline Regime in CSDR, and the Financial Conduct Authority is considering tweaking the rules surrounding equity, fixed income and commodities. 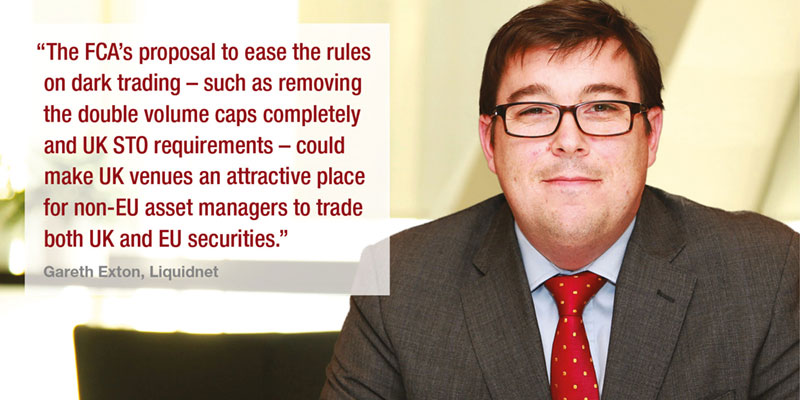 The proposed easing of curbs on trading in dark pools in the UK is particularly striking. Gareth Exton, head of EMEA execution and quantitative services distribution at Liquidnet observes: “The FCA’s proposal to ease the rules on dark trading – such as removing the double volume caps completely and UK STO requirements – could make UK venues an attractive place for non-EU asset managers to trade both UK and EU securities. This would however require exchanges and brokers to establish the appropriate routing rules.”

At the same time, he points out, EU regulators appear to be considering further constraints on dark trading via changes, for example, to the reference price waiver. “The growing prospect of regulatory divergence could make EU asset managers nervous to the potential of being disadvantaged in the search for valuable liquidity.”

Lord Hill of Oareford, the former EU financial services commissioner, also delivered a series of new listings recommendations in Budget week in early March, aimed at boosting London’s capital market and strengthening its global competitiveness. These include introducing ‘dual-class’ shares to give company founders some control over their shares once listed – to appeal to fast-growing tech companies looking to raise equity capital – as well as reducing free float requirements and enhancing the attractiveness of the City as a market for listing special purpose acquisition companies (SPACs).

Additional proposed changes include scrapping MiFID II research rules on small caps and best execution reporting. These are currently the subject of an FCA consultation paper on reforms to capital markets, looking at changes to the UK’s regulatory regime to ensure it is adapted to the structures of UK markets.

Agree to disagree?
Conjecture about London becoming Singapore-on-Thames or overseeing a bonfire of regulations may be inaccurate, but the UK will undoubtedly be searching for a sweet spot between the EU’s stricter central, command & control framework and the self-regulatory approach of the US.

Might that mean tit-for-tat retaliations in a high stakes game of 3-D regulatory chess? If EU asset managers find themselves disadvantaged in terms of liquidity, could the EU retaliate by tightening the screws on delegation rules? Is Fortress Europe even a risk?

Many believe that both sides have too much to lose for intense adversarial engagement. One observer points out that the EU’s recent quick fixes to the MiFID II regulations, in response to the UK’s move on dark pools, is a promising sign that pragmatism will prevail.

Regulating the future
Innovation, as ever, will be the key to unlocking new market opportunities for UK firms. Enlightened regulation is a key part of that, says Shafique. “I’d like to see the FCA and PRA focus on innovation, making it easier for UK companies to service the future of financial services,” he says. “It’s less about tweaking existing rules and more about making business easier for new entrants, wealth mangers, hedge funds and the sellside globally.”

More regulatory attention should also be paid to outsourcing, as a major growth area driven by technology, he adds, and to the proliferation of external platforms. “There’s an opportunity to consolidate platforms, driving simplicity and efficiency for the market. Regulators could initiate studies to think progressively about what financial services needs and react appropriately to that.” 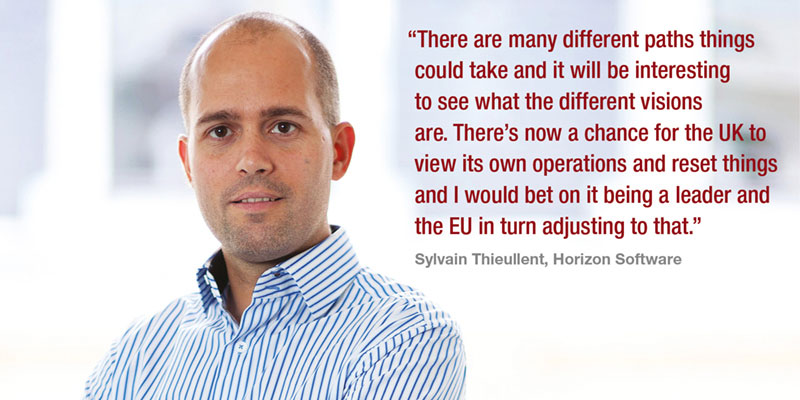 Things may remain uncertain on the regulatory front for some time to come. However, Sylvain Thieullent CEO of Horizon Software is bullish about the opportunity for a reset. “There are many different paths things could take and it will be interesting to see what the different visions are. There’s now a chance for the UK to view its own operations and reset things, and I would bet on it being a leader and the EU in turn adjusting to that. That’s very interesting compared to what we’ve had. The UK is driving a much faster car than the EU and its vision for the next 10 to 15 years is key.”