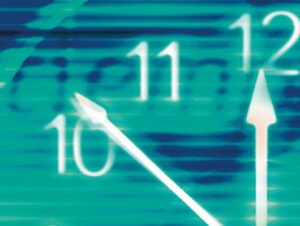 The 31 December 2021 deadline for the Libor transition is near but there are still many moving parts to consider. Lynn Strongin Dodds reports.

The clock is definitely ticking but banks in the UK and Japan heaved a sigh of relief when in September regulators gave the green light to publishing an artificial or synthetic Libor or London Interbank Offered Rate number through 2022. This means that firms in the sterling and yen markets will be allowed to continue using that rate in all legacy contracts except cleared derivatives. However, despite the reprieve, institutions should not take their eye off the transition ball.

The move was unexpected but definitely welcome. Most contracts using one of the 35 permutations of Libor are being switched to risk-free rates or RFRs compiled by central banks, such as the secured overnight financing rate (Sofr) from the US Federal Reserve and the sterling overnight index average (Sonia) at the Bank of England by year end.

In the UK, Libor rates are currently published by ICE Benchmark Administration (IBA) and it will continue to publish one-, three- and six-month sterling and yen Libor rates in synthetic form from Jan. 4 2022. 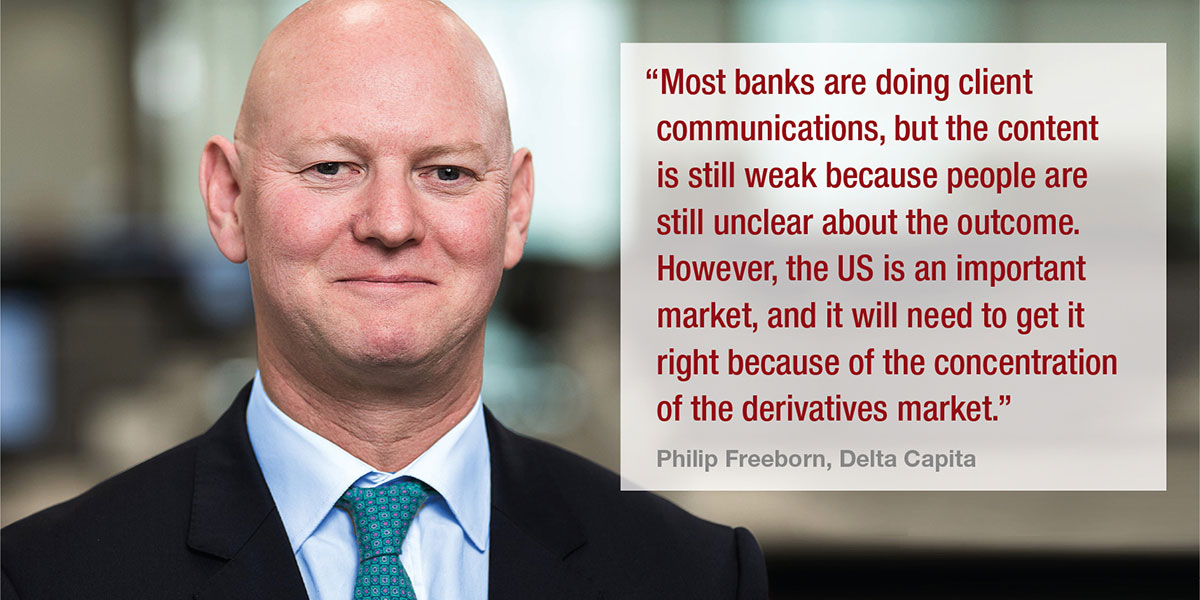 The GBP synthetic rate could be used for contracts without a pre-cessation trigger, according to Delta Capita COO Philip Freeborn. “The synthetic rate is IBA Sonia term rate + fixed spread,” he adds. “The key challenge there is that the credit part of the rate is not changing dynamically, and the actual spread is likely to diverge from the fixed level over time.”

“The publication of a ‘synthetic’ rate for some sterling and Japanese yen Libor settings for a limited period will give market participants a bit more time to complete transition of legacy contracts,” Edwin Schooling Latter, the FCA’s director of markets and wholesale policy, said in a statement. “We encourage firms to use that time well.”

Earlier in the year, the US released its own pressure valve by extending key dollar Libor tenors for 18 months until mid-2023. The Federal Reserve previously told firms to stop using dollar Libor in new contracts by year end. The FCA said that it could allow limited use beyond then for circumstances including market making and hedging.

Change is not easy

One of the issues in the transition saga, is that Libor is deeply ingrained in financial markets and there were still many market participants that were not going to make the deadline which would have caused disruption in the markets. A slew of scandals during and after the 2008 financial crisis spelled its demise but it has been a key benchmark for setting the interest rates charged on adjustable-rate loans and a variety of mortgages for over 40 years.

Libor also played a big role in pricing debt issued by corporate borrowers. Around $230tn of derivatives were tied to the US dollar benchmark alone and most major global banks are estimated to be spending over $100m this year preparing for the switch. 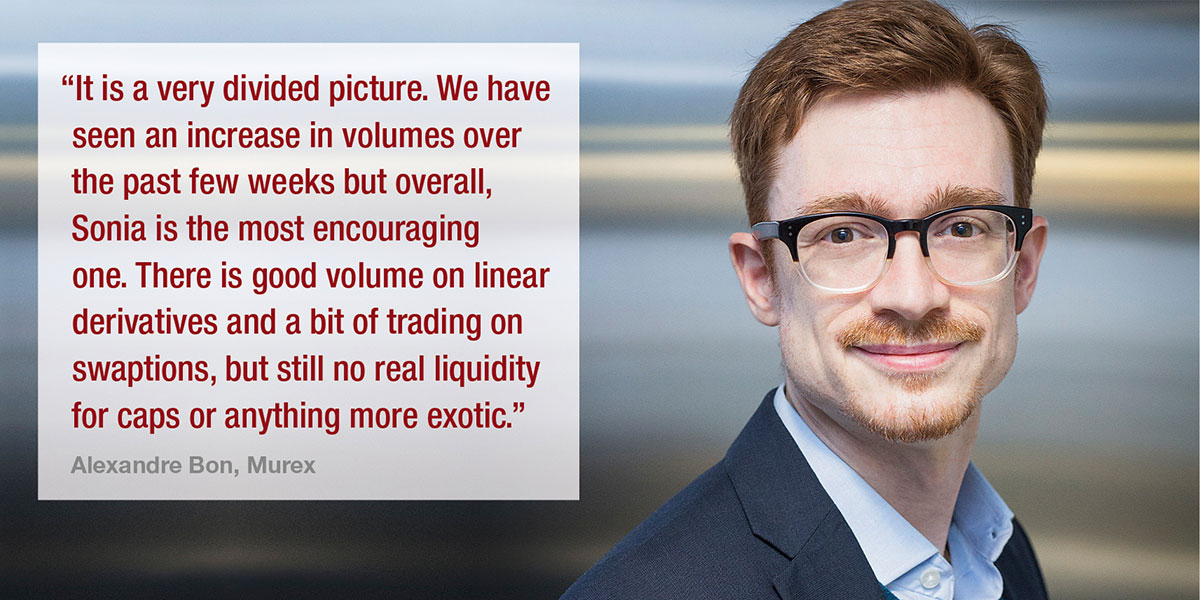 “Countries are moving at different paces in adopting the replacements. “It is a very divided picture,” says Alexandre Bon, group co-head of Libor and benchmark reform at Murex. “We have seen an increase in volumes over the past few weeks but overall, Sonia is the most encouraging one. There is good volume on linear derivatives and a bit of trading on swaptions, but still no real liquidity for caps or anything more exotic. Volatility inputs are still often derived from more liquid Libor option prices, but we are hoping to improvements in the coming months.”

It is perhaps not surprising that the UK is farther ahead in its preparations. As Freeborn put it, “Many organisations perceived Libor as a UK problem and the regulators have driven the change and have been more prescriptive than in the US.” 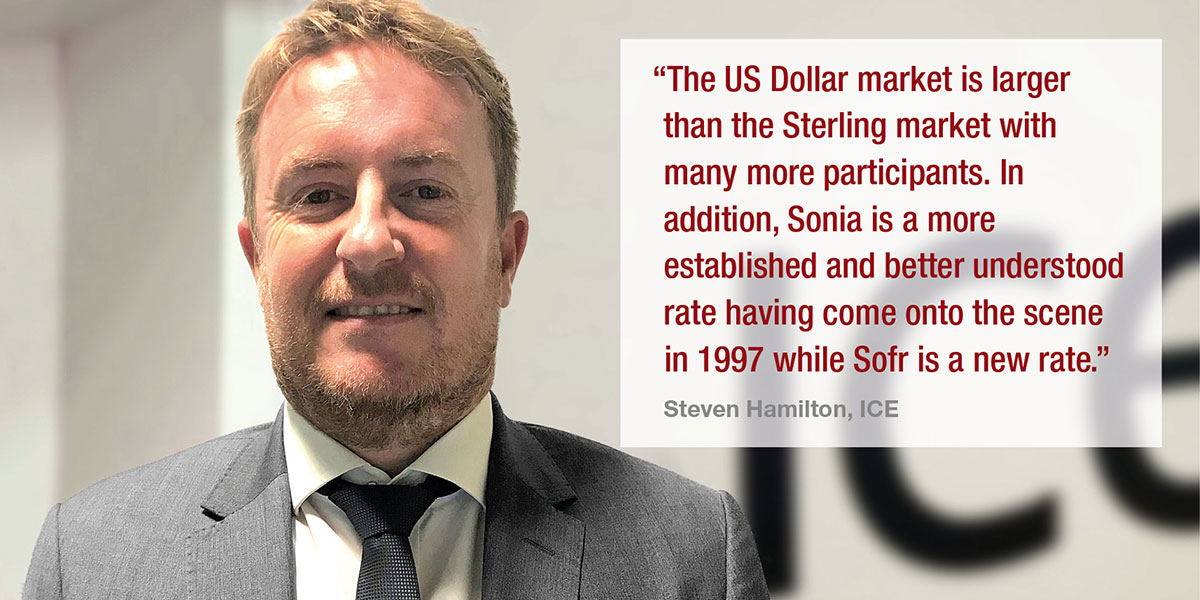 Steven Hamilton, global head of financial derivatives, ICE, agrees adding “The US Dollar market is larger than the Sterling market with many more participants. In addition, Sonia is a more established and better understood rate having come onto the scene in 1997 while Sofr is a new rate.”

Given the progress, Hamilton notes that the conversations in the UK have moved from the transition to operational. “We have been working with clients to ensure that they understand the process for their listed derivatives referencing Libor to migrate to the RFR products, and that clearing members are ready for that migration. The clear message to ICE from our clients was to follow the same process that is outlined in the ISDA fallbacks.”

The International Swaps and Derivatives Association provided a safety net of robust fallbacks via the ISDA Ibor Fallbacks Supplement and associated Protocol. For example, the fallbacks for the Sterling Libor ICE Swap Rate will be based on the IBA’s GBP Sonia ICE Swap Rate, plus the applicable ISDA spread adjustment published by Bloomberg and adjustments to account for structural differences between the two swap rates.

ISDA’s fallback rate for US dollar Libor will be adjusted to Sofr plus a spread adjustment. Based on the results of ISDA’s recent consultations, in the amended 2006 Definitions Sofr will be based on the compounded setting in arrears rate with a five-year historical median approach for the spread.

However, many market participants are not that enthusiastic about Sofr. Although it was officially endorsed by the US Alternative Reference Rates Committee (ARRC), the message from regulators is somewhat confusing. Bank watchdogs have expressed an openness to non-Sofr rates in their communications to banks. In fact, in recent remarks, Federal Reserve Vice Chair for Supervision Randal Quarles said A bank can choose any rate that it “determines to be appropriate for its funding model and customer needs” as long as it does the extra work needed to satisfy regulators on their decision-making.

He added, “If market participants do use a rate other than Sofr, hey should ensure that they understand how their chosen reference rate is constructed, that they are aware of any fragilities associated with that rate, and – most importantly – that they use strong fallback provisions.” 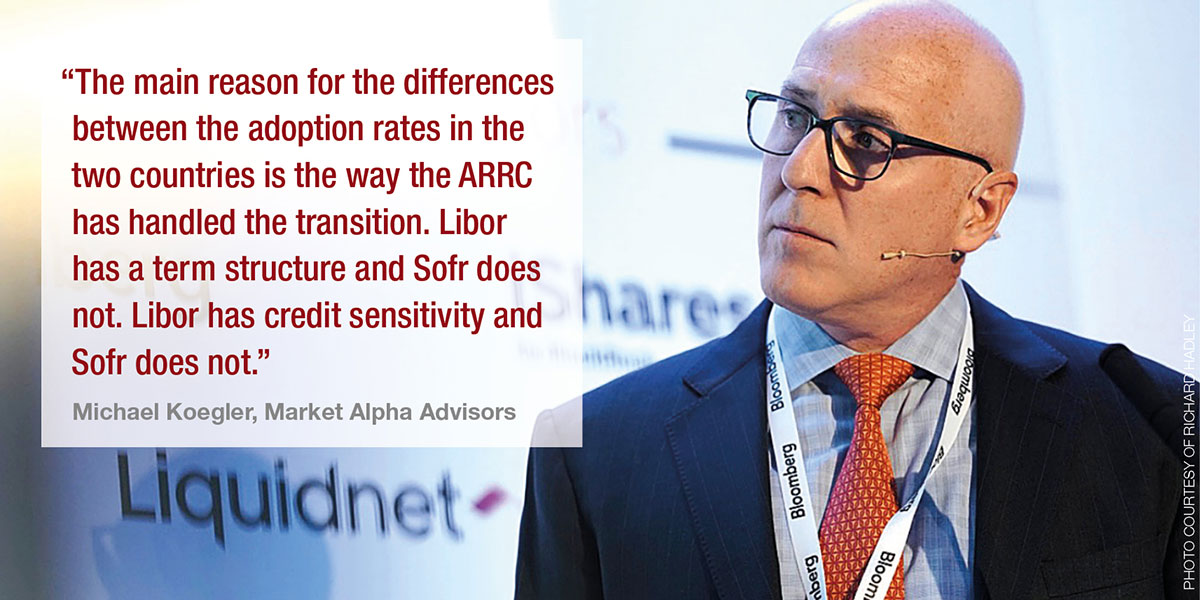 As Michael Koegler, managing principal, Market Alpha Advisors notes, “The main reason for the differences between the adoption rates in the two countries is the way the ARRC has handled the transition. Libor has a term structure and Sofr does not. Libor has credit sensitivity and Sofr does not. Using overnight Sofr in certain instruments has proven to be challenging for many market participants. They would prefer to use a benchmark like Ameribor that has both a term structure and credit sensitivity. The regulators in the US did not mandate the use of overnight Sofr so many market participants have kicked the can down the road. This is why adoption has been slow. There was a clearer mandate in the UK.”

The other popular alternative rate is the Bloomberg Short Term Bank Yield Index which is also credit sensitive and has a term component, which gives lender and borrower certainty about what their payment will be ahead of time. By contrast Sofr is backward-looking with the borrower not knowing exactly what they owe until the end of the loan. 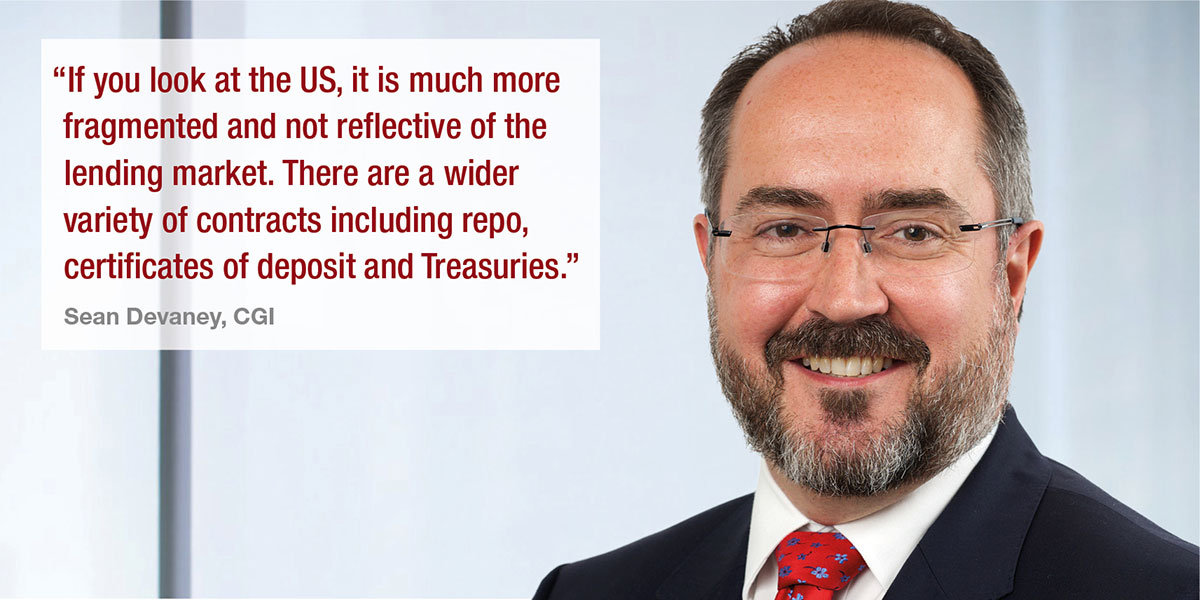 “I see an increase in alternatives because although Libor made it simple in many ways, it was not always the best rate or reflective of the overall market,” says Sean Devaney, director of strategy for banking and financial markets at CGI. “If you look at the US, it is much more fragmented and not reflective of the lending market. There are a wider variety of contracts including repo, certificates of deposit and Treasuries.”

Liquidity will be the key determinant, according to Freeborn. “There is greater uncertainty in the US at the moment over RFRs, but I think there will be at least two going forward,” he says. “Most banks are doing client communications, but the content is still weak because people are still unclear about the outcome. However, the US is an important market, and it will need to get it right because of the concentration of the derivatives market.”

A race to the Libor finish

With the Libor transition just over a week away, exchanges such as LCH and Intercontinental Exc ...

Heather McKenzie looks at why so many fintechs and banks are ready to walk down the technology ...

The Intercontinental Exchange (ICE) is expanding its environmental, social and governance (ESG) ...