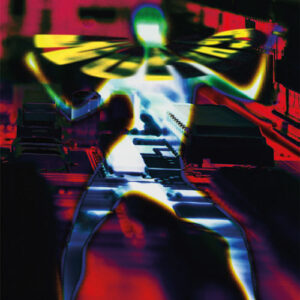 Although diversity and inclusion are high on the financial services agenda, the focus has tended to be on gender. Studies show that people from ethnic minority backgrounds are still not given the same opportunities to climb the proverbial ladder. There are several initiatives on the table, but all agree it’s time to turn words into action.

As Julia Streets, founder and CEO, Streets Consulting and host of the DiverCity Podcast series, puts it, “From our podcasts as well as the conversations I have been having it appears that the journey is much slower than people expected and patience with the pace of change is diminishing.”

There had been hope that the Black Lives Matter movement, revived by the death of George Floyd by police two years ago, would have led to more meaningful change. It did open several dialogues leading to the implementation of bias training and increase in employee resource groups (ERGs), voluntary, employee-led groups whose aim is to foster a diverse, inclusive workplace aligned with the organisations they work in. 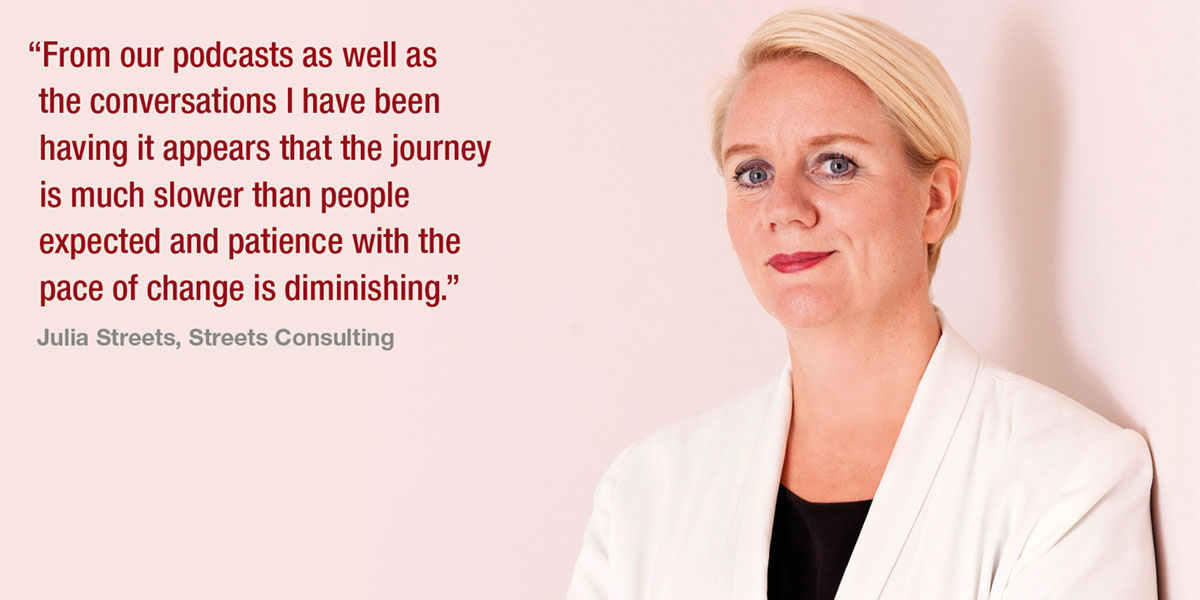 However, the momentum seems to have fizzled somewhat. “Sending out a statement, as many business leaders did following the murder of George Floyd in the US, simply isn’t enough,” says Lindsay Jones, chief people officer at Delta Capita. “What comes next and how will that change be transformational? ERGs are usually run by under-represented demographics and the participants mostly fall into these groups too.”

She notes that DEI (diversity, equity and inclusion) groups are also often run in an employee’s own time or on top of their current workload, whereas participation should be funded/ officially part of your role. Often ERG representatives have to build business cases and present them to more senior groups in order to make changes.

“Instead, the change should be driven and on the lips of the most senior leaders of the businesses. DEI is not enough of a priority topic and is often deprioritised for more ‘pressing matters,’ she adds.

This may help explain the findings of the recent report – Race to Equality – by reboot, a network of professionals from City of London’s major firms including managers from Legal & General and State Street. The report, which canvassed 800 employees from 440 companies, with more than a collective £1.4tn in annual revenue found the industry fell short. Despite the rhetoric, financial service workers from ethnic minority backgrounds remain sceptical that their organisations are committed to diversity and inclusion.

The study revealed that around 66% of the ethnic minority respondents said they suffer discrimination of some kind in their job while nearly half reported that their career progression was slower than that of their white peers. In addition, only 36% believed their organisations were ‘fully committed’ to diversity and inclusion, while just half thought their senior leadership believed diversity was critical to the future of their organisation. 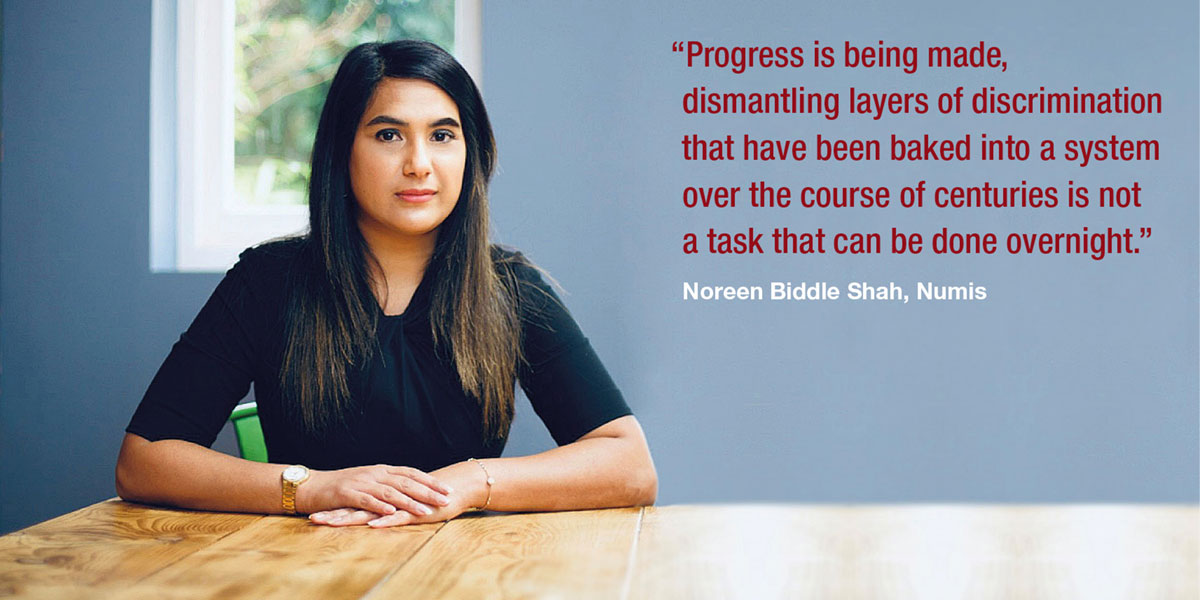 “Race discrimination remains a significant issue in the UK workplace – across all sectors, not just financial services,” says Noreen Biddle Shah, founder of reboot, and head of marketing and communications at Numis. “But the UK’s financial services industry – the country’s biggest export – has long held a reputation as something of an exclusive club.”

She notes that “employees in this sector earn 29% more than the rest of the UK on average – and that is before bonuses. With so few role models in senior positions and challenging workplace cultures, it is difficult for those from different backgrounds to break into the industry. Whilst many want this to change, not everyone knows how to confront these issues – let alone solve them. The challenge ahead of us cannot be underestimated.”

There are of course no easy fixes because as Biddle Shah notes that although “Progress is being made, dismantling layers of discrimination that have been baked into a system over the course of centuries is not a task that can be done overnight.”

Time for a concrete plan

Reboot has proposed a five-point plan for businesses looking to support their ethnic minority employees and provide a more inclusive workplace environment. The first step is to listen to employees. Only a quarter of firms consult with ethnic minority employees on how to tackle D&I issues. With a clear lack of diversity at senior levels across the industry, this means decisions are often made by those with limited experience of the challenges minority groups face, according to Biddle Shah.

The framework also includes updating and evolving training programmes, developing role models through senior business sponsors and setting the tone at the top. “Senior leadership need to better articulate the benefits and importance of a diverse workforce to their broader staff base, while providing authentic support to ethnic minority employees,” she adds.

Streets also believes there needs to be a cultural shift in an organisation if they want to attract ethnic minority talent. “If a company does not have great representation, then how can it reflect openness aside from marketing,” she adds. “There also needs to be enterprising leadership to drive change as well as role models and allies.” 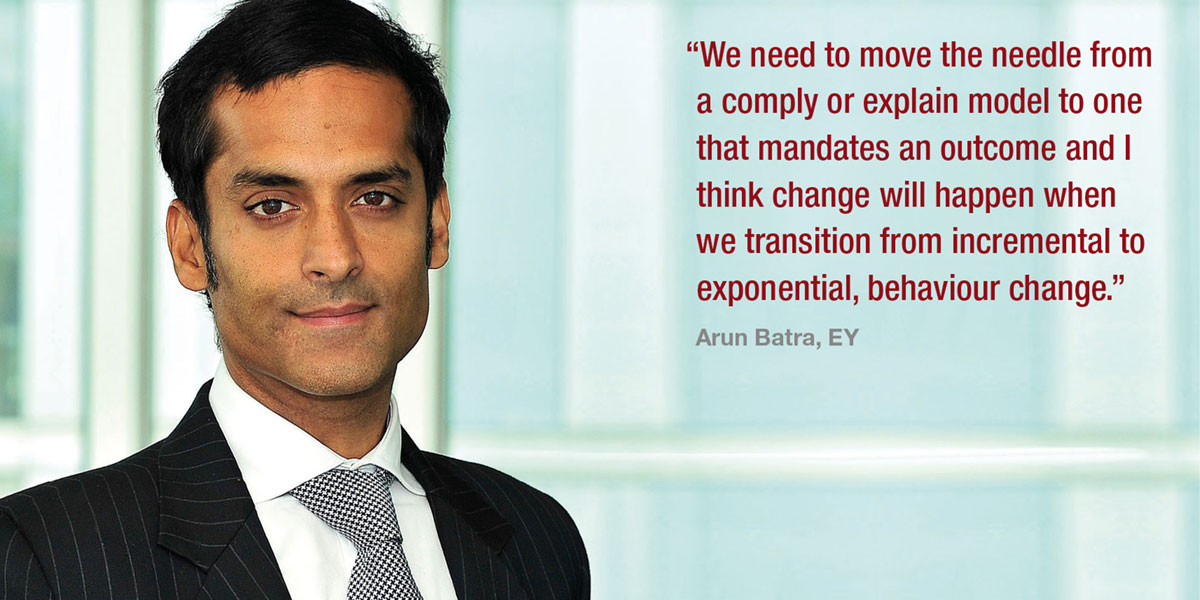 There are also calls for greater regulation. “We need to move the needle from a comply or explain model to one that mandates an outcome and I think change will happen when we transition from incremental to exponential, behaviour change,” says Arun Batra, founder of the National Equality Standard and EY UK Partner. “It is important we focus both on culture change and on ensuring companies take their regulatory obligations seriously and report progress in their annual reports.

He believes that regulation can play a role and points to the Financial Reporting Council’s Review of Corporate Governance, as well as the recent Financial Conduct Authority (FCA), Prudential Regulation Authority (PRA) and Bank of England (BoE) survey looking into to how they can improve diversity and inclusion in the financial services sector.

“As the FRC review shows we have some way to go, but the trend is in the right direction,” he adds. “Companies need to realise that this is no longer just about doing the right thing, but instead recognise the importance of complying with the D&I agenda, as failure to do so could ultimately lead to a potential financial risk to their business in a whole host of ways,” he says.

Alexandra Foster, director, of insurance, wealth management and financial services at BT, also believes there needs to be greater accountability and transparency. She thinks that the Race to Work Charter could have the same significant impact that the Women in Finance Charter as well as the 30% Club has done in promoting and supporting women. 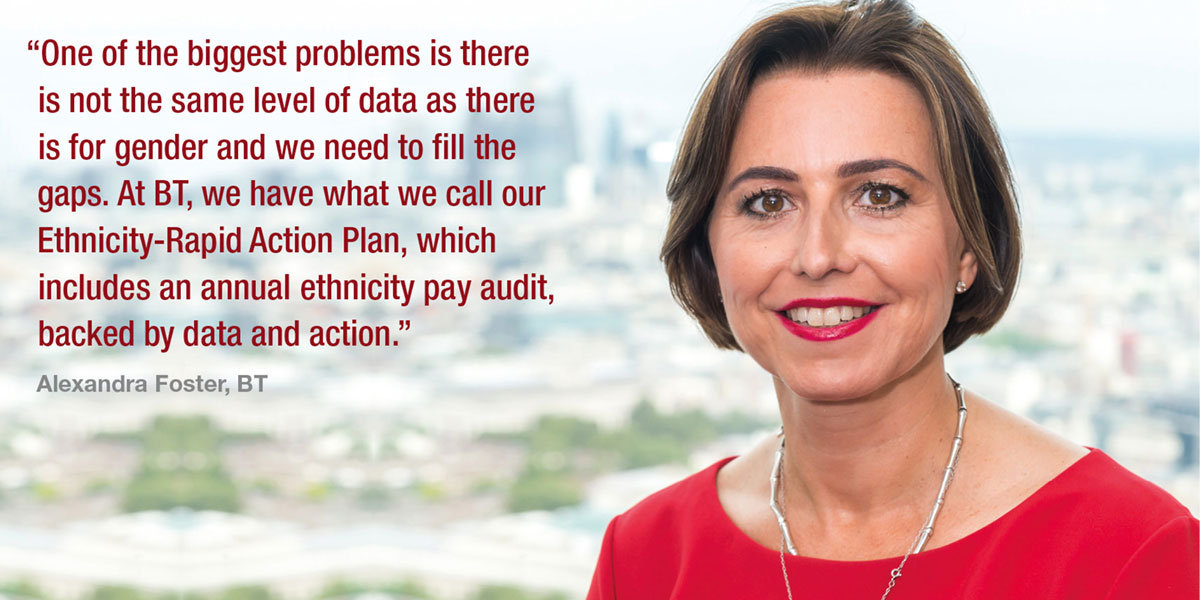 “One of the biggest problems is there is not the same level of data as there is for gender and we need to fill the gaps,” she says. “At BT, we have what we call our Ethnicity-Rapid Action Plan, which includes an annual ethnicity pay audit, backed by data and action. We created a new ethnicity dashboard that helps us track progress across the organisation. We also have an education programme that includes reverse mentoring whereby a person from the ethnic background will mentor a member of the senior management team.”

Anita Karppi, founder, The Buy-side Trading Community, agrees that the studies and consultations by the regulators such as the Parker Review and the recent consultation by the FCA – DP 21/2 on Diversity and Inclusion in the financial sector – are welcome but will not resolve all issues by itself. “There needs to be more action programmes from firms to attract more talent from various schools, colleges and universities away from the top tier/ivy league schools,” she adds. 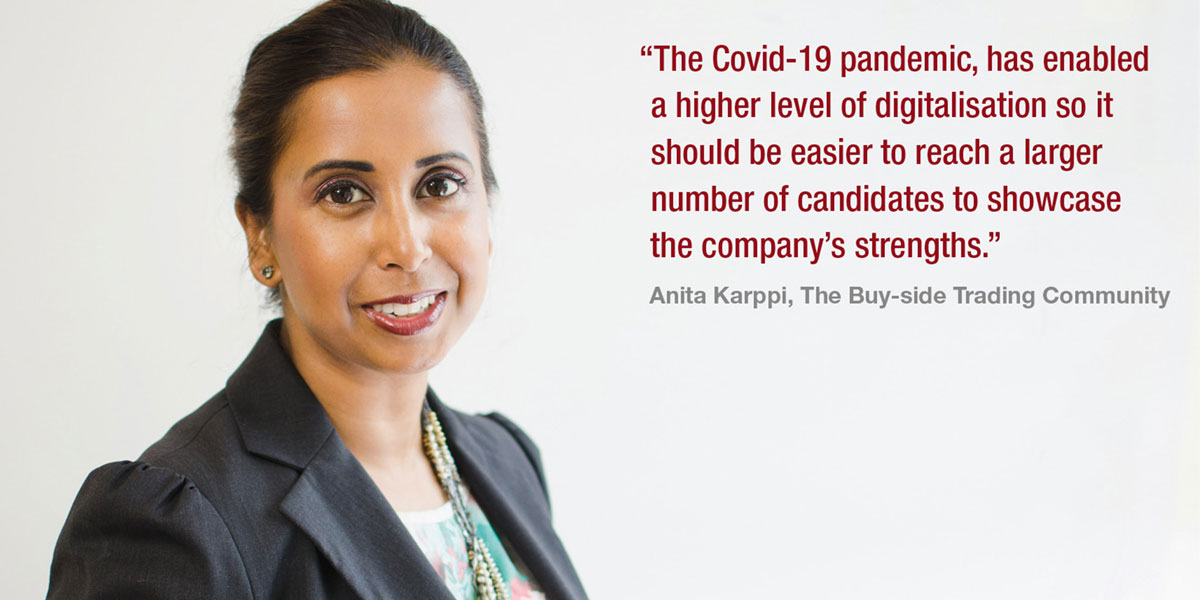 She notes that financial services companies need to provide more internships, apprenticeships and opportunities to attract a diverse group of graduates to apply for the opportunities. She says, “the Covid-19 pandemic, has enabled a higher level of digitalisation so it should be easier to reach a larger number of candidates to showcase the company’s strengths.

Upcoming corporate disclosure regulations will highlight companies who are actively working in the right direction and investors have already developed social responsibility funds and will increasingly be encouraged to place their investments in socially responsible firms. Measures and objectives are useful at the same time I would caution against any strict regulation that may end up discriminating against any person from a particular group.”