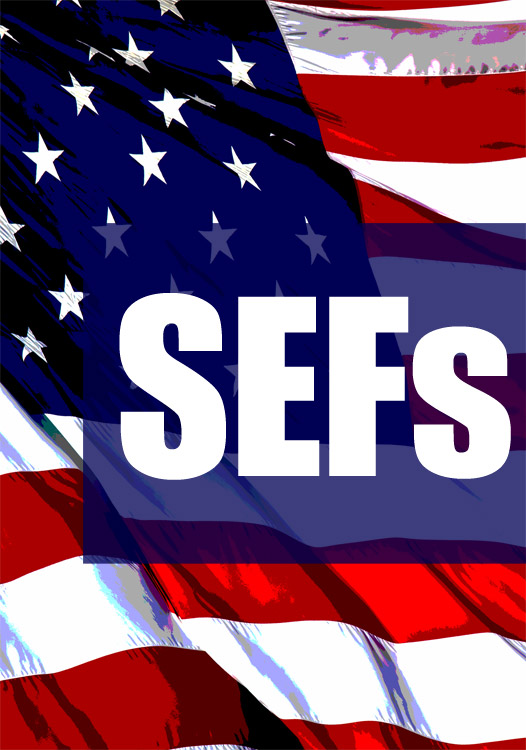 SEFs made their debut over a year ago but they have not taken off as expected. Lynn Strongin Dodds looks at the obstacles in their way.

The US may be ahead of Europe on the regulatory curve, but there are lessons to be learnt from the unintended consequences of a new regime. Swap execution facilities (SEFs) is a case in point. They came into force with great fanfare last February but have yet to deliver on the open access trading promise. Volumes may be rising but they are still concentrated in the hands of a few top players.

“It is striking that this market is moving so slowly, but it is big and complex and the result is that we will not see a revolutionary but evolutionary change,” says Mark Brennan, head of Business Development, Americas at technology group ITRS, “There needs to be a cultural shift, but in the meantime the incumbents will continue to dominate for now.”

The latest FIA SEF tracker report published in June bears this out. It shows that March was the most active month since January 2014 with trading in interest rate products rising for the third month in a row while credit received a boost from the launch of new series for the major credit indices. Foreign exchange products also jumped almost 20% from February although this was still below the highs set in September and October last year.

ICAP retained its pole position in interest rate swaps (IRS) and other non-forward rate agreements. Its two SEFs had a combined 24% market share while Tradeweb and Bloomberg, which primarily target dealer-to-customer trading, accounted for 14.7% and 13.4%, respectively, in March. Meanwhile, BGC Partners, which bought rival GFI earlier in the year, led the FX trail with a 44.8% chunk of the market.

Bloomberg continued to be the leader in SEF trading of credit default swaps (CDS) and options, but its market share slipped to 68.4% in March, the lowest since the first quarter of 2014. Tradeweb came in second with 12.1% market share in credit during March. Many new players have struggled to make their mark. One exception is MarketAxess which offers disclosed and anonymous request-for-quote (RFQ), central limit order book (CLOB), and click-to-trade functionality for credit products. Its SEF recently reported a hefty 390% year-over-year hike in volumes which led to a doubling in its market share to 8.7% compared to the same period last year, according to the FIA SEF Tracker.

The same trends are reflected in a recent TABB Group report – US Swaps 2015: Paradise Lost. “Only 40% of all US interest rate derivatives (IRD) trading is executed via SEFs today, but in October 2013 before the regulation went live in February, people expected it to be the majority” says Colby Jenkins, research analyst at TABB Group and author of the report. “We are also seeing the same incumbents compete for a narrowing market share. In early 2014 when Made Available to Trade (MAT) determinations went into effect, (mandating that certain swaps begin trading electronically), we saw around 24 SEFs vie for a ranking. Over a year later and half a dozen account for around 90% of the volume while two have 50%.”

Dr Anshuman Jaswal, senior analyst in Celent’s securities & investments group, adds, “Overall, MAT is not happening as planned and smaller SEFs, despite their advanced technology, are struggling. One of the biggest issues is that a lot of trading is still done over the phone and my view is that people underestimated the strong relationship between the broker and buyside. When they do use platforms, evidence shows that they go to players that they know such as Bloomberg and Tradeweb which trade on a RFQ basis. This explains why the central limit order book (CLOB) has not done as well as expected.”

In general, SEFs offer two general methods of trading – the RFQ where orders are fulfilled by broker-dealers and the CLOB which operates in the same manner as a stock exchange. However, as sellside inventories shrink due to stricter capital and leverage ratios under Basel III, buyside firms want all-to-all trading through CLOBs to maintain liquidity in the swaps market. The main stumbling block is that SEFs typically require post-trade name disclosure on credit and interest-rate swaps which has enabled a cadre of big banks to dominate.

The disclosure of customers’ identities, known as “name give-up,” has its origins in the anonymous markets for uncleared swaps, where participants needed to limit the firms with which they traded in order to manage counterparty credit risk. The advent of straight-through processing for SEF-executed trades, including the pre-trade credit check process, has eliminated any need to use it to either manage counterparty credit risk or facilitate clearing submission.

The status quo has been allowed to remain because when developing the regulatory blueprint, the Commodity Futures Trading Commission (CFTC) didn’t include a requirement that would enforce anonymity for swaps traders who seek it.

Buyside trade groups such as the Managed Funds Association and the Alternative Investment Management Association (AIMA), argue name give-up is hindering their adoption of SEFs and they would like to see the two-tier market – dealer-to-dealer and dealer-to-client – be broken down. Their hope is for a framework where SEFs do not specifically exclude certain participants and they are encouraged by the recent White Paper issued from Christopher Giancarlo, a new commissioner and formerly executive vice president at GFI Group, an interdealer broker.

Giancarlo has called for a reworking of the Dodd-Frank Act and stated that the futures framework should not have been used for its OTC counterpart as the two generate products differently. He also notes that while high-frequency trading is common in futures markets, it is absent from swaps markets.

“Name give-up is cited as one of the big obstacles to the development of the market,” says Brennan, “It is a holdover from legacy practices and the regulations have not prohibited it. The CFTC is looking into this but I do not think an opinion will come any time soon – the earliest could be year end.”

Michael O’Brien, director of global trading at Eaton Vance, which manages $296 bn adds, “We knew it wouldn’t happen overnight and although we will get there, a few issues such as name give-up and average pricing have to resolved. There is no liquidity in the CLOBs because some SEFs demand users give up anonymity, which is the opposite of an order-driven market. Part of the reason I trade on an order book is to be anonymous. For example, in the futures market, I do not know who is on the other side.” 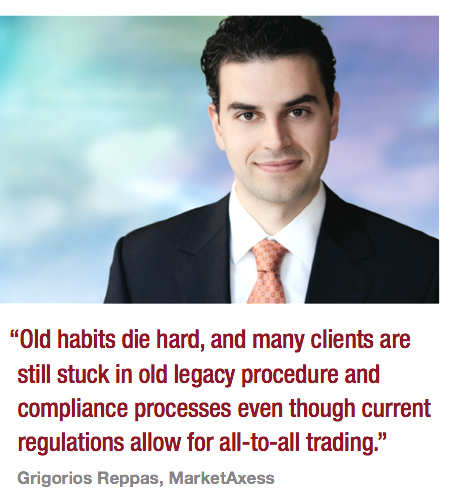 As for average pricing, buyside firms argue that CLOBs must develop the same level of functionality as that offered by cash equities and futures exchanges. In other words, calculations for a “parent” trade comprising multiple “child” transactions. “It is a big challenge for asset managers,” says O’Brien. “If I’m doing a trade across 20 accounts, there is a lot of operational work involved. It is easier to go to RFQ and do the one trade. If these two obstacles are addressed I do not think there will be a tsunami of liquidity but you would definitely see more asset managers trading on order books.”

Education is also needed, according to Grigorios Reppas, CDS Product Manager, at MarketAxess. “Old habits die hard, and many clients are still stuck in old legacy procedure and compliance processes, even though current regulations allow for all-to-all trading” he adds. “Clients are primarily using the current market structure, taking bids and offers from broker-dealers, but it is up to us to explain how we can provide alternative liquidity.