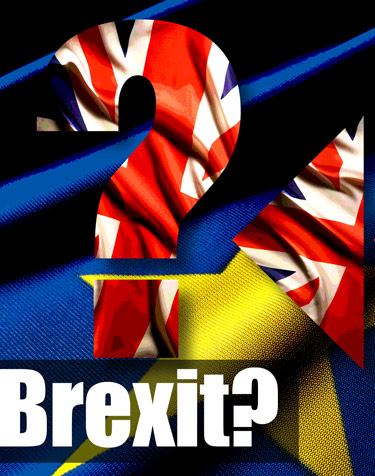 Louise Rowland presents all sides to the arguments.

Business as usual … or the Long Goodbye? No one knows which way the European Union referendum will go. Or even, right now, the date it will take place. Within an increasingly febrile climate of rumours and hyperbole, the only certainty is that the battle over Brexit will be bruising.

The Prime Minister is deep into his campaign to negotiate changes in the UK’s EU membership terms. Meanwhile, the question vexing the City is ‘what would a UK withdrawal mean for London as the region’s leading financial hub?’

The country may be fairly evenly split, but within the financial services sector, it’s a very different story. Estimates say a 70/30 majority would prefer the UK to stay in, with investment banks leading the charge.

It would be madness to walk away from a single market of 500 million people in 28 countries, say supporters of the status quo. The EU is the largest consumer of UK exports of financial services, and around two thirds of the EU’s net exports in financial services come from the UK. Some 250 foreign banks are based in the capital.

Post-Brexit, they argue, the UK would no longer have passporting rights to the single market and London would be unable to offer the full range of financial services. It could then face a realignment where it loses out to other business-hungry financial hubs such as Paris or Frankfurt, Singapore, Hong Kong or New York. Some foreign institutions with large UK operations such as Deutsche Bank have already threatened to move their headquarters out of London if the country leaves.

The UK also needs to be able to influence relevant EU legislation, they add. Pull out, and you lose voting and veto rights plus EU legislators might well make it harder for UK financial firms to do business unless they have a physical base on the Continent. In addition to complying with EU rules, the UK would also have to deal with its own regulatory regime. There has even been speculation that credit ratings agencies would downgrade the country if it goes it alone.

Groundless scare-mongering, counters the ‘out’ camp, largely comprised of hedge funds keen to shirk the costly, time-wasting shackles of EU regulation and to develop closer ties with the US and Asia Pacific. London’s global clout as a financial hub would protect its pre-eminence and foreign banks would continue to maintain a major presence here. After all, they point out, the UK’s refusal to join the eurozone didn’t harm London’s standing. If anything, the EU would lose out if it refused to do meaningful business with a liberated UK.

There may only be two options available on the ballot paper, but things couldn’t be less black and white. TheCityUK, a membership body representing the UK financial services and professional services industries, published a report in 2014 outlining eight possible post-referendum scenarios – five for ‘out’ and three for ‘in’. These cover the full spectrum from continued, ever deeper membership to options such as the UK joining the European Economic Area (EEA) and/ or European Free Trade Association (EFTA) Also on the list are the undertaking of bilateral agreements as well as relying on its membership of the World Trade Organisation (WTO) as a basis for trade with the EU.

Some point to the looser ties Switzerland and Norway have with Europe as evidence that there is life outside the EU. Others insist that any similar renegotiations by the UK would be costly, tortuous and could take years to achieve.

Markets recoil from uncertainty and senior industry figures warn that some international banks have already put investment in the UK on hold while the country decides its future. “London’s balloon is deflating slowly,” says one senior investment banker. “All the uncertainty we currently face is like Usain Bolt running with a lump of lead on his back.”

“The prospect of Brexit is undoubtedly casting a pall over London’s predominance as a financial centre,” agrees Christian Lee, who leads the clearing, risk and regulatory team at Catalyst, a consultancy firm. “There’s a problem with inward investment, because people are thinking more short term than long term and City companies themselves are therefore operating sub-optimally.”

The trend for ‘banker bashing’ is only exacerbating things, he adds, citing the introduction of super-taxes and hefty regulatory fines. “That’s a big deterrent, particularly when you compare London with Singapore and Hong Kong. The UK needs to be far more financial-services friendly.”

Others are less concerned in the short term. “Brexit would not be like Grexit, it would be a slower, more contained and managed event,” says PJ Di Giammarino, CEO of independent think-tank JWG. “From a regulatory perspective, any change in the EU is all about planning for the ‘unknowns’ that will affect the rule books. There are many known Brexit scenarios, but new ones could emerge, including the market changes caused by MiFID II in the run-up to 2017.”

He adds that “firms need to understand all their regulatory deltas and the potential risks inherent in them in order to take a risk-based approach to mitigating their impact. If Brexit did happen, it would not take place overnight. With tens of thousands of pages of regulatory change to digest for next year, I don’t think people have any time to jump up and down about the potential impact of a longer term possibility.”

Are most firms working on a Plan PB – Post Brexit? It’s concentrating minds, says Mark Holland, partner at business transformation consultancy Holley Holland. “What is good is that firms are actively shining a light on how their organisation works in order to be prepared for all scenarios. They’re taking a holistic view, looking at data and their business architecture, where their operations are based and so on. Previously those activities have been put on the ‘too difficult’ pile, but there are so many possible permutations post-Brexit that the best an organisation can do is to be aware.”

As the battle over Brexit heats up, even the most pro-Europe firms agree that there is a clear need for a stronger financial services framework within the bloc, including sufficient protections for non-eurozone countries to avoid a two-speed Europe. Reform is definitely high up the agenda.

Mark Hemsley, CEO of pan-European equities trading venue BATS Chi-X, is convinced that the UK’s interests are best served not only by staying in the EU, but by committing itself wholeheartedly to the project. “In the future, I think we need to be more actively involved in EU and its workings, with more senior people batting for us in Europe. We need to end the uncertainty for the UK so that we can say ‘this is it for many years to come’. It’s a difficult line to play – not only to be in, but to play an even deeper part – but we’re a large economy and have an impactful financial services business. We are a very positive presence in Europe.” 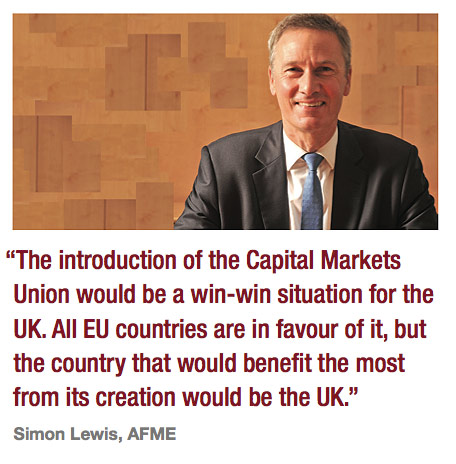 Simon Lewis, CEO of Association for Financial Markets in Europe (AFME), points to the Capital Markets Union, a flagship project now being developed by the European Commission, as a powerful example of what the UK stands to gain by staying within the EU. “The introduction of the Capital Markets Union would be a win-win situation for the UK. All EU countries are in favour of it, but the country that would benefit the most from its creation would be the UK. It’s one of the many reasons why AFME is so supportive of the UK remaining part of a single integrated market in financial services.”

How will the landscape look five years from now? For referendum, read ‘neverendum’, quips one banker. Whichever way the vote goes, this will be a step-by-step process with many twists and turns ahead.

Ignore all the alarmist chatter, one consultant advises. “There’s a lot of brinkmanship going on but London is not going to wake up one day cut off from Europe. It’s been the centre of financial trading for ever. We’ve got the language, time zone, infrastructure and a legal system that’s the envy of the world. Any changes would definitely be very gradual.”