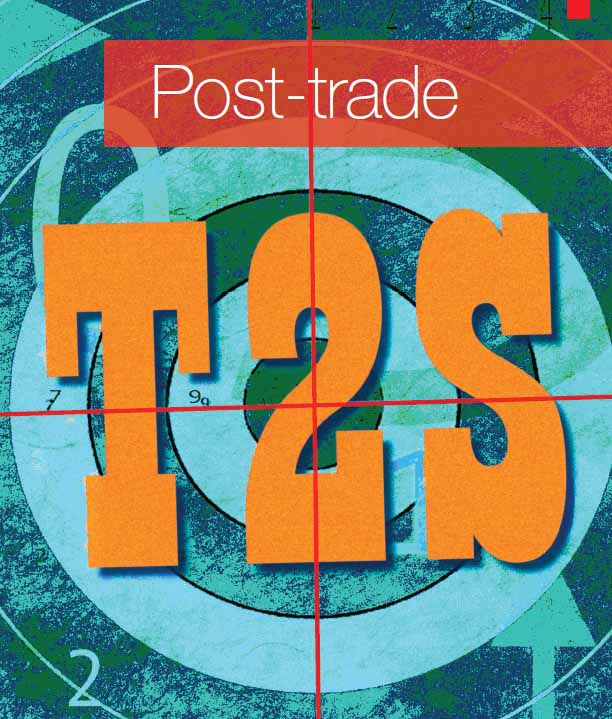 THE UPS AND DOWNS OF T2S.

Mary Bogan charts the progress and bumps along the way.

The recent migration of some big hitters in the central securities depository (CSD) world onto its platform, and the fifth and final migration wave scheduled to take place in September, Target2Securities (T2S) will soon account for 90% of settlement of European securities.

However, while some institutions report significant benefits from this costly initiative, there is also palpable disappointment that, nine years after unveiling a vision for a new European settlements landscape, in which a multiplicity of national platforms and post-trade practices would be replaced by a single, low-cost, borderless market with centralised liquidity and collateral pools, meaningful integration in the European clearing and settlement space is still light years away and could even be receding.

A long and winding road

Getting T2S off the ground has been a long and bumpy ride. A voluntary, rather than mandatory European Central Bank (ECB) initiative, securing consensus amongst over 20 CSDs has been one issue. But implementation has also been a challenge.

A higher-than-expected settlement fail rate in the earlier stages of the launch, requiring more fine-tuning and system testing, meant a few CSDs, including Monte Titoli, Clearstream and Euroclear, were forced to postpone their migration dates. With all three now safely onboarded though, and Spain and the Baltics expected to make the September deadline, T2S appears to be nearing the finish line.

“Technically speaking, T2S has been a huge and difficult project,” says Isabelle Olivier, head of clearing and settlement for SWIFT. “It is the first settlement platform to use ISO 20022 to any large extent and has presented major changes for CSDs and the entire community. But I think we can now say we have a pan-European platform for settlement and can expect to see the first benefits emerging soon. With Clearstream on board, we can also expect an increasing number of cross-border transactions and not just the migration of domestic flows.”

Originally designed to bring down the cost of cross-border settlement to domestic levels, the early benefits delivered by T2S are not the ones expected. Liquidity savings, resulting from the ability to use a central single pool of liquidity to settle over multiple markets, have become far more important to players.

“One of the key aspects of T2S is it eliminates an anomaly no other single currency bloc has,” says Swen Werner, regional T2S product and implementation director at State Street. “Up until T2S, settlement liquidity in euro central bank money was not freely usable for cross border settlement. But now you can buy in Germany and sell in Italy and the settlement liquidity you need to provide is a net figure. This is something that makes a big difference particularly to sellside institutions where intraday credit extension is key to their business model.”

Liquidity savings have also benefitted EuroCCP, currently the only equities clearer with an operational strategy to connect directly to T2S, thanks to auto-partialling, a particular T2S feature. “In markets where T2S has been successful in auto-partialling, we have seen a significant reduction in overnight positions. As we have no securities left in our account overnight, the liquidity required to fund those positions has dropped dramatically,” says chief executive Diana Chan.

In addition to liquidity savings, players also report T2S has simplified operations and reduced risk. “Instead of connecting to the seven CSDs we deal with, all using different rules and systems, we’ve consolidated them into just one connection to the shared settlement platform. The reduced complexity is a big operational benefit” says Chan.

At State Street, operational benefits are materialising too. “By locking European markets into a single infrastructure it means new service requirements or new regulatory requirements only need to be developed once instead of multiple times,” says Werner.

More widely T2S, in tandem with the new CSD regulations, has been a catalyst for institutions to rethink strategy and market positioning, review their products and service and even embark on new collaborative ventures.

A key trend has been a move away from the one-stop shop accompanied by an unbundling of services. “T2S has helped split the securities life cycle into pieces,” says Olivier. “Whereas before you could rely on a provider for all services – settlement, corporate actions, asset servicing and collateral management, now it’s common for different providers to offer different bits. So firms may use T2S for settlement and then cherry-pick the best asset servicing provider or collateral management service for their needs. That has stimulated increased innovation, competition and collaboration in the market.”

Announcements of new partnerships, heralding a reshaping of the post-trade space, are coming thick and fast. JP Morgan, for example, recently announced that it is to collaborate with BNP Paribas in an arrangement that enables JP Morgan to manage its own liquidity and settlement on T2S while relying on BNP Paribas for local market asset and tax servicing.

Meanwhile UBS recently became the first firm to use a new platform built by Clearstream and Citi under which UBS gets a single T2S access point and single integrated liquidity and collateral pool, Citi provides clearing settlement and asset servicing while Clearstream supplies the safekeeping, lending and securities financing solutions.

However, while the technical implementation of T2S is considered a success and early benefits look promising, there is still considerable disappointment and frustration that this lengthy and costly project, estimated to have cost the industry over E1 billion in infrastructure alone, has had only a limited impact.

“Coming out of the authorities’ frustration with fragmentation in the custody and settlement market, one of the original aims of T2S was to generate greater cross-border settlement efficiencies and encourage the standardisation and harmonisation of business rules,” says Roger Storm, head of clearing and risk operations at SIX x-clear. “And against this backdrop there is disappointment.

He adds, “As one of the first firms onto the platform, adopting the new ISO 20022 standards and supporting the new harmonised framework, we hoped to have more of a first mover advantage and be part of a faster consolidation and evolution story. This hasn’t played out. So, despite the hurrah that the platform is working as intended, the original aims have yet to materialise.”

“We should not lose sight of the fact that some of the markets that have already converted to T2S have not yet fully conformed to T2S harmonisation standards. Most of these loose ends relate to corporate actions and market claims and need to be tied up to generate some of the project’s expected efficiencies.”

There are also fears that the drive towards greater harmonisation and standardisation of Europe’s fragmented settlement market may even be running out of steam.

While some argue, for example, that national efforts to protect the independence of local CSDs is the prudent defence of a key piece of financial infrastructure, others suspect it is simply governments defending home turf. More worryingly, a new European zeitgeist may even be taking hold.

“One of the phrases that keeps recurring in industry discussions and conferences is, ‘currency protectionism’,” says Storm. “There seems to be a counter move in various markets, including those that have been fighting hard for an open Europe, to bring back clearing and settlement into the domestic space. If it’s a rising sentiment in the market, it’s one that cannot be good for liquidity, harmonisation or the future of pan-European settlement.”