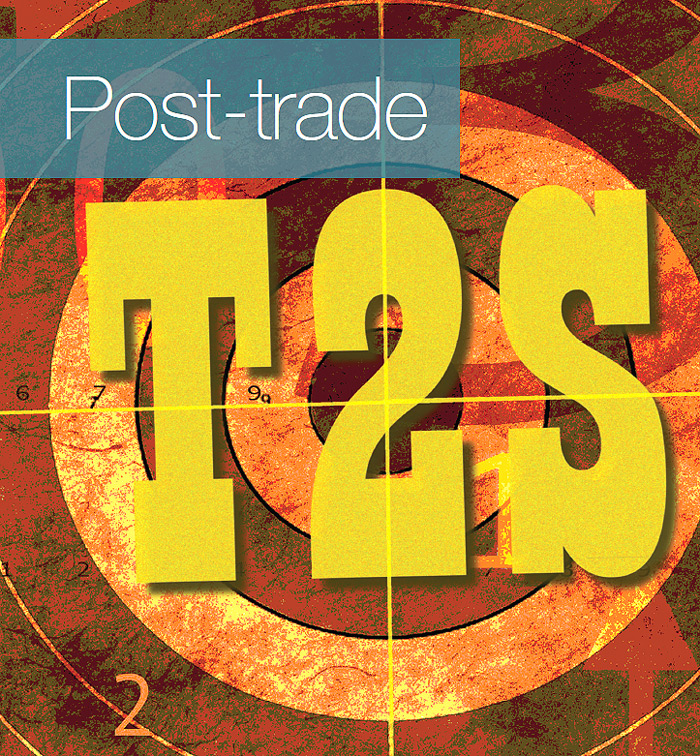 Getting T2S off the ground hasn’t been easy. Mary Bogan explains the latest challenges and opportunities.

Conceived in the wake of the financial crisis, Target2Securitites (T2S), the EU project designed to cut the cost, risk and red tape of settling domestic and cross-border transactions in Europe, finally got off the starting blocks last summer. A few early faltering steps aside, the project hit cruise mode surprisingly quickly.

However, no sooner had the champagne corks left the bottle than the project was back on old form. With the announcement that two key players, Euroclear and Clearstream, are to join the system significantly later than planned, the latest delay has ratcheted up the battle for commercial survival a notch, and left some wondering where the post-trade market is heading.

“The EC is pushing the industry on a journey towards an integrated, harmonised and consolidated land,” says Axel Pierron, managing director of financial consultancy Opimas. “But this journey could be like Christopher Columbus’ expedition to discover a western route to India and China. We will eventually land on new territory. But it will be different from the one envisioned on our departure.”

Built and operated by the ECB, T2S is an attempt to create a single, centralised securities settlement platform in Europe. In tandem with the regulatory initiative Central Securities Depositories Regulation (CSDR), it aims to harmonise the confusing myriad of national rules and post-trade practices applying to settlement in Europe and leverage the platform’s economies of scale to reduce settlement costs. As cash and collateral can be pooled across T2S markets and the platform settles in central bank, rather than commercial bank, money, it also promises to optimise liquidity and collateral management for banks as well as increase settlement safety and efficiency.

To date, 23 central securities depositories (CSDs) from 21 countries have signed up to join T2S. Following recent delays, these will be on-boarded in five, rather than four, migration waves ending September 2017.

Last June, Greece, Malta, Romania and Switzerland became the first CSDs to go live on the T2S platform. It was only at the end of August though, when Italy’s Monte Titoli joined (having missed the original launch date due to testing issues), that the system was really challenged.

“Moving from the old to the new T2S settlement platform was a delicate and complex operation,” says Alessandro Zignani, Head of Post Trade Business Development at LSEG. “During the T2S migration weekend, we transferred in the region of 250,000 lines of stock, 50,000 ISIN and 90,000 settlement instructions.”

Getting clients up to speed with changes needed to Standard Settlement Instructions (SSIs) and linking static data were the main issues encountered. Overall though, the launch was problem-free.

“At the end of the weekend, we’d hit our deadline for migration from the old to new environment six hours ahead of schedule. On day one, there were a few minor teething issues but we were back to a 98%-99% settlement rate in just a few days,” says Zignani.

Six months on and Monte Titoli says clients are benefiting from a robust platform and working functionalities that are reducing their funding needs.

“With one euro of funding, you can settle up to five or six euros worth of securities,” says Zignani. “The cash required to settle funding activity is kept to a minimum with T2S.” 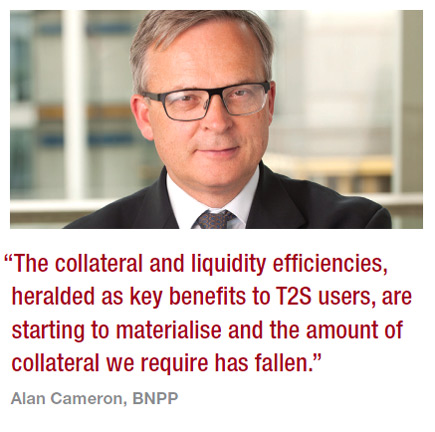 BNP Paribas confirms that T2S is producing bottom-line benefits. “It’s already looking good,” says Alan Cameron, head of relationship management. “The collateral and liquidity efficiencies, heralded as key benefits to T2S users, are starting to materialise and the amount of collateral we require has fallen in line with our expectations.”

For Monte Titoli itself, the bottom-line benefits are of a different kind. “We want to be a major European player and first-wave entry into T2S is helping us build a pipeline. International clients who, historically, had a relationship with Monte Titoli through a custodian bank now want to open a direct account to benefit from T2S. This year we expect two major international custodians to open a direct account – a strong signal that our strategy is working.”

Meanwhile EuroCCP’s decision to become the first and, as yet, only CCP to connect directly to T2S, is also showing promising signs.

“We’ve seen a big improvement in settlement efficiency since launch,” says Diana Chan, chief executive of EuroCCP. “Being a DCP to T2S gives us special recognition as a CCP that we do not get in all markets and access to some useful new features. In particular, prioritisation of CCP trades and the auto-partialling feature, which optimises the securities available for onward deliveries, coupled with the hold and release function now widely used by agent banks, are the reasons why we think our settlement rate is now near perfect. We’ve seen the overnight positions stuck in our account reduced to almost nothing.”

While first experiences of T2S seem generally positive, the delayed entry of big hitters Euroclear and Clearstream into the system (to give more time for testing) has undoubtedly disappointed and tempered market optimism. T2S is a volume-dependent business. The CSDs in migration waves one and two together account for just 20% of overall volumes. When Euroclear ESES joins in September 2016 and Clearstream connects in February 2017, waves three and four will make up a layer representing another 65%.

A study by Deutsche Börse in 2014 forecast that T2S would cost in the region of E1bn to roll out and produce costs savings for brokers and custodians of between E30-70m a year. But recent delays, says Clearstream, have made cost savings harder to realise than previously thought. Ongoing delays and onerous regulatory changes were also thought to be the main reason why BNY Mellon put its new CSD project on hold last year.

Finding new markets to add more volume will be key to T2S success. “We always knew we’d need more markets in the system to realise the full potential of efficiency savings,” says Cameron. “Initial discussions are already being held to bring in the Eurobond and funds markets. The UK and Switzerland will probably want to see more progress before joining. But now the project has jumped cleanly over the first fence, and if we can get France and Germany safely on board, there will be a good case to be made.”

“T2S will bring some necessary improvements to European post-trade infrastructure but I doubt T2S and CSDR will be sufficient to drive down settlement costs significantly or launch a wave of consolidation in Europe,” says Pierron at Opimas. “In a region where 80% of settlement business is already concentrated in the hands of just two CSDs, there will be few opportunities for a reduction in market infrastructure providers.”

The barrier is partly one of logistics and prudence. “Merging CSDs is more complicated than most people imagine,” says Tony Freeman executive director industry relations at DTCC. “Also there is a strong argument to say that each country needs a CSD as part of its financial architecture. I think we’ll see more co-operation and technology-sharing to cut costs but many will retain independence.”

Another factor is basic economics. “In just the same way that, after MiFID, we saw firms cherry-picking their equity trading, we’ll see the big players in post-trade cherry-picking the most profitable issuance business,” says Pierron. “Local CSDs could become marginalised if they don’t act but they won’t disappear. I don’t see Euroclear or Clearstream trying to capture the issuance business of Romania, for example.”

In addition, the new ecosystem could bring new opportunities for smaller CSDs. Building on existing strong relationships with issuers, they could offer extra services and financing to plug the gap left by banks’ retreat from the SME sector. There could also be opportunities to innovate by, for example, leveraging their knowledge of issuance practice and regulatory requirements to develop new blockchain technology contracts.

“I expect some efficiency gains thanks to T2S,” says Pierron, “but the benefits won’t be evenly shared across all EU countries and numerous discrepancies will remain. The emergence of a European equivalent to DTCC is unlikely to happen anytime soon.”