After many fits and starts, Target2Securities (T2S) looks like it could actually reach the mid-2015 finishing line. Market participants have revved up their engines and are in different stages of preparation for Europe’s transformational post-trade reforms. Although it is too early to predict how it will shake out, firms want to ensure they not only overcome the hurdles but also leverage the opportunities.

The T2S platform, a pan-European settlement slated to offer delivery versus payment settlement in central bank money, was first mooted in 2006. The aim was to have central securities depositories connect to T2S and provide their users with a single connection into all other CSDs in the system, while the central bank supports the cash side of the settlement. The goalposts have been moved several times but the first set of CSDs are scheduled to migrate to the T2S platform in June 2015 while the planned second and third waves have been shifted forward to March and September 2016, with a fourth wave introduced for February 2017.

“We are definitely seeing strong progress being made,” says Isabelle Oliver, head of clearing and settlement at SWIFT. “In 2012, there was still a belief that T2S would not materialise or that it would be delayed or reduced in scope. These concerns have passed and the expectation is that it will go live by mid-2015. The main reason is that confirmation by the Eurosystem (ECB and Euro area national central banks) that the project was going according to schedule created a wave of awareness and confidence in the market.”

The other impetus is Central Securities Depository Regulation (CSD-R) which was recently approved by the European Commission, European Parliament and the council of ministers. It will also play an important role in not only creating a single market for securities settlement, but also harmonising settlement times to two days, and cutting cross-border settlement costs. Speaking during a recent ECB conference on post-trade harmonisation in Europe, Patrick Pearson, head of financial markets infrastructure at the European Commission, said the CSD-R was “absolutely critical – it is the missing link” and that it was crucial in getting “T2S up and running. They go hand in hand, so it is an absolutely vital piece of legislation.” 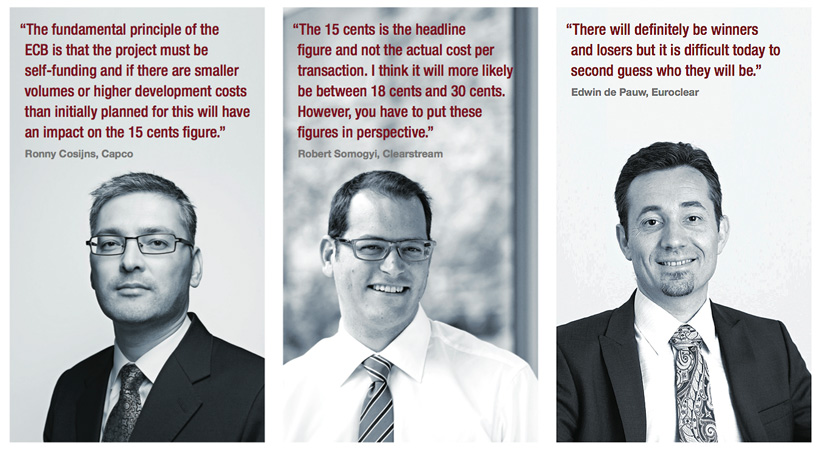 Not surprisingly perhaps, the pricetag of implementing the project as well as the potential savings it can generate are uppermost in the minds of market participants. Four years ago, the central bank stated that fees for trades passed over T2S would be set at 15 cents per transaction, based on “conservative assumptions” about volume throughput. The problem today is that settlement volumes have been disappointing and are around 18% lower than was anticipated in 2010.

“The fundamental principle of the ECB is that the project must be self-funding and if there are smaller volumes or higher development costs than initially planned for this will have an impact on the 15 cents figure,” says Ronny Cosijns, a partner at global business and technology consultancy Capco. “It is fair to say at this stage, that 15 cents could still be the final price per trade but it will only become a certainty after the ECB holds its review in 2015.”

Robert Somogyi, senior vice president, business strategy at Clearstream, the post-trade services provider of Deutsche Börse Group, adds, “The 15 cents is the headline figure and not the actual cost per transaction. I think it will more likely be between 18 cents and 30 cents. However, you have to put these figures in perspective. Clearstream’s decision to charge T2S fees at cost will ensure a saving, and for other markets there could also be a massive saving’’

Edwin de Pauw, head of T2S Product Management, Euroclear, also believes “it is dangerous to only focus on the cost of settlement. The objective of a number of regulatory initiatives being implemented in Europe is to increase the fluidness of capital, reduce the number of trade breaks, streamline and harmonise operational processes as well as increase the efficiency of the European post-trade landscape. T2S is only one component of this.”

Diana Chan, chief executive officer at EuroCCP echoes these sentiments. “The cost is difficult to quantify. The market infrastructure is a fixed cost but the volumes will change over time. I also think priorities are different. In 2006, cost was the main focus but after the financial crisis, security and safety rose to the top of the agenda. This is why it is important to look at the other benefits T2S will bring in terms of collateral management and the potential liquidity.”

While market participants are forging ahead to capitalise on these new opportunities, each will have their own set of challenges, according to the Celent report. It notes that CSDs, who will have a significant part to play, will be forced to change their business models in order to stay in the game while custodians will need to seek alliances to find economies of scale. Brokers will also be impacted and they may have to outsource parts of their mid and back office processes to remain competitive.

To date, 24 CSDs have signed on to T2S. “From our perspective T2S offers major opportunities,” says Somogyi. “Our overall strategy is to be a single gateway to all T2S markets – we represent 40% of T2S volumes based on today’s figures, so we could be a natural T2S entry point. It has also enabled us to look at what we offer via T2S, not just in relation to settlement costs but in terms of wider services as well. For example, we will widen the scope of securities eligible for settlement on T2S to “non-T2S” securities, including Eurobonds, by linking up our international central securities depository (ICSD) to T2S. This will give customers more choice as they can choose to settle on T2S in either commercial bank money (via our ICSD) or EUR central bank money (via our CSDs.)

We are also looking to leverage T2S as a catalyst for our collateral optimisation solutions whereby the T2S platform will help customers seamlessly move collateral between T2S markets, via a consolidated T2S liquidity pool.”

Euroclear is also gearing up with four of its CSDs – Belgium, Finland, France and the Netherlands – poised to migrate. It has expanded its service offering and products to include asset servicing, optimal collateral and liquidity management plus it is planning to shorten its settlement cycle to T+2 from October, bringing its operations into line with clearing in Germany and Russia, which already operate T+2.

As for custodians, BNY Mellon launched its own CSD in Belgium last year while Deutsche Bank is carefully guiding clients through the new world settlement order. “We work with clients to help them understand what T2S means to them and what solutions we can provide,” says Graham Ray, director, global product management, direct securities services, Deutsche Bank. “We are also helping them look past T2S at the opportunities as well as efficiencies that can be gained through collateral as well as liquidity management.”

Of course, as de Pauw, points out, “there will definitely be winners and losers but it is difficult today to second guess who they will be. Some believe that those firms which focus only on local markets may be challenged. But, it will take time for the different European capital markets to be fully harmonised due to issues such as local variations in withholding tax regimes. Initially, I think we will see new entrants such as BNY Mellon coming into the CSD space. But that will be temporary and over time, the increased competition will trigger consolidation.”