THE KNIVES ARE SHARPENED.

Battle lines are being drawn around euro clearing and it is not clear who will emerge the winner. Gill Wadsworth canvasses the landscape.

The UK must start battling hard if it is to retain its position as the centre for clearing operations in Europe. Following the Brexit vote last June, European Union stakeholders have expressed concern about London’s dominance in the EU securities and derivatives market once the UK is no longer governed by the bloc’s rules.

Central counterparties (CCPs) are critical in protecting the parties involved in a trade by holding collateral that can be used to compensate those found on the wrong side of a default. Given the fallout from the global financial crisis nearly ten years ago, the European Commission is fearful it will lose control of this important safety net once the UK goes solo. 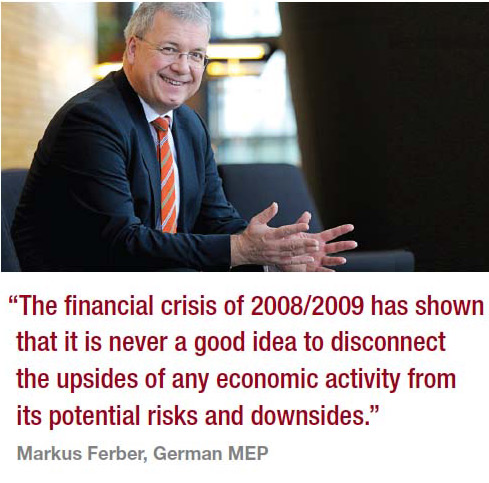 German MEP Markus Ferber told Best Execution that lessons have been learnt from the credit crunch and the EU should not leave itself exposed. Ferber says, “For me the question ultimately boils down to the issue of liability and setting the right incentives. The financial crisis of 2008/2009 has shown that it is never a good idea to disconnect the upsides of any economic activity from its potential risks and downsides.”

He argues that once Brexit is finalised the European Central Bank (ECB) will no longer have a say in UK operations, leaving the EU financial operators vulnerable in the event something goes wrong. “As long as the ECB stands ready to step in with emergency liquidity assistance in the event of a crisis occurring, substantial oversight powers must remain with the European Union. Otherwise, there would be a severe mismatch between supervision and liability,” Ferber says.

For many in the EU this means bringing all clearing operations back onto EU shores leaving the London players with a choice of moving to the EU or seeing their operations, currently worth $900bn and accounting for 75% of all euro-denominated swaps, severely diminished.

In June regulators in Brussels made clear they wanted a new system for European clearing houses including the power to bring UK operations into the eurozone. At the same time, all operations that deal with significant numbers of European transactions would be beholden to ECB policies or risk not getting regulatory approval from the European Securities and Markets Association (ESMA). In such a scenario, banks choosing to operate with unregulated UK operations would likely face higher capital requirements.

Eye on the prize

The French and German stakeholders appear to be most vociferous when it comes to forced relocation to the EU. In a joint declaration published in July, Frankfurt Main Finance and Paris Europlace – lobbyists for the German and French financial industries – urged the European authorities to ‘clarify their position without delay’, and called for tough protection for European taxpayers who could carry the can if clearing houses failed to live up to their responsibilities.

Both France and Germany have vested interests in seeing operations moved out of London, since either country would be a potential pretender to the eurozone’s clearing crown. However, their likely success in replacing the UK as a centre for euro clearing has been called into question.

Stuart Campbell, director at Protiviti, says: “Their success depends to some extent on where the location issue on euro-clearing falls out and also on how well they can overcome perceptions about their ability to understand, cope and respond to the complexity of derivatives clearing.”

Campbell says the UK is “widely recognised as having the right infrastructure, legal framework and experience”. He adds: “These are not easily replicated and certainly not in the time remaining between now and March 2019.”

Meanwhile Radi Khasawneh, senior analyst at Tabb Group, questions whether the economics of moving from the UK to either France or Germany had been proven. He says: “The economics of cost – both logistical and execution led – will ultimately determine their success, but given the uncertainties right now, it would be foolish to try and predict [their success].”

Outside of France and Germany it is understood there is a general preference for the UK to agree to follow European Union law – known as equivalence – in the same way it has with the US.

The Commodities Futures and Trading Commission (CTFC) in the US does not demand that dollar-denominated transactions be cleared in the US, and the CTFC has warned the EU to “proceed with care” when it comes to forcing any change to clearing operations.

Campbell agrees that the EU could look at replicating the UK/US model. “A compromise would be for the EU to adopt a model similar to that used in the US, that would give the EU supervisors direct access to London based CCPs in the same way currently as the CFTC and the SEC,” he adds.

Devil in the detail

However, he warns that the two sides would need to determine how to achieve financial stability particularly during periods of stress. It is understood that Sweden, Spain and Ireland all favour keeping operations in the UK. Sweden believes a forced move would be excessive while Ireland is understood to have concerns about parties being left exposed to default as they seek to find alternatives to their UK-based clearing houses.

Campbell believes the UK would adapt well to oversight from ESMA and argues that although there are regulators in different countries with opposing priorities and cultures, there is no reason why the UK could not work with an EU authority.

“Direct supervision by ESMA would bring a new dimension. However, UK CCPs have had to learn how to meet the varying requirements and manage expectations. Let’s not overlook that under EMIR [European Market Infrastructure Regulation], on derivatives, central counterparties and trade repositories, UK CCPs are already subject to some European supervisory or regulatory oversight through the use of the supervisory college, albeit with the Bank of England having responsibility for direct supervision,” he says.

While the pragmatic approach might be for the UK to keep its clearing houses in London and be governed by ESMA, there is no guarantee the EU will agree to retaining the status quo. Khasawneh says London needs to match up to its European and US competitors if it is to retain its place as the leading centre for clearing post-Brexit.

He says: “If [London] is to remain dominant there are dual challenges: that of European alternatives and the US as an emerging trading centre. There is no doubt some ground has been lost post the Brexit vote, and the UK response has been less focused than competitors.” However, he adds that “there seems little scope for a wholesale shift” for clearing houses in the near term.

Campbell agrees and notes that a “relatively small amount of euro-denominated transactions cleared by UK CCPs originate from the EU27’”. He adds: “Some [commentators] are of the view the most that the EU can do is confine European firms to use EU-based CCPs, and so the impact overall may not be so great. However the devil will be in the detail and some markets could be more affected than others.”

With so much of that detail still to be decided, clearing houses will likely face uncertainty as the painful process of Brexit negotiations continues. There remains strong support for bringing clearing under complete EU control but the practicalities, cost and logistics of such action could thwart even the most fervent advocates.

What is clear is that London-based houses must prepare for a range of outcomes and ensure they are not left wanting when a decision is finally made.

The European Securities and Markets Authority (ESMA) has published draft regulatory and impleme ...

Front office outsourcing to accelerate according to Northern Trust report

Front office outsourcing trading is not a new trend on the buyside, but it is accelerating due ...

Deutsche Börse is acquiring a majority interest in Quantitative Brokers, an independent provide ...