Market participants heaved a sigh of relief after The European Securities and Markets Authority indicated it would not introduce stringent restrictions on periodic auctions which have come under fire for allegedly undermining stock market transparency rules. 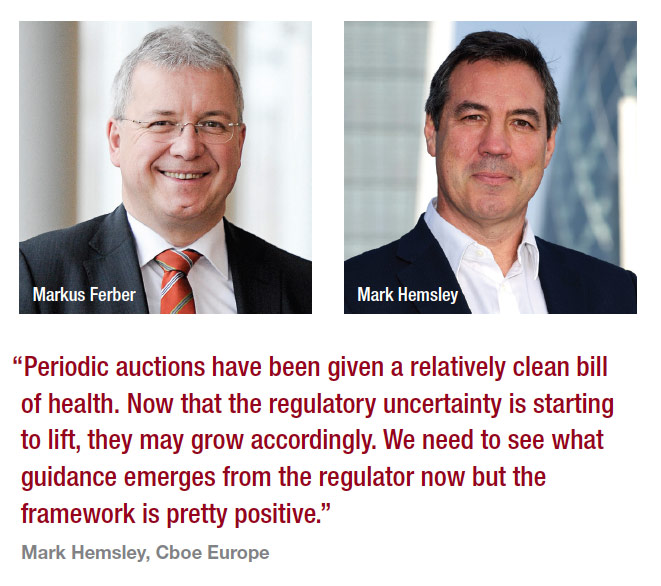 The European regulator has been reviewing these venues which allow fund managers to trade larger blocks of shares while limiting the amount of order information revealed to the market before trades take place. They are seen as an alternative to anonymous venues known as dark pools although some critics most notably Markus Ferber, an architect of MiFID II who sits in the European Parliament, complained that they were a “blatant attempt to undermine the EU rulebook”.

His main objection was that they were being used to mimic dark pools, which had caps placed on them by the new regulation in a bid to move more trading onto traditional stock exchanges, which offer more pre-trade transparency.

They have grown in popularity since MiFID was implemented with research from Tim Cave, a research analyst at TABB Group showing that volumes initially surged at MiFID II’s inception but have since settled at around 2.2% of the order book market. There are currently seven periodic auctions although Cboe Europe has the lion’s share of volumes.

Operators were worried that ESMA would take a hard line but instead the regulator issued a report that said it only intended to set out guidelines for ensuring the auctions meet MiFID II rules on price formation and transparency.

ESMA said it will act to ensure the auctions are used to establish prices for shares rather than simply matching orders at prices formed on primary stock exchanges. It also called on operators to notify traders when auctions begin for “genuine pre-trade transparency”.

Mark Hemsley, chief executive of exchange Cboe Europe, described the regulator’s report as “pretty balanced.” He said: “Periodic auctions have been given a relatively clean bill of health. Now that the regulatory uncertainty is starting to lift, they may grow accordingly. We need to see what guidance emerges from the regulator now but the framework is pretty positive.”

Cave added: “ESMA adopted a considered approach to a new and complex area of Europe’s equity market under MiFID II.”

The European Securities and Markets Authority (ESMA) has published a consultation paper warning ...

After a stellar year in 2019, fund managers will have to create ‘world-class’ client experience ...