After months of brutal lobbying, upstart IEX has been given the green light by the US Securities and Exchange Commission to become the country’s 13th stock exchange. The fight has divided the US equities industry and will change the way shares are traded.

At the heart of the controversy are the speed bumps which are designed to slow orders down by 350 microseconds, thereby shielding the market from high frequency traders. The company has said that the slight delay is enough to prevent traders with a faster view of market information from racing to IEX and picking off orders that haven’t had time to update to the best price in the market. It has also avoided the practice of paying rebates to traders who send orders to its venue, founder Brad Katsuyama said in a recent interview. 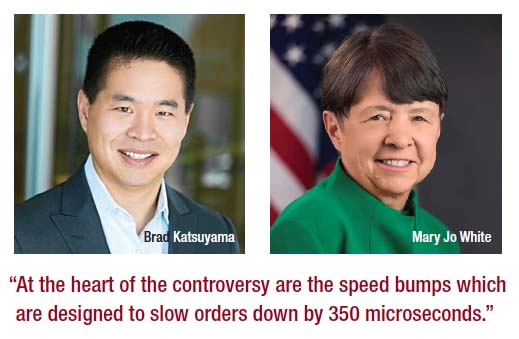 Opponents including Nasdaq and other stock exchanges have argued that the IEX’s speed bump will violate rules mandating that exchanges make their prices available to all parties at the same time. Some brokers have also said the speed bump could restrain IEX’s growth, because some of the fastest electronic trading firms, which rely on the ability to update or cancel orders immediately, will consider any delay as a barrier to their strategies.

There are also those critics that are concerned the new trading structure will add an extra layer of complication into a stock market infrastructure that is already criticised for its complexity, plus it could potentially hurt small investors.

When announcing the decision, Mary Jo White, SEC chair said: “Today’s actions promote competition and innovation, which our equity markets depend on to continue to deliver robust, efficient service to both retail and institutional investors. A critical role of the commission’s regulatory framework is to facilitate the ability of market participants to craft appropriate market-based initiatives, consistent with our mission to protect investors, maintain market integrity, and promote capital formation.”

IEX is run by the people at the centre of the Michael Lewis book, Flash Boys: A Wall Street Revolt, which profiles the early efforts of the IEX team to create a trading exchange that implements speed bumps. The exchange accounts for less than 2% of daily volume in US equities, but being an exchange is expected to boost its market share since brokers now have to route to them if they show the best price at any given time.

Katsuyama said that IEX exchange’s unique structure minimises conflicts of interest and would appeal to large investors such as hedge funds, mutual funds and pension funds, who would have to lean on their brokers to route more of their orders to IEX.