PROGRESS IN THE MAKING.

The European Commission has formally granted equivalent status to US rules on derivatives trading, marking an end to a long running dispute between the country and Europe.

Late last year, the EU and its US counterpart the Commodity Futures Trading Commission (CFTC) finally reached an agreement on a common approach to equivalent recognition of central clearing counterparties (CCPs). However, this is the first concrete move to enable US clearinghouses to be used by EU trading firms.

The two sides, which oversee around 90% of the $553tn derivatives market, have been at loggerheads over mutual recognition of each region’s clearing regime for the past three years. This was mainly due to the European Market Infrastructure Regulation, which dictates that home grown firms can only clear using a non-EU CCP if its rules are deemed to be the same standard as its regulation.

The main items of contention were over initial margin with the Europeans arguing that their two-day period was more stringent and necessary for covering a position of a defaulting member. They also favoured operating on a net basis, which means that clearing members can offset corresponding positions for more than one of their clients in order to reduce the amount of overall margin passed on to a CCP. 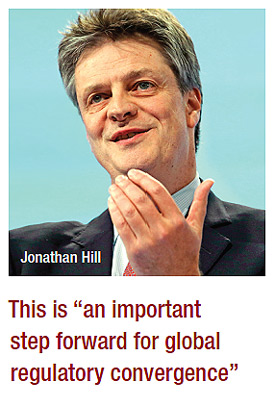 By contrast, the US works on a one-day and gross margining framework whereby clearing members pass on the full amount of client margin to the clearinghouse. The CFTC contended that its method produced higher levels of margin and therefore offered greater protection.

The lack of a deal would have been especially problematic for Europe, where the bloc’s own regulations would have meant banks and other financial firms faced dramatic rises in their use of margin for US clearinghouses such as CME Clearing.

Under the agreement, both sides will adjust their respective rules related to margin; the capital collected to offset possible losses if one side of the derivative trade defaults. Basically, this means that European policy makers will move closer to the US on rules regarding the amount of margin that clients of banks must post to clearinghouses, according to CFTC officials.

European Commissioner Jonathan Hill hailed it as “an important step forward for global regulatory convergence”, and added that the EU will “look forward to the CFTC’s forthcoming decision on substituted compliance”.

There are though still some obstacles to overcome. The CFTC must issue its own procedures for recognising EU CCPs used by US traders, which will cover broadly the same areas as the EC decision. There is also no agreement between the Securities and Exchange Commission, which regulates equity markets in the US, and the EC, although this is seen as less of a concern than securing equivalence between derivatives regulators.

WHO SEES THE BIG PICTURE? By Jannah Patchay, Director, Agora Global Consultants. We live in int ...

Divided we stand To begin with we would like to wish a happy New Year to all our readers. There ...