THE FUTURE OF TRADING IS NOW.

The catalyst for Plato Partnership 1, 2, 3 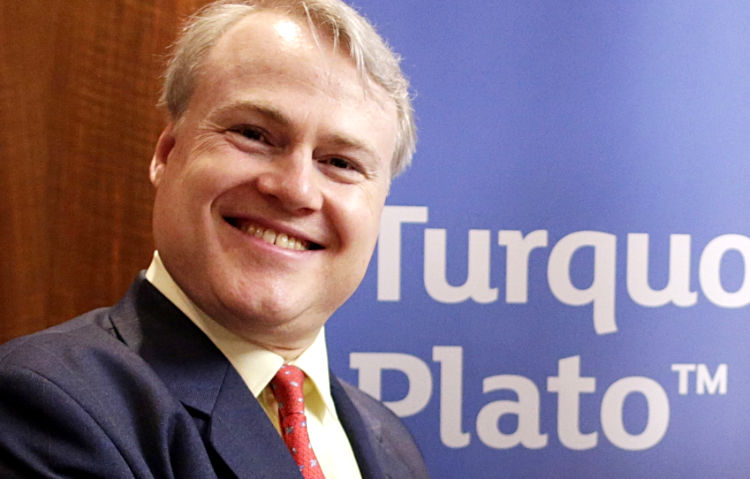 Asset managers, like AXA Investment Management4, 5, BlackRock6, 7, 8, Deutsche Asset Management9 (see page 14), Fidelity10, 11, and Norges Bank Investment Management12-17, have with increasing frequency published views about the role of exchanges in well-functioning markets and the need for innovation in electronic block trading. Their views among others, were heard at the FIX Trading Community’s 8th annual EMEA Conference in March 2016, which had nearly 900 delegates from 22 countries, comprising 23% buyside; 26% sellside; 28% vendors and 23% exchanges and others.

During an electronic vote23, attendees were asked “What one thing concerns you most in 2016?” 47% answered: “Everything to do with MiFID II”, followed by 17%: “The search for liquidity”. While more than half the audience (51%) answered “More Block Trading” when asked, “As a result of impending regulation, what do you expect in 2018?” (see Fig 1).

The prize is a Large In Scale electronic execution channel that works. We hear the buyside asking the sellside to provide access and return meaningful execution reports; from the sellside, the request is for the buyside to send larger parent orders via the sellside. Repeatedly buyside dealers have expressed their opinion of the importance of a trusted public exchange in the trading ecosystem to be accessed by institutions or any investor, the sellside continue to play a role.

Turquoise has been listening and innovating with customers, turning these ideas into actions24, 25. In fact, our Large In Scale electronic execution channel received 46% of the vote when the financial community was asked “Which order book innovations are you most using?” (See Fig. 1). 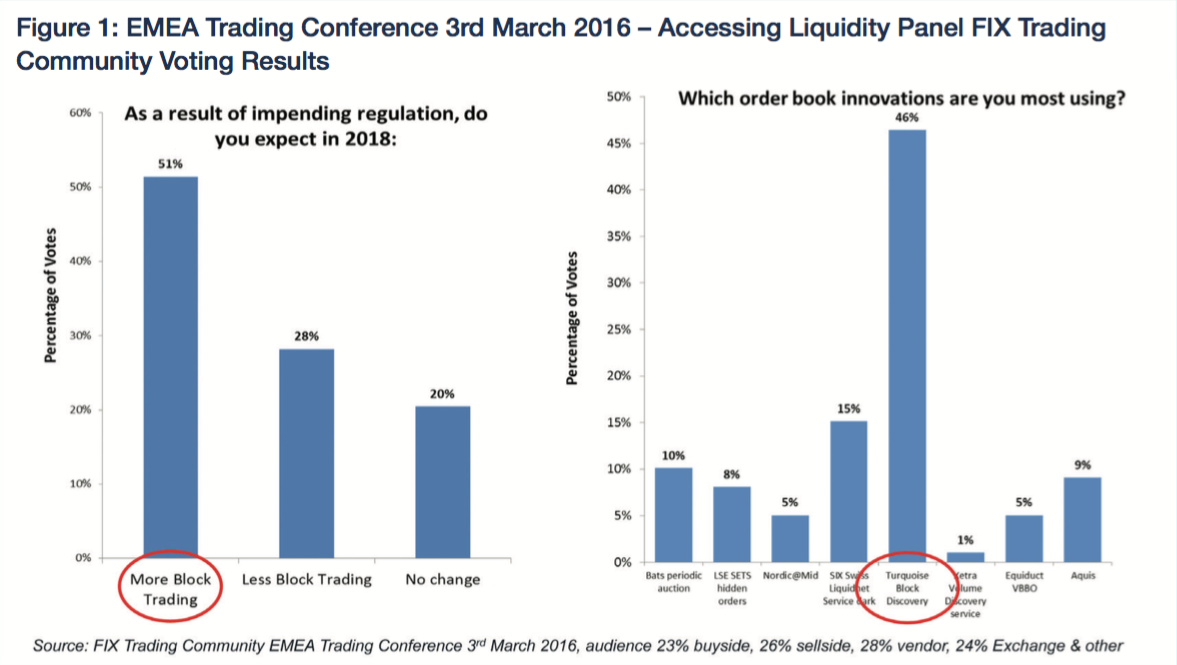 Empirical data through to the end of August 2016 shows that users of Turquoise Plato Block Discovery™ benefit from: 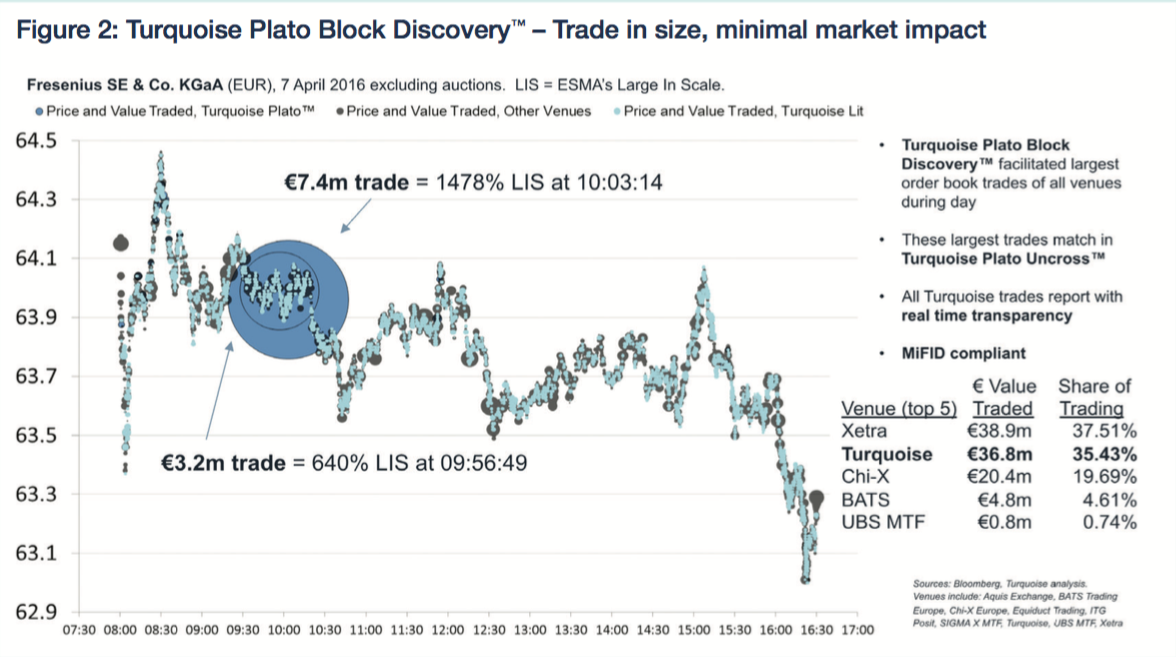 In the intraday chart enriched by trade size (see Fig. 2), investors are trading shares of the German company, Fresenius, on multiple trading platforms including Xetra – the electronic order book of its primary listing exchange, Deutsche Boerse – and Turquoise. This illustration shows the prices and sizes of trades by investors on 7 April 2016. Turquoise trade prices are similar to those of the primary Stock Exchange, while trade sizes serve both the smallest and largest orders through its single connection for straight through processing from trading in London to settlement into Germany. Turquoise not only enables investors to access more than 35% of the order book value traded that day, but it also matched the very largest order book trades of all venues that day via its award winning electronic block trading innovation Turquoise Plato Block Discovery™.

Key insights are that:

–  e.g. Turquoise Plato Block Discovery™ has ~50% activity greater than 100% Large In Scale thresholds; this compares with each of European continuous dark pools just ~1%; 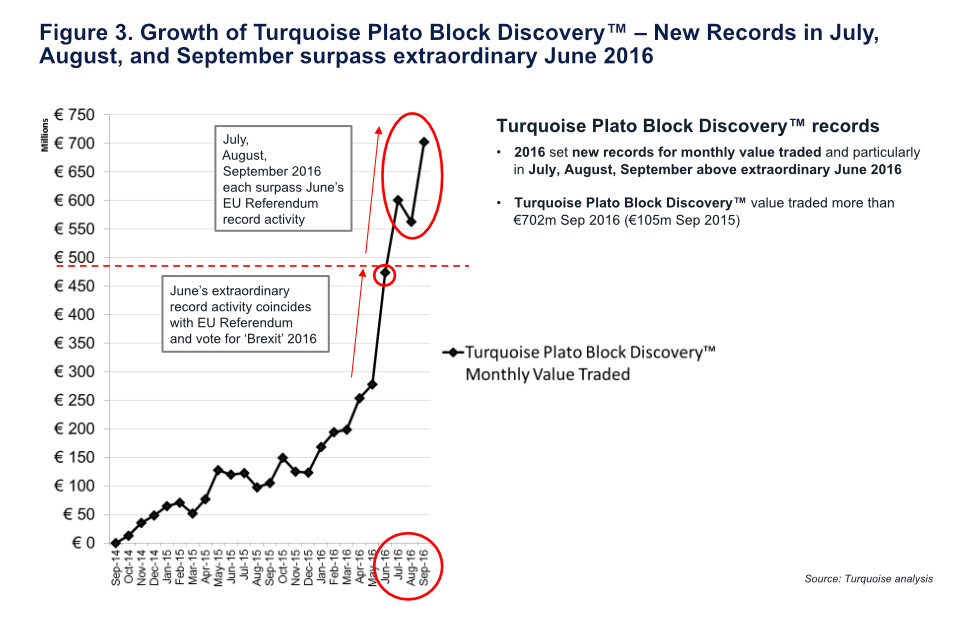 Surveillance of Turquoise activity, including monitoring of price movements ahead of Turquoise Plato Uncross™, is undertaken by the independent London Stock Exchange Group Surveillance team. Any suspected manipulation of Reference Price will be referred to the UK Securities Regulator, FCA.

A combination of robust automated reputational scoring, independent quantitative analysis evidencing empirical quality of the LIS trading mechanism, and an independent surveillance oversight add further to confidence in the integrity of Turquoise Plato Bock Discovery™ for the matching of undisclosed Block Indications that execute in Turquoise Plato Uncross™.

• Conventional order books tend to shrink trade size.18, 19
• Europe also faces impending regulatory change.20
• MiFID II’s ‘double volume cap’ calculations start January 2017 and will allow only order activity above Large In Scale thresholds to avoid the caps starting January 2018.21, 22
• Repeatedly Buy side dealers have expressed their opinion of the importance of a trusted public exchange in the trading ecosystem to be accessed by institutions or any investor, the Sell side continue to play a role.26, 27
• The requirement for the first time is for the Buy-side, Sell-side and trading venue to collaborate in a new way. Plato Partnership entered into a Cooperation Agreement with Turquoise28, 29 to explore this.
• Our response is Turquoise Plato™.30

[18] Even if a large order is on one side, if the other side is a small order that can match then the result is trade size smaller than the large order; or, if the large order has a Minimum Execution Size above that of the smaller order, there is no trade.

[20] FCA. “Firms will need to start planning for the MiFID II changes ahead of the finalisation of the EU implementing legislation and the subsequent changes that we and the PRA make to our Handbooks, and changes that HM Treasury makes to financial services legislation.” www.fca.org.uk/markets/mifid-ii

[21] European Commission. “A Directive and a Regulation extending the application date of MiFID II and MiFIR by one year have been published in the Official Journal of the European Union. The date of application will be 3 January 2018. The transposition of MiFID II into national laws has also been extended to 3 July 2017.” Updated rules for markets in financial instruments: MiFID 2, 30.06.2016. www.ec.europa.eu/finance/securities/isd/mifid2/index_en.htm

[25] “In less than 10 years from concept in 2006, Turquoise activity has grown from nothing to more than €1 trillion value traded in 2015 and achieved industry recognition for its innovations including Turquoise Uncross™ and Turquoise Block Discovery™ designed in cooperation with Turquoise buy side and sell side customers for quality electronic trading of larger sized investments. Turquoise won the Financial News 2015 Award for Excellence in Trading and Technology for Most Innovative Trading Product/Service for Turquoise Block Discovery™” in Barnes, R. “Turquoise” The Parliamentary Review 2016 [Issue: Finance Edition], September 2016, pages 33-35. www.theparliamentaryreview.co.uk/editions/pdfs/TPR2016-Finance.pdf

In troubled times – expanding our coverage

Dear Readers, There is no doubt that we are living through unprecedented times and unfortunatel ...

The UK’s Financial Conduct Authority has issued a temporary ban on the short-selling of 37 Belg ...