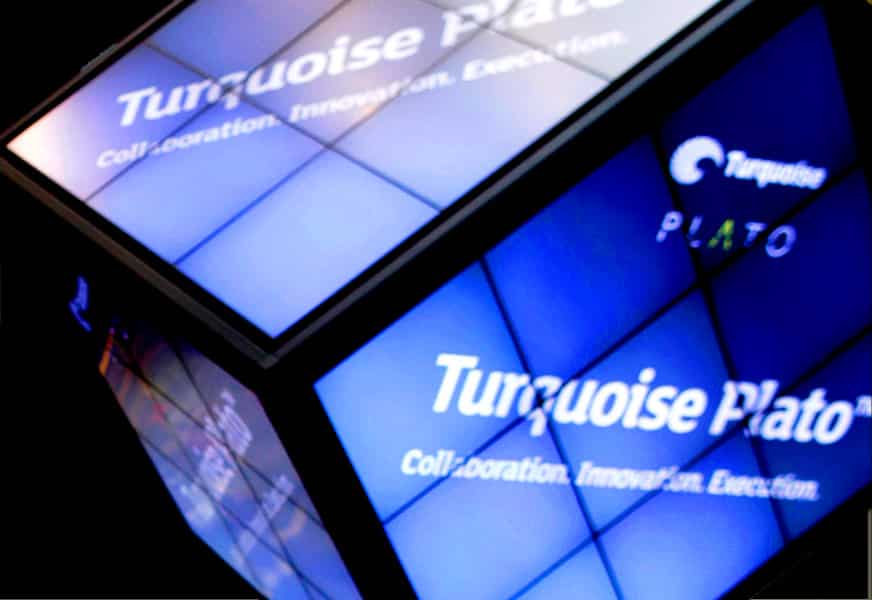 Turquoise Plato has been at the forefront of innovation which has held its users in good stead when equities were hit by Covid-19 fuelled turbulence in March and April 2020. The platform enabled them to seamlessly access liquidity and trade equities across the spectrum and geographies.

However, there have been several successes throughout 2020 with one of the most notable being the €1.42bn new daily trading record set by Turquoise Plato Block Discovery, a Large In Scale (LIS) electronic execution channel, on 9 November when markets soared on back of the news that that the coronavirus vaccine being developed by Pfizer and BioNTech was found to be 90% effective in preventing people from getting the virus (see Fig. 1). 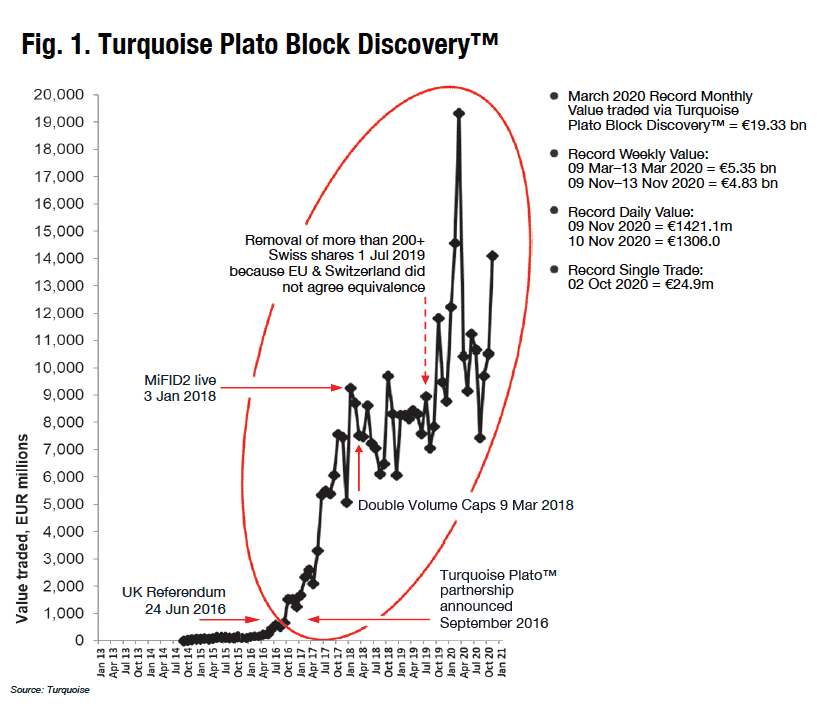 This figure was significantly higher than the previous record of €1.23bn on 9 March when US and UK stock markets suffered the worst trading day since the market crash in 2008. Equally as significant, the results demonstrated that the electronic block trading at midpoint inside the touch, had matured to become a mainstream market convention for institutional investors. It accounted for over half or 57.6% of all value matched in the Turquoise Plato order book as of November year-to-date (see Fig. 2). This is a dramatic increase from the 3% figure in 2016 when Plato Partnership, the not-for-profit industry group representing the buy- and sellside joined forces with pan-European MTF Turquoise. 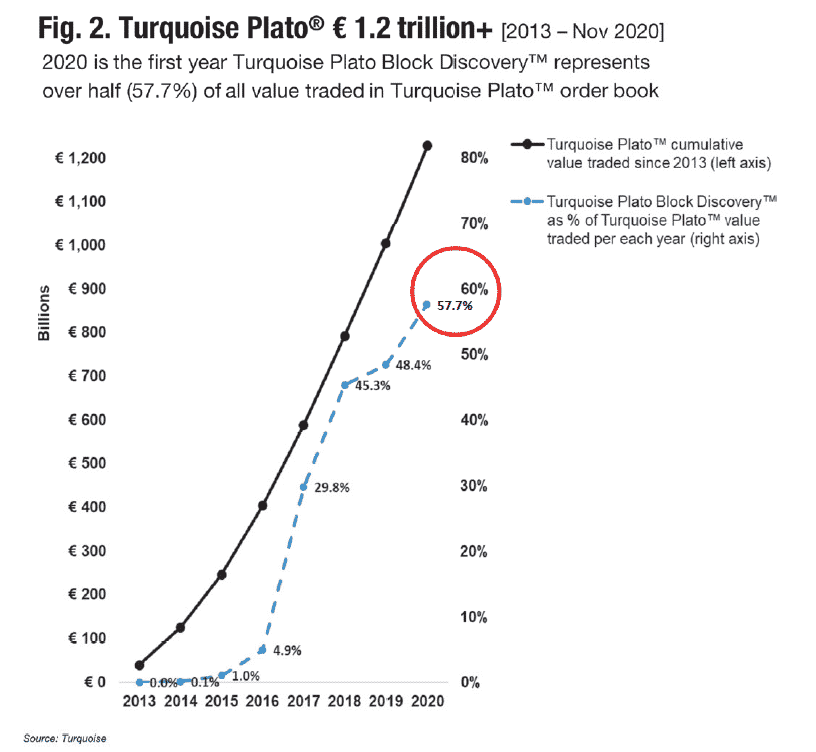 On a stock level, this translates into much greater morning liquidity for the larger caps but also for their smaller brethren. Take FTSE 100 stock the National Grid. On 8 June 2020, the stock was trading at £992,732 on Turquoise Plato Block Discovery Average Trade Size, which was a staggering 354 times the £2,807 Primary Market intraday Average Trade Size.

Meanwhile, on the other side of the spectrum, AIM Growth stock Boo Hoo Group had a similar experience with a £126,178 Turquoise Plato Lit Auctions Average Trade Size, 30 times more than the £4,234 Primary Market Intraday Average Trade Size.

Against this backdrop, it is no wonder that analysis by Rosenblatt Securities ranked Turquoise Plato Block Discovery as the number one single dark pool out of 21 venues for offering midpoint and electronic block trading as a single order book dark pool for matching UK and European equities (see Fig. 3). 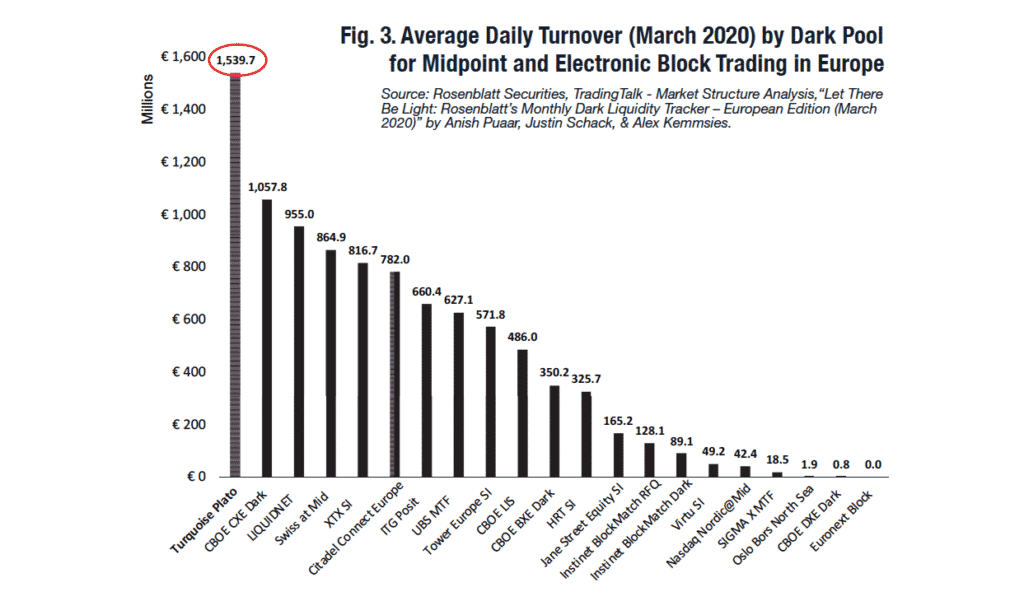 Although these figures represent impressive milestones, they are even more significant given markets this year have experienced unprecedented volatility due to the pandemic and its fallout. Global central banks have responded by pumping trillions into the system and many also cut interest rates to rock bottom levels which are likely to persist for the foreseeable future. Electronic block trading in particular was tested and proved its mettle helping investors navigate both turbulent as well as calmer markets. Moreover, investors were able to source liquidity, reduce implicit cost of execution and benefit from long term investment returns.

Turquoise Plato’s success can be attributed to ongoing innovation and the ability to work with its community to stay one step ahead of the market. When it was first launched its focus on simplicity stood out as it offers users one connection and rulebook for order book trading across the broad equity horizon. This ranged from blue, mid and small caps covering AIM, to exchange traded funds and products, and global depository receipts including Shanghai London Stock Connect.

Fast forward to today and despite the sophistication of its technology, the philosophy remains the same and is evident with the recent spate of protocols such as the Good for Auction (GFA) order for Turquoise Plato Lit Auctions and the Turquoise Plato Trade At Last mechanism that references the closing price – launched this year with the Turquoise Plato network. They are easy to use and understand but effective mechanisms for tapping into liquidity and achieving best execution.

For example, the GFA order type looks at the liquidity dynamic within periodic auctions or frequent batch auctions. When sent to Turquoise Plato Lit Auctions, a GFA order will either trigger a new auction event or join a live ongoing auction if it meets with suitable contra-liquidity. If it is not successful, then the order will be cancelled and immediately returned to the sender.

Turquoise Plato Trade At Last, on the other hand, is a complementary dynamic to the primary closing auction mechanisms. It offers traders an end-of-day matching phase using the primary market closing price as reference price, reflecting the importance of a robust closing price formation process. It gives traders the chance to look for opportunistic liquidity at a price that they already know without the need for risk management once that closing price has been established.

Although Covid-19 has dominated most of the year, the ramifications of Brexit also loom over UK and European markets. It is difficult to predict the impact of Brexit, but the London Stock Exchange Group (LSEG) is not leaving anything to chance and wants to ensure that it has a presence in the eurozone. It received approval from the Dutch regulator Autoriteit Financiële Markten (AFM) in the Netherlands to operate the Turquoise Europe MTF next year.

Turquoise Europe will complement the primary stock exchanges with multiple additional execution channels and unique liquidity. Members can expect the same high level of functionality, workflows and ability to interact to achieve consistently the best available result, the very definition of best execution.

At the time of writing, the UK and European Union had hammered out a trade deal just ahead of Christmas, but this did not include an EU-wide arrangement for financial services, with UK firms instead having to negotiate a patchwork of individual EU nations’ regulations. The UK Treasury is now tasked with negotiating a “memorandum of understanding” with the EU that will guide future regulatory co-operation on financial services, but equivalence is not expected to be on the table.