Green bonds achieved higher oversubscription and more aggressive spread compression in the primary market compared to vanilla equivalents in the second half of last year.

Climate Bonds Initiative analysed the most liquid 54 US dollar and Euro green bonds issued in the second half of last year, which had a combined face value of $62.5bn. The investor-focused not-for-profit group was able to build yield curves for 33 out of the 54 bonds in its sample and found that 26 priced with a “greenium”. This is the new issue premium, or  extra yield, for a new bond compared to where previous bonds from the same issuer are trading in the secondary market.

The report highlighted the launch of Germany’s sovereign green bond program which included a unique twin bond structure. The government issued a vanilla bond and then a green bond, sharing similar characteristics, within a short period.

Last June the German Finance Agency (DMO) issued a €5bn vanilla 10-year Bund and in September sold a €6.5bn green Bund sharing the same coupon and maturity as the previous vanilla bond but with a different use of proceeds. The proceeds of the ‘green twin’ would be used to fund transport; international cooperation; research, innovation, and awareness raising; energy and industry; and agriculture, forestry, natural landscapes, and biodiversity. The DMO issued another green twin last year November with a €5bn five-year sovereign bond or BOBL.

Caroline Harrison, Senior Research Analyst at Climate Bonds Initiative, said in a webinar last month that the twin structure enabled a valid comparison between the vanilla and green bonds. The green Bund priced with a greenium of one basis point lower than the vanilla twin and by the end of 2020 had maintained consistently lower yields.

She added that the green issue exhibited the lower volatility in the secondary market. As of 31st December 2020, the green Bund had exhibited lower price volatility than its vanilla twin on a ten, 30, 60, and 90-day basis.

“Now this is meaningful and something that, up until now, has been really hard for us to look at because we have not had exact comparisons available until this dream case study ,” Harrison added. “Investors may enjoy the benefits of a less volatile asset so that is an interesting finding that we will try to explore in further detail when we have the opportunity.” 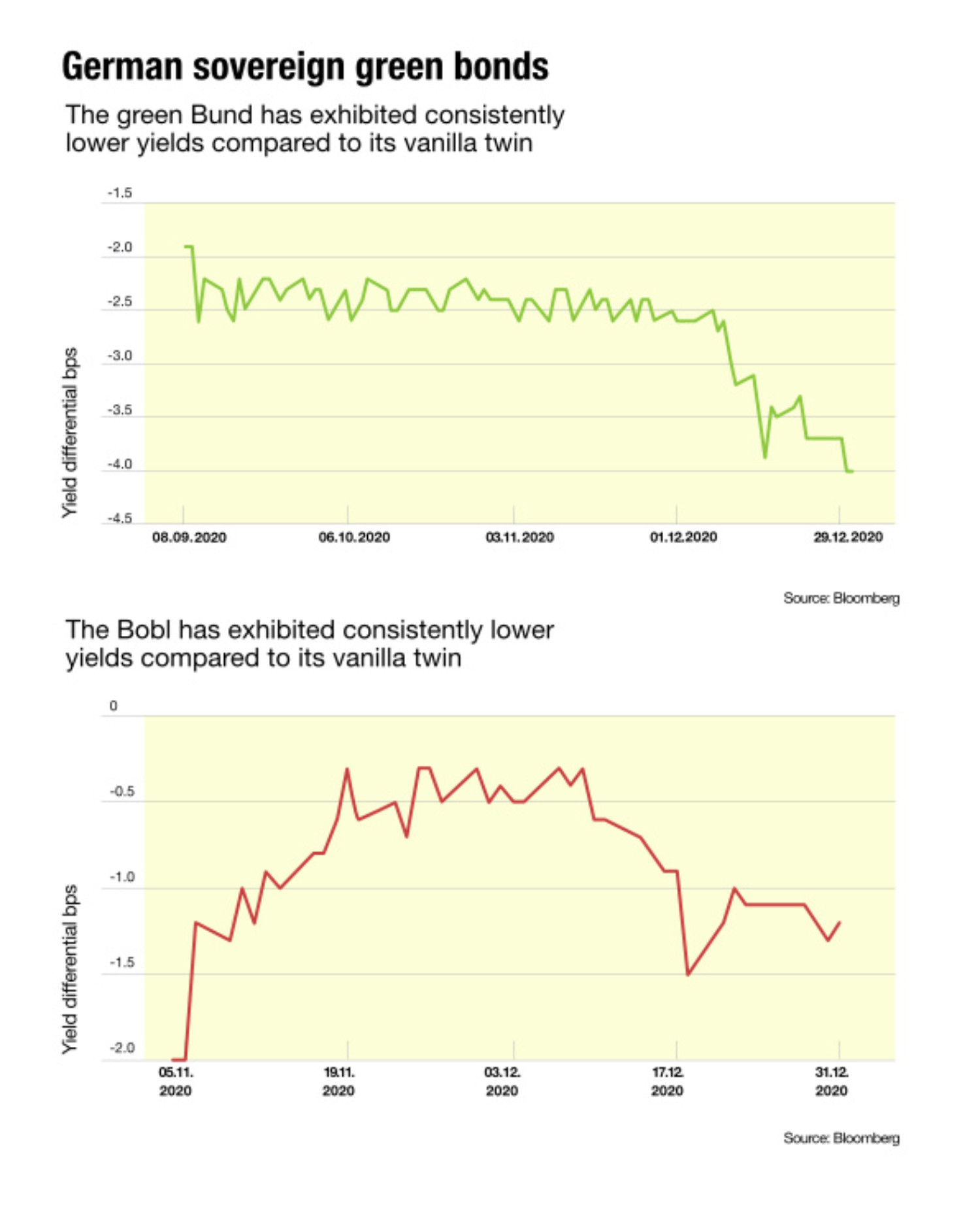 The report said the German issue showed governments around the world that green expenditure is relatively cheaper and showed investors they should commit more capital to green mandates. However, the tighter pricing also suggests that more supply of green bonds is needed from all sources.

Harrison said there was an increase in the number of dedicated green bond investors, who can help to squeeze the pricing and in Climate Bonds Initiative’s sample, 56% of bonds were allocated to green investors.

“We do hope that EU Sustainable Finance Disclosure Regulation is going to make it much easier for issuers to determine the percentage of their investor base that is actually green now that they will have a formal metric,” she added.

She concluded that anecdotal evidence is emerging that green bonds remained more tradable in the secondary market during the height of the COVID-19 pandemic.

“We had reports from investors that they were able to sell green bonds in the secondary market, even though the rest of the market was closed down, and that is something that we will be exploring in more detail, and hopefully publishing in our next paper,” said Harrison.

The Climate Bonds Database breached the $1 trillion milestone in early December last year. The non-for-profit has forecast that 2021 will produce a tenth consecutive green finance record with issuance of between $400bn and $450bn of green bonds. However, it also warned that the OECD has estimated that the required investment for green infrastructure alone is at least $6.3 trillion a year.

London at risk of losing fintech edge unless it acts now, according to Kalifa Review

The UK risks losing its dominance in financial services – unless the government backs one ...