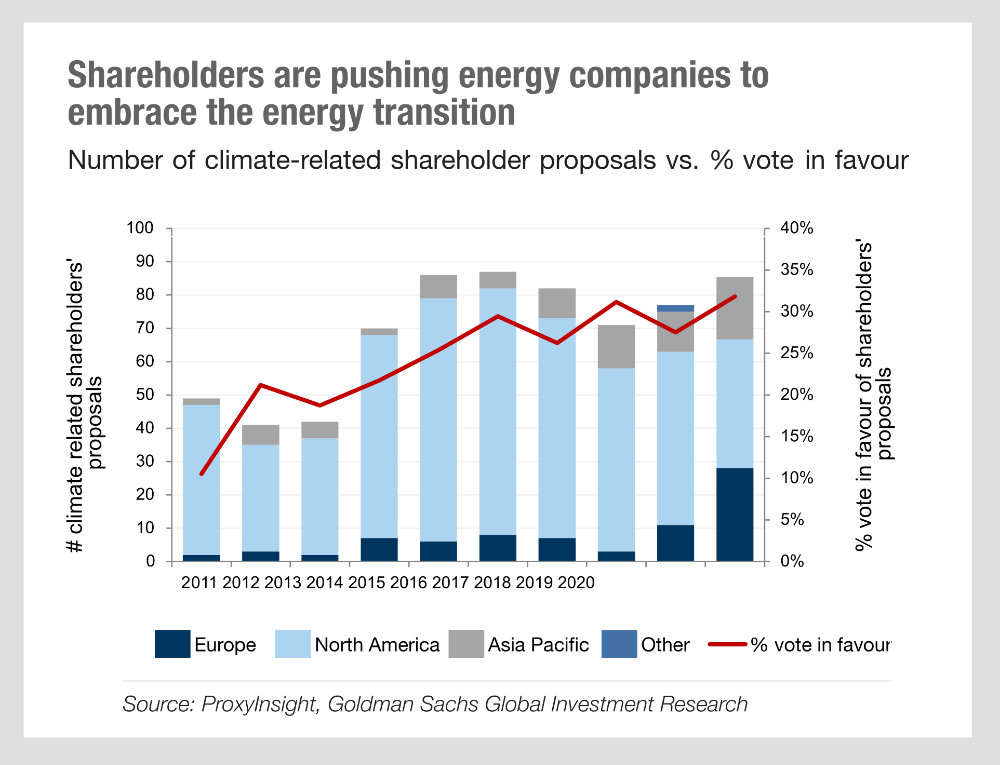 In a report, “Carbonomics: Five themes of progress for COP26”, Goldman Sachs said the rise of environmental, social and governance (ESG) investing is driving capital towards de-carbonisation which will be a major theme at the conference taking place in Glasgow COP26 is due to start in Glasgow, Scotland between October 31 and November 12.

In the report Goldman Sachs described how the forum could accelerate the de-carbonisation pledges laid out by COP21 (the Paris Agreement) in 2015.

For example, there are now more than 3,000 signatories to the UN PRI (Principles of Responsible Investment).  They represent more than $103 trn in global assets under management who are implementing ESG metrics as part of their investment process.

The number of climate-related shareholder proposals has almost doubled since 2011 and the percentage of investors voting in favour has tripled over the same period despite the outbreak of Covid 19 (see graph). Votes in favour have increased year-on-year and are currently 34%.

In addition, the number of companies mentioning and discussing the Sustainability Accounting Standards Board (SASB) has risen from 73 in 2016 to 268 as of June 2020 while the Task Force on Climate-Related Financial Disclosures’ (TCFD’s) adoption has accelerated from 12 company mentions in 2016 to over 515 as of June 2020 according to the bank’s analysis of public filing for global S&P 1,200 companies.

Goldman Sachs said, “This investor pressure, however, is not uniformly distributed across sectors and shows a clear bias towards energy producers versus energy consumers, with data since 2014 showing 50% of proposals targeting energy producers (oil & gas, utilities) while only 30% target the sectors that account for most of the final energy consumption.”

As a result, the spread in the cost of capital of hydrocarbon versus renewable developments has widened by more than 10% over the last five years, equivalent to a global carbon tax of $80/ton.

“This is driving a historical turning point in energy investment, with global renewable power spend overtaking oil & gas developments for the first time in history.”

Lazard has launched its Climate Centre to provide rigorous, data-driven insights on the financi ...

With COP 26 underway, the International Organisation of Securities Commissions (IOSCO) is calli ...