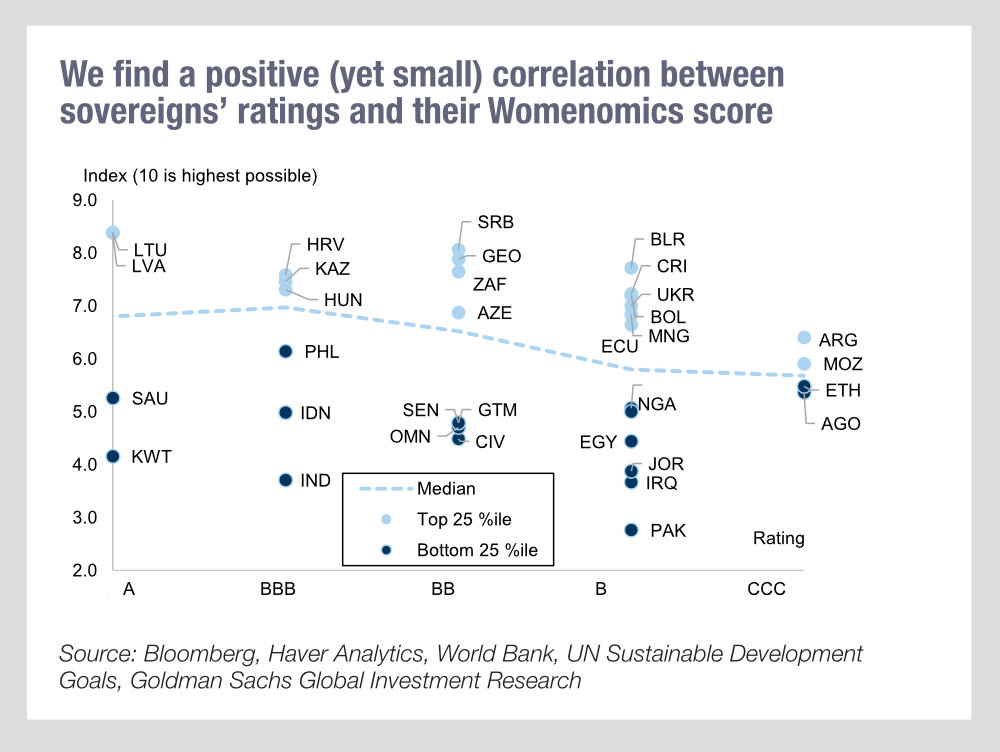 Emerging market US dollar sovereign bonds that have a better score on Goldman Sachs’ Womenomics Index generally have higher ratings and tighter spreads according to research from the bank.

Goldman Sachs has constructed a Womenomics Index across 72 emerging market sovereigns in the credit universe which measures the role of women in the economy based on five factors: education, labour, agency, women in power and health.

“Sovereigns that score higher on gender equality tend to have higher ratings and tighter spreads”, said the report. “Consistent with this, investing based on gender equality in EM sovereigns would have yielded some outperformance over time, led by protection during drawdowns.”

The correlation with ratings is positive but relatively small at 33%. The median A-rated sovereign Womenomics Index is 6.80, while the median B-rated credit is 5.65 (see graph).

Goldman concluded that the index captures a dimension of ‘quality’ that is not easily picked up in conventional ratings, and can provide greater resilience to portfolios against shocks and drawdowns.Health and education showed the strongest ‘flight-to-quality.’

The study said: “Labour and women in power have no significant correlation with sovereign ratings, and suggests that focusing on various aspects of gender equality within the sovereign investment space can offer some diversification of risks within the portfolio as well.”

Goldman Sachs said that within emerging markets, the Middle East often lags other regions. The Middle East has a relatively low share of female-to-male labour force participation and women in parliament, and few laws in place to protect women’s rights. In contrast, emerging Europe has the most equal outcomes for women, driven by the number of laws which protect women’s rights and better health and education outcomes.

There has been a significant increase in companies discussing environmental, social and governance factors...
Read more

Stocks considered as “more ESG” or environmental, social and governance have been persistently more...
Read more

There has been a significant increase in companies discussing environmental, social and governance factors...
Read more

Stocks considered as “more ESG” or environmental, social and governance have been persistently more...
Read more
SustainabilityESG-Data
Previous articleESG assets to reach $30 Trillion by 2030
Next articleCapital market players need to invest in the cloud to stay sharp