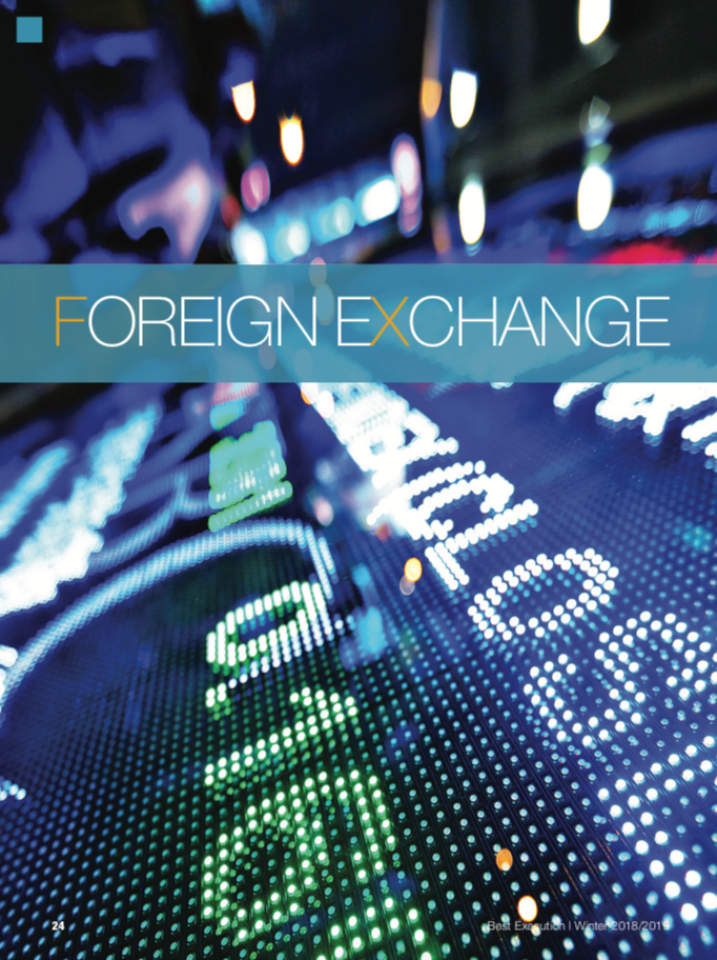 THE UNDERCURRENTS IN FX MARKETS.

The winds of change have certainly blown over the FX markets this past year. Interest rate policies diverged, trade wars erupted and Europe’s long and winding quantitative easing programme finally wound down. This is not even mentioning MiFID II, Brexit and the myriad of geopolitical tensions swirling above. The reverberations are expected to continue into 2019 which could spell a bearish picture for FX.

The ING 2019 FX outlook report (entitled ‘Peak Dollar‘) forecasts a negative dollar narrative to develop as US rates come off the boil by the end of the year and a subsequent slowdown in the economy that could impact the rest of the world. The forecast for Europe is no brighter. Although sluggish growth has been blamed on a relentless stream of ‘one-off factors’ last year it is hard to see a significant pick-up in activity in 2019. The European Central Bank is not expected to raise rates in any meaningful way and the European Parliament elections in May will divert attention.

The report sees a more mixed picture for emerging markets. A weaker dollar would be a boost but they would take a hit by declining world trade volumes and rising late cycle volatility. However, a great deal of the bad news has already been priced in and if these markets can survive the first half, modest rallies should be seen later in the year.

As for the nuts and bolts of trading, there are two pronounced trends, according to James Wood-Collins, CEO of Record Currency Management. “We are seeing more price determination from non-bank market makers and we are moving away from a world where forwards are being set by mechanical rate differentials,” he adds. “The close lock between markets has been broken.”

Non-bank participants such as US based Citadel Securities and London based XTX Markets first made their debut about five years ago and have been gaining ground ever since by competing on price and speed. Figures from consultancy Aite show that average daily non-bank trading volumes in the spot market rose to $575bn last year, up from $200bn in 2015. The Boston-based consulting firm projects that it could hit the $675bn mark in 2018 based on broader forex trading volume growth.

A separate study by Euromoney also depicts the non-traditional players making bigger inroads. They nabbed six of the top 50 places on its 2018 FX Survey, an annual ranking of market-makers in currencies. XTX more than doubled its market share to 7.3%, making it the third-biggest player behind JP Morgan and UBS. The US and Swiss banks, along with Citi and HSBC, have maintained a tight hold on the market that will be difficult to break. Over the years, they have built global franchises with integrated risk management, price discovery and execution tools that enable them to manage client flow effectively and cater to a wide range of trading strategies and order types.

By contrast, many of their larger regional and medium sized contemporaries do not have the deep pockets to make the required investments in the post financial crisis era. More stringent regulation such as Basel III capital requirements has caused an aversion to taking too much risk on their balance sheets.

The other ongoing theme which is evident in other asset classes is that traditional voice traders are increasingly being usurped by their electronic counterparts. Although the FX market is still mainly OTC, with only a small percentage being cleared and exchange-traded, there has been a plethora of venues coming to the market offering a variety of routes to trade. 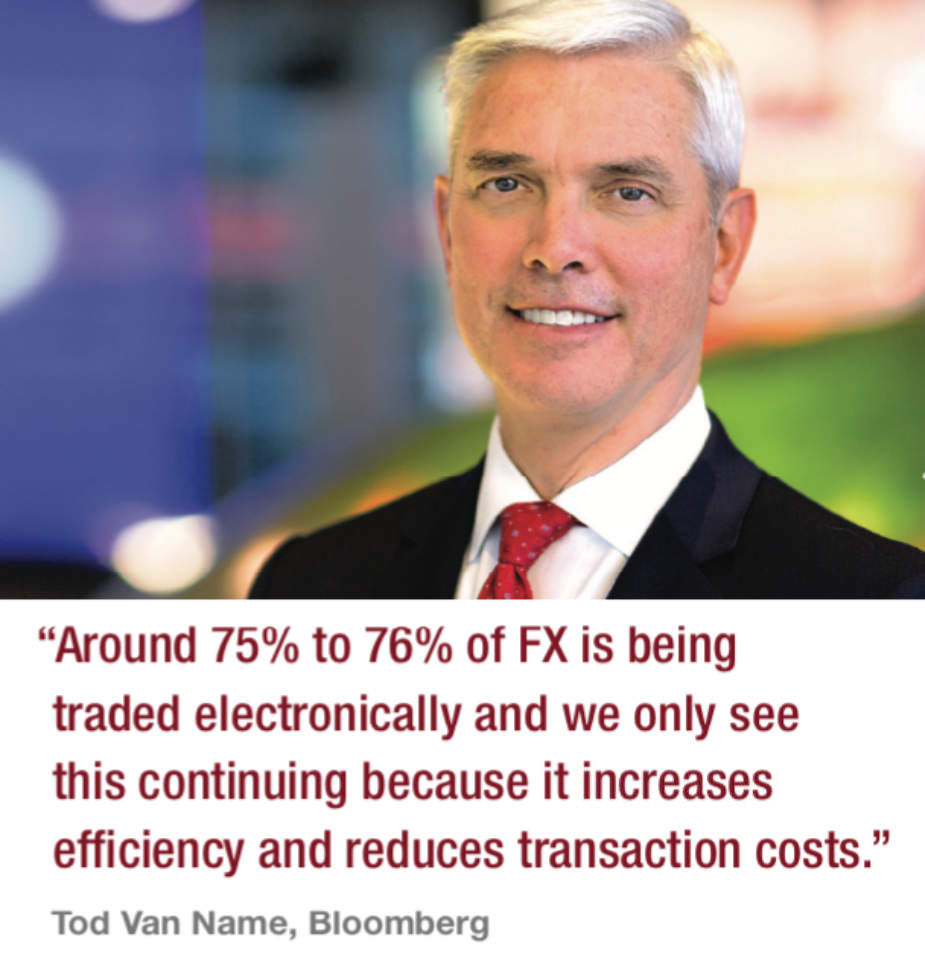 “Around 75% to 76% of FX is being traded electronically and we only see this continuing because it increases efficiency and reduces transaction costs,” says Tod Van Name, Bloomberg’s global head of foreign exchange electronic trading. “It is mainly in the spot market but I see it spreading to other FX instruments going forward. We also think MiFID II has been a driver in pushing more buyside firms to trade electronically because they now have to substantiate where and how they trade and whether they have achieved the best price.”

Although buyside firms are turning to e-trading, hedge funds, particularly in the US, have been the most active on a volume weighted-basis. Globally, they increased their share to 82% in 2017, up from 64% the year before, according to Ken Monahan, a senior analyst on market structure and technology at Greenwich Associates and author of a study on e-FX. At the same time, they reduced their usage of single-dealer platforms by a more than half, from 13% to 5%.

As with any industry the forces of competition have been blowing and there has already been a wave of mergers over the past three years with platforms such as Hotspot and 360T being bought by Bats Global Markets (which is now part of the Cboe) and Deutsche Börse respectively. Many in the industry are predicting more consolidation. Innovation and cutting-edge technology will be the key differentiators, but this requires scale. 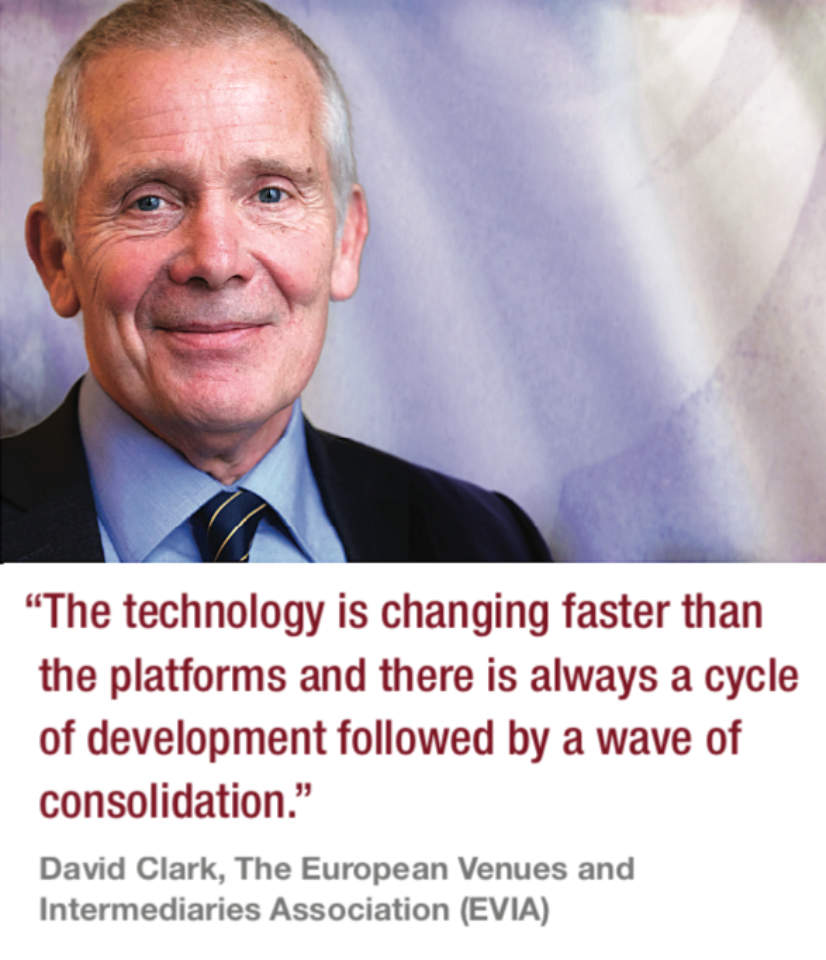 “The technology is changing faster than the platforms and there is always a cycle of development followed by a wave of consolidation,” says David Clark, chairman of The European Venues and Intermediaries Association (EVIA). “This will only continue because the major objective of these platforms is to build a better service. “

The same philosophy applies to the development of algos and transaction cost analysis tools. Research from Greenwich Associates shows the use of algorithmic execution in FX is in its early days. Only 10% of firms in FX employ algos versus 50% in equities – but that number is growing. “In many ways, FX is getting closer to equities in terms of fragmentation of participants and liquidity, says Vikas Srivastava, the chief revenue officer of Integral. “Algos and smart order routers for spot trades were at the genesis, but that is changing and we are seeing greater innovation across the spectrum – spot, forwards and non-deliverable forwards.” 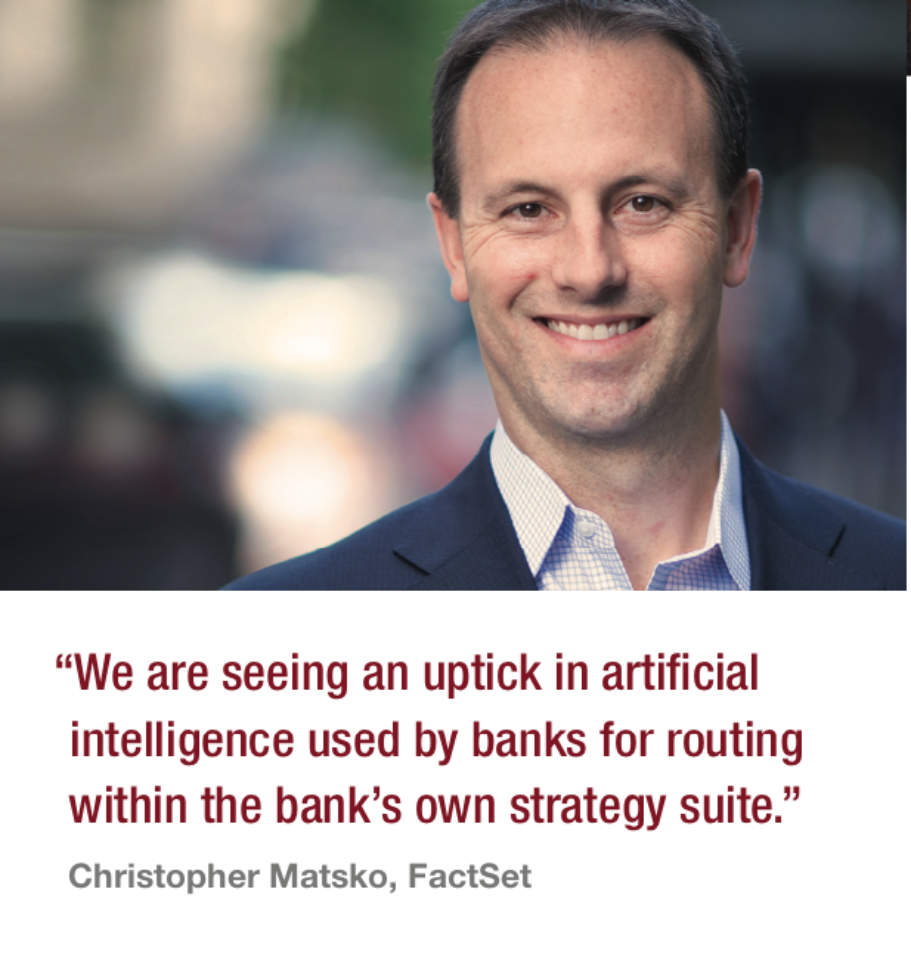 Christopher Matsko, head of FX Trading Services at FactSet, also believes there will be more progress on the algo front. “We are seeing an uptick in artificial intelligence used by banks for routing within the bank’s own strategy suite,” he adds. The question is, how can a platform provide a holistic view of the market when it is fragmented and complicated. The objective is to empower traders with useful, actionable data points such that their trading decisions are more informed and thus more strategically executed within the market.”

There is also a great deal of work on automating the back and middle office functions. Blockchain is expected to play an important role but at the moment there is more talk and pilot programmes than actual solutions. The decision by CLS, a key settlement house, to water down a two-year blockchain project amid security concerns raised by the world’s main FX dealers is a reflection of the challenges.

Alan Marquard, chief strategy and development officer, CLS, believes the technology “has the potential to significantly improve efficiencies and reduce operational risk in the FX market if applied to certain post-trade processes. Our focus is on delivering market-wide solutions through open-source initiatives and industry consortia. This will ensure DLT-based platforms and applications are effective, interoperable and suitable for the broadest range of financial market participants.”

However, he adds that “new technologies like DLT will only transform the market when they are deployed to solve real business problems. That requires a deep understanding of business processes and platforms and for activities currently undertaken by FMIs (Financial Market Infrastructures), the right levels of oversight, governance, credibility and trust.”

On the regulatory front, the key initiative of the last 18 months has been the FX Global Code of Conduct, a voluntary set of principles launched in May 2017 to restore trust and curb bad behaviour in the wholesale foreign exchange market. Views are divided on whether it will have the intended impact on behaviour, and currently, sellside firms have signed on but their buyside colleagues have been slow in their adoption. “The Code is one of the topics that has triggered a lot of comment,” says Wood-Collins. “To me, the challenge with regulation and the Code is having to collect, store and report on the different areas in the business. They shine a brighter light on every aspect of the market and it becomes clear who is doing the right things and who isn’t.”