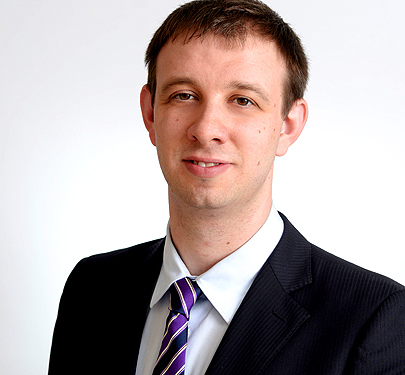 Earlier in the year, GreySpark Partners released Trends in FX Trading 2014, a report examining the impact of both buyside and sellside e-trading and e-commerce dynamics on the structure of trading in the FX market which found that a long-running trend of product consolidation in the FX options instrument class could be the forbearer of a more electronic future for hedging tools.

In 2014, many market structure experts on both the buyside and sellside of the FX market believed that the increasing sophistication of electronic currencies’ liquidity production and consumption platforms are priming liquidity in the space overall, for rebirth in the near future as an equitieslike, all-to-all (A2A) market. The report found some evidence of an emerging trend within FX toward a sophisticated, A2A market structure model.

However, the A2A look and feel in 2014 of the so-called flow FX space – which includes spot, forwards/outrights or swaps – from both the buyside and the sellside’s perspective can be deceptive, according to our report. In fact, when an A2A lens is applied to the FX options universe, specifically, evidence of convergence between e-trading technology, e-commerce business models and electronically-executed trades is hard to find.

This does not mean though that the electronic future of FX options trading is not a rosy one – far from it. Rather, if history is any indicator, then our analysis of the FX options product class suggests that it is only a matter of time before the right amount of market demand for e-traded FX options products will meet the ability of sellside broker-dealers to provide electronic liquidity, and the market will move into a more A2A state, akin to the current status of instruments traded in the flow FX family.

The report argues that participants in the FX options space won’t know how and where that space is heading from an e-trading, e-commerce market structure perspective until it knows precisely where it wants to go. And to understand where they want to go as new technology and liquidity dealing paradigms for buyside and sellside traders alike evolve out to 2016 and beyond, the FX options space need look no further than the lessons that can be learned from the electronification of flow FX.

Specifically, in the 1990s, the nature of flow FX liquidity began to slowly gravitate away from being consistently warehoused on sellside brokerdealer balance sheets toward – instead – a more cost-efficient, speedier, brokered state in which investment banks abandoned long-standing principal dealing models for the adoption of inherently more electronic agency dealing models. As such, our chief findings, in terms of the state of e-trading and e-commerce in the flow FX space in 2014, are as follows:

DMA into spot FX D2D venues, as a competitive differentiator between one bank and the next in terms of ability to service buyside client liquidity demand, is only matched by the ability of a larger sample of banks to provide FIX or API connectivity for their clients into traditionally bank-only venues.

Advances in technology enabled this change – specifically, the launching in recent years of prime brokerage (PB) technology platforms, by many of the leading FX ECNs, enabled banks to enable their buyside clients to gain largely unfettered access to sellside spot FX liquidity in ways that allow the clients to trade on prices in the bank’s name.

Granting buyside clients access to spot FX D2D venues has essentially allowed buyside firms to directly exchange liquidity flows with one another, albeit within electronic trading environments wherein the regulation of trading activity remains managed – in a fashion – by the banks making markets and the inter-dealer brokers hosting the trading.

Far from being concerned about the presence in 2014 of algorithmic or high-frequency hedge funds within the hallowed ground of D2D spot FX venues, many of the leading brokerdealers are now encouraging their presence on venues like ParFX because, quite simply, what’s good for the little clients in terms of PB access to spot FX liquidity is even better for the large clients.

According to our analysis of the spot FX market, the level of buyside-to-buyside spot FX trading within D2D venues began to increase dramatically in 2008, when PB technology platforms operated by interdealer venues became more commonplace. For example, the report found that the leading ten non-bank participants by volume on EBS Market make up approximately 25% to 30% of the total average daily spot FX volume on the platform, which is around 75% of the overall nonbank average daily volume on the venue.

The remaining 25% of nonbank average daily spot FX volumes on EBS Market are made up of around 50 buyside firms that interact with other market participants on the platform using a variety of lowvolume trading models. The ten leading non-bank participants on EBS Market by volume utilise PB relationships with broker-dealers to gain access to the platform. Many of these non-bank participants are hedge funds and other types of proprietary trading firms that operate multiple trading models on EBS Market, many of which would commonly be described as high-frequency.

In this way then, the spot FX market is transitioning into an agency-only dealing model environment defined by a multitude of e-only products from which only a handful trade in any significant amount of volume on a daily basis, and on venues controlled by only the largest market participants on either side of the supply and demand equation. However – for the spot FX market to reach such a point – both the consumers and providers of liquidity spent several decades working toward not only a level of agreement on which currency pairs can and should trade in high volume on a daily basis, but also how that liquidity can and should be provisioned to the market.

The fact that advances in e-trading systems and accompanying e-commerce business models were the catalyst for a shift toward A2A trading to occur is almost inconsequential when compared to the ceaseless amount of whittling-down required by parties globally on all sides of the market to come to a collective agreement as to how liquidity should be provisioned. The result is that banks can now increasingly lean on their ability to grant buyside access to spot FX liquidity almost as if it were a simple service provision.

GreySpark believes that the market structure changes witnessed in recent years in the spot FX space will set the stage for greater levels of e-trading in other types of currencies instruments, such as FX options. For the time being, however, FX options will remain principallytraded by banks, with multidealer platforms remaining the venues of choice for calls and puts liquidity.

If the sellside principal trading of FX options is to become more electronic – and thus, agency-like – in the future, then it will happen as a result of broker-dealer attempts to offer innovative means of accessing FX options liquidity through single-dealer platforms (SDP), either by bolting on a third-party technology vendor solution to the platform or by building out specific dealing capacity using in-house expertise.

The most common route to market for these SDP innovations is through dynamic pricing, wherein the ability of large flow houses to combine retail FX flow with the rest of the bank’s primary currencies’ liquidity to skew pricing for FX options products represents the most successful model in the marketplace.

These price-skewing models gave some of the broker-dealers surveyed for Trends in FX Trading 2014 report the ability to standardise a wide range of vanilla FX options products ranging from the very-vanilla to more complex contracts that were commoditised over time as their geographical reach to buyside client bases increased. 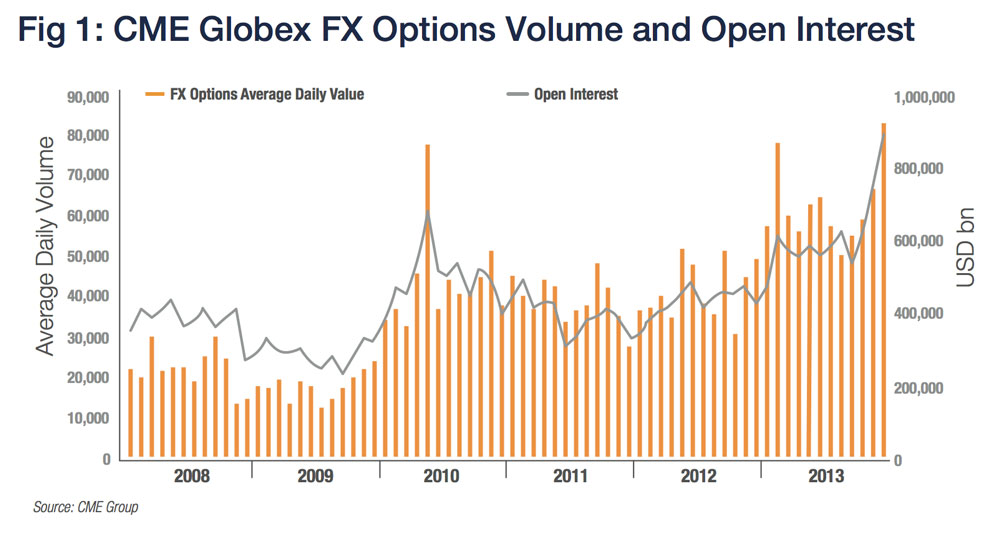 On the surface, the alignment of demand and supply for the contracts traded on the leading electronic venue for standardised, vanilla FX options instruments can be interpreted as appetite by market participants to gravitate toward an EU- and US-regulated entity – CME Globex is registered with the CFTC as a SEF – to automate the hedging of risk exposure in the primary FX market.

However, another argument could be made suggesting that the products traded in volume on CME Globex were standardised by broker-dealers so that they could be more easily dealt electronically rather than via voice OTC.

This is not to say though that non-vanilla FX options are ripe for standardisation as well; we believe that there will always be a distinct class of FX options products – crosscurrency swaps or dual-currency deposits, for example – that all broker-dealers must voice price and which can only be dealt and processed OTC.

Nevertheless, potential exists in the future for broker-dealers to co-opt the characteristics of some emerging D2C FX options trading venue offerings into their SDP architecture, offering buyside clients specific capabilities to structure and test the viability of complex or exotic FX options contracts using advanced pre-trade analytics accessed within an SDP. But, for the time being, the sellside FX options dealing space and the market structures surrounding it remain within a transitionary phase.