Andreas König, Head of Global FX at Amundi Asset Management, assesses how FX markets are responding to the unwinding of QE, regulatory and technological forces.

Andreas König worked as Head of Foreign Exchange at Amundi’s office in Munich, where he was responsible for all matters concerning FX. He relocated to Amundi’s Dublin office in November 2007 and is now responsible for Global FX in London within the Global Fixed Income team. Before joining the company in August 2000 he was employed by Commerzbank London as Deputy Head of Global Foreign Exchange Options. Prior to that he worked in the Frankfurt branch of Commerzbank as Head of currency options (1996-1998). König is a graduate in Business Administration from the University of Applied Sciences, Landshut. He has been a CFA charter holder since 2003.

What impact has the changing macro-economic landscape had on the FX markets?

There have been significant changes on the macro-economic landscape and also important long term structural changes. After the financial crisis, central banks reactions were influencing the markets with quantitative easing, decreasing interest rates and lower volatility. However, we are seeing changes in the cycle with the Federal Reserve’s interest rate hikes. Financial conditions are tightening, inflation is slightly higher and currencies have been impacted especially in emerging markets. Liquidity or capital is flowing to where yield looks attractive compared to risk, which at the moment is the US dollar which is also the reserve currency.

Almost a year on from MiFID II – how has it changed the FX markets?

As a FX Portfolio Manager I mainly look at FX from an investment point of view, but in general regulation has changed the landscape. It is always done with good intentions such as to improve the fairness and transparency, however, there are also the side effects. What we have seen with regulation is that it has changed the risk behaviour of investors and market makers. There is almost no proprietary trading anymore because taking risk on their balance sheets became more restricted and more expensive. This influenced liquidity and has caused at times greater volatility as liquidity has become more erratic. This is not so much a concern in FX because it is still a very liquid market but sometimes there are also pockets of liquidity and then they disappear so you have to be aware of this trend and take care when trading.

What has been the development of electronic trading in FX?

There has been a strong development towards electronic trading in recent years and I would say that 90% of the time the trading is faster and there are better results. However, the issue is with the 10%. When there are extraordinary events or shocks, machines might get switched off and then there is no liquidity. One of the problems today is that there are not that many old school traders left. This is not a problem until there is one of these extraordinary events. Then you need people who not only have a good understanding of the market conditions and influences but can also react quickly in terms of execution, market making and risk taking. This is why firms need to be prepared for this type of volatility. 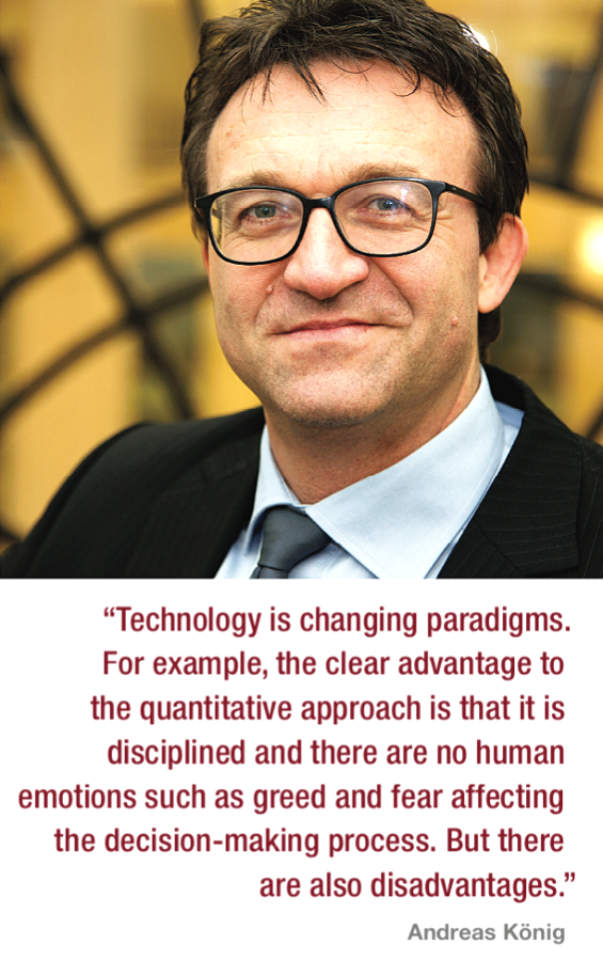 How has technology in general changed the trading and execution?

There is a lot of talk about AI and machine learning but where are and can they be applied.

Technology is changing paradigms. For example, the clear advantage to the quantitative approach is that it is disciplined and there are no human emotions such as greed and fear affecting the decision-making process. But there are also disadvantages.

On the execution side, technology can quickly source the liquidity without impacting the market. At Amundi we are using discretionary as well as quantitative techniques and try to combine the strengths and advantages of both approaches. At the end we are fundamentally macro driven.

AI can be used in different aspects but it is not yet impacting FX investing in the traditional sense. There are always opportunities and it will be applied in different forms in execution and in investment. It is a topic for the future but in the short term, the traditional discretionary and quant strategies will remain the norm.

What role do you see technology playing?

Development in technology and electronic trading in FX is here to stay. When I am asked what makes you have sleepless nights, it could be some sort of liquidity disruptions in case of a shock or because everyone is going down the same route and pressing the same buttons. While the developments in technology are valuable, we should not underestimate the need of humans in difficult times in order to survive. I think there is underinvestment in human ability and that we need to look at both, people and technology.

There is a lot of discussion about FX as an asset class. What are your views?

This question is certainly not new and yet it is still not answered once and for all. FX is difficult to categorise as there is no direct yield or dividend, no appropriate benchmark and no beta in the market. It is about trading currency pairs – one against the other and FX is a way in which we denominate other asset classes.

However, I think it can be seen as an asset class. FX does not have the theoretical expected return as equities and fixed income but you have something that goes up and down independently and if you can isolate the movements then you can extract yield.

What impact has the global code of conduct had?

The idea behind the Code of Conduct is not completely new in that we always had a code in terms of the market behaviour of the FX investor. This is why I would say that the Code has not had a huge new impact on day to day behaviour. However, we are in favour of greater transparency fairness and a level playing field. We do believe it is important to have everyone playing by the same rules.

What role can cryptocurrencies play in the FX world?

There are divided camps about cryptocurrencies. One issue is that they are always mentioned together with the blockchain technology although I think it is two separate topics. To me as a currency investor, they do not have a role to play in FX yet. It may change in the future but for now I do not look at them in my daily work. They are influenced by different factors and behave very differently to the traditional currencies we invest in. However, I am open to them but we have a long way to go before they become an investable asset. At the moment it is still a niche and there needs to be a greater understanding as well as better security and credible regulation before it gets more widely accepted.