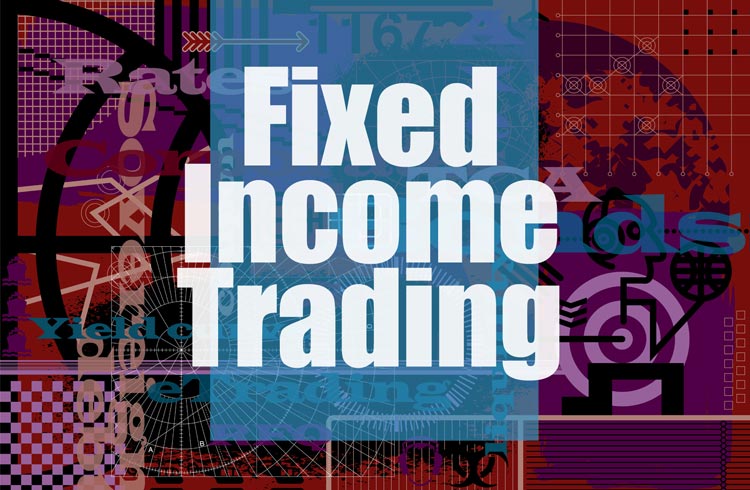 Liquidity in high quality bond markets has taken a severe downturn, increasing cost and risk for fixed income traders. Dan Barnes looks at why structural reform may be needed.

Despite booming secondary market volumes, buyside traders are reporting a fall in liquidity of up to 80% in markets which have been more liquid than most. That has considerably reduced capacity to match large-in-size trades, and increased the need for buyside traders to work orders.

Marc Harrington, head of fixed income trading at F&C Asset Management, European hub of BMO Global Asset Management, which has £166 billion assets under management, says, “In investment grade, pre-crash we used to get bids and offers all day in £10m a side. Now that is more like £2m to £3m a side. You can still get £5m or more done, but typically you can [match] half an order and then you have to work the other half. For high yield orders there has been a reduction on liquidity for anything above £1m.”

This illiquidity stands in marked contrast to volume. Trading in US credit reached nearly $27trn in 2014 up from $14trn in 2008, according to data from the Trade Reporting and Compliance Engine (TRACE). Between 2005 and 2015, annual volumes for gilts have more than doubled to reach approximately $11trn annually, and US treasuries have bounced around the $25trn to $32trn range over the same period – with the exception of a dip between late 2009 and early 2010, according to a recent analyst report from dealer Citi.

A missing link between high volume and low liquidity was identified by Matt King, global head of credit products strategy at Citi in his May 2015 note, ‘The Liquidity Paradox – The more liquidity central banks add, the less there is in markets’. 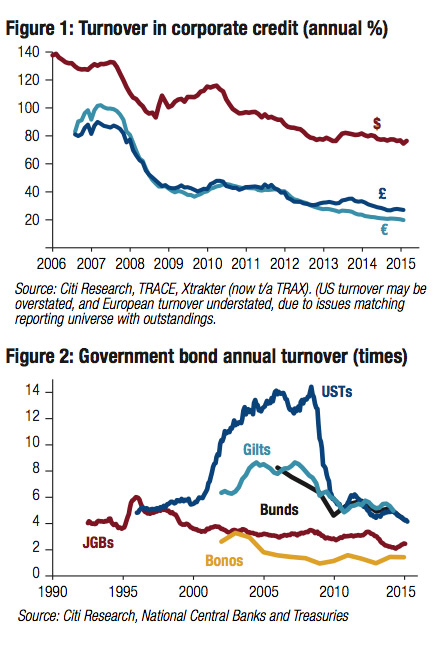 He observed that the rates and credit markets have seen a massive post-crisis decline in turnover (see Figures 1 & 2), undermining the rosy liquidity picture painted by high trading volumes. He asserts that the environment reflects buyside firms who largely buy or sell in the same direction, high-frequency traders in the more liquid markets trading in the prevailing direction as well as central banks that are buying up assets and reducing the heterogeneity of the markets. Traditional sellside participation – which traded in the opposite direction to its buyside clients – has fallen away.

Corporate bond markets have a high number of debt instruments, issued by many firms, which multiplies the challenge of matching buy and sell orders, although illiquidity is now found across debt markets. David Blake, director of international fixed income at Northern Trust, which has $960bn in assets under management, says, “We certainly observed the deterioration in liquidity, and not necessarily in bid/offer spreads, but in the depth of the market. I wouldn’t limit that to credit markets; things like index linked markets are less liquid than they used to be and even the most liquid markets such as treasuries are not immune.”

Sellside traders report that, given the risk characteristics of investment grade versus high yield, the relative size of matches suggest that high yield is actually easier to execute.

Asif Godall, global head traded credit at HSBC Global Banking and Markets, says, “One would maybe have thought that the ratio would have been four-to-one or five-to-one given the spreads of high yield trades compared with investment grade, but that is not proving to be the case. I think part of that is that regulation is making it harder to hold nominal inventory per se.”

Changing shape of the market

Capital adequacy regulations have increased the cost for banks to hold inventory and the sellside holds less to compensate. As a consequence the buyside has to look elsewhere to find a match. The market has reacted. In the credit markets new firms such as Algomi and MTS/B2SCAN are offering pre-trade checks to identify where liquidity may exist amongst buy and sellside firms, while FIX protocol-based Project Neptune is underway to standardise messaging between market participants in order to facilitate identification of trading opportunities.

Trading venues are also opening up to offer innovative models for matching orders effectively. Where the dealer-client model is undermined by the reduction of inventory, all-to-all models are increasing so that buyside firms are able to trade with other buyside firms. For example, where capital is withdrawn from one firm’s funds the resulting sell-off of assets can provide another fund with the opportunity to fill buy orders.

Electronic trading is more prevalent in the government bond markets. Research house Greenwich Associates estimates that electronic trading of European government bonds has increased from 43% of volume in 2008 to 57% in 2015. However in the US there are serious concerns that the high proportion of high-frequency trading (HFT) volume has no depth, creating volatility spikes. A recent Federal Reserve working group report blamed the ‘flash crash’ of 15 October 2014 in US treasuries on this effect (see Louise Rowland’s article: click here). 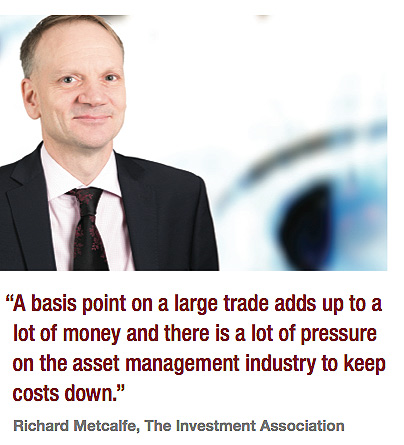 Richard Metcalfe, director of regulatory affairs for buyside trade association The Investment Association says, “You could take the view that it is micro-volatility and the question for real money managers is how much does it matter? Well a basis point on a large trade adds up to a lot of money and there is a lot of pressure on the asset management industry to keep costs down.”

New regulation is set to make things more difficult in Europe. In 2017 the review of MiFID II and associated MiFIR will introduce pre- and post-trade transparency for bonds, increasing market impact for orders not granted a waiver, available for certain request-for-quote (RFQ), voice traded and large-in-size orders.

Furthermore MiFID II imposes tougher best execution obligations on traders, with increased transparency for their end investors around both costs and execution quality, the latter requiring a revision of existing best execution policies.

Kristian Karppi, managing director at K&K Global Consulting says, “With MiFID II in Europe as of January 2017 fixed income head traders will have to manage increased amounts of operational regulatory risk, in addition to the investment risk, due to the new execution obligations under Article 27.” 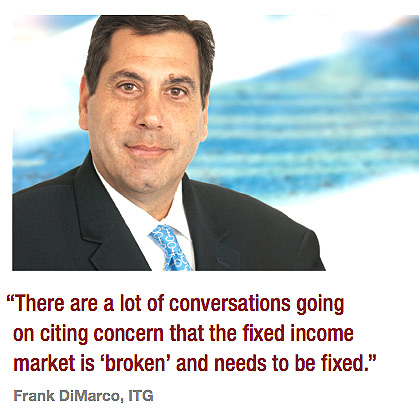 In the US regulators have less concrete plans but are investigating possibilities. Frank DiMarco, head of fixed income trading at agency broker ITG says: “There are a lot of conversations going on citing concern that the fixed income market is ‘broken’ and needs to be fixed. However to date there has not been a lot of prescriptive rule making around what needs to change.”

The Financial Industry Regulatory Authority (FINRA) has issued a request for comment on disclosure of the capacity in which the dealer is acting to define riskless principal and transparency of mark-up or mark-down a broker receives. Also being discussed are aggregating trade prices for dark and lit venues to provide FINRA and the SEC with access to live market prices, potentially looking at equity market structures such as the Securities Information Processor (SIP) and the trade-through rule.

For the moment buyside traders are adjusting to the new landscape, having followed the Kübler-Ross model associated with loss*, says Godall. “There has been denial, anger and bargaining. This is the year of acceptance.”

Acceptance is taking the form of technological innovation. Of 27 buyside head traders surveyed by K&K Global Consulting, 30% already have or will commit to use a form of fixed income transaction cost analysis (TCA) system, including 3% who had developed in-house systems. In Europe this is challenging, as there is no post-trade data source, such as TRACE provides in the US. 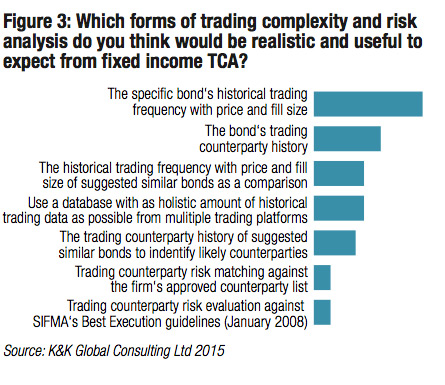 To be effective, a TCA platform would need to provide comparable analysis of broker performance and venues, as well as peer analysis. However, to do this in a meaningful way (see Figure 3), Karppi observes that data from different trading models will need to be aggregated and normalised. “There are considerable challenges in capturing and time-stamping voice trading data,” he says. “One particular subject of interest is whether new electronic venues could be analysed for trading costs.”

Harrington notes that the use of electronic venues allows buyside firms speed and efficiency of trading as well as gaining access to better price transparency to avoid higher transaction costs. “Five years ago electronic trading platforms were 25% of my business,” he says. “Three years ago they were 30%, and in the first quarter of this year they were 45%, so I think that will continue to increase until at least half my trades are on electronic trading platforms.”

Despite the promise that these platforms offer, it is far from certain that removing a cog as significant as sellside liquidity provision can be overcome purely by the rest of the machine increasing its efficiency.

Blake says, “I think it’s going to be difficult to see a marked improvement overall in the secondary fixed income market unless the market goes through some sort of structural transformation. That’s difficult, as the model works extremely well from a treasurer’s perspective, who wants to issue bonds.”

Note: In the computer industry, vapourware is a product, typically computer hardware or software, that is announced to the general public but is never actually manufactured nor officially cancelled.

*The Kübler-Ross model is a series of emotional stages experienced by survivors of an intimate’s death, wherein the five stages are denial, anger, bargaining, depression and acceptance.