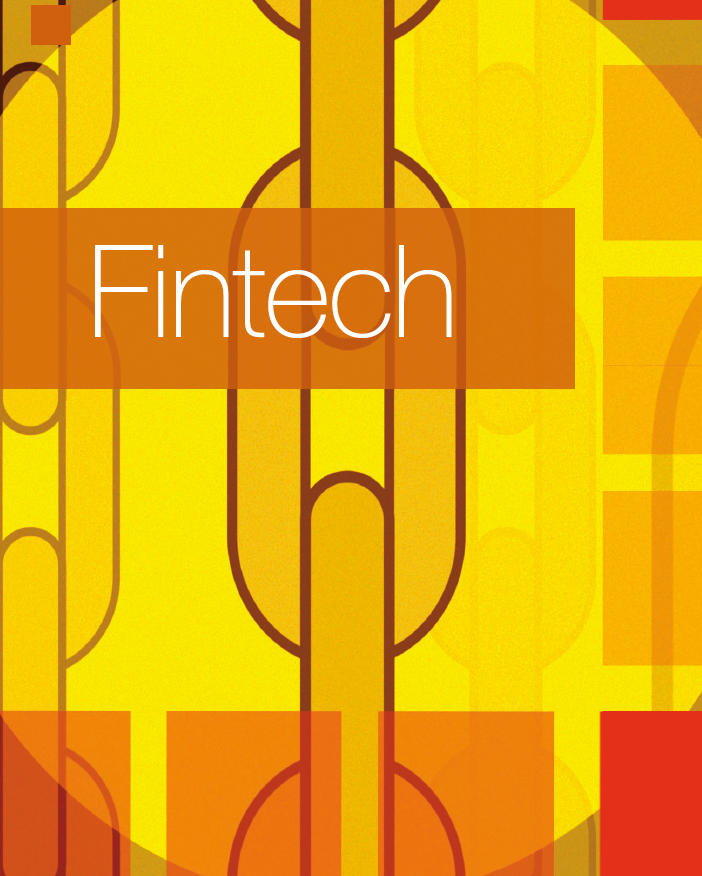 BLOCKCHAIN: WHAT THE INDUSTRY DID NEXT.

Without an industry consensus on distributed ledger technology, internal developments are the future. Dan Barnes reports.

In February 2019, JP Morgan launched a digital coin that represented fiat currency, to facilitate the exchange of value between institutional accounts. The JPM Coin uses blockchain-based technology to allow instant transfer of payments. In January 2019, HSBC reported to have settled more than three million FX transactions and 150,000 payments worth $250bn using its own distributed ledger technology (DLT) over the previous year.

DLT has been proven tested and shown as useful infrastructure in both delivery vs payment (DvP) or payment vs payment (PvP) spaces by major financial institutions. However, this value is eradicated from the promise it initially offered, promising to remove post-trade processing from transactions, along with associated costs.

Blockchain, the DLT underpinning bitcoin transactions, was conceived as a way to avoid payments being made using non-existent or fake currency. Bitcoin can only be transferred if the shared database / ledger that has recorded its transactions confirms it is legitimately owned, based on previous transfers.

In making that check pre-trade, the system moves the settlement process to the point of trade, where using other models it is run one or two days (T+1 / T+2) after the trade is agreed. Fundamental to the T+1/T+2 structure is the need for an investor to communicate the request to sell via a broker at a given point in time, which can be affected immediately, while the process of transferring securities from a custodian account requires a more formal set of checks. This prevents brokers trading client assets in order to prevent fraud. When trading across borders Nostro accounts are needed, with a bank parking money with another entity overseas, to act as a buffer against transaction problems.

Whether in the local settlement process or trading overseas, there is still risk and uncertainty in a transaction until settlement is completed. Removing that risk frees up any capital needed to hedge against it. The straightforward advantages of DLT are clear, which raises the question of why the technology is not more widely adopted. 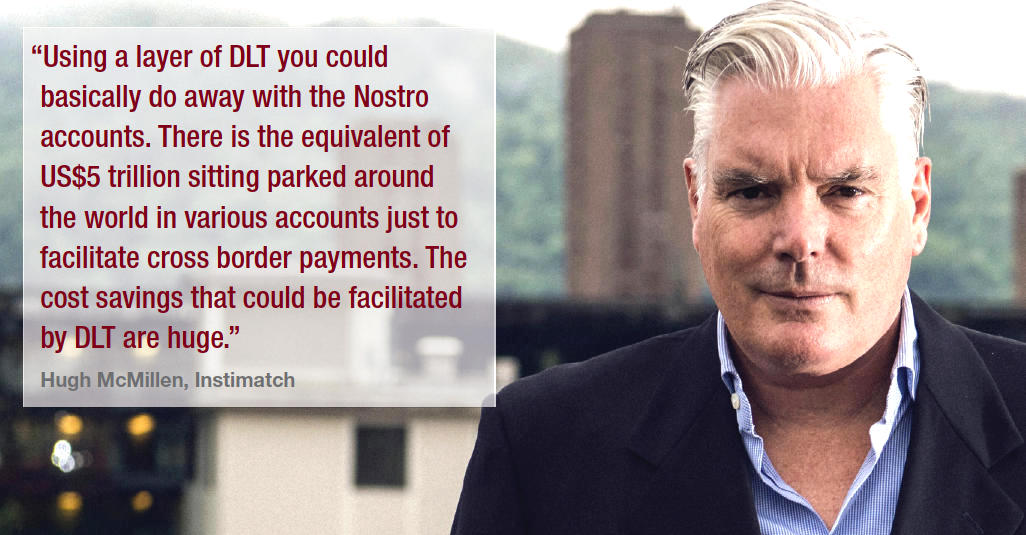 “Using a layer of DLT you could basically do away with the Nostro accounts,” says Hugh McMillen, founder and chief innovation officer at Instimatch. “There is the equivalent of US$5 trillion sitting parked around the world in various accounts just to facilitate cross border payments. The cost savings that could be facilitated by DLT are huge, it alters the whole settlement costs. The fact that you can pledge securities and margin them properly, without actual physical settlements from one CSD to another.”

To reduce the post-trade costs implicit within trading, banks will need to replace the existing settlement infrastructure with a newer version that they can all connect to. To use a DLT-based model they must agree the technology that will underpin it. 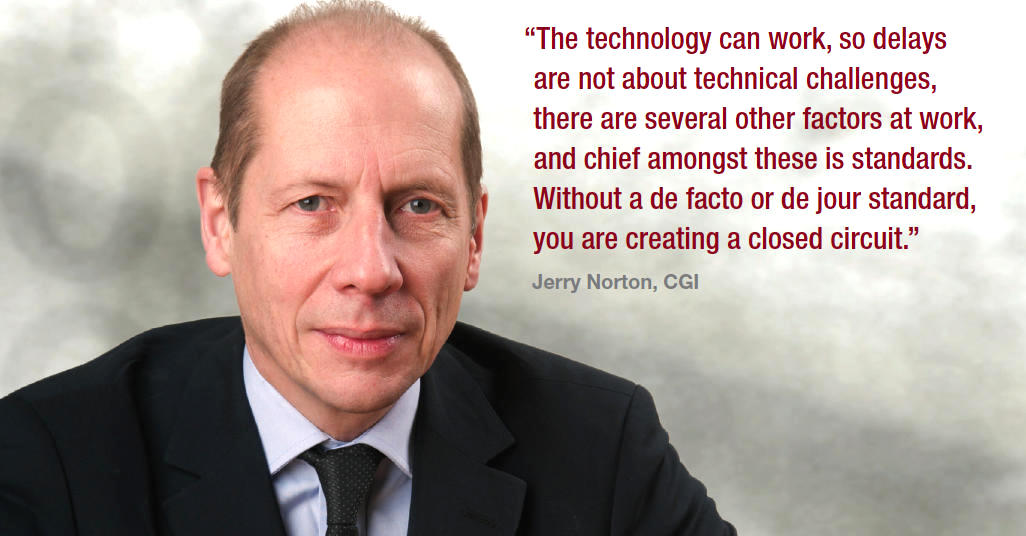 “The technology can work, so delays are not about technical challenges, there are several other factors at work, and chief amongst these is standards,” says Jerry Norton, head of strategy for CGI’s UK financial services business. “Without a de facto or de jour standard, you are creating a closed circuit.”

However, many banks are engaged with multiple consortia, which are effectively creating rival standards. In doing so the banks are sustaining rivalry in the hope that one will emerge as a victor, instead of choosing a model.

Where infrastructure is developing DLT, that could create a de facto standard. For example, The Australian Stock Exchange (ASX) is using Digital Asset DLT to replace its settlement systems. The US Depository Trust and Clearing Corporation announced the results of research into DLT provided by Digital Asset (DA platform) and R3 (Corda platform) in November 2018 which showed that entire trading day’s equity trading volume at peak rates, which equated to 115,000,000 daily trades, or 6,300 trades per second for five continuous hours, could be run on either platform.

Yet multiple infrastructures running on various DLTs would simply replicate the existing model of connectivity that trading firms have with settlement platforms today. A lack of interoperability between them would not reduce costs for the settlement banks, but may for the infrastructure provider itself. As infrastructure does not typically face competition, and therefore price pressure, the extent to which savings would be passed on is unclear. Banks and trading firms would still be left with the challenge of how to move data or instructions from one DLT mechanism to another. 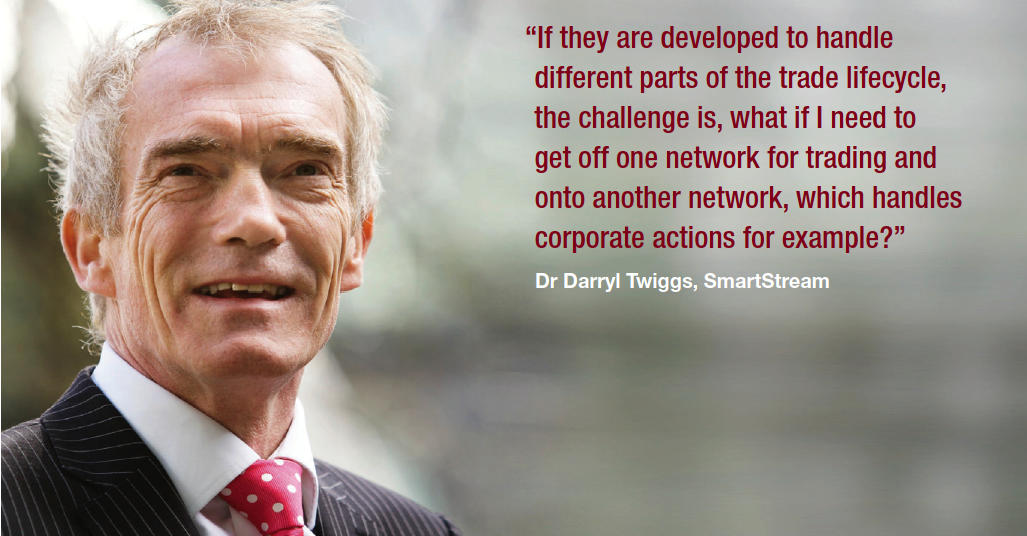 Dr Darryl Twiggs, SmartStream says, “If they are developed to handle different parts of the trade lifecycle, the challenge is, what if I need to get off one network for trading and onto another network, which handles corporate actions for example?”

The big consortia, which had initially promised to create standards through consensus, have seen declines in support. R3 has lost Goldman Sachs, JP Morgan, Santander, Morgan Stanley, and National Australian Bank as members. Digital Asset saw chief executive Blythe Masters exit in December 2018 and has since seen James Powell, chief information and technology office of engineering leave, along with a number of regional staff. However, that should not be read as sentiment for the whole market argues Michele Curtoni, vice president in State Street’s Digital Product Development and DLT team.

“What happens with any one consortium is not a strong indicator of progress,” he says. “Some might have had membership or licencing issues that they were not happy about, but blockchain is really about the creation of networks.”

If a consortium does not prove to be the answer, there are moves afoot to deliver a technical standard via other routes; work is ongoing with the ISO/TC 307 committee, which is developing commonality around taxonomy, interoperability and governance, the latter also being a major stumbling block.

The need for a shared ledger between peers creates a demand for governance over the intellectual property and processes within the mechanism. While a consortium can provide a structure to support that, at least some departures have been triggered precisely by ownership debates.

“We need blockchain to have a completely new governance structure so that in the transaction flow, I don’t see the data from somebody else,” notes Curtoni. “I have to make sure the data governance layer has been built in a way that I can be 100% confident I am not breaching any data policies.”

That need for control and protection feeds into the selection process for systems. McMillen notes that Instimatch chose to work with R3 technology because it made compliance with the European Union’s General Data Protection Regulation (GDPR) more straightforward. His firm is working with a major bank to support cross border money market engagement, noting that at present some 45% of money market activity is purely domestic.

Central banks are looking at the potential to provide a possible point of origin for digital token or currencies, and several have been working on proofs of concept to issue risk-free fiat currency via DLT.“The utility settlement project seems to be approximately two years away, involving central banks and systemic banks,” says McMillen.

Consequently, at present, projects like those of HSBC and JP Morgan are proving more likely to deliver in the shorter term. 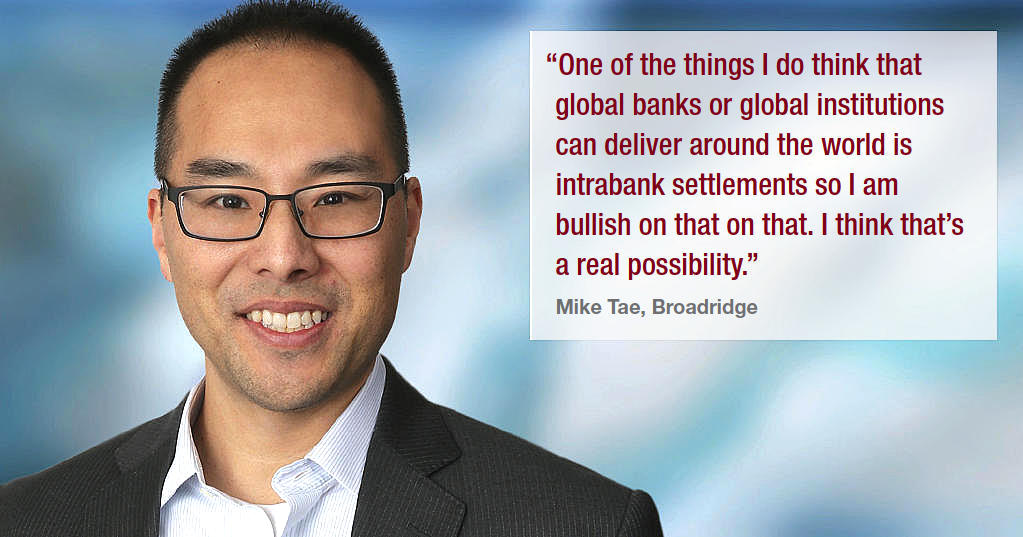 “One of the things I do think that global banks or global institutions can deliver around the world is intrabank settlements so I am bullish on that,” says Mike Tae, head of strategy and M&A at Broadridge. “I think that’s a real possibility. There are questions that need to be answered around the legality of digitised assets on the blockchain, but that is more straightforward when it’s inside of the company.”