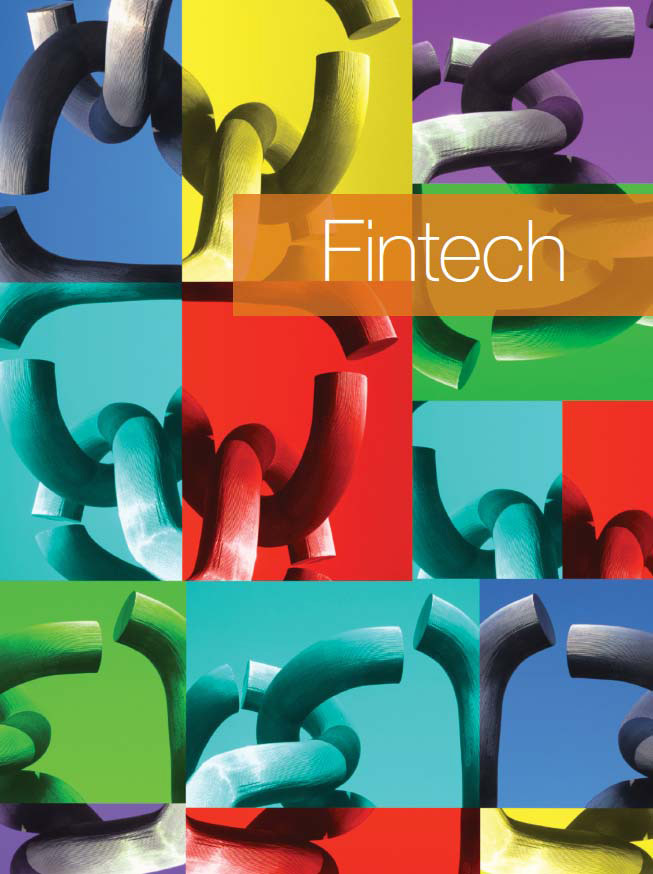 BLOCKCHAIN: WHY MONOPOLIES COULD BEAT CONSENSUS.

Market operators are the traditional builders of infrastructure but banks want to own distributed ledgers. Can they? Dan Barnes reports.

A universally recognised good idea, like blockchain, is often hard to realise. However, a distributed ledger technology (DLT) such as this could dramatically reduce the costly administration needed to check capital markets transactions. An attractive proposition for risk averse banks who are keen to cut error rates

“Nearly every single major financial institution is exploring blockchain or conducting some sort of gap analysis,” says David Pagliaro, head of State Street Global Exchange, EMEA. “Numerous firms are creating their own private blockchains which, while contrary to the ideal of a public, shared blockchain, is very interesting. Internal blockchains can help companies manage internal inefficiencies and streamline various practices, even if it does make it harder to create a unified, public shared ledger, subject to harmonised standards and regulations.”

Alicia Pertusa, BBVA’s head of Digital Strategy in Corporate and Investment Banking says DLT is one of the most relevant disruptive technologies to banking. “Our role is to bring them to specific projects for the benefit of our clients. That requires a deep knowledge of a technology itself, and a deep knowledge of the business. The biggest challenge with disruptive technologies is making the link between the potential and the implementation in the business for our clients.”

The cost of DLT

Efficiency is without doubt the selling point of a distributed ledger. That in itself can be sold to clients where there is a saving to them as a result, either in time, risk or capital. However, there are concessions to be made, in order to get that efficiency.

To share a database across multiple firms requires standardised technology and processes. Getting consent for these has led to a flurry of activity within consortia, collectives and commercial firms such as R3, Ethereum, and Digital Asset Holdings (DAH) which have many of the same banks involved in their projects to build standardised technologies.

There have also been some dropouts – R3 has seen Goldman Sachs, Santander and JP Morgan leave most recently in April 2017. Although the banks have not disclosed their reasons publicly, there are known challenges within consortia. The two biggest are the ownership of, and contribution to, intellectual property, and the ownership and management of a centralised authority to maintain and manage a shared ledger. 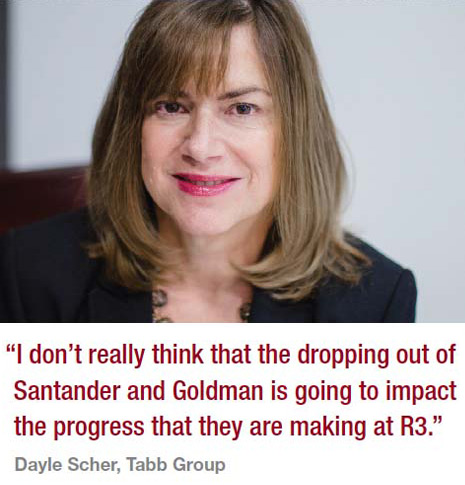 However, Dayle Scher, senior analyst at Tabb Group says that where there are disagreements, that should not undermine the agreements already established. “I don’t really think that the dropping out of Santander and Goldman is going to impact the progress that they are making at R3,” she says. “The members that I have spoken to are really pleased at least with the level of communication that is taking place across those 70 banks. And I don’t think you can underestimate that type of communication amongst competitive banks.”

Banks are not the only types of firms developing DLT solutions. Central securities depositories (CSDs) and clearing houses are also looking at the technology to tackle post-trade administration such as the reconciliations between banks in order to verify a transaction. DLT settles a trade at the point of transaction, essentially removing the post-trade element of the business.

“The only way you get to the settlement side of things, is if you actually get the shares issued on a blockchain,” says Tom Jessop, president of DLT provider Chain.

This crossing over of roles allows ownership of DLT to fall at the door of banks, CSDs, clearers or the trading venues which provide the point of exchange via a central limit order book. However, it is the antiquated nature of banking technology that has driven the banks to try and push together for change. 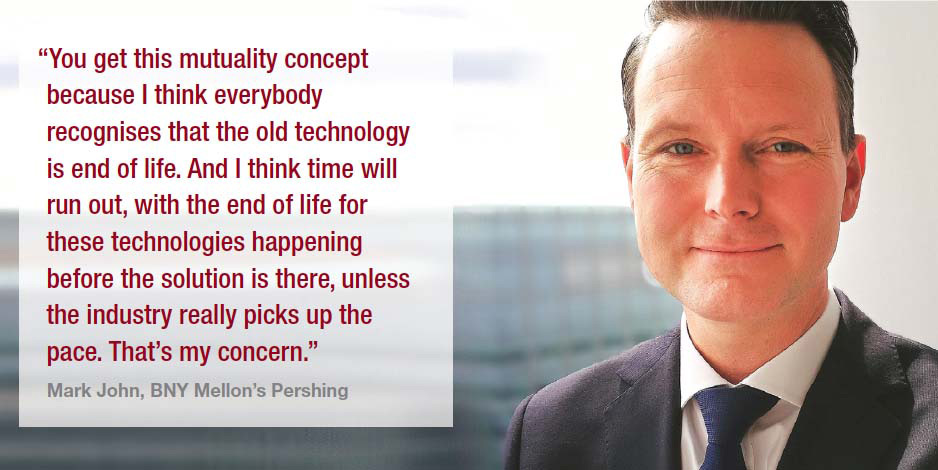 “You get this mutuality concept because I think everybody recognises that the old technology is end of life,” says Mark John, head of Product and Business Development for BNY Mellon’s Pershing and Broker-Dealer Services in EMEA. “And I think time will run out, with the end of life for these technologies happening before the solution is there, unless the industry really picks up the pace. That’s my concern.”

DLT can be used to address internal technology demands without collaboration in some instances with infrastructure firms, banks or even investment managers.

Joshua Satten, director of business consulting at Sapient Global Markets, says, “the hugely relevant application is having a distributed ledger technology as the core for your investment ledger. Today we normally operate on multiple books. So, for the best investment performance modelling, monitoring, attribution and management you are best served to have an integrated singular ledger, that would pull together all the information you need to manage your fund or your investment on a daily real-time basis.”

There are several strong examples of internal development. Since March 2016 custodian bank BNY Mellon has been running a DLT system, Broker Dealer Services 360 (BDS360), which it uses as a back-up to its own US treasury bond settlement system called BDS. As a supplemental book of record system, it is not saving the bank money directly, but makes the platform resilient with a substantially lower cost system than could be developed using non-DLT technology. The bank has plans to extend the system to clients.

Market operator Nasdaq developed issuance and trading of equities in its private market using DLT supplied by Chain in 2015 and announced in May 2017 that Citi’s connectivity platform Citiconnect had been used to conduct transactions.

Meanwhile, the Australian Securities Exchange (ASX) and Digital Asset Holdings (DAH) have developed a system that is intended to operate alongside the exchange’s settlement platform CHESS. ASX will decide whether the system can go live in December 2017, at which point it will be the first exchange to run a major piece of market infrastructure on DLT. John notes that as a baseline for moving from proof of concept to the next stage means that ASX will be closely watched.

“Other exchanges that have either total market share, or majority market share, can follow in those footsteps,” he says. “Lessons have been learnt from all of the members of the R3 consortium and similar bodies of what a distributed ledger technology solution could be, so I think a much richer form of knowledge has been gained from all of these discussions.”

While Australia has a competitive environment in name – Chi-X Australia has competed with ASX on secondary markets since 2011 – the environment is still one in which the exchange not only dominates but owns the post-trade infrastructure. A few other high-volume markets, including the BRICS (Brazil, Russia, India, China) countries and Japan, can claim a similar structure. The US and Europe both see too much competition for any one exchange to develop a system that is likely to get critical mass with all of the local banks.

Yet it is ASX, Nasdaq and BNY Mellon that are grabbing attention as the potential future deployments. As trade or post-trade service providers they have existing networks that require connective tissue, they have agility and critical mass without needing a quorum to agree on moving forwards.

Jessop says, “The challenge is not the technology it’s the organising function to get all of these people to the same place at the same time. Exchanges are in a great position; they already have the network, they already have the transactional rules that the members adhere to. The question is can they take technology and do something interesting, different and new with it?”