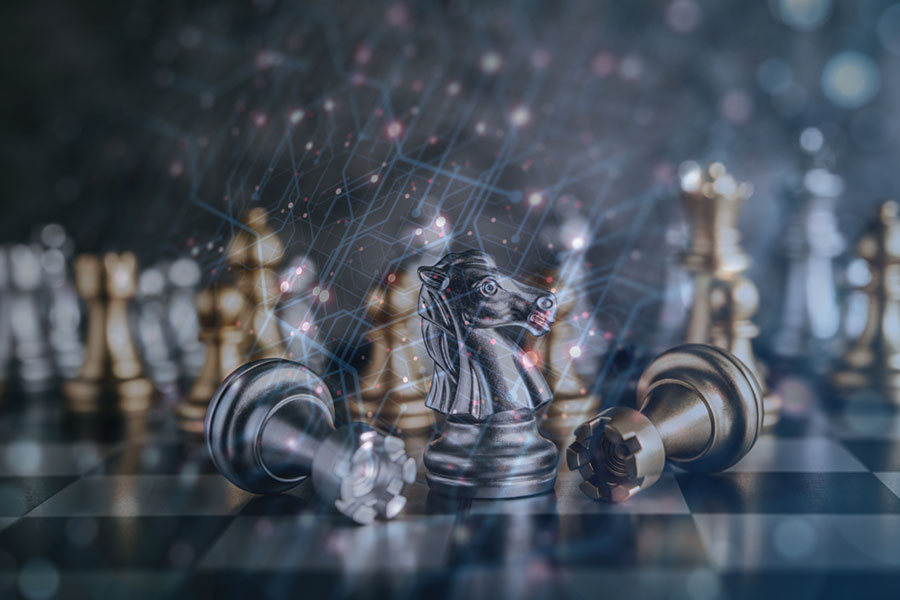 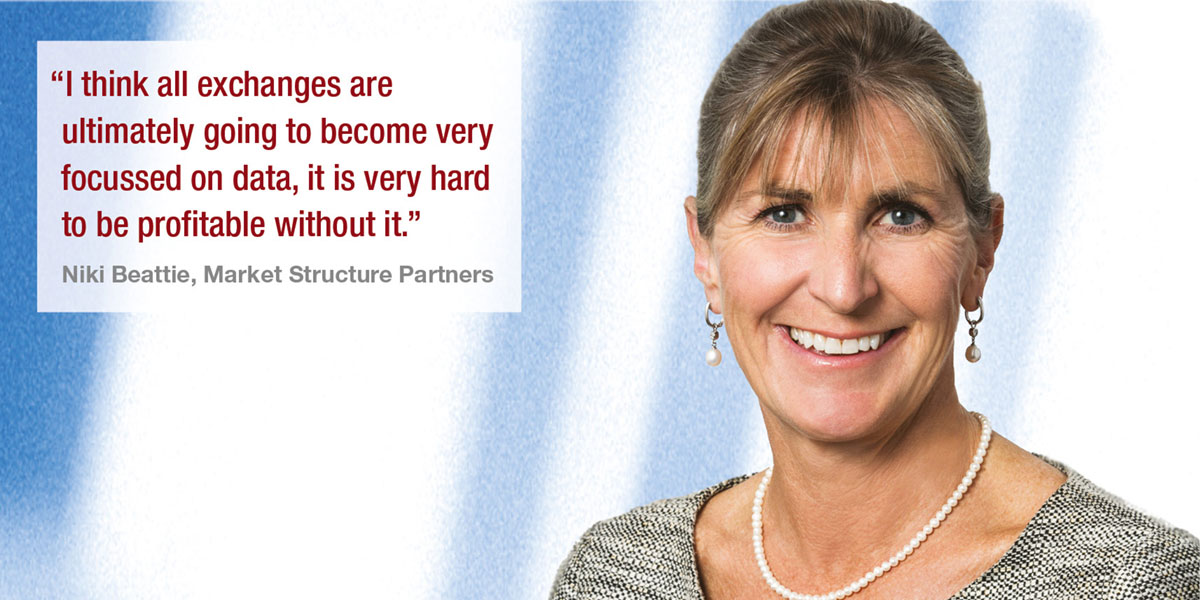 In the mid-2000s banks fought against the costs that stock exchanges were able to charge in transaction fees. This drove many equity bourses into new business areas as they sought to maintain profitability.

Analysing the different ranges of revenues within various exchange businesses clearly shows that competitive threats vary, depending upon the individual business. For example, with 68% of revenue at LSEG coming from data and indexing, compared with 14% and 18% at Euronext and Deutsche Boerse, its greatest rivals are data and index providers. 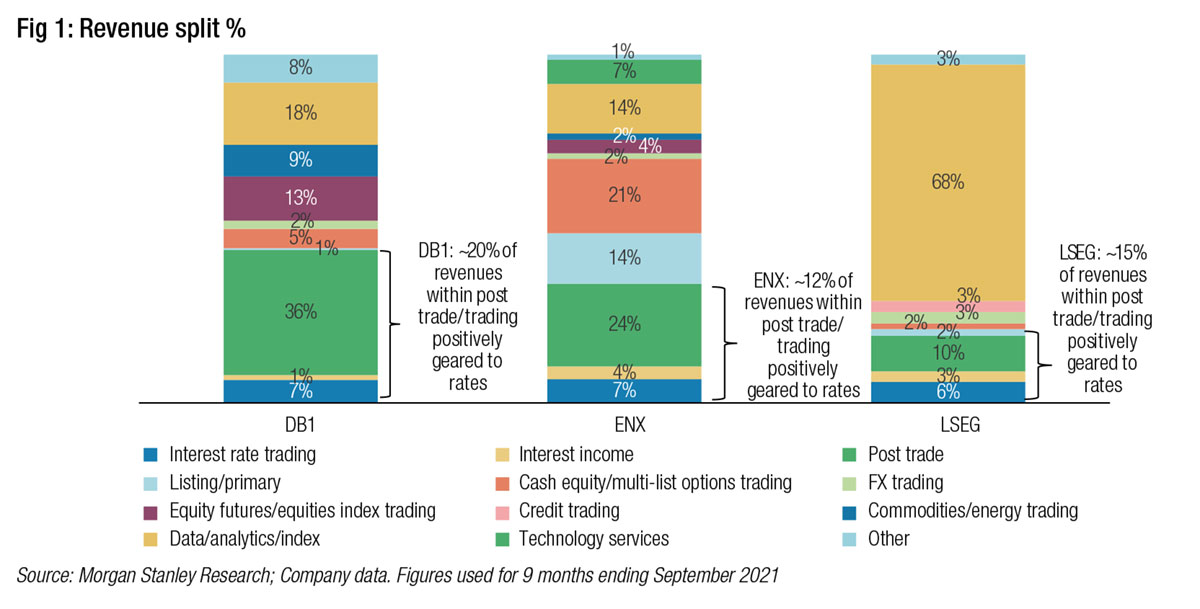 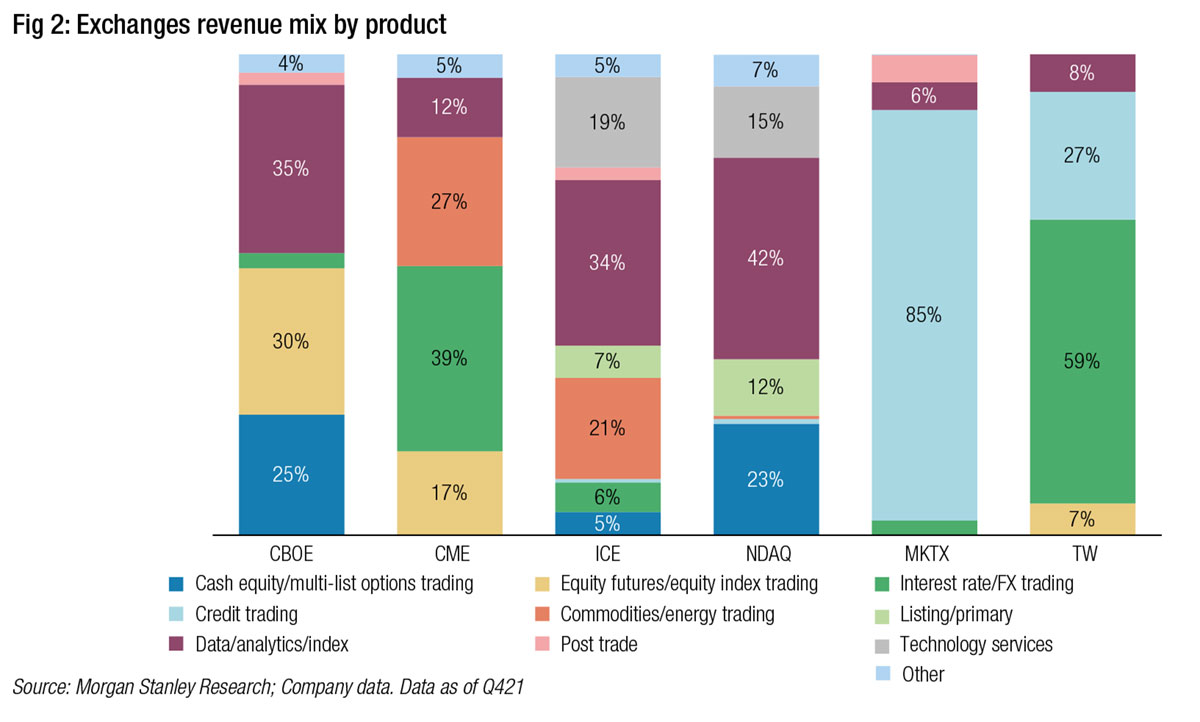 “I think all exchanges are ultimately going to become very focussed on data, it is very hard to be profitable without it,” says Niki Beattie of Market Structure Partners. “The data business is greater than that of the exchange in some cases, the securities trading part of exchange can often feel like subsidiary to the bigger data business. I think that several national exchanges are not really fighting very hard to win IPOs, whatever they tell their respective governments.”

At the heart of an exchange is the listing and trading of securities and derivatives, and much of the other services it offers are derived from those. 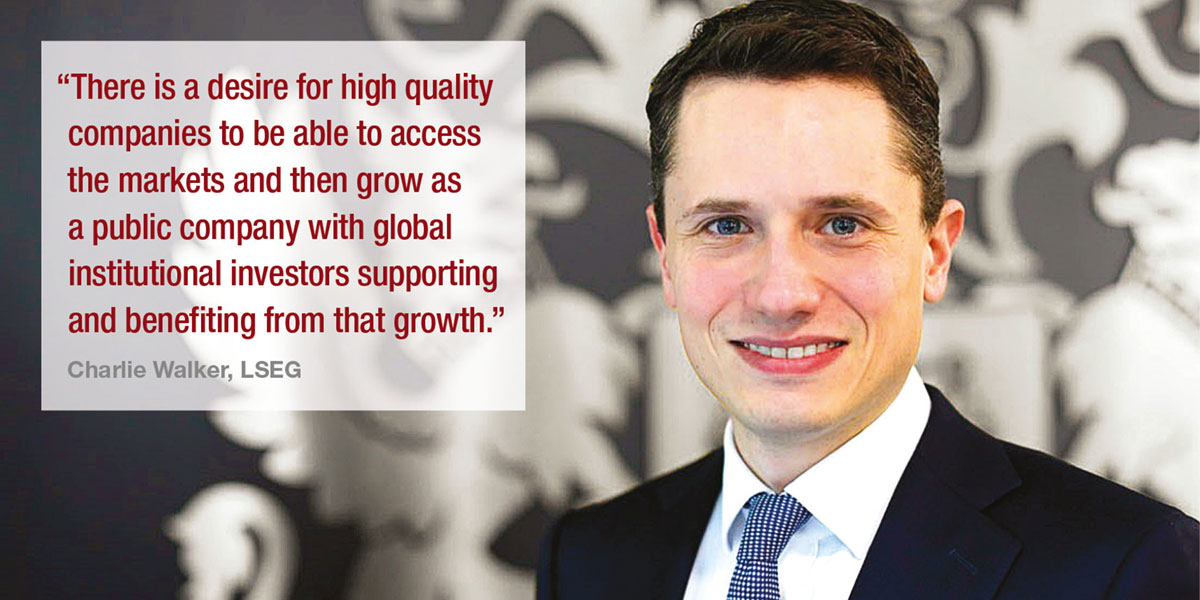 “The interests of companies and investors are often aligned. There is a desire for high quality companies to be able to access the markets and then grow as a public company with global institutional investors supporting and benefiting from that growth,” says Charlie Walker, group head of equity and fixed income, primary markets at LSEG.

Beattie notes that while the fight to win listings may be waning, there is a real desire to improve the listing process for equites and the issuance of bonds.

“Various people have been trying to change the IPO process, so far without much impact, but they could make improvements such as tracking who got what in an IPO, whether people were happy with their allocations and so on,” she says. “There are many uses of data that the exchanges could and will get into from primary market activity.”

The LSE has supported this through several investments in fintechs which are trying to expand access to new issues, and to reduce bottlenecks on processing, such as PrimaryBid, which opens the door to retail investors.

For the senior management within exchanges, building a firm’s footprint requires expansion across business lines and geographically. Over the past two years, mergers and acquisitions has been a big focus for European exchanges, with LSEG acquiring data giant Refinitiv, SIX Swiss Exchange purchasing Spanish market operator BME, and Euronext buying Borsa Italiana from LSEG, which was divested as part of the Refinitiv deal.

“When I started in 2018, we began a journey to be very strong not only in Switzerland, but also to expand our size and business portfolio, which is why we did the BME acquisition in 2020,” says Jos Dijsselhof, CEO SIX. Integration of BME is going very well, we completed the corporate side in the first year and we are now into the business integration. As an example we have the BME growth markets in equity and fixed income in Spain and on the back end of last year we also launched an SME segment on the Swiss Exchange called Sparks. We thought it was the right time and brought the knowledge in the company together to support that launch. We also expanded our warrant issuing system, Connexor from Switzerland into the Spanish market. 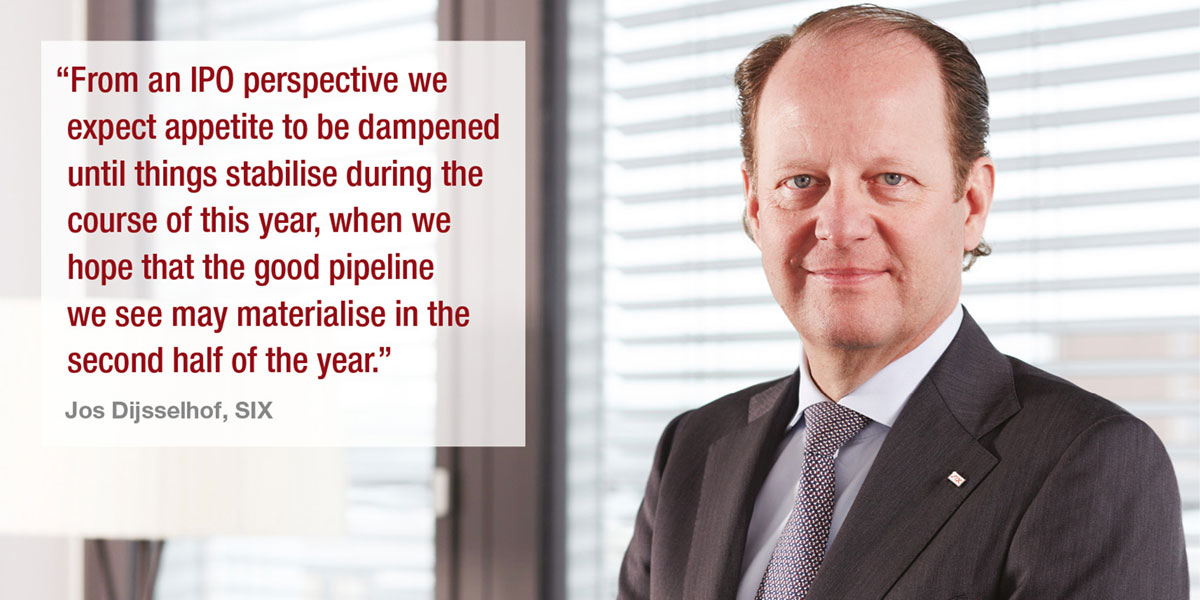 Bringing together businesses creates the ability to cross pollinate ideas but also to create more efficient use of resources in bringing services to the combined client base.

Robert Barnes, group head of securities trading at LSEG & CEO of Turquoise Global Holdings, says “With completion of the Refinitiv acquisition, LSEG has grown from around 4,000 to 25,000 colleagues with half in Asia. In the capital markets team, we consolidated the secondary trading units of London Stock Exchange, Turquoise & Turquoise Europe, exchange traded products (ETPs) & exchange traded funds (ETFs), into a single securities trading team that unleashes the combined complementary strengths of these businesses to deliver a unified client-centred experience world-wide. Through a single connection into the LSEG data centre, clients can access the full suite of execution channels and increasingly global stock, America depository receipts (ADR)/ global depository receipts (GDR), and ETP/ETF universe.”

With the war in Ukraine impacting markets to such an extreme level, it is clear that trading volumes will be higher this year.

“Before 22nd February it appeared 2022 would be a good year for IPOs with trading remaining steady,” says Dijsselhof. “Now it is the other way around, with trading volumes very closely linked to volatility which is quite heavy. From an IPO perspective we expect appetite to be dampened until things stabilise during the course of this year, when we hope that the good pipeline we see may materialise in the second half of the year.”

For any market operator, whether an exchange or multilateral trading facility (MTF), providing reliable trading, and a range of execution choices will be key in order to continue to attract liquidity in a volatile market.

“When there is disruption in the market, we see a flight to quality for trading on regulated, multilateral order books – lit and dark – like those of the London Stock Exchange and Turquoise,” says Barnes.” 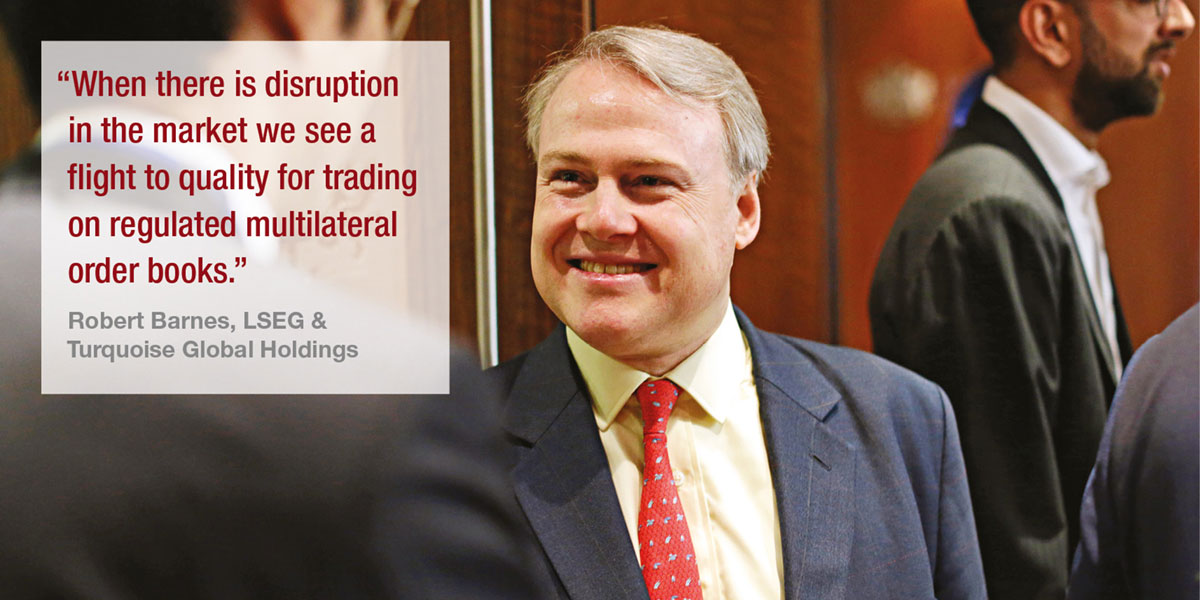 Morgan Stanley analysis shows that a “combination of rates and volatility benefits” should feed through to financial firms in 2022, however exposure to rates particularly will be a great strength for an exchange as central banks respond to very high levels of inflation.

Dijsselhof notes that fixed income and derivatives are both more developed on the BME side than on the SIX Swiss Exchange side, which he plans to address.

“We would like to be more successful in terms of issuing and list fixed income on our markets so we don’t accept that everything currently goes to Luxembourg or Ireland, we have competitive offerings and we are working with tax authorities and government to make that happen in both countries,” he says. “Then we want to get trading more active in fixed income, and that is a challenge to all exchanges but we do what we can to make that stronger. The other option in FI is via our digital exchange SDX and there is a fair bit of interest amongst firms to list bonds digitally. That is another way to make our fixed income business more impactful and future driven.”

“I see fixed income as being the next area of growth,” says Beattie. “Equities has been done to death, looking at primary markets and secondary markets it will be difficult to raise fees in the equity space, so I think people will turn to FICC markets.”

A move by Europe to a one-day settlement cycle (T+1) could bring significant benefits...
Read more