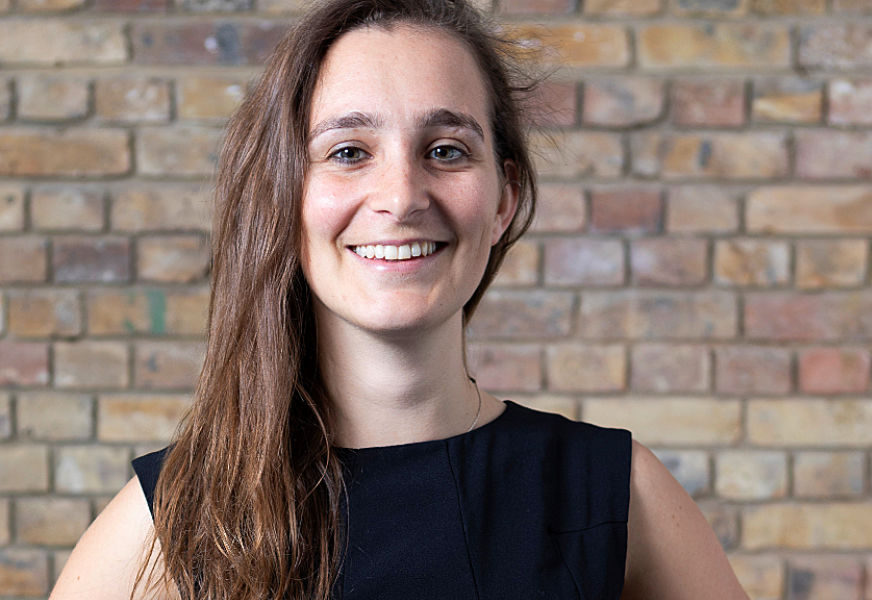 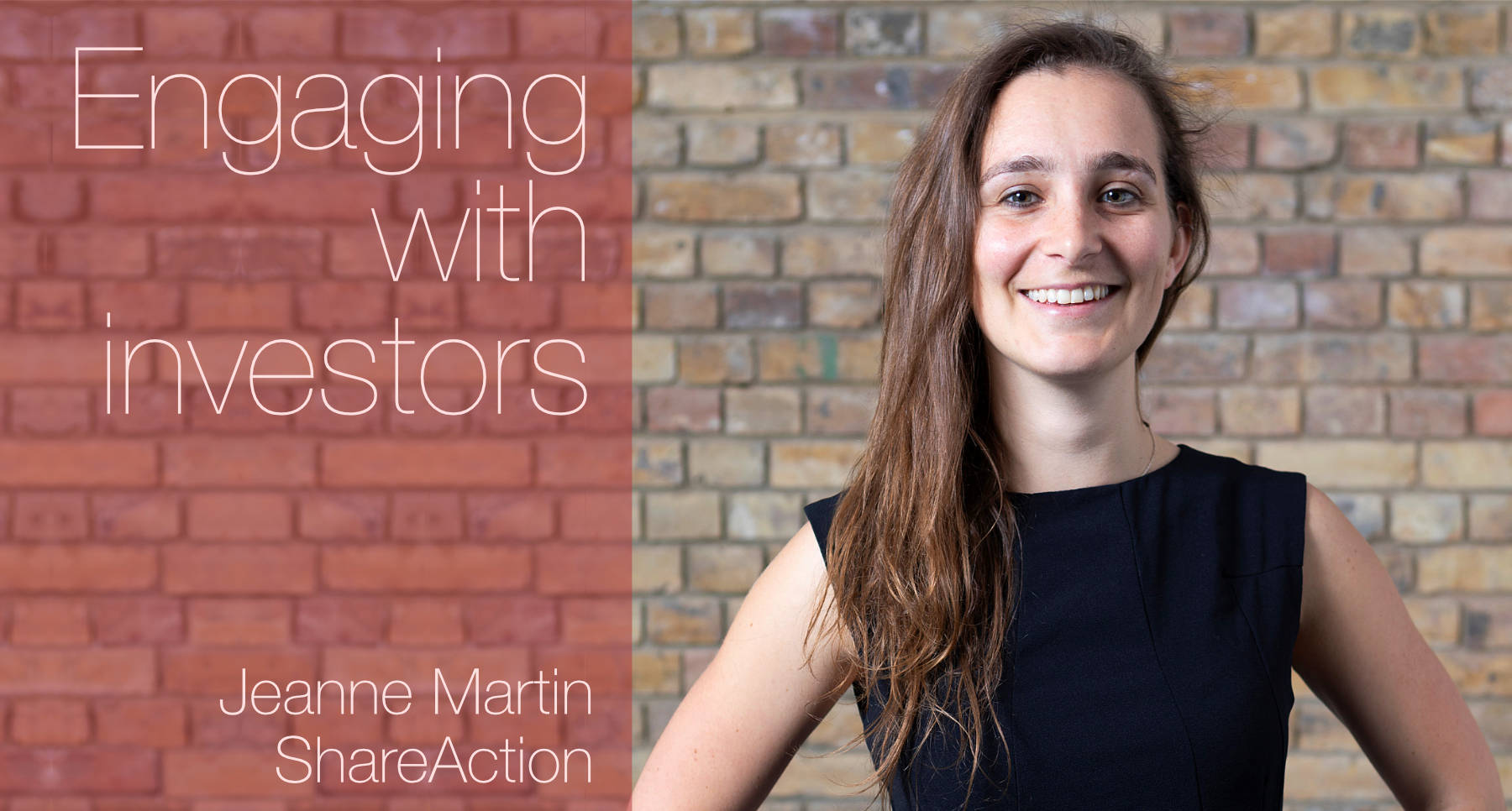 Jeanne Martin’s parents are scientists who wrote about the potential impact of climate change on the spread of malaria back in the 1990s. So, it is unsurprising that she is now Senior Campaign Manager at ShareAction, a research and campaigning organisation pushing the global investment system to take responsibility for its impacts on people and planet, and to use its power to create a green, fair, and healthy society.

Martin said: “I was always convinced that the economic system had a massive role to play in both being the cause of environmental issues, but also how it can be solved.”

ShareAction led a coalition of investors with $2.4 trillion in assets under management in filing a shareholder proposal at HSBC at the start of 2021 calling on the bank to reduce its exposure to fossil fuels, following a four-year engagement period.

Caroline Le Meaux, Head of ESG Research, Engagement and Voting at Amundi, said in a statement at the time: “Engaging with companies on the energy transition and decarbonisation of their activities is one of our key priorities. Amundi thus fully backs this resolution, as part of our more global commitment to banks on their energy transition policy in general and their coal policy in particular”.

Subsequently, the board of HSBC tabled a shareholder resolution in March that commits the bank to phasing out financing of coal-fired power and thermal coal mining in the European Union and the Organisation for Economic Co-operation and Development (OECD) by 2030 and elsewhere by 2040. The special resolution will be put to a vote at HSBC’s Annual General Meeting on May 28 and become binding if it is approved by 75% of shareholders at the AGM.

The investor coalition agreed to withdraw its shareholder proposal in exchange for the board-backed resolution, but may take further action if it is unsatisfied with the bank’s implementation of the new commitments.

“The next big challenge, once HSBC’s management resolution gets voted through, will be to make sure that the bank delivers on its commitments and publishes a robust coal policy as well as emissions reduction targets aligned with the 1.5˚C goal by the end of 2021,” said Martin.

The HSBC action follows ShareAction’s resolution at Barclays in January 2020 which was the first climate proposal backed by institutional investors at a major European bank. Barclays responded in March 2020 by becoming the first mainstream bank to announce an ambition to become “net-zero” by 2050.

“The financial industry is the lifeblood of the fossil fuel industry and other high-carbon industries, so if you fail to consider this you will never reach the desired outcome,” Martin added.

She continued that in the last four and a half years ShareAction has developed good relationships with the 20 European banks that the organisation engages with, as well as with their investors. ShareAction engages with banks on their financing of the fossil fuel industry and the measures they need to put in place to align their business models with the goals of the Paris agreement.

“We always try to engage privately with banks and companies before doing anything public,” added Martin. “However, given the scale and the urgency of the climate crisis there is only so much time you can wait.”

HSBC had announced a net zero ambition in October 2020. Martin explained that ShareAction obviously welcomed the move but was disappointed that there were no commitments on coal. As a result ShareAction carried out another round of engagement with shareholders and sent an investor letter to HSBC’s management. Analysis by ShareAction showed that in the four months leading up to its announcement, HSBC had provided fossil fuel companies with $1.8bn in financing, including for the construction of infrastructure for coal and tar sands.

“Following our letter HSBC announced they would not finance any new coal projects globally, which was a necessary but small step forward as most of the financial flows to the coal sector are in the form of corporate lending and underwriting,” said Martin.

ShareAction then started thinking about what else they could do and came up with idea of the shareholder resolution.

“We ended up with an amazing group of investors including a few who had never filed a resolution on climate change,” added Martin.

On 11 January this year 15 institutional investors and 117 individual shareholders, co-ordinated by ShareAction, flied the resolution which called on HSBC to publish a strategy and targets to reduce its exposure to fossil fuel assets, starting with coal, on a timeline consistent with the Paris climate goals. The group of co-filers included Amundi, Europe’s largest asset manager; Man Group, the largest publicly traded hedge fund; as well as asset managers and asset owners from the UK, Denmark, France, and Sweden.

Jason Mitchell, Co-Head of Responsible Investment at Man Group, said in a statement at the time: “As Europe’s largest bank and the second largest provider of fossil fuel financing, HSBC has the unique opportunity to help lead the financial services sector towards Paris-aligned commitments rather than mere ambitions. As shareholders supporting this resolution, we recognise the imperative and urgency for establishing targets and a timeline towards emissions reductions.”

Martin continued that ShareAction will also be looking to see how the group can leverage the results at Barclays and HSBC to get other banks to move on climate change and strengthen their coal and energy policies.

For example, last summer ShareAction escalated engagement with another bank and sent a private investor letter on its financing of the fossil fuel industry. The organisation is continuing to engage with the bank privately but if investors feel that the bank is not moving fast enough, they will increase pressure.

“Another example is our engagement with UniCredit where we had a really good relationship with the sustainability team but we got the impression that they weren’t really being listened to internally,” Martin said. “We co-ordinated an investor-backed letter to the executive team asking the bank to disclose in line with the Task Force on Climate-related Financial Disclosures (TCFD) and to strengthen its coal policy.”

Unicredit has committed to phasing out its exposure to coal by 2028. The Italian bank has also asked its clients to publish “a credible plan for phasing out from the coal business by 2028” by the end of 2021 and announced it will not do business with companies reliant on coal for more than 25% of revenues.

“Following pressure by investors and civil society organisations, Unicredit announced it would improve its TCFD disclosures and published a new coal policy, which it has since updated, and the bank has now one of the most robust coal policies in Europe,” added Martin. “It really goes to show the impact that investors can have in empowering internal staff members working on sustainability, and the actions that investors should expect banks to take on climate change issues.”

Martin is optimistic that the financial industry is moving in the right direction, especially as investors and customers are increasingly interested in how the industry invests their money. However, she stressed that the biggest challenge will always be to make sure that the industry is acting with enough urgency and that ShareAction focuses energy on the things that matter.

“Each time we convince a bank to move further on climate change, some investors approach us to tell us that it’s time to leave them alone,” she said. “However experience has shown us, again and again, that pushing them further and continuing our engagement pays off.”

Greenwashing
Although Martin is optimistic that a positive shift is happening in the financial services industry, she said there still needs to be more progress in asset managers’ environmental, social and governance strategies. For example, ESG can be a niche within an investment house and Martin said that is problematic because these practices need to be adopted across the firm.

“Last year we published an analysis of the world’s largest 75 asset managers and found that a large majority of them had sub-optimal responsible investment policies so there is definitely much work to do,” she added.

Fund managers were analysed across four topics: responsible investment governance, climate change, human and labour rights and biodiversity. ShareAction said no manager achieved an AAA or AA rating across all assessment topics although there were pockets of leading practice.

“On the majority of questions we asked, there was at least one asset manager that achieved full marks,” said ShareAction. “This shows that achieving an AA or AAA rating was entirely possible.”

Martin said: “Greenwashing is rife in industry and we are seeing a lot of ESG funds that still includes the likes of Exxon.”

In addition, she said it is important to look at issues other than climate. For example, the renewable energy industry is not well known for its social protection policies.

“I think it would be fine to include those in your fund if you also strongly engaged with them on social issues, but it is important that the conversation does not stop at climate change,” she added.

Career
Martin holds a degree in Environmental Policy and Economics from the London School of Economics and Political Science and a Masters in Environmental Technology from Imperial College, London. She joined ShareAction in 2017 as AGM Co-ordinator and took on her current role in June last year.

As a student Martin was involved in asking the LSE to divest from fossil fuels and their initial response was that engagement was better.

“However, when we dug deeper, we found no public documents outlining how the university was engaging with their investee companies and/or their asset managers on ESG topics, and what its plans for escalation were if private engagement proved unsuccessful,” she said. “There have been some important improvements since, though there is of course a way to go.”

She explained that the primary aim of the divestment movement was to affect the fossil fuel industry’s social licence to operate.

“I think that they’ve done that really well,” Martin added. “Pressure effected by the divestment movement has put pressure on and allowed investors to be bolder in their demands.”

Her advice to other campaigners is to not be afraid to do what they think is right and strategic, because there are always going to be people who criticise.

“We have never changed things by staying mainstream and it has always required people to drive the conversation by doing things they find uncomfortable,” said Martin. “So learn to master your fear of discomfort because it’s here to stay !”