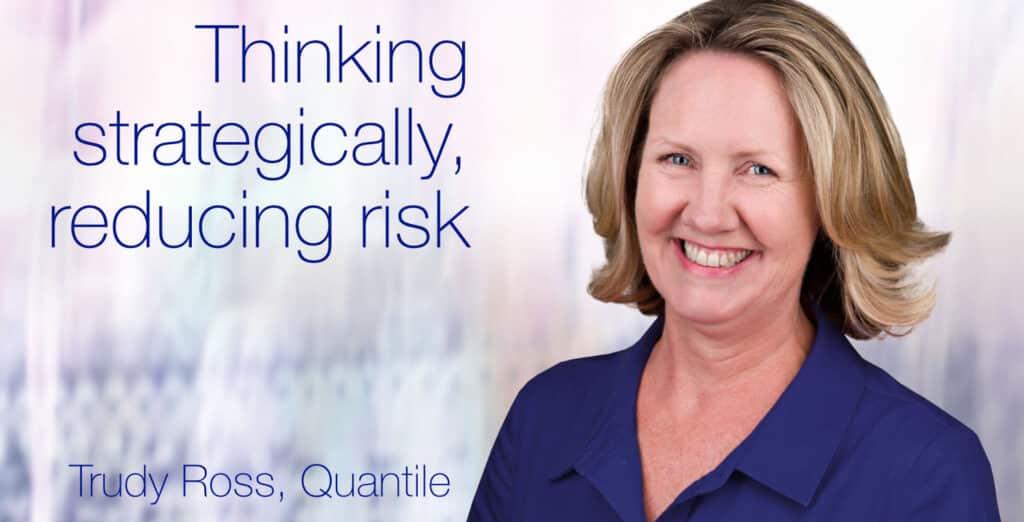 Trudy Ross became interested in finance when she was 10 years old and her grandfather taught her to invest the money she had saved. In 2016 she became the third person to join Quantile after retiring from a career in the City of London, including 16 years at Deutsche Bank. Quantile provides multilateral risk optimisation services which allow participants in the over-the-counter derivatives market to reduce counterparty risk and gross notional, release capital and improve returns.

Ross said: “The company has enabled me to do something different from my banking career – as it was a unique opportunity to build an incredible service from inception. The challenge of being involved from the start exposed me to a range of operational functions vital to the development of the business.”

Chief executive Andrew Williams had previously worked at Morgan Stanley for 18 years and co-founded Quantile in the summer of 2015 as banks wanted a trusted third party to reduce risk for the market as a whole. His co-founder, chairman Stephen O’Connor, had a 20-year career at Morgan Stanley and has served on industry bodies including as chairman of ISDA, the derivatives trade association.

“Collectively, we have a lot of experience across trading desks and dealing with market participants such as central counterparty clearing houses and were able to design a new service that we knew clients needed,” explained Ross.

Compression allows clients to “tear-up” offsetting derivatives trades in their portfolios to reduce the notional outstanding and the number of line items in their portfolio while maintaining the same risk exposure. Use of compression services has increased following the introduction of stricter capital requirements, such as the Basel III leverage ratio, which has led to banks reducing their balance sheets, and capital efficiency becoming increasingly important. Quantile has eliminated more than $230 trillion of gross notional since launching the compression service, including a record $7.2 trillion compression run at LCH in April 2020.

Ross said: “As a (now very established) start-up Quantile is nimble and agile, so we can listen to clients and quickly deliver products that are essential to them.”

Parag Khandelwal, principal at Spectrum Equity, said in a statement: “Quantile is at the forefront of risk optimisation for derivative portfolios, enabling clients to not only rebalance and reduce risk, but also increase their competitiveness and operating efficiency. They are making the financial system safer.”

Ross highlighted that she is proud of developing and retaining a unique culture during Quantile’s exceptional growth.

“Management work really hard to be accessible so that the environment is friendly, open and collaborative – giving everyone the confidence to speak up,” she added.
This year Quantile will continue to expand globally and open offices in Amsterdam and Tokyo.

“Our focus is to further extend our core services whilst innovating several new products,” said Ross. “Then there are the regulatory challenges that we all face, including Brexit.”
Other regulatory challenges include the transition from the Libor reference rate to new risk-free rates and the implementation of Basel’s SA-CCR, a standardised approach for measuring counterparty credit risk in the US.

Ross added: “We also want to grow our mentoring programme at Quantile, develop young talent, and offer opportunities to people across different backgrounds.”

Career
Ross grew up in rural New Zealand but her thesis at university was on the internalisation of the country’s businesses. She studied Economic Geography and followed this up with a Masters in Strategic Planning.

“I got my first job in the City after being given an interview with an asset manager as a wild card,” she said. “I researched the company and asked lots of questions, which definitely helped me secure the role.”

Her advice to women is to work for companies that have an inclusive culture where they can speak without fear of discrimination and feel supported. “I have always chosen the company before seeing what role I would like,” she added.

She continued that you have to find what you love and look for a path. “You also have to think strategically as there may be times you have to go sideways to enable you to move forward again,” Ross said.

Ross highlighted that it is important to be regarded as having expertise in your job regardless of gender.

“My work ethic has taken me far and I have always been treated as an equal by the men I have worked with,” she concluded.

As sustainability increasingly becomes mainstream, manager selection will be based on their env ...

Isabelle Girolami has been CEO of LCH Ltd. since 1 November 2019. She has since had to deal wit ...

Asian capitals closing in on London

London retains its number two spot on the global financial chart behind New York and is still t ...