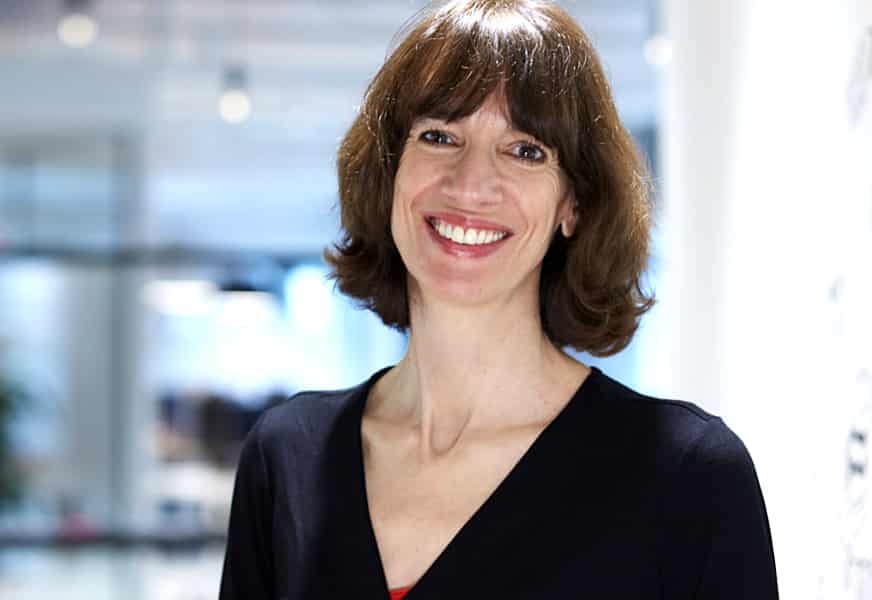 Marion Leslie, Head of Financial Information and Executive Board Member at SIX Group and a member of the board of BME talks to Lynn Strongin Dodds about data, digialisation and diversity.

Marion Leslie chalked up several firsts when she joined SIX, the owner of the Swiss Stock Exchange. She is not only the first non-Swiss female to lead a business unit – financial information – but also the first non-Swiss woman to be an executive board member of the Group, founded in 2008 via the triple merger of SWX Group, SIS Group and Telekurs Group.

The pandemic was also a novel experience and not one she expected when starting her job last January. However, despite the challenges, Leslie has forged ahead, leading her team, setting the strategy for the business and working with all the stakeholders.

“My role and responsibility had not changed,” says Leslie who moved to Zurich. “It is the old saying about ‘best laid plans’, but at the end of the day, my job is to work with my team to deliver value and critical data services to support our global customer base when and where they need it. We were also prepared in that our business continuity plan was in good shape, so all our employees had the right equipment to work remotely, so all our services continued to operate as normal.”

However, in the ten weeks before lockdown ensued in March 2020, Leslie managed to meet all the firm’s employees across 20 locations either in person or virtually. She has also built partnerships with third parties to deliver the data and regulatory offering of SIX to new clients and markets and also via cloud.

Leslie believes that the pandemic has only served to accelerate the trends that were already occurring in the exchange world, such as increased electronification, digitalisation and the move to the cloud.
It also reinforced the importance of data as a lifeblood for these market infrastructure players. Competition is heating up with the London Stock Exchange’s recent $27bn takeover of Refinitiv, but SIX is hoping to give the behemoth a run for its money with its $2.9bn acquisition of Spanish rival Bolsas y Mercados Españoles (BME), effective last summer.

On the big picture, SIX and BME will create a more diversified group with a strong presence across Europe, becoming the third largest European financial market infrastructure player and the tenth largest globally by revenue. In terms of information, the game plan is to expand its data business, which currently accounts for roughly 40% of SIX revenues.

Data has always been one of the cornerstones of SIX which started providing financial data and services to the industry over 90 years ago. Starting with information on Swiss banks, it now covers an ever-growing range including core reference data on securities, prices, corporate events, environmental, social and governance (ESG), tax and regulatory data. Altogether SIX has a database of over 30 million instruments aggregated directly and in real time from over 1,800 worldwide sources, already verified, structured, interlinked and enriched.

“From a stock exchange perspective, we are looking at how we can leverage across the group and offer a holistic, seamless experience for our clients.” says Leslie whose remit is to develop new services, insights and analytics in the cloud as well as via its established data feeds. She is also working with SIX Digital Exchange to create a unified digital data ecosystem.

“It is not just about having a digital service but how we can effect change,” she says. “We have an opportunity to disrupt ourselves and traditional practices in the way that financial information is distributed.”
Leslie is more than qualified to create an innovative and new vision as well as her governance roles as part of executive boards of SIX and BME. A career in data and technology was not the original plan though. Initially, she wanted to use her German and French language degree, so got a teaching qualification and planned to go to Paris for work.

“However, I saw a sign that said linguists wanted and it was from Reuters who wanted French and German speakers for their office in Devon where I lived and grew up,” she says. “Although I initially wanted to live somewhere else. I ended up spending ten years there working in different roles.”

However, Leslie did have her international opportunity when she was asked to move to Bangalore in India to set up the operation. By the time she left four years later, she was responsible for a budget of $1bn, 2500 people and had a seat on the executive board of the subsidiary. “I moved with a young family to Bangalore and my husband became a stay-at-home dad,” she says. “It was a great experience, and I learned a lot about leadership, cultures and myself through creating a start-up in India operating 24/7.”

Upon her return to the UK in 2007, Reuters had already merged with Thomson and she spent the next 12 years in various leadership roles including global head of fixed income content as well as sales and trading content, and instrument and pricing content. She was then promoted to managing director, pricing and reference services before taking on enterprise at the newly named Refinitiv, which had been Thomson Reuters’ financial and risk business.

After 15 years it was time for a challenge. “My time with Refinitiv and Thomson Reuters was hard to beat but then the SIX job came along, and it gave me an opportunity to run a business unit end-to-end and to have much more senior board engagement,” says Leslie, who will help with the integration as a member of both SIX Group and BME board. “I also liked the idea that SIX has its roots in Europe, but it also wants to increase its presence globally.”

In terms of diversity and inclusion, Leslie says she did not experience any discrimination but “that does not mean it doesn’t exist. I believe that when it comes to the actual experience of women in the workplace, you need to look at the micro-decisions or the unseen acts that add up and impact a person’s career over time: This means looking at who gets what promotion, or is asked to lead a project, go to the board meeting, speak on the panel. Each organisation has a different context and starting point and the intent and sponsorship has to come from the top.”

She adds that increasingly CEOs see it as their responsibility and that at SIX Group there is a commitment to grow the percentage of women on leadership levels to a minimum of 25% by 2023.

Leslie is also keenly aware of her position as a senior woman and role model in the industry. “Progress is being made but it is still painfully slow across the board in term of entrepreneur funding, pay gaps, board and senior executive roles,” she adds. “For me, in a position of leadership and management, it is important to be supportive, open and honest and it is as much my responsibility to help individuals reach their goals as it is to drive change in the industry.”