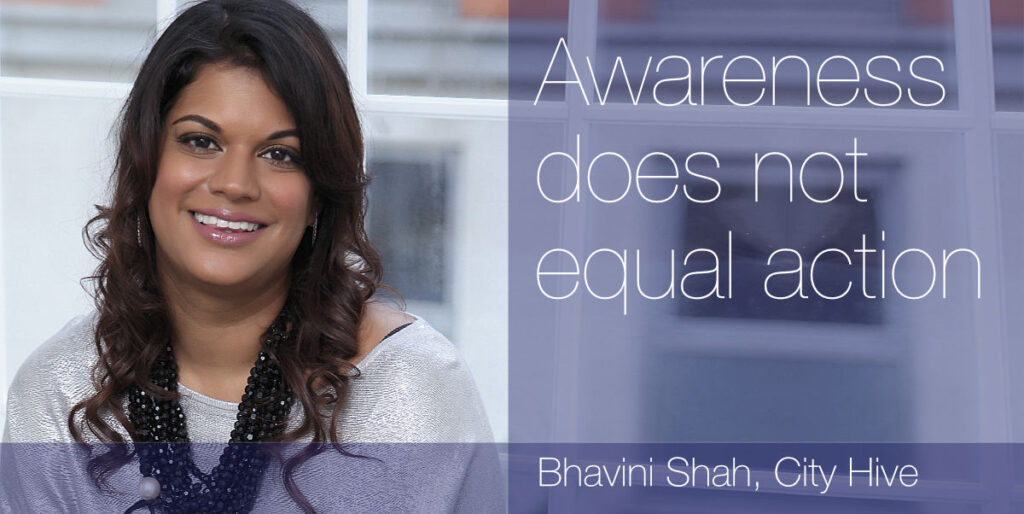 Bhavini ‘Bev’ Shah spoke to Shanny Basar about her career in finance and the catalyst to launching City Hive.

Bhavini Shah, chief executive of City Hive, was inspired to aim for a career in finance after watching the film Trading Places. She hid her culture and anglicised her name to ‘Bev’ to get a job in the City of London.

Shah said: “Being an ethnic minority dyslexic-dyspraxic woman in the City has brought its challenges. I had to learn how to navigate in a workplace where I knew I was different from the majority of people around me.”

Over time she realised her neurodiversity was a ‘superpower’, rather than a hurdle, as it gave her the ability to think completely differently from her colleagues.

As she gained confidence and became more successful, Shah let the ‘mask’ slip and embraced her differences. This background helps explain why she founded City Hive, an independent organisation which partners with companies across the investment management industry to help them create a more diverse, equitable and inclusive corporate culture.

“Up until now there has been limited recognition about the differences between men and women – and instead of looking at how can we change the game so both men and women can play fairly – we have said it’s a man’s game and if you ladies want to play you have to play by our rules,” added Shah.

She set up City Hive in 2016 a few months after leaving her job as a senior multi-manager analyst at Aviva Investors.

“I was made redundant after my maternity leave and had gone through all the usual emotions people have in my position – anger, unfairness, feelings that all I had contributed had not been seen,” said Shah. “I didn’t want to go back to the City because I felt deflated and rejected.”

Shah initially planned to stay at home with her two young children and even splashed out on baking, sewing and crafting equipment before discovering that this now-found enthusiasm lasted “for about five minutes.”

She said: “As much as I didn’t want to go back to the investment management Industry in its current form, I still loved the industry and felt I needed to help change things so set up City Hive.”

The organisation aims to help change behaviour and recruit a more diverse talent pipeline by changing the definition of merit and identifying biases that are a part of decision making.

“Everything we offer at City Hive has to have a tangible benefit at the end of it,” added Shah. “We are not into ticking boxes.”

Shah believes many factors have contributed to a lack of gender diversity at the top of the asset management industry, but one of the main reasons is poor retention of women in the middle ranks.

“Couple gender biases in the workplace with companies unwilling to invest in real solutions to retain this talent and you end up with a limited pipeline of women on the road to senior positions,” she explained.

In a letter to investment management chief executives in September 2020, Shah stressed that awareness does not equal action.

“The lack of tangible, measurable results, demonstrates where diversity and inclusion sit in terms of priorities,” wrote Shah. “Improving diversity, be it gender, ethnicity, LGBTQ, education, socioeconomic, neurodiversity and so forth, should be embedded as a key business objective, not a nice to have once a year on International Women’s Day or when there has been a gross injustice.”

In November this year City Hive launched the Action, Culture and Transparency (ACT) kitemark for corporate culture in the investment management industry. The kitemark provides a framework for companies to address, assess and catalyse an improvement in the culture within their own organisation, and ultimately in the companies in which they invest.

Shah stressed that the lack of diversity in many companies is detrimental for the end-customer as well as for a business’s brand, performance and profits.

“That company is missing out on the cognitive diversity that a diverse workforce would bring,” she added. “All ideas and products would be better with different viewpoints catching any blind spots.”

Marc Teasdale, director of wholesale supervision – supervision investment, wholesale & specialists division at the UK Financial Conduct Authority, said in a speech in September that the purpose of the asset management industry is to act in the best interest of all investors, irrespective of their gender, ethnicity or other characteristics.

He gave the example of the increased use of data science and artificial intelligence to automate decision-making, which can result in discrimination between ethnic groups.

“As these technologies increasingly spread through all sectors of financial services, including asset management, how far could this also be true of your business?” said Teasdale. “What are the ways in which your firm’s culture has the potential to result in different outcomes for different groups?”

Career
After watching Trading Places in her early teens Shah spent hours trying to figure out the mechanics of shorting orange juice futures which involved selling low and buying high, the reverse of the equities market. Her dreams came true when she did her graduate trading at Bear Stearns in New York.

“I got to visit the floor as a guest of Bear Stearns, so not just as a visitor, but actually on the floor of the exchange with those guys in jackets eating White Castle burgers – it was incredible,” she said. “I was this little Indian girl on the floor, and I just loved it. That’s what drew me in.”

However Shah soon realised that being a trader did not suit her skill set and she did not enjoy sitting in front of screens all day.

“For me, being a trader was a bit like getting to the top of the mountain, and then realising there’s no view,” she said. “One of the best things to ever happen to me was being made redundant from Bear Stearns. They could probably see that it wasn’t my bag.”

Shah then joined HSBC Investments and found she was much more suited to being a buy-side analyst, which she described as “the best thing ever.”

“Meeting fund managers, some of the brightest minds in investment, talking to them about their views on the market, and making decisions on who you think are the best investors; that, for me, was amazing,” she added.

She spent the bulk of her career as a fund manager researcher where her dyslexia allowed her to spot things that other people on her team did not.

“I might not be the best at writing a research note, but I think that’s the whole point of having a diverse team; you will have someone who can do one thing, but then you’ll have another person with a different perspective,” she said.

Advice
Her advice to other women in finance is to cultivate mentors and sponsors, both formal and informal, many of whom she met through networking.

“The most successful mentors I have had in my career have been informal mentors,” she added. “People I knew who I admired or looked up to, who I could ask for advice and guidance. I have several, who each bring different skills and traits.”

This year City Hive launched a cross-company mentoring scheme. All the mentors and mentees were trained to help set the rules of engagement and a framework of realistic expectations.

“Hopefully this means our mentees can go on to find other informal mentor relationships that succeed and thrive,” said Shah.

In addition, she said women should not be modest and let others take credit for their work.

“Sing what you have done from the rooftops,” added Shah. “I have made the mistake in my own career where I presumed my boss knew exactly what my contribution was, but I learnt very quickly that they don’t.”

She recommended keeping a spreadsheet, or list, of achievements and extra-curricular projects for the end of year review. Another recommendation is that women play their part in changing the industry.

Shah concluded: “The generation of women before us stuck their foot in the door and I hope the next generation blows the doors completely off !”

Despite the focus on diversity, the Square Mile is lagging behind with privately educated men s ...