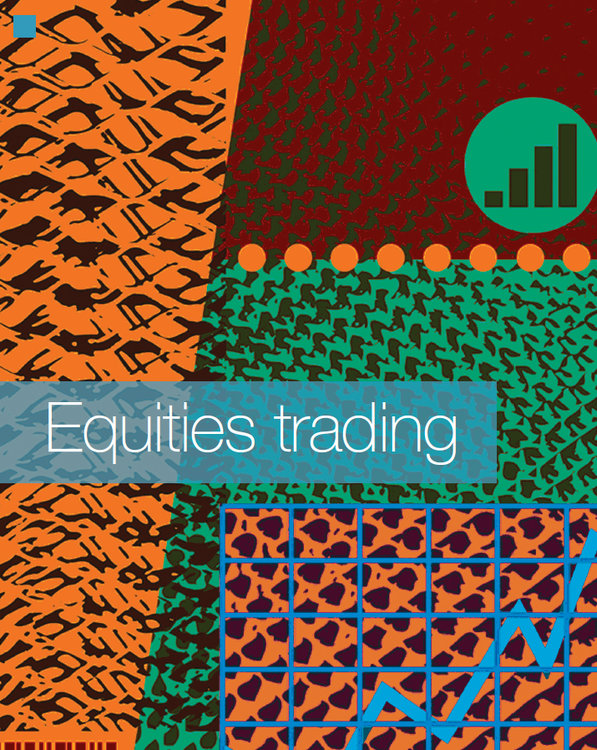 MiFID may want to shine an ever brighter light but traders are looking to avoid the glare. Lynn Strongin Dodds reports.

It is still early days in the post MiFID II world, but the clampdown albeit belatedly on dark pools has not unleashed a surge of trading into lit equity markets. Instead, there has been a spike of activity into alternative venues such as periodic auctions and block trading platforms where the dark pool caps do not apply. 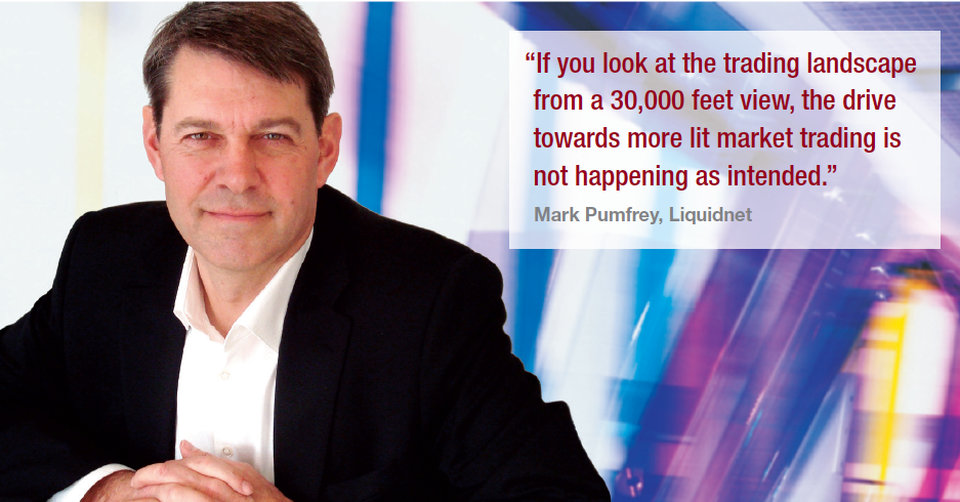 “If you look at the trading landscape from a 30,000 feet view, the drive towards more lit market trading is not happening as intended” says Mark Pumfrey, head of EMEA at Liquidnet. “One of the drivers behind this is that institutions and hedge funds are keen to find the other side of their trades with as little market impact as possible. As a result, they continue to preference trading on dark MTFs above LIS, periodic auctions, and SIs, over the lit markets across Europe.” 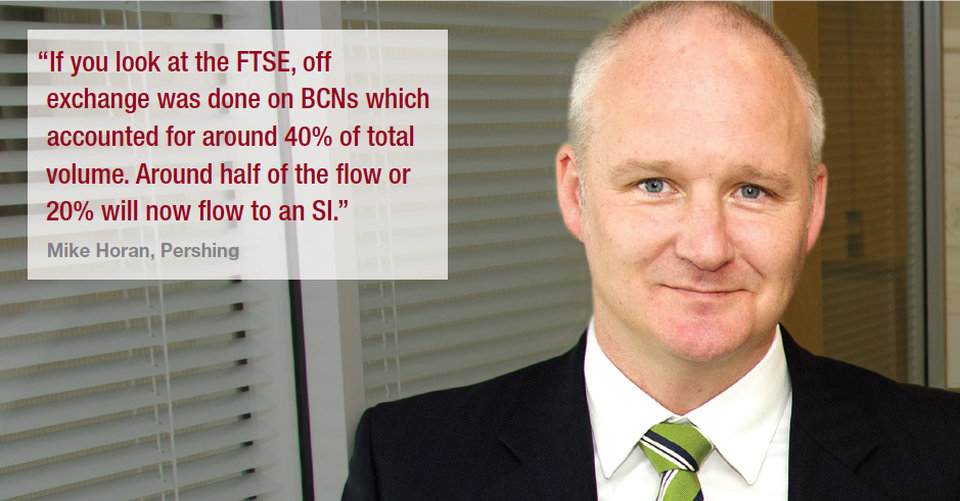 Mike Horan, head of trading at Pershing Ltd adds, “The buyside trades in the dark because of the spread capture and the ability to curtail information leakage. One of the main reasons to trade on these platforms is cost. It has been so expensive to implement MiFID that the focus now is on saving money and looking at execution costs. The result is that we will see a continued move to periodic auctions and LIS type of trading. At the moment there has been trading in the higher bands but I expect to see more activity in the smaller bands as time goes on.”

The migration started last year as market participants tested the waters. The benefit of periodic auctions is that under MiFID II they enable traders to hide their orders until there is enough volume to trigger a trade. As for LIS, those who qualify for the waiver are exempt from both the calculation of the caps and any subsequent suspensions of dark trading. Thresholds have been set according to how much the stock has traded. For the least-traded, a block of just 15,000 euros counts as large in scale while for the most actively traded – shares with volume of more than 100 million euros a day – the threshold is 650,000 euros. In the past, the use of LIS was more mixed and depended on the algo strategy being employed.

A study conducted last year by TABB Group shows that on-venue trades meeting the LIS thresholds in European equity markets accounted for 22% of all dark MTF trading in the third quarter of 2017, up from 12% during the same period in 2016. The value of LIS trades increased 108% over the same period, from €24bn to €50bn. The research consultancy predicts the market will double again over the next 12 months, accounting for half of all dark MTF trading by the fourth quarter of 2018.

The Thomson Reuters March Share Reporter reflects the continued direction of travel. Although the double volume caps (DVC) had just made their debut, trading in dark pools halved to 3.06% market share of on-book trading from 6.15% for the period between 2 March and 16 March. By contrast, periodic auctions doubled their share of on-book trading from 0.64% to 1.23% during the same time frame.

One of the biggest winners was Cboe Europe’s periodic auctions book which set a new one-day high of 582.8m in mid-March, surpassing its record month of volume in February where average daily notional value reached €353m. This represents almost a fifth more than in January this year. Overall volumes hit new highs on Cboe as well as Liquidnet, Turquoise and Euronext Block. Reports showed that the proportion of block trades to the whole dark trading volume rose to 44% the week of the 19th March from 42% the week before. 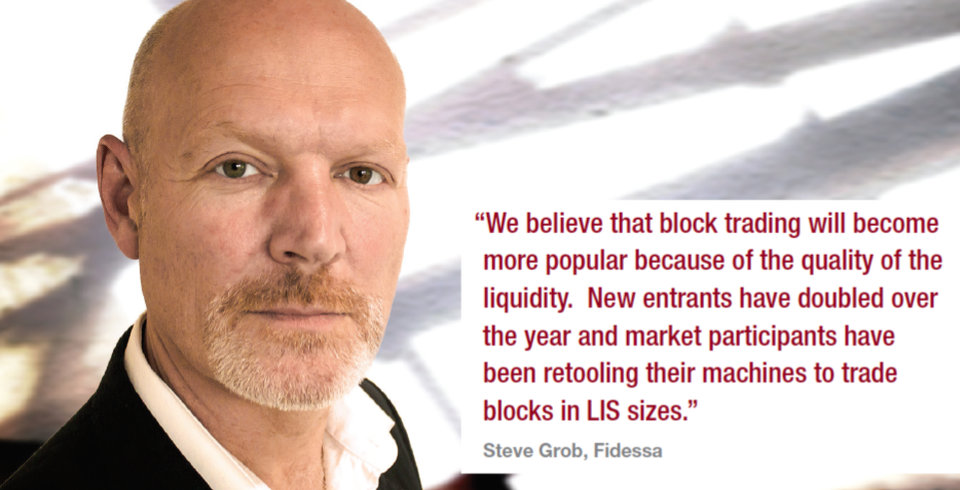 “We believe that block trading will become more popular because of the quality of the liquidity,” says Steve Grob, director of group strategy at Fidessa. “New entrants have doubled over the year and market participants have been retooling their machines to trade blocks in LIS sizes.”

The introduction of the DVCs was delayed for roughly two months due to a lack of complete and quality data from exchange operators to calculate effective caps. After the European Securities Market Authority (ESMA) crunched their own numbers in January and February, it published the names of 755 securities that were to be subject to the DVCs until 12 September 2018. Although that represents less than 5% of the total instruments traded in the European market, it covers some of the largest and best known names ranging from all of the FTSE 100 banks such as heavyweights, HSBC, Barclays, Standard Chartered, Royal Bank of Scotland and Lloyds as well as corporate giants Unilever and Nestle, British Tobacco.

Back in the game

Another potential game changer in the equities space is the arrival of the systematic internalisers (SIs), which do not have to publicly display prices for trades larger than the standard market size. They are not a new concept and were originally introduced in the original MiFID directive for all off-venue equities trading in the European Union. However, they never gained traction and only nine banks signed up with very few trades passing their way.

The preferred option became the broker crossing network which allowed the sellside to transact significant volumes internally and to match order flow. However, they have been eliminated under MiFID II and trading across asset classes is only eligible on a regulated market or traded on a regulated market, MTF or SI.

A report earlier in the year from ITG showed that roughly 100 banks and electronic liquidity providers (ELPs) have registered as SIs across different asset classes. Canvassing the European landscape, the agency broker found that out of the over 50 buyside institutional investors surveyed, the majority or 88% expect there will be fewer than 10 relevant ELP SIs in operation by the end of this year, while 42% expect there will be less than five.

The survey found that the most popular venues were likely to be bank run operations with around two thirds of traders anticipating interacting with bank SIs in the first quarter of this year versus fewer than 40% for ELP SIs. To date, most of the behemoth banks including Goldman Sachs, Credit Suisse, UBS, Deutsche Bank, Barclays, Bank of America Merrill Lynch – some of which have been listed on the register since MiFID I – started to operate SIs ahead of MiFID II. 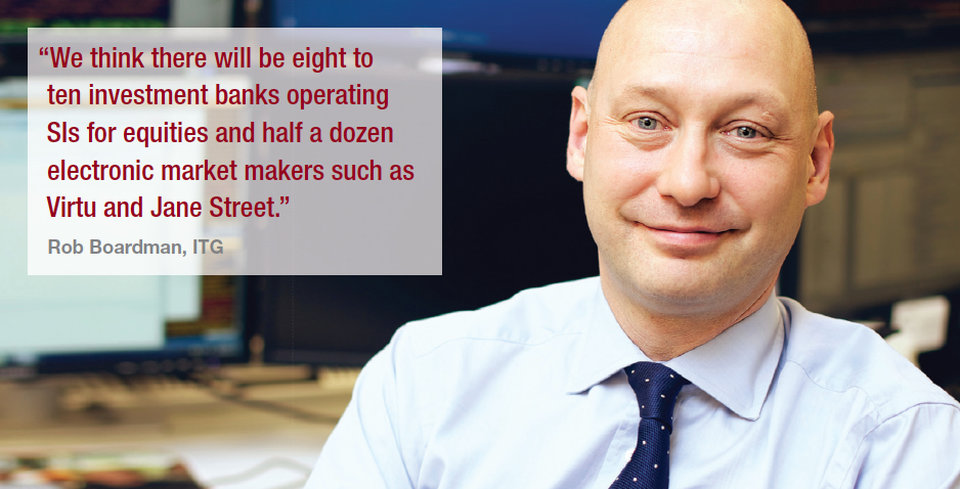 “We think there will be eight to ten investment banks operating SIs for equities and half a dozen electronic market makers such as Virtu and Jane Street” says Rob Boardman, European CEO of ITG. “However, the issue is that some of the SI operators may see themselves as aggregators of liquidity and send the orders directly to MTFs so that their clients are not subject to trade reporting requirements.”

Horan adds, “If you look at the FTSE, off exchange was done on BCNs which accounted for around 40% of total volume. Around half of the flow or 20% will now flow to an SI. One of the questions going forward will be what market share will the high frequency trading firms like Virtu capture. If they are too successful, will new regulations come in to curb their activity? The conundrum is that while SIs will offer a decent source of liquidity, there is still a belief that more trading should take place on and not off exchange.”

Adam Toms, CEO Europe of OpenFin also believes that the SI regime will be one to watch for ESMA as well as the Financial Conduct Authority. For now, “I think that traders will look at the risks posed by the different venues before executing orders,” he adds. “In general I expect to see the next generation of tools as people are blending their high and low touch technology and services together to achieve the optimal best execution outcome.”